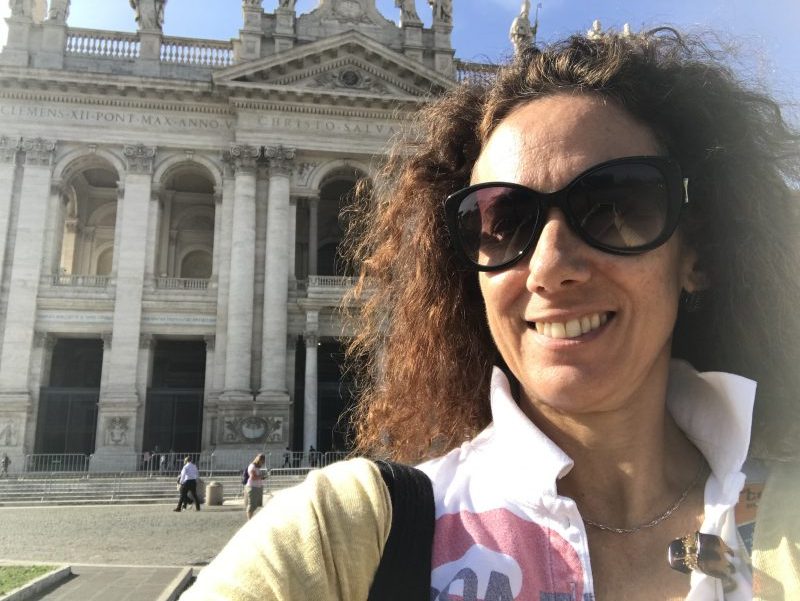 Some of you call me the “church girl”, no wonder, I must’ve seen heaps of them in Rome, don’t you think? I flooded my social media, some friends would say, “I see you’re still in Rome, I’ve seen a church on Instagram”, well brace yourselves.

I already told you about two of the most important ones, San Pietro di  Vaticano & Santa Maria la Maggiore, so today I’ll talk about another VIP church, the Cathedral of Rome, San Giovanni in Laterano, which holds the title of Mother of all the churches & World Heritage, the boss. 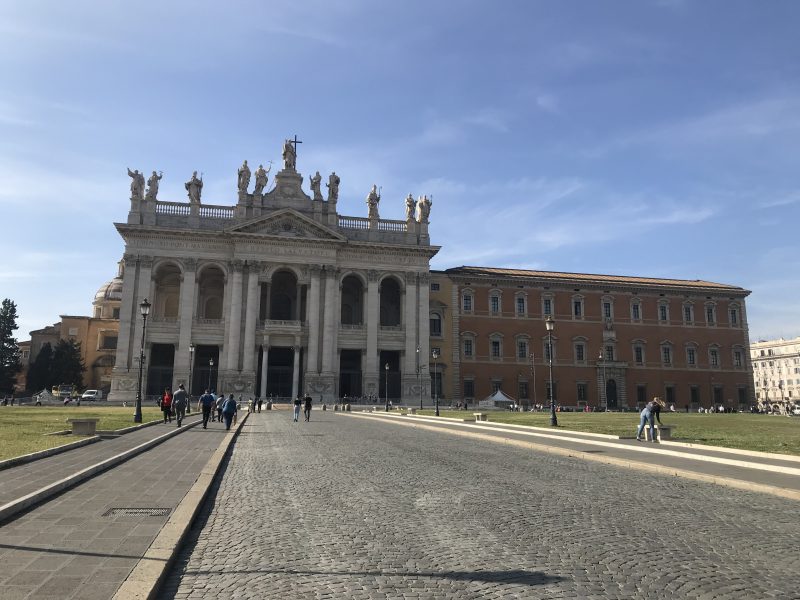 The basilica used to be a palace during the 3rd century, that ended up in the hands of Constantine I right when he won the battle that allowed him to walk under the arch which bears his name, the one told you about . 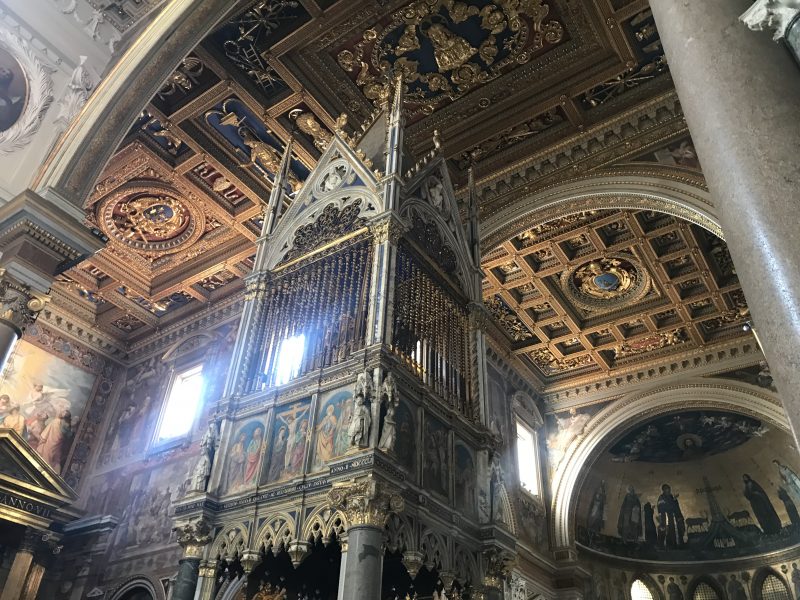 In the XVII century Borromini gave it the Baroque touch that has today. As it is a grand basilica it must house relics, & yes it does, the heads of Saint Peter & Saint Paul & the tomb of San Giovanni. 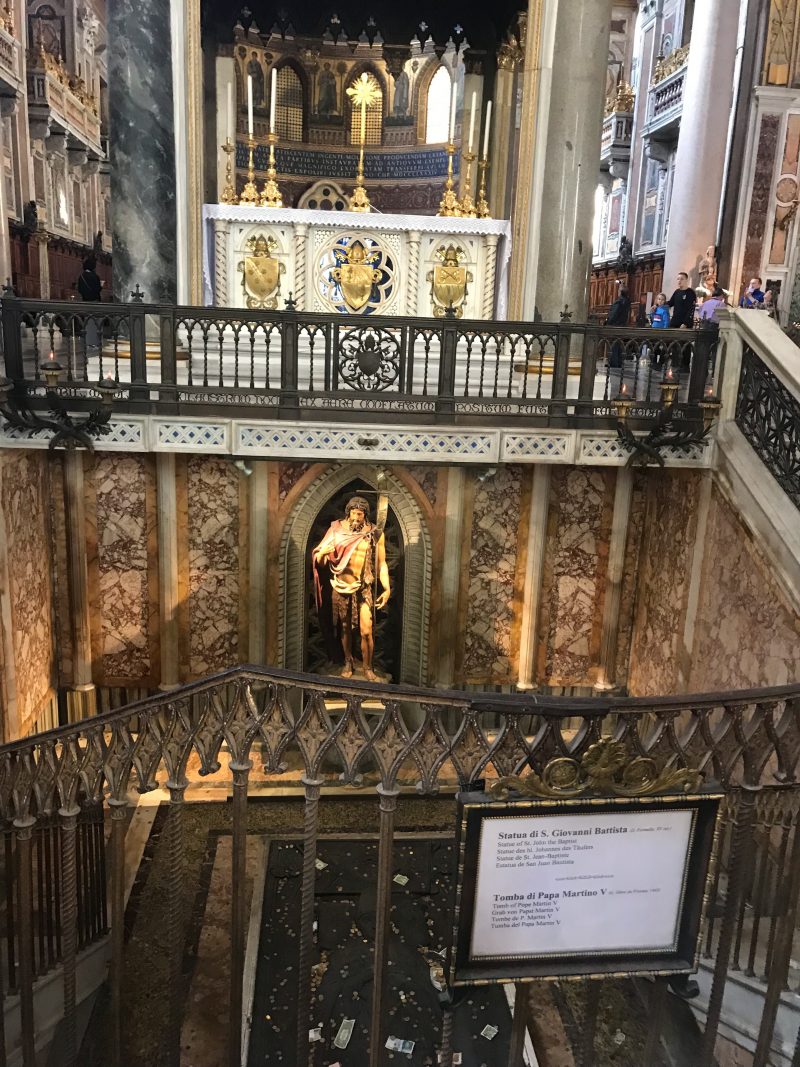 What surprises me the most it is the magic lighting show it has; when I was near the altar at noon, I turned around to see these beams of light coming from windows located very high up on the walls,  shining on the six splendid statues of the twelve apostles that stand on each side of the main nave. 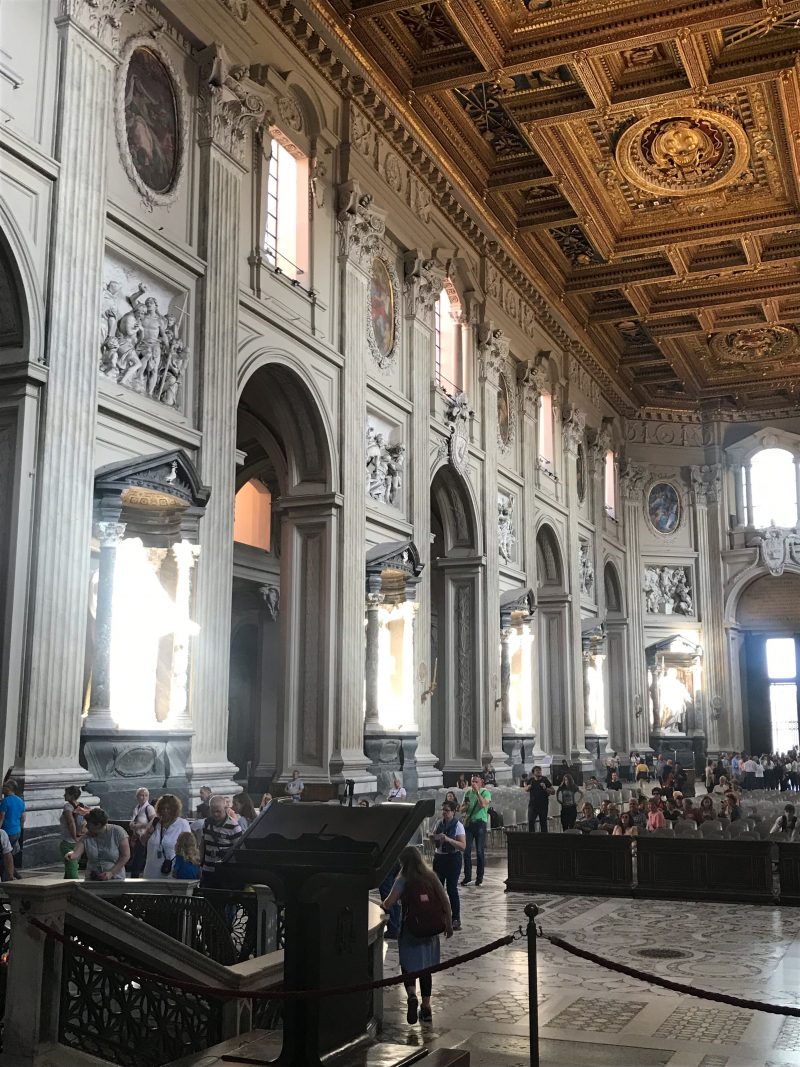 I am not surprised the believers, who in those days didn’t know how to read nor write, would see this experiences as miracles & divine signs. Divine were their creators, it still amazes me how they built these temples & how beautifully they decorated them. 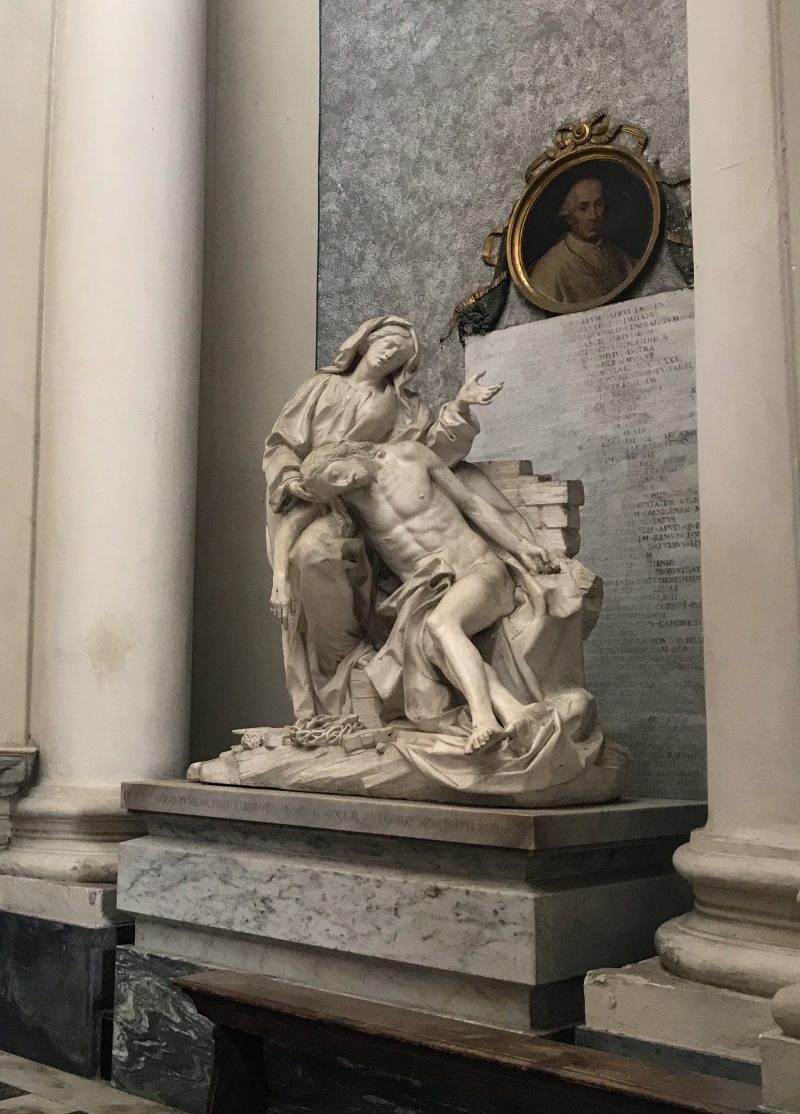 San Giovanni is also one of the seven main churches pilgrims visit when they come to Rome during the Holy Year & one of the four papal ones, along with San Pietro, Santa Maria la Maggiore & San Paolo Fuori le Mura.

To the left of the grand basilica there are the Holy Steps. Santa Helena, mother of Constantine I, was who brought them to Rome in the year 326. 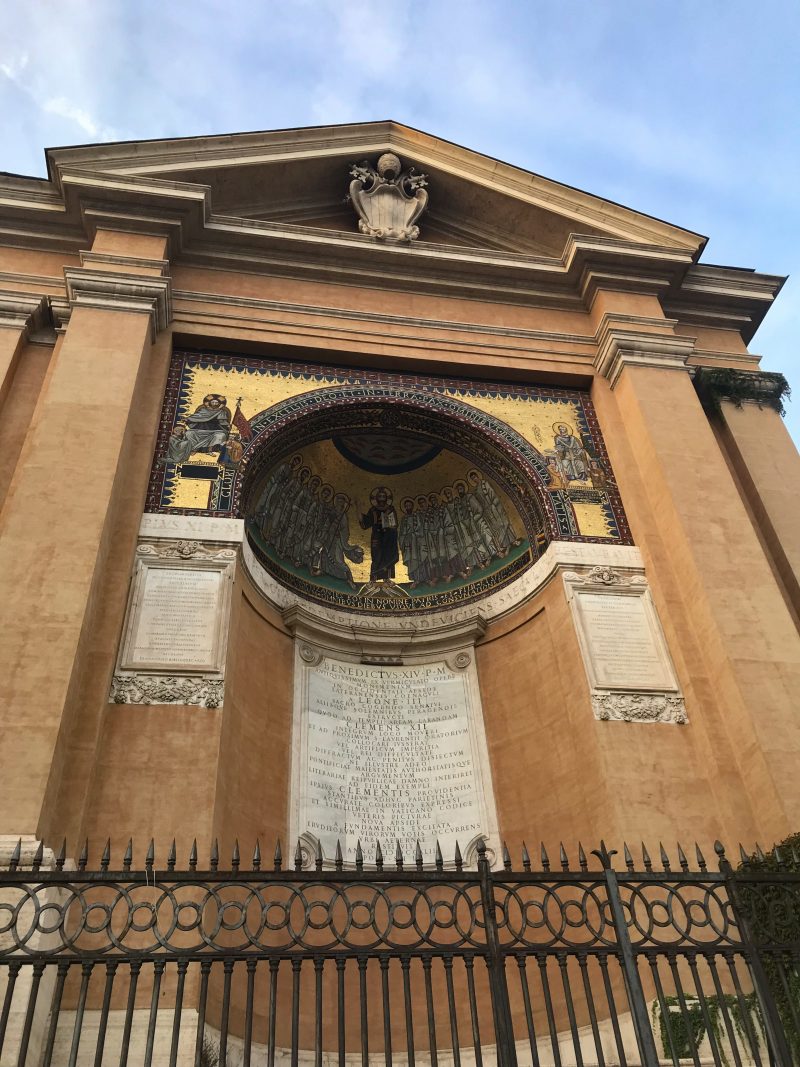 They are a flight of 28 stairs from the Poncio Pilatos’ palace that Jesus walked up on his way to being judged. The tradition says that the believers must go up on their knees, saying a prayer on every step, I did, as the saying goes “when in Rome, do what Romans do” Out of respect photos cannot be taken, these are the beautiful next door ones, for anyone who want to climb them on foot. 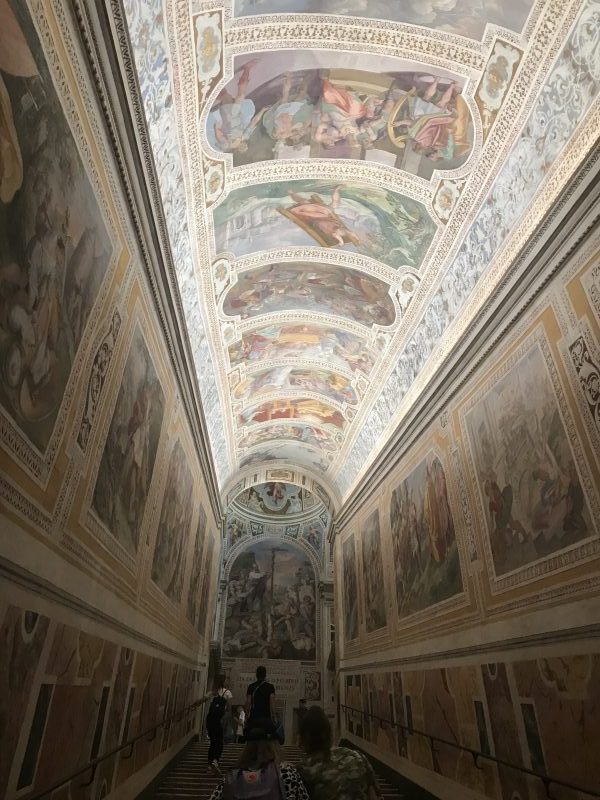 The closest metro station is San Giovanni, which is right next to a very long city wall & its gates. I think it’s wonderful to walk around a modern city with these kind of touches, an old wall here, a ruin over there. 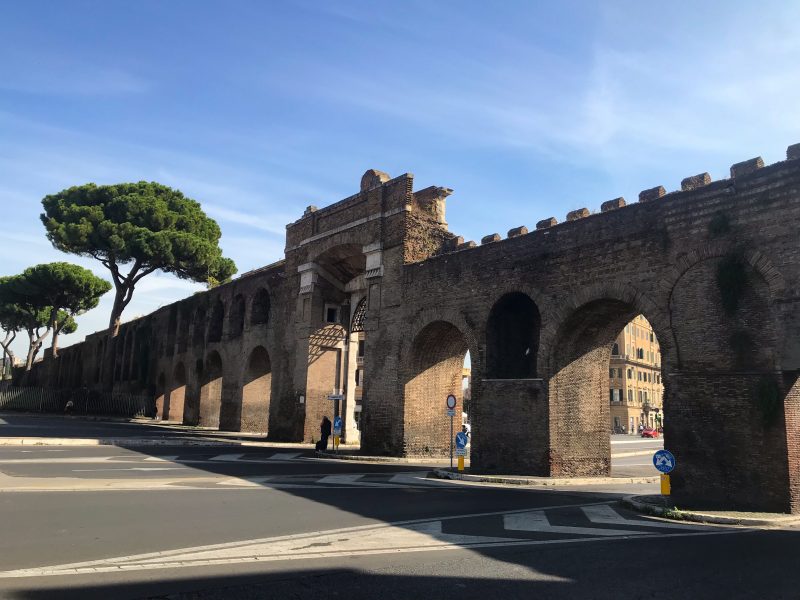 I followed the wall to find another church, another of the main ones, the basilica of the Santa Croce da Jerusalem. 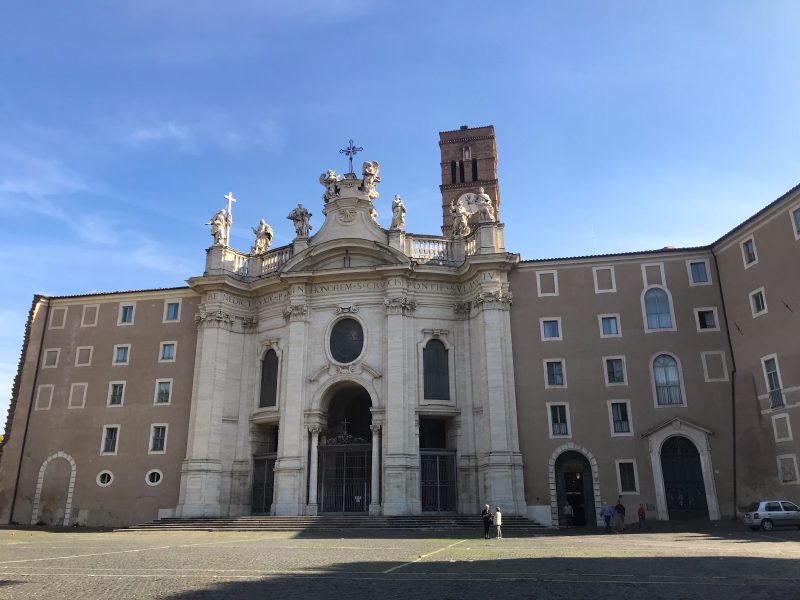 It is also the one that houses the most relics of the crucifixion. Again Santa Helena brought the seven of them from Jerusalem, they consist in parts of the Holy Cross, parts of the cross of one of the thieves, the sponge, the crown, nails & part of the INRI inscription. 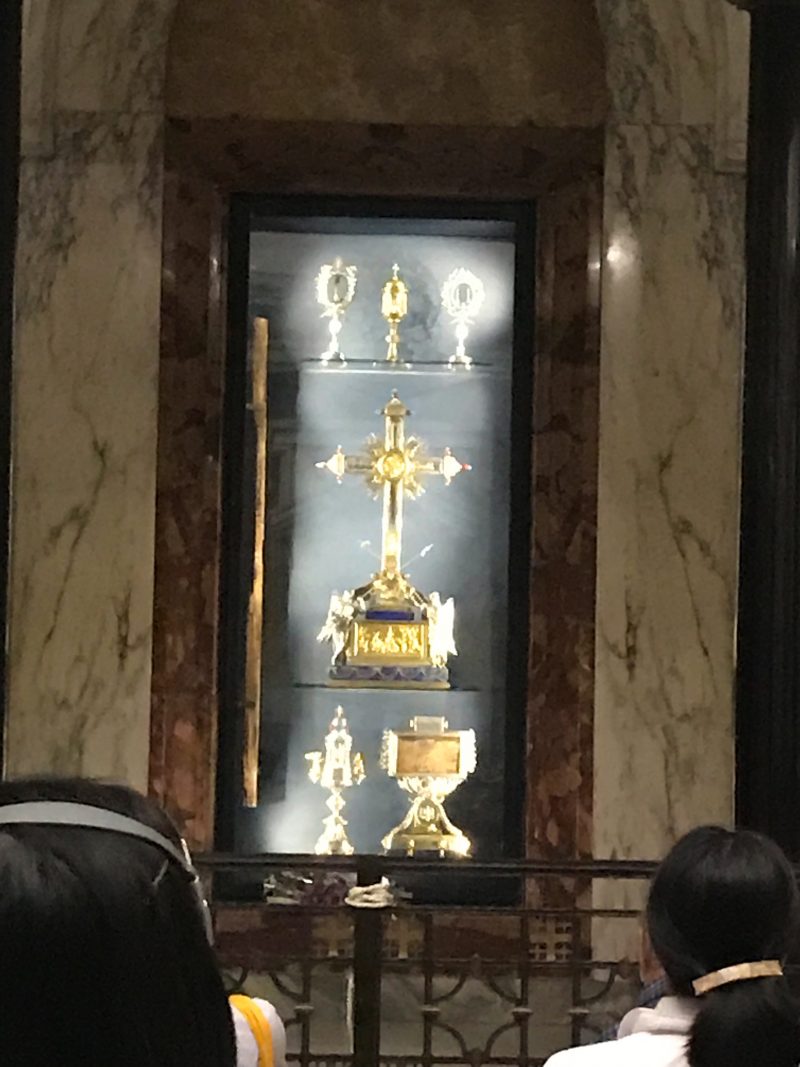 The frescos are wonderful, I love this blue colour. 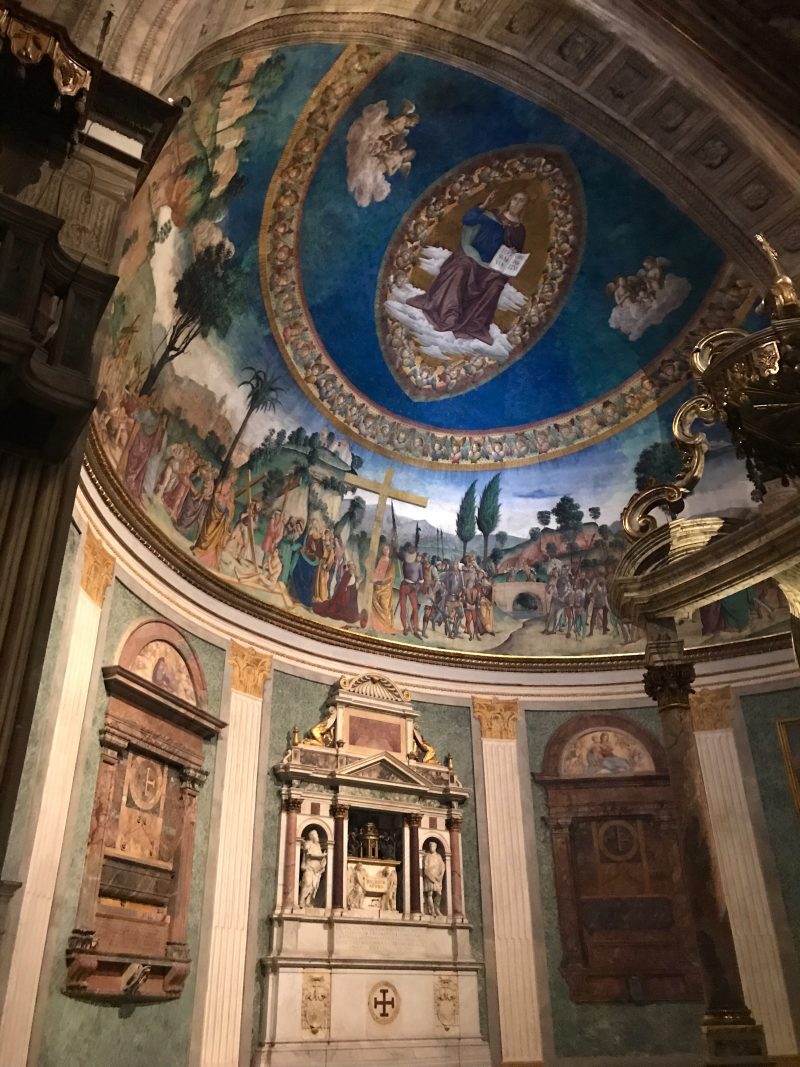 You’ll be happy to know that up to here is the first post about churches, are you praying so I don’t write anymore? I must tell you about them, even if it is only a little mention, many of them hold so many pieces of art that you cannot visit Rome & not see

It’s only left for me to tell you about the third & last book of the Africanus trilogy, “The treachery of Rome” by Santiago Posteguillo in which he narrates how Scipione is now a very well known general, the only one who has defeated Hannibal. Scipione has achieved a lot of political power too, the Roman people love him, not so much Caton, the disciple of his political enemy Maximus & opponent in the Senate. Caton will do anything to get rid of Scipione & all his linage.

Meanwhile in Carthage, Hannibal becomes part of the Board of this country, he doesn’t agree with their methods extortioning the people to pay the taxes to Rome, whilst the rich don’t put any money out of their pockets. Therefore the Grand Board wants to handle him to Rome, but he escapes & it’s then when his life in the exile starts. He’ll collaborate with a king & his invincible army; army who will fight against the Roman legions commanded by Lucio, Scipione’s brother.

Another very enlightening & entertaining reading. When I started this trilogy I thought it was going to be full of endeless battles, but it hasn’t, many are narrated, but from the point of view of the strategists these great generals were, the author gets in their minds & the minds of all the characters, transporting you to that exciting Rome.

This is the last book of the saga, here we learn the end of these two awesome generals but, I know this writer has got more books in Roman history, will I read them? Stay tuned as I’ll soon let you know. 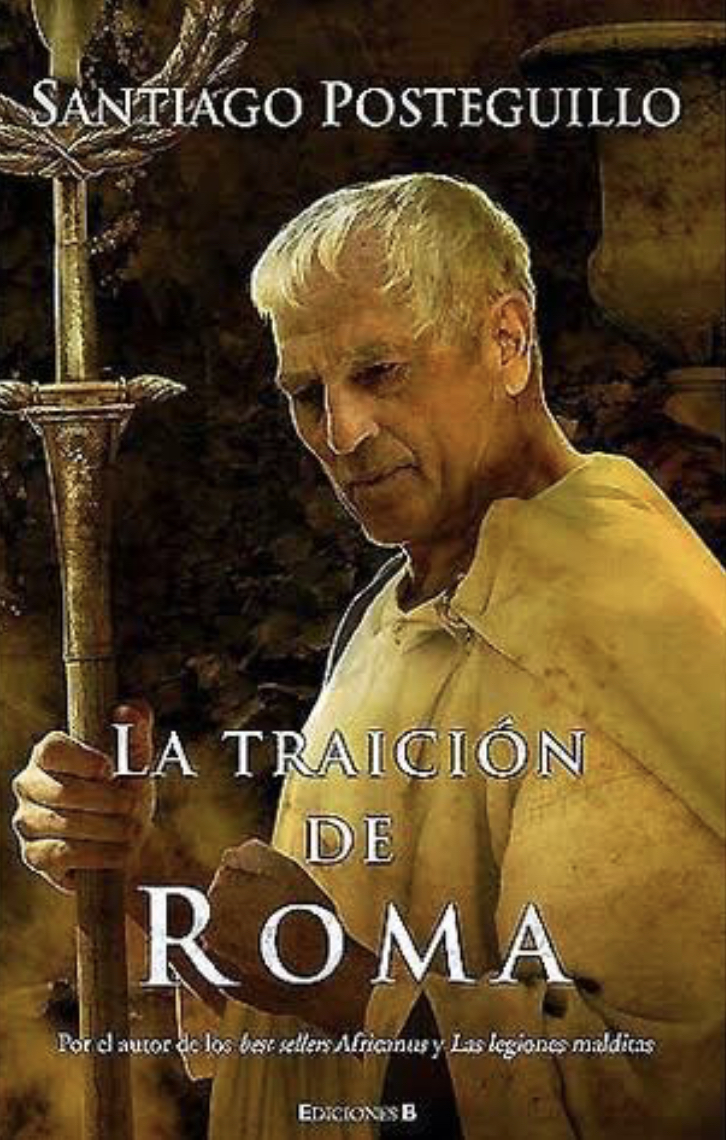