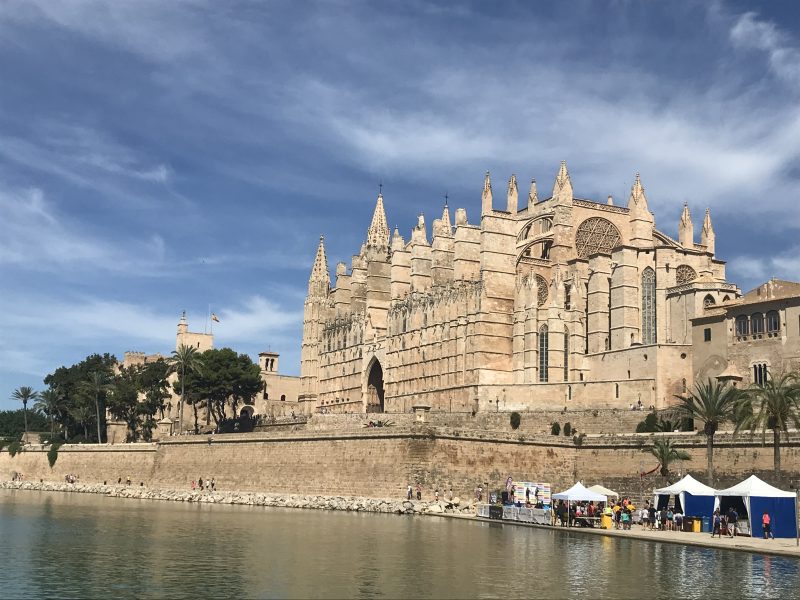 On the 2nd of April many years ago I appeared in this beautiful city bathed by the Mediterranean.

Where the sea brings the traveler who is welcomed by its iconic Gothic Cathedral, La Seu, majestic and imposing since the XIII century. Its Gothic eye, one of the biggest rose windows in the world rewards us twice a year with a spectacle of light. The sun shines through the window and makes the figure of an 8 with the rose window located in the west side of the cathedral. ABSOLUTELY DIVINE. 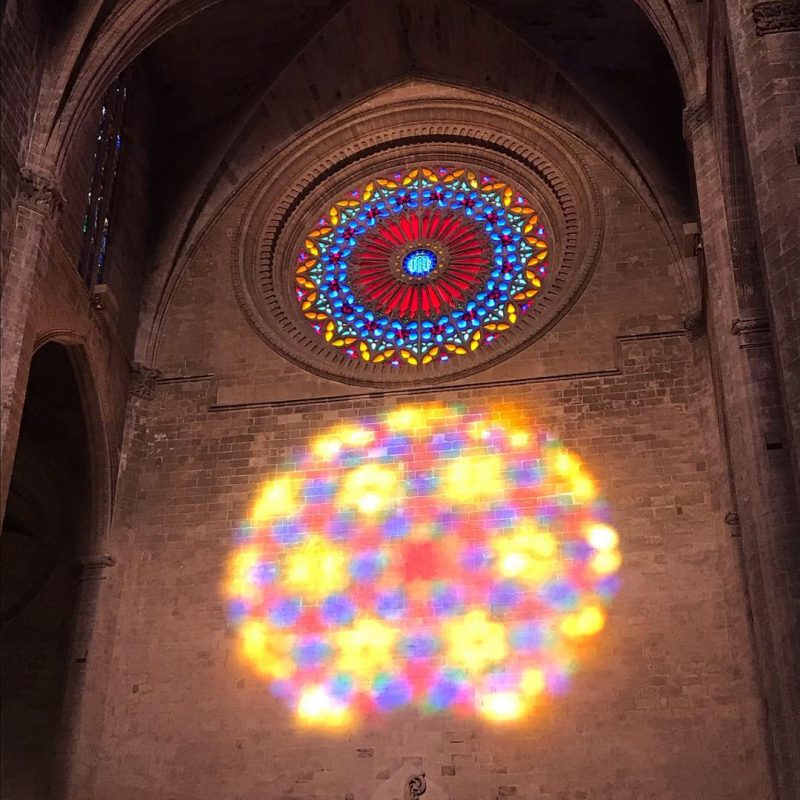 Her style has evolved throughout the centuries, being Gaudí and Barceló, two of the last artists to leave their print in her (yes, she is alive). They call her the cathedral of the sea, light and space. I invite you to check for yourselves why my dear nomads. 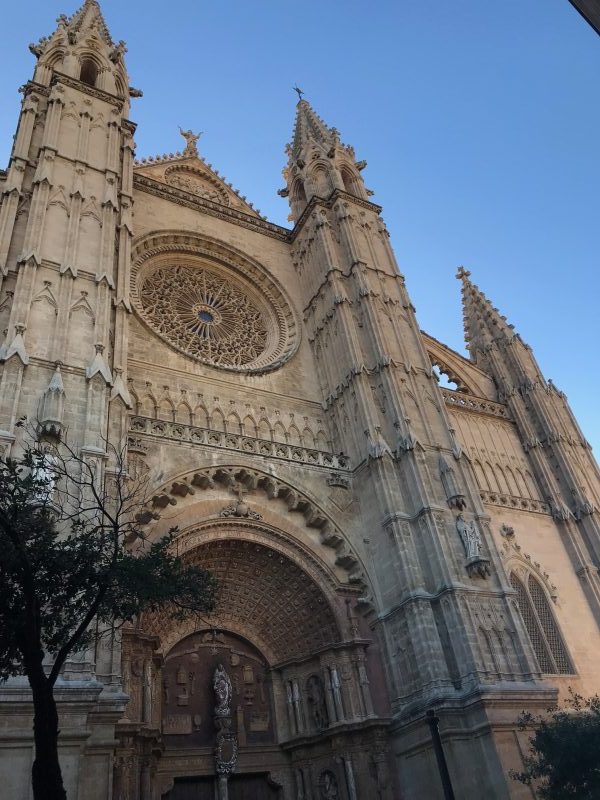 Opposite to this beautiful structure is the Royal Palace of the Almudaina, home of kings & queens that these days holds celebrations with the dignitaries of the country, when the Royal family is on the island during the summer. 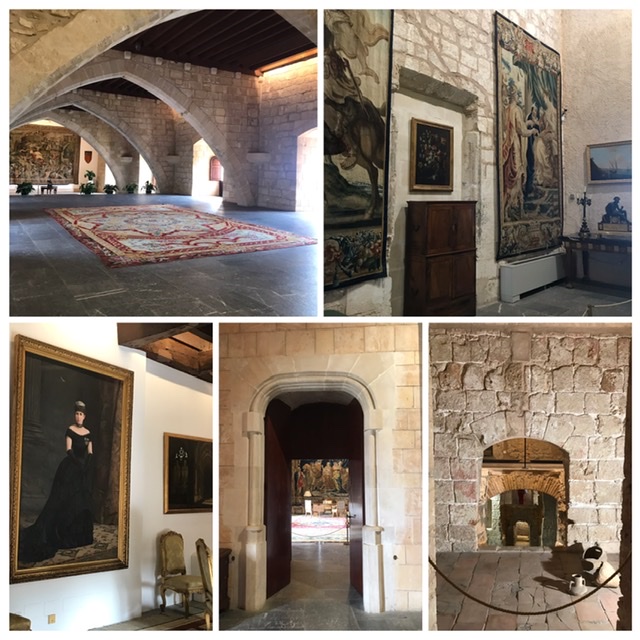 It was built in the 13th century on an old Almoravid palace, the different kings have modified it over the centuries. Its big halls, Arab baths, hearth hall, the queen’s office … all its spaces breathe medieval royalty, if only walls could speak… 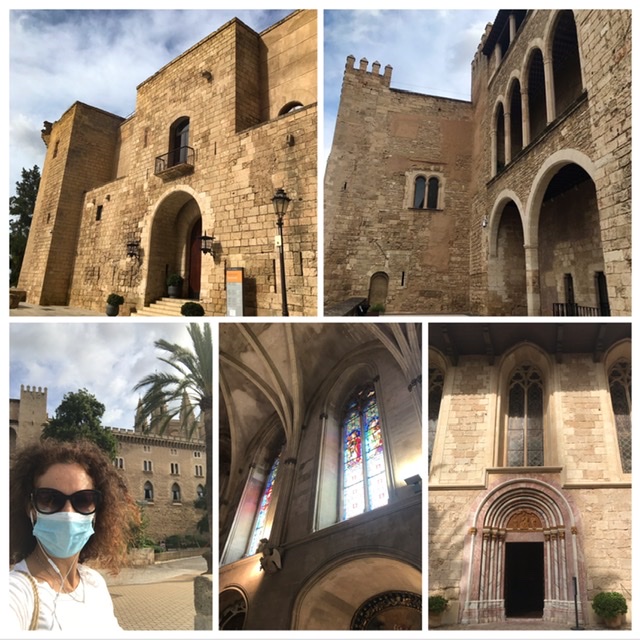 Next door there is La Lonja, where the fishermen used to take the catch. It is also an enchanting neighbourhood full of bars and restaurants. One of the most popular ones amongst the visitors who wonder our streets is the Abaco, a typical stately Majorcan house where you’ll be able to have a cocktail in front of the chimney or in its small, but adorable, patio.It only opens in the evenings. 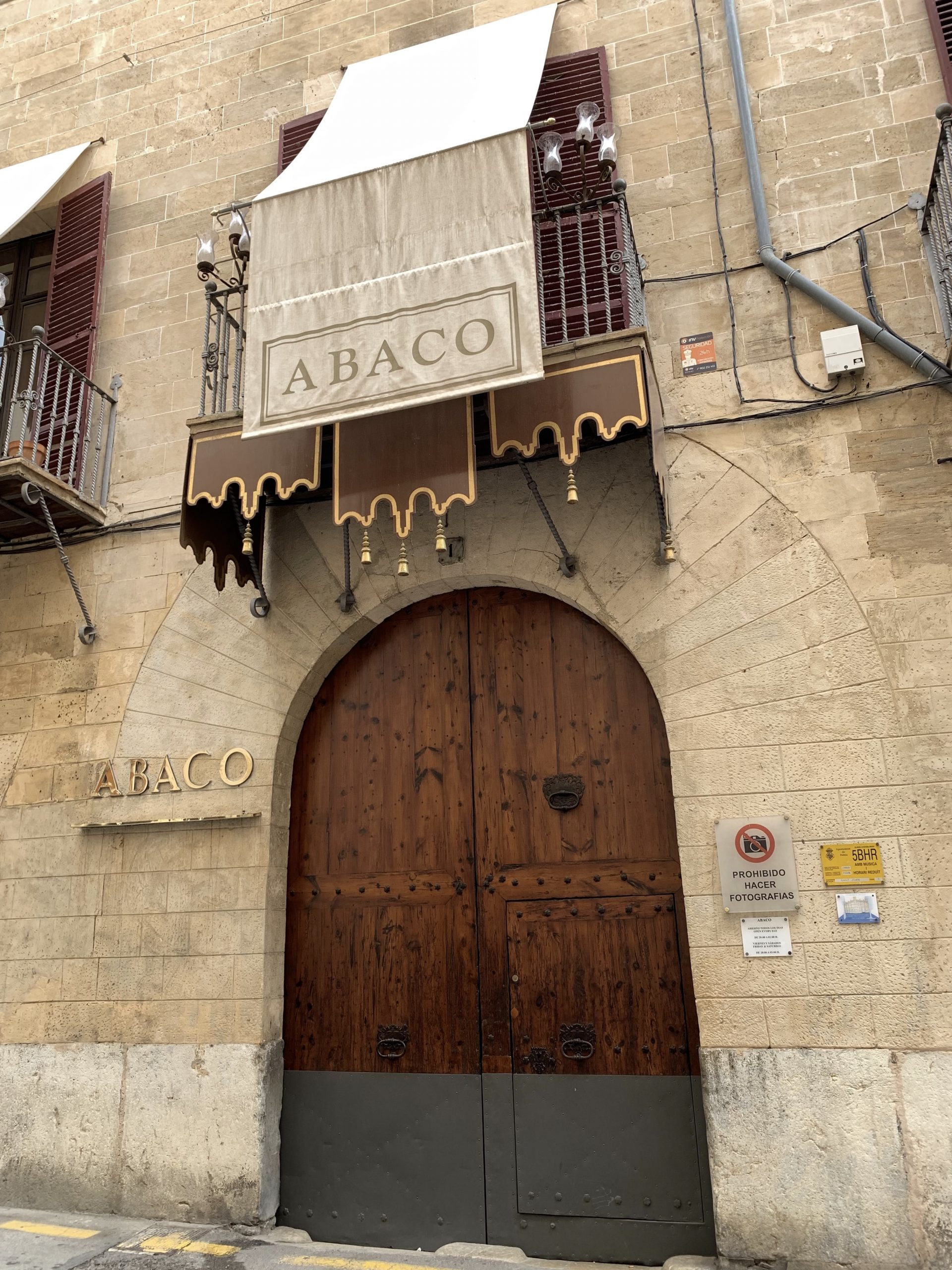 Behind La Seu and La Lonja you’ll find the old town, with its little streets that lead to different plazas (squares). In one of them is the Town Hall, or as we call it Cort, the same as the square. If you enter it you’ll find various giants, & some other oversized headed figures which appear in the traditional city festivals.

The facade has a bench called “sinofós” if it wasn’t, the word says that when people at leisure were sitting there, the passers-by would ask them “why are you not working?” and the answer was always “if it wasn’t because of the heat, or the pains or … ” out of all the excuses this nickname came out. I also encourage you to find the little lizard and snail, they say they could’ve the symbols of the nicknames of the master builders who built the building between 1649 and 1680. 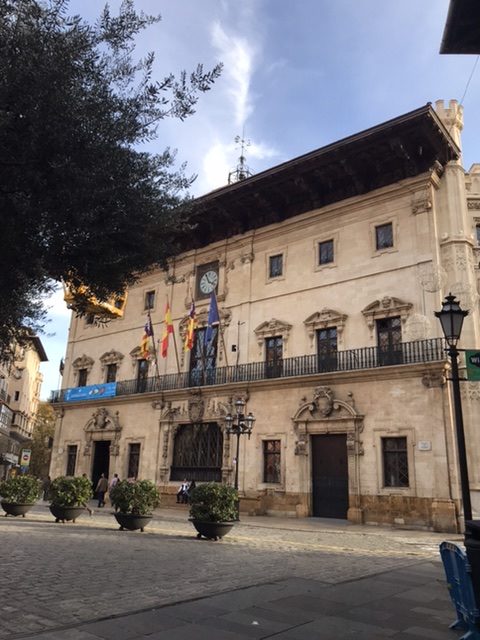 Next door are the Palau Reial and the Houses of Parliament, (yes, we do have them here too). They open their doors once a year, in September, when La Nit de l’Art is on. I love that night, all the art galleries open their doors till midnight & the center of the city vibrates with life. 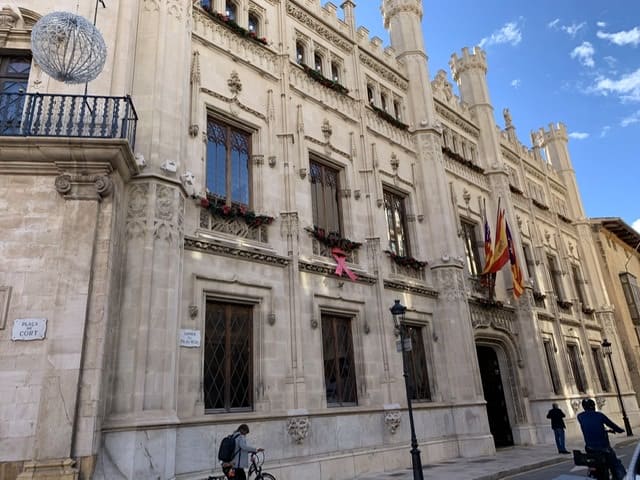 In one of the corners of Cort, well known thanks to the olive tree of its center, is one of the modernists buildings I’ll show you, Ca’n Corbera, downstairs is the cute Fornet de la Soca patisserie. 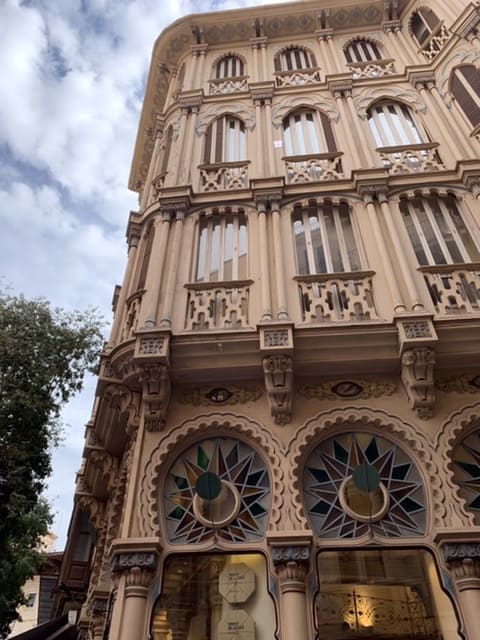 Entering the old town we reach the Arab Baths, dated from the 11th century, the 12 columns of the hot room is what has remained of what it thought to be part of a palace of a Muslin nobleman. The fee is 3 euros. 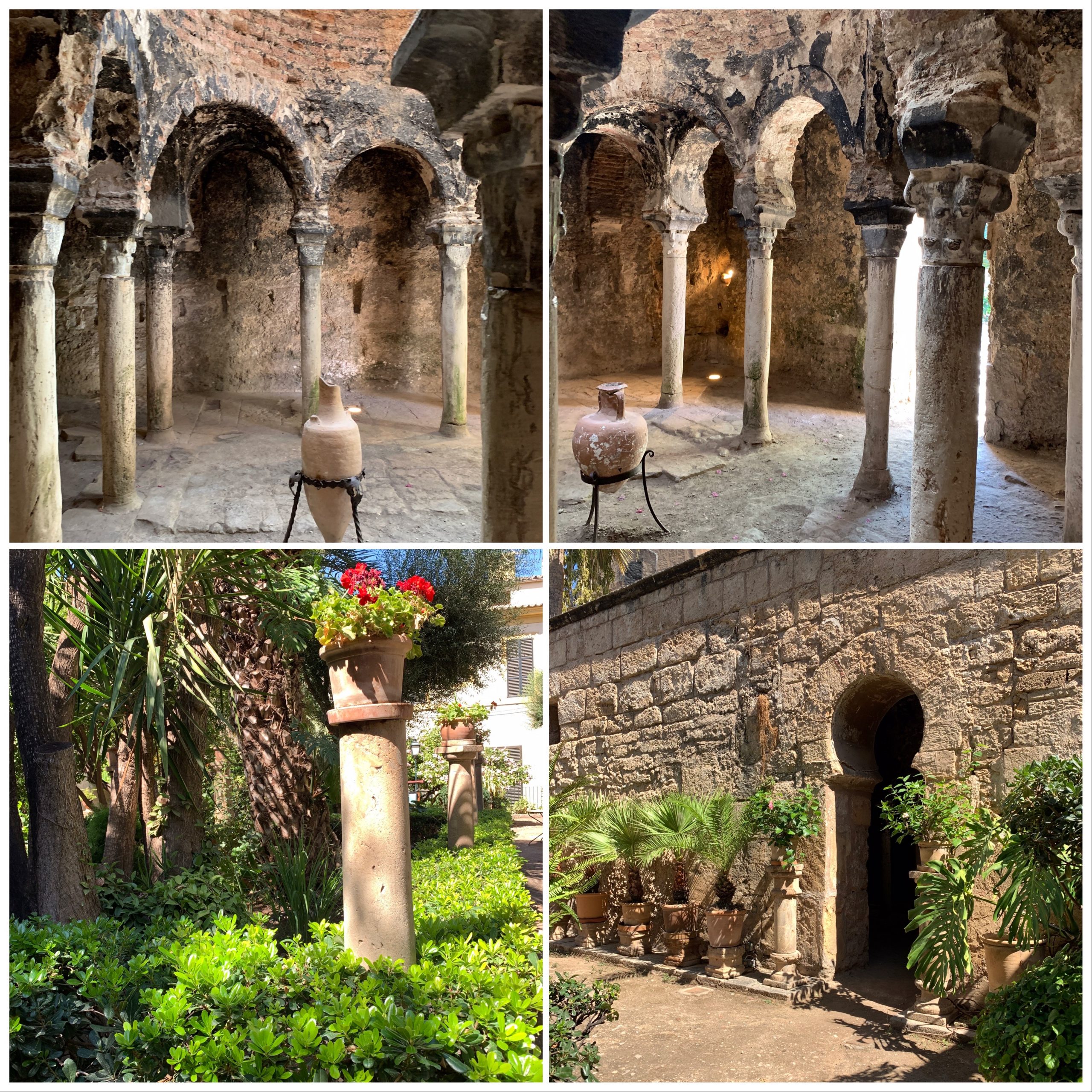 The little narrow streets of the historical center take us to San Francisco, name of the square, the church and the school. The church was also built on an old mosque and it is the second biggest after the cathedral. 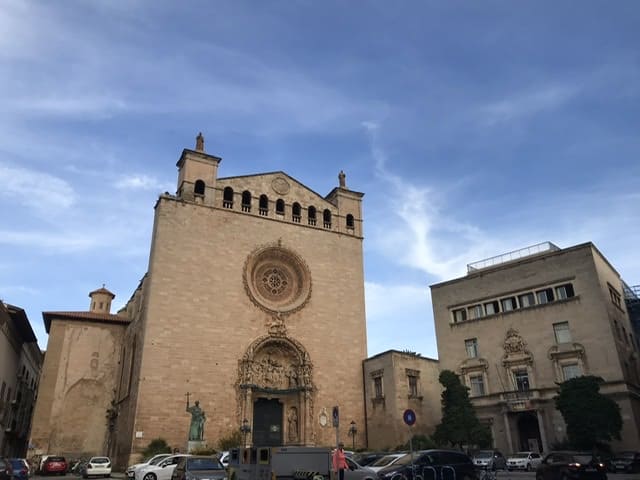 Next to it there is the second nice modernist building, Caja de Ahorros, pretty, eh? 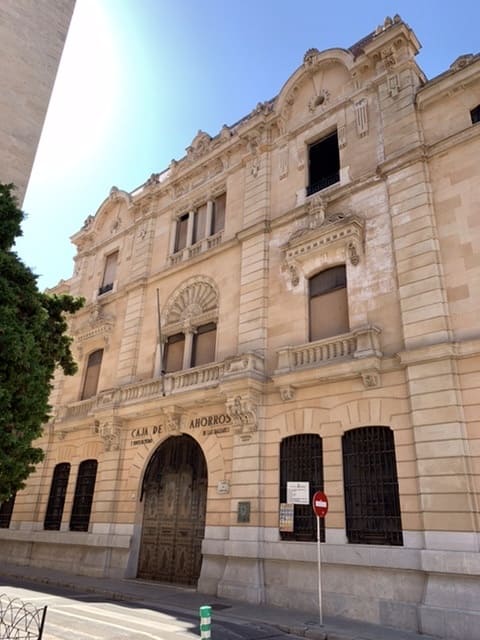 Behind the church there is another square, Plaça del Quadrado, there is also C’an Barcelo, another beautiful example of modernism, check out the windows and the tiles. 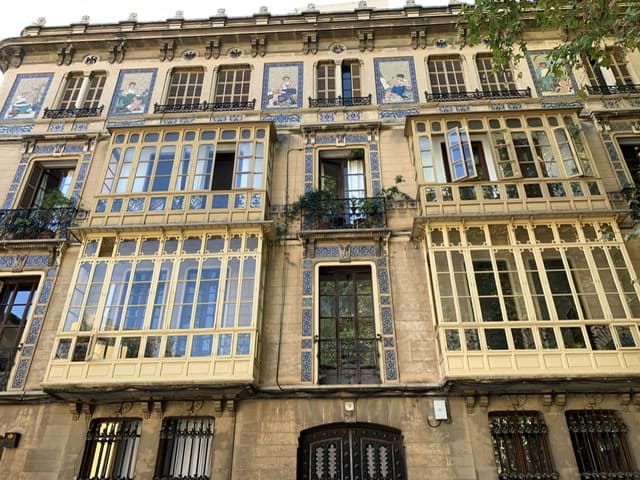 Close by there is also the church and square of Santa Eulalia, built in 900, quite relevant in that time as they crowned James II there. 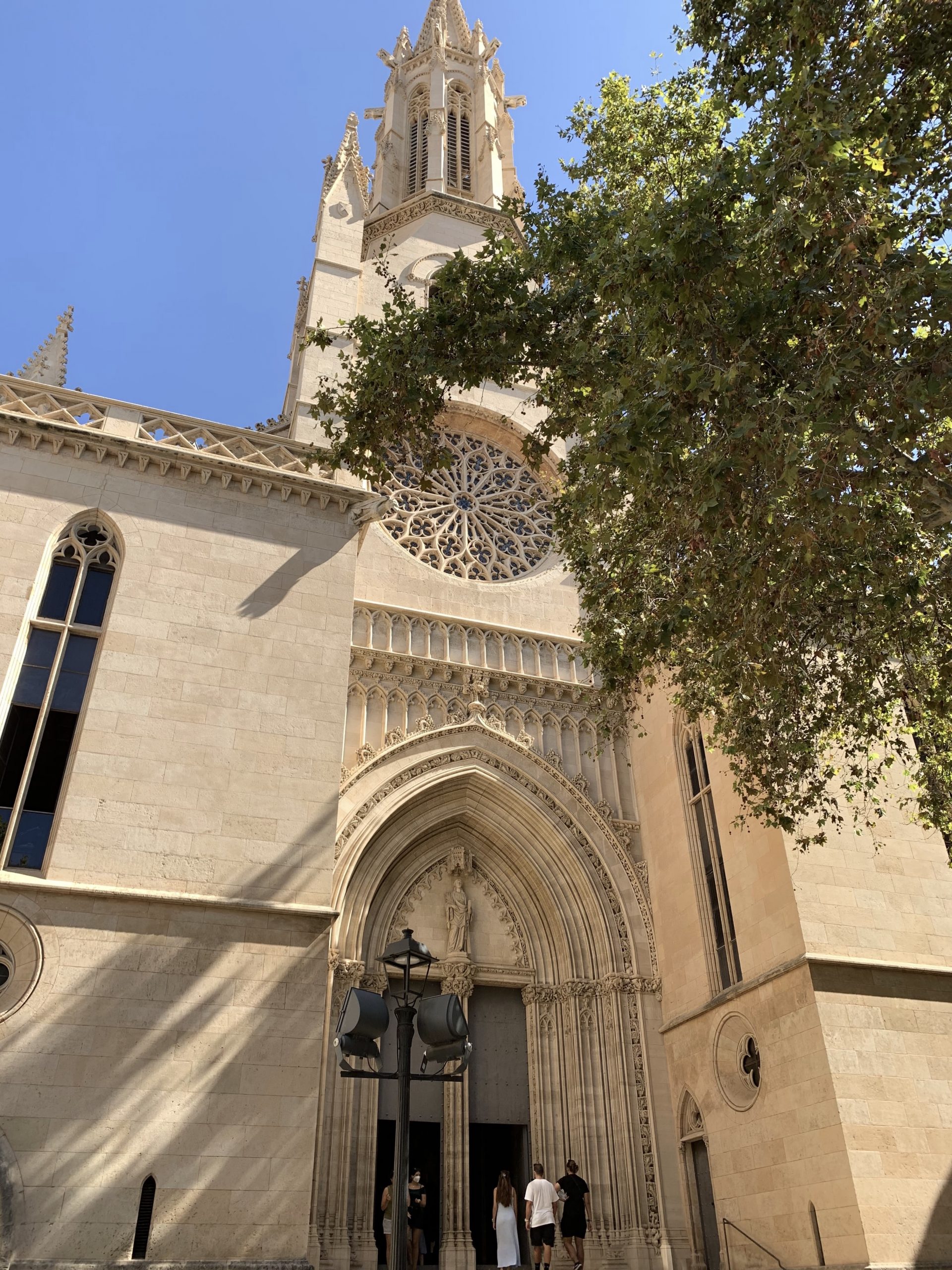 Behind is Can Sanç street where the emblematic chocolaterie Can Joan de s’Aigo is since 1700, there you’ll be able to enjoy a Spanish hot chocolate, which is very thick & goes very well with a quarto, sweet soft cake, or the typical ensaimada.

Although if you fancy an ice cream, forget about the cone, here they’ll serve it to you in a glass. Did you know that the first ice creams of the city were born right here? The first one they made was almond ice cream, you can see the pump they used. 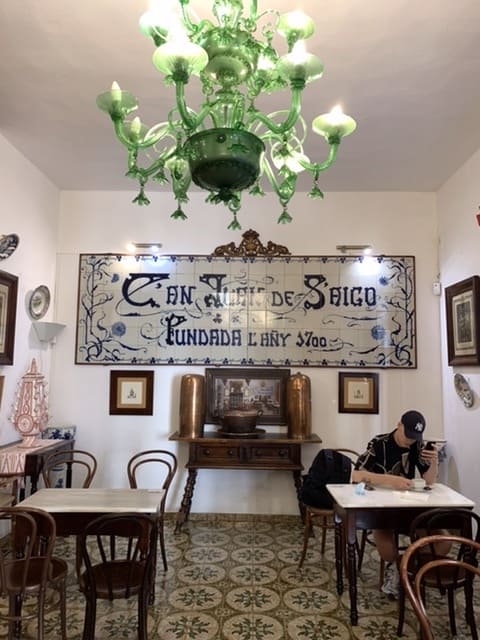 Talking about typical sweet things & their creators. Mr. Miquel de Sa Calatrava was an adorable baker from Palma who made the best cremadillos & ensaimadas of the city in his 500 year old oven, when you’d ask him about his secret he’d say “paz y ciencia, paciencia”, peace and science, patience. We are very lucky to be able to enjoy his “sweet” legacy from the hands of his sons in La vida dolça, that you MUST visit to savour this wonderful creations made with the very own Señor Miguel’s recipes. 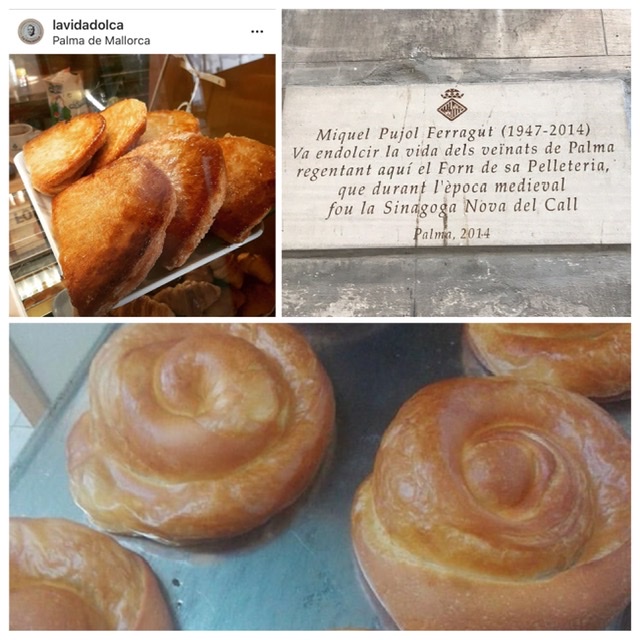 Another wonder that I never get tired of looking at is the Águila building, built in 1908, it is very near Plaza Mayor, which in the old days was the headquarters of the Inquisition, they called it the Black House, in 1813 they built the square and many little shops established there (slowly they moved to the Olivar Market) now there are mini markets depending on the time of the year, like Christmas. 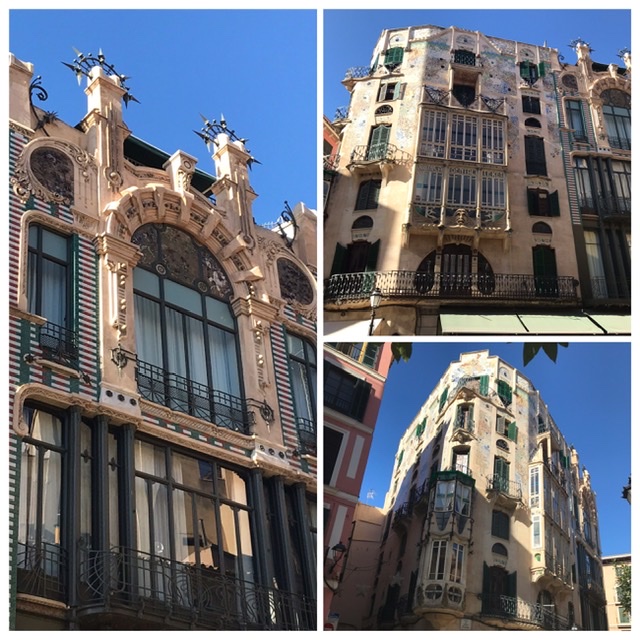 If you like modernist architecture this is your post, a mixture of medieval and modernist. Palma has various fabulous ones that’ll leave you open-mouthed, to me is the most stunning one is the Grand Hotel, which stands before the Principal Theatre since 1903. 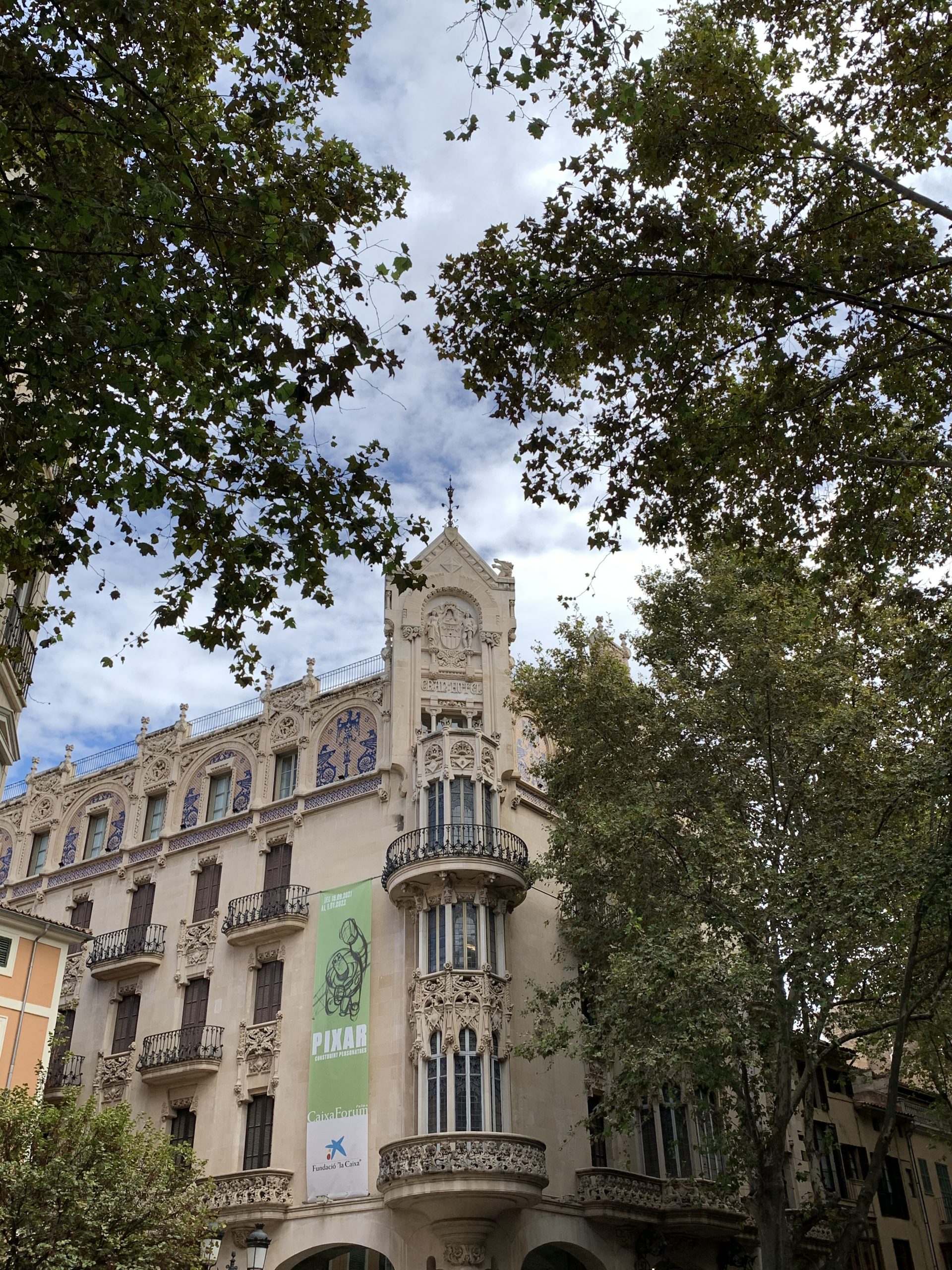 Turn around and the Forn des Teatre (also Fornet de la Soca) stands there looking really cute as well as offering you some typical delights. 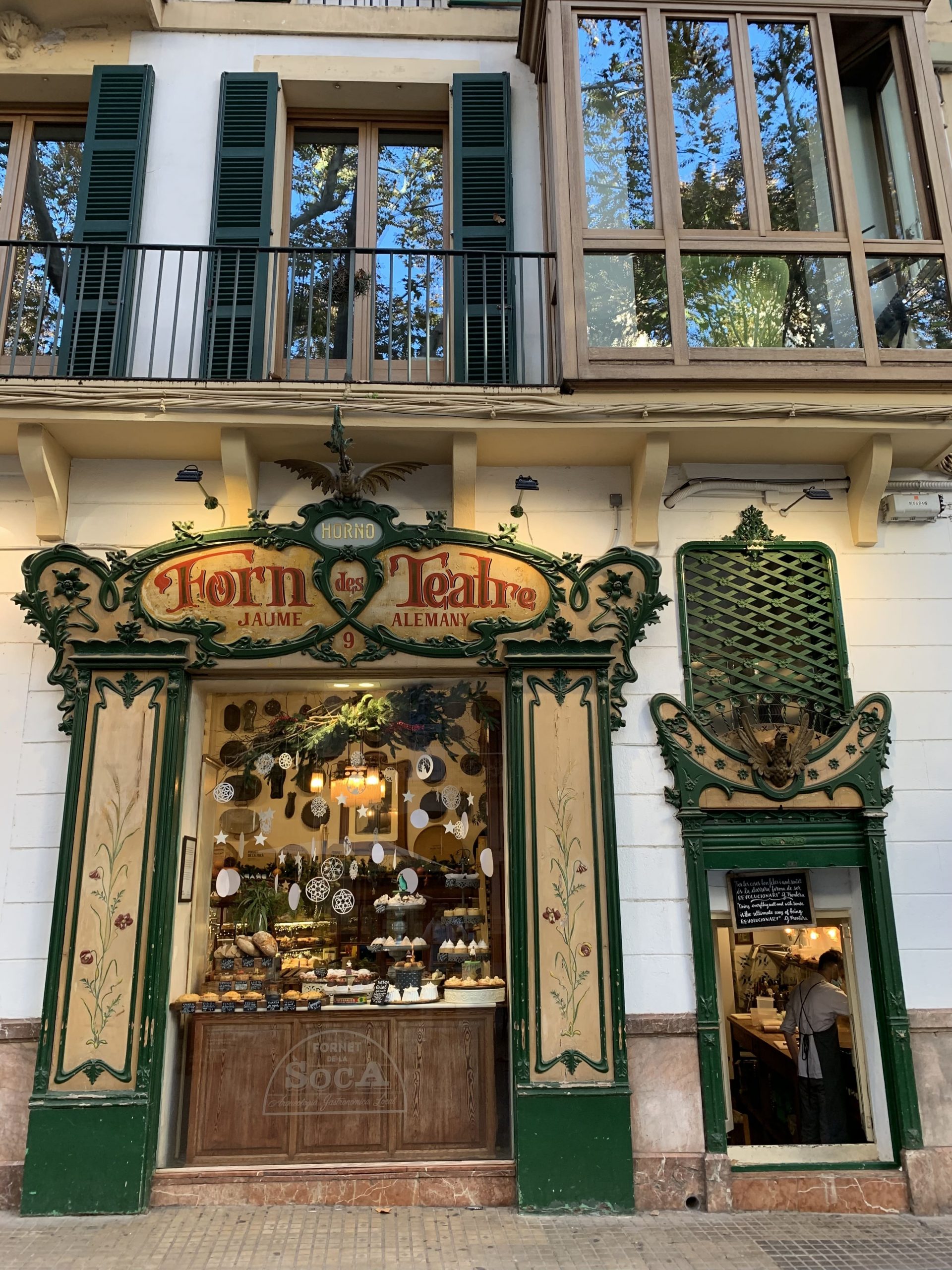 Can you guess what has made me love, even more if possible, this place where I was born? Travelling, seeing all the continents, making sure that I know how VERY LUCKY I am to live here, that is why I have chosen the book “Follow your heart” by the Italian author Susanna Tamaro. A beautiful tale from a grandmother to her granddaughter.

In a letter Olga opens her heart & tells her granddaughter all her most intimate feelings, thoughts, wounds & family stories, to open a dialogue between them, when she finds herself at the end of her life. 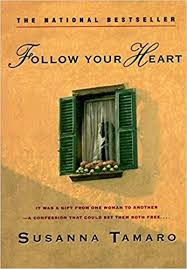 Where do you follow your heart dear nomads? Mine always takes me back to my island, the one I promise to show you through my eyes on more posts, now I will love you & leave you eating a delicious ensaimada.