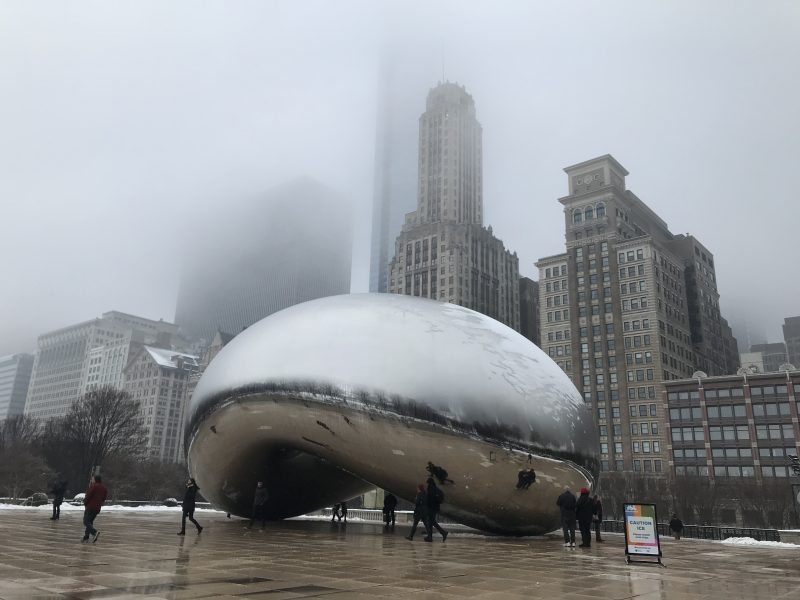 I went for a walk that evening, it was very cold but not windy so I made the most of it. I love the blue colours that my camera captures at dusk.

I started on Michigan Avenue, a main street part of the Magnificent Mile, the main commercial neighbourhood of the city.

The Water Tower also lives there, it’s one of the three structures that survived the Big Fire of 1871 which destroyed almost the whole of the city, reason why the Chicago we know today is quite new. 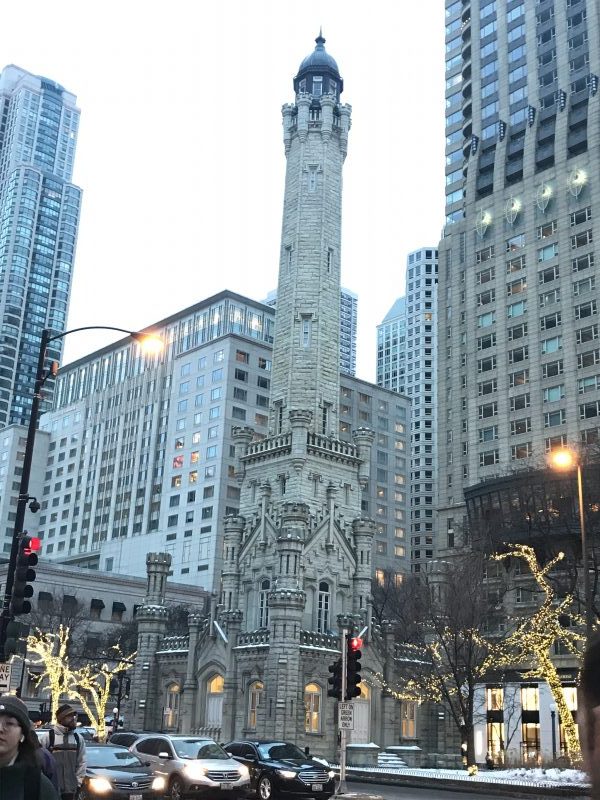 In the Magnificent Mile raises the skyscraper John Hancock Center with a sky deck where you can admire the whole city from in a clear day. John Hancock was one of the signers of the Declaration of Independence I mentioned on my post about Philadelphia. His signature was so big that the Americans refer to their signature as their John Hancock. 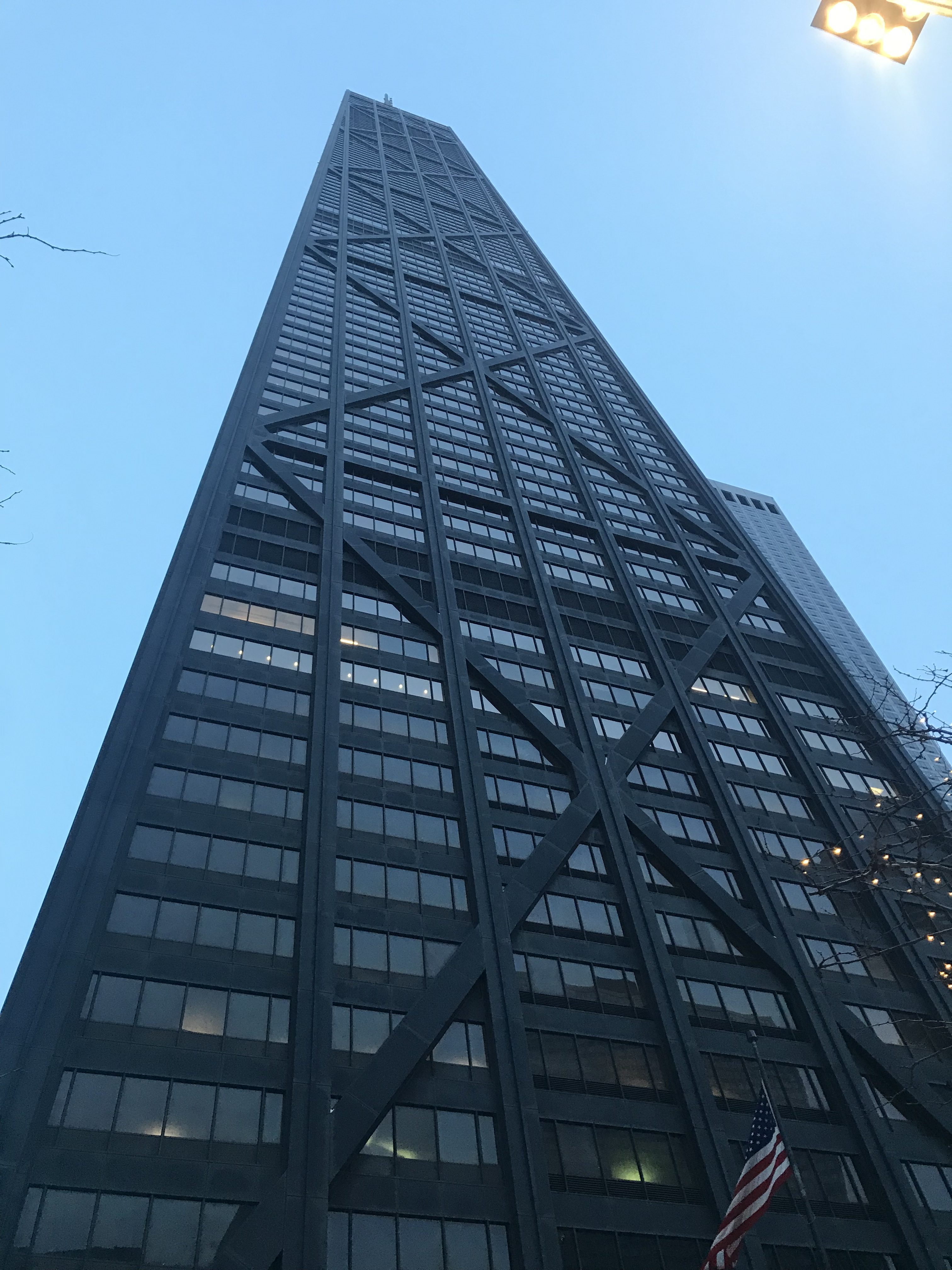 Walking towards the river I saw the headquarters of the Chicago Tribune, a neo gothic & very beautiful building with the particularity that has pieces of other buildings from around the world on the walls of its ground floor. 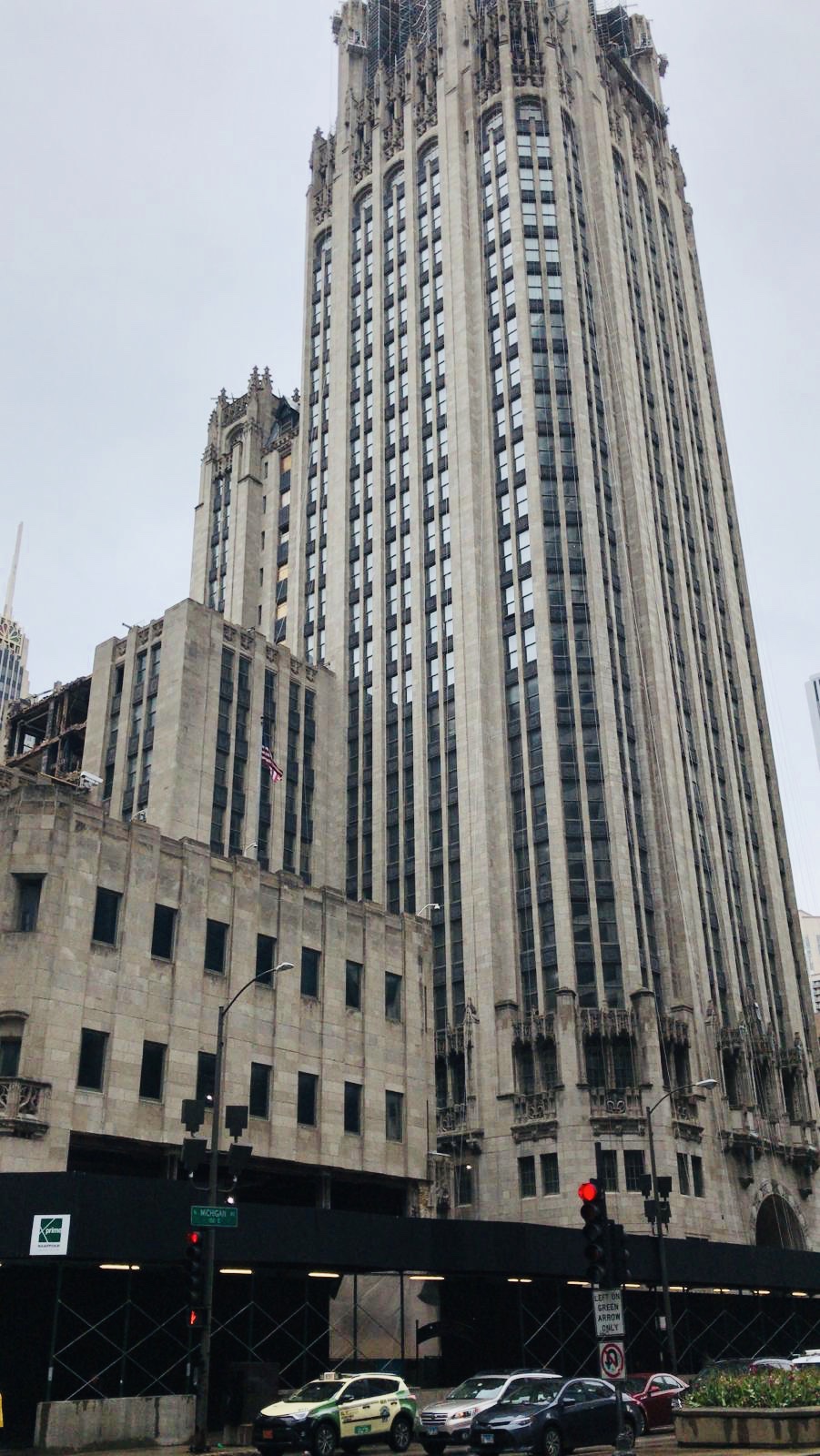 Close by, to the right we find the Wrisley Tower which clock & tower were inspired by the Giralda from Seville, Spain. 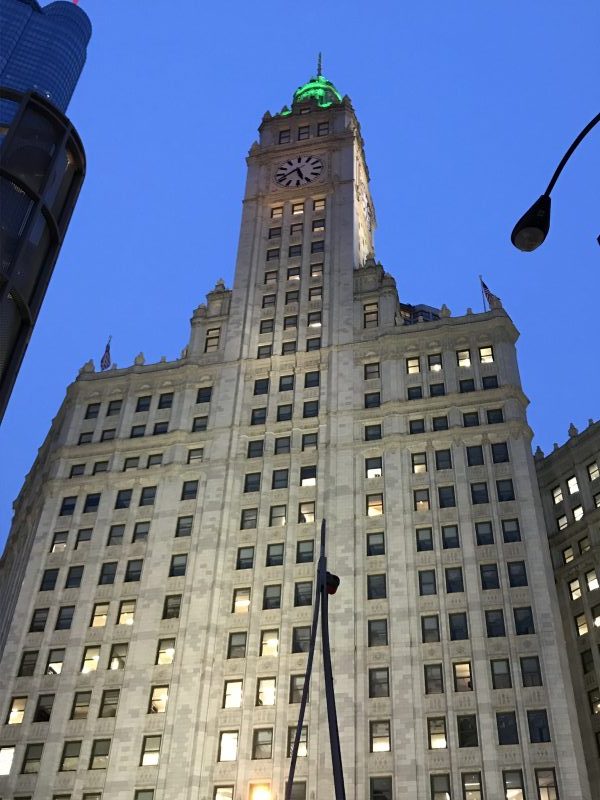 From the bridge over the river that flows from the great Lake Michigan, that looks more like a sea to be honest, I could admire those beautiful colours I was telling you about. 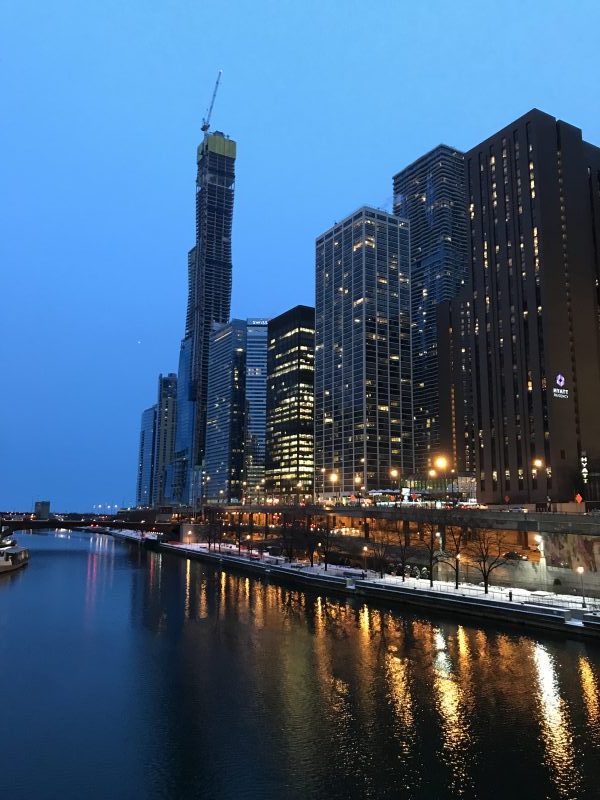 I went out of my way to the right as I wanted to see the Marina Towers, they are twins & look like a wasp’s nest. 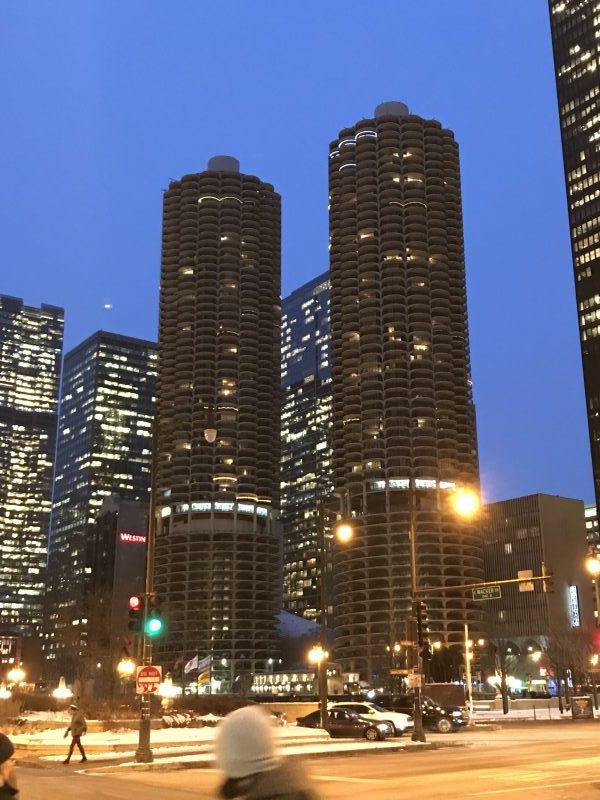 Walking along North State Street I saw a historic building full of lights, the Chicago Theatre, built in 1921. 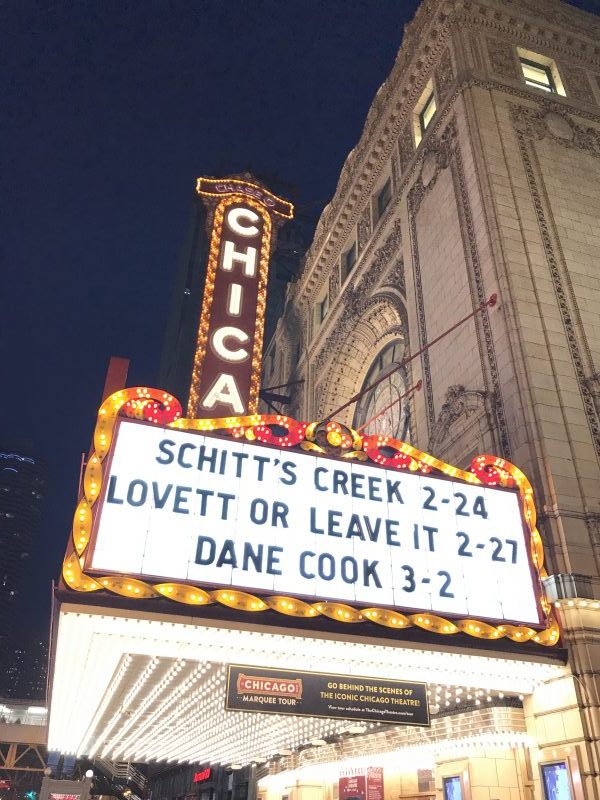 From there I headed to my last destination of the night, the Millennium Park. There I found what’s become the icon of the city, The Bean, a dazzling sculpture by Anish Kapoor. 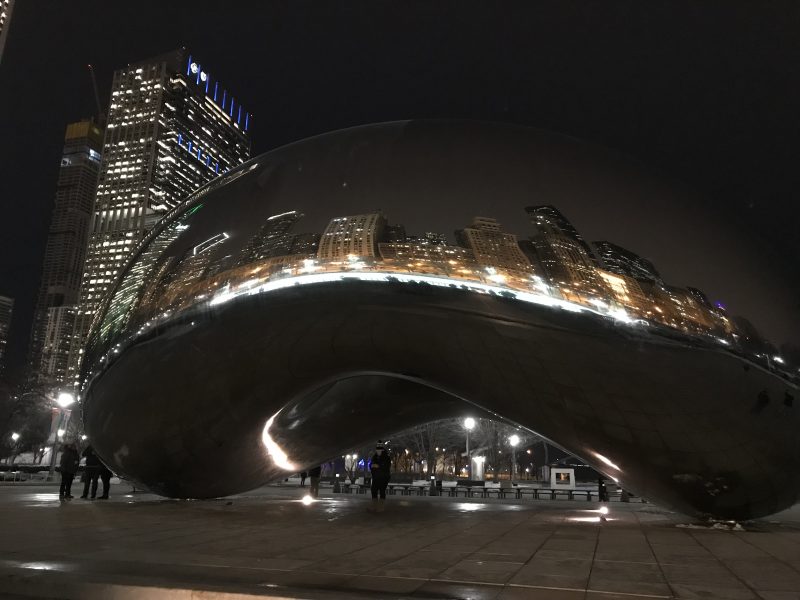 I really love it, the shape is very original, the city reflects in it & the nomads too! 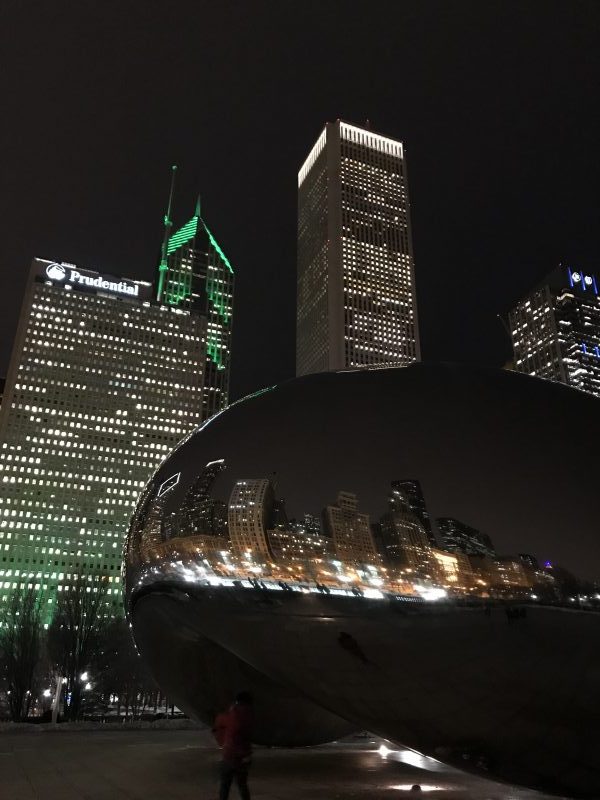 In the same park there is a very original videosculpture, the Crown Fountain by Jaume Plensa. They are two fountain-screens facing each other showing people´s faces that keep changing. There was no water flowing that night as it was in danger of freezing. 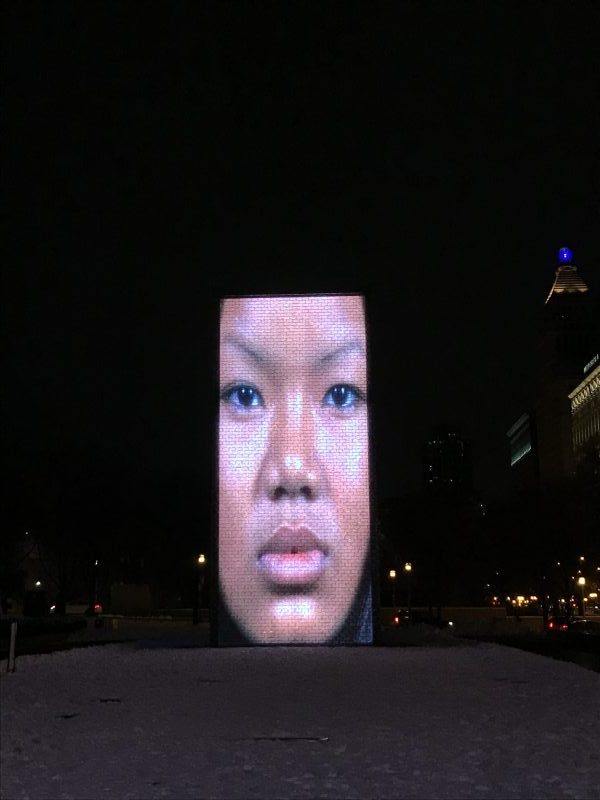 A few meters away there is the Arts Institute, place where the Obama’s had their first date. 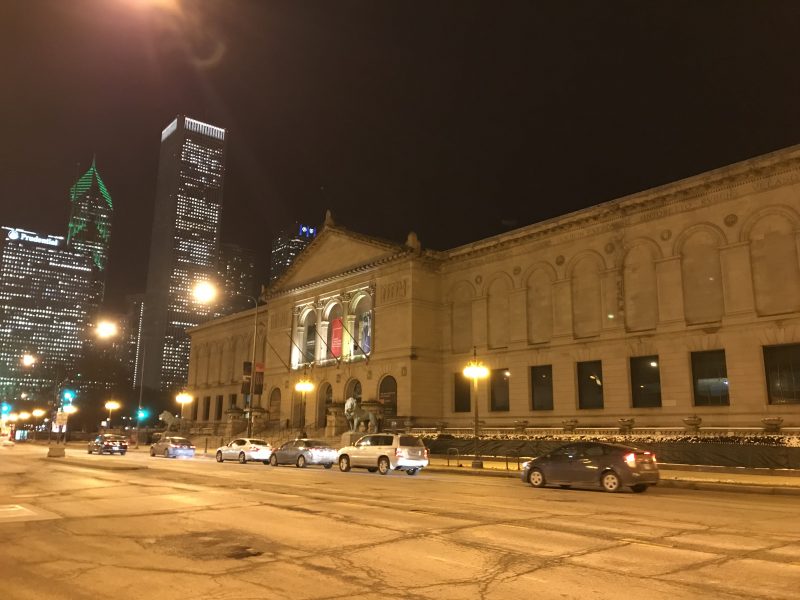 Crossing the street there is a sign that marks the beginning of the Historic U.S. 66 Route, stablished in 1926 took many immigrants west looking for sunny Californian lands (it ends in Santa Monica, Los Angeles). In those days it helped to maintain the economy of all the communities it passed. 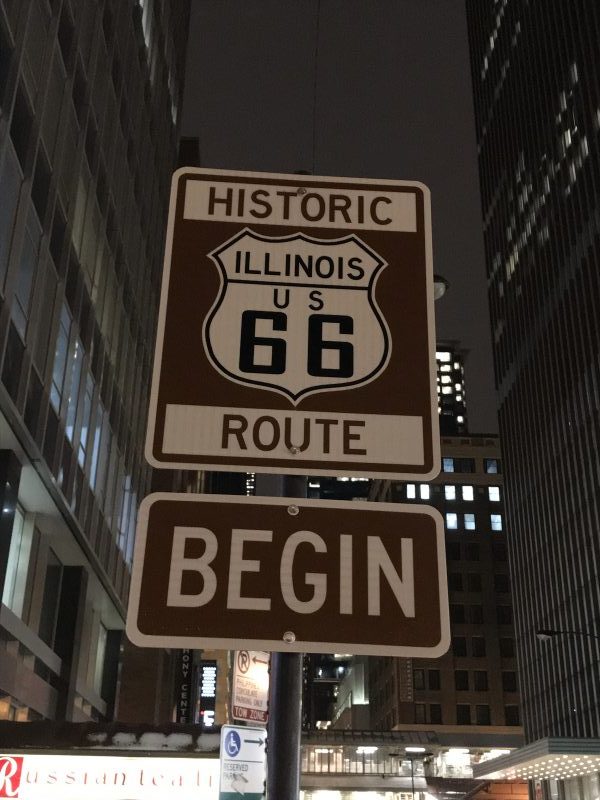 In the morning it was snowing, I wanted to go exploring by foot but I was risking breaking my neck on that slippery road so I took the 192 bus to Union Station. 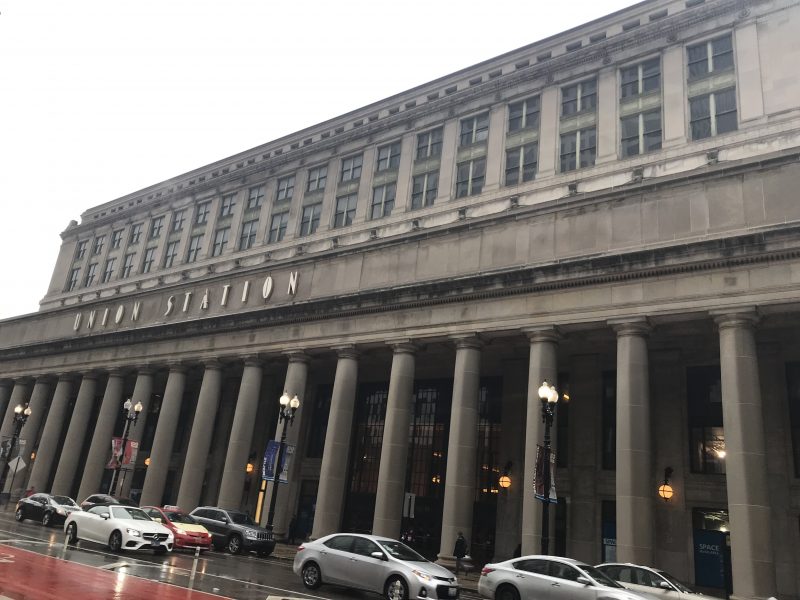 The nomads from my generation will recognize these steps. 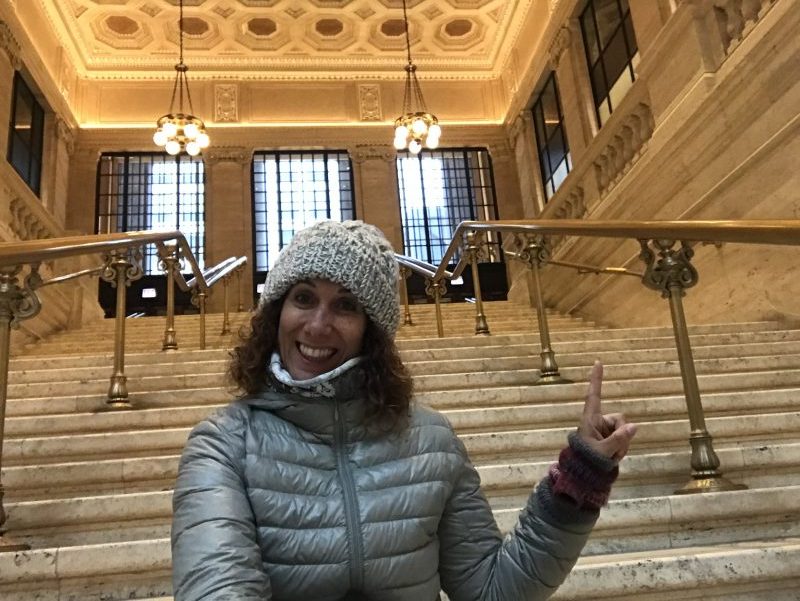 In them the famous scene of a baby stroller falling downstairs of the movie “The Untouchables” was filmed in 1987. The station was completed in 1925 & it is very charming. 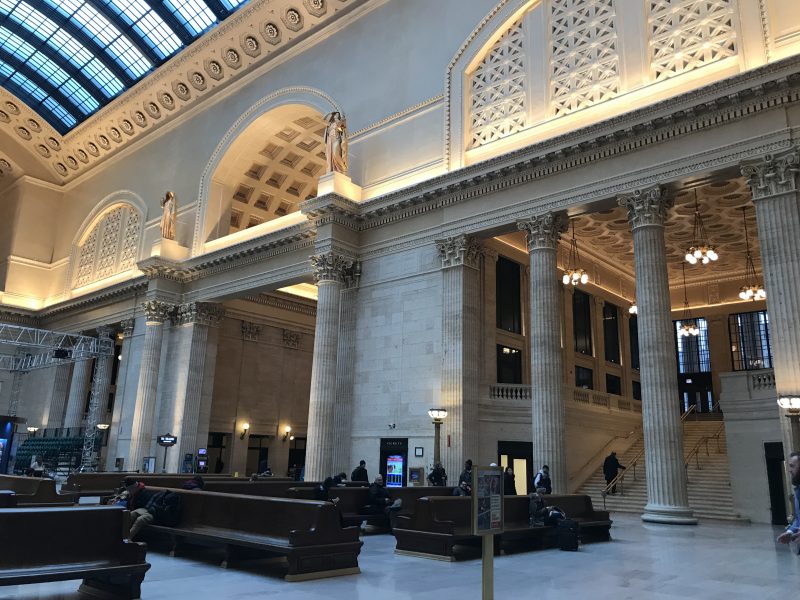 It had stopped snowing so I walked back to have the opportunity to see some of the so much art we can find in the streets of the popular neighbourhood of the Loop. An example is this immense sculpture that Pablo Picasso gave to the city in 1967 & now embellishes the Daley Plaza. 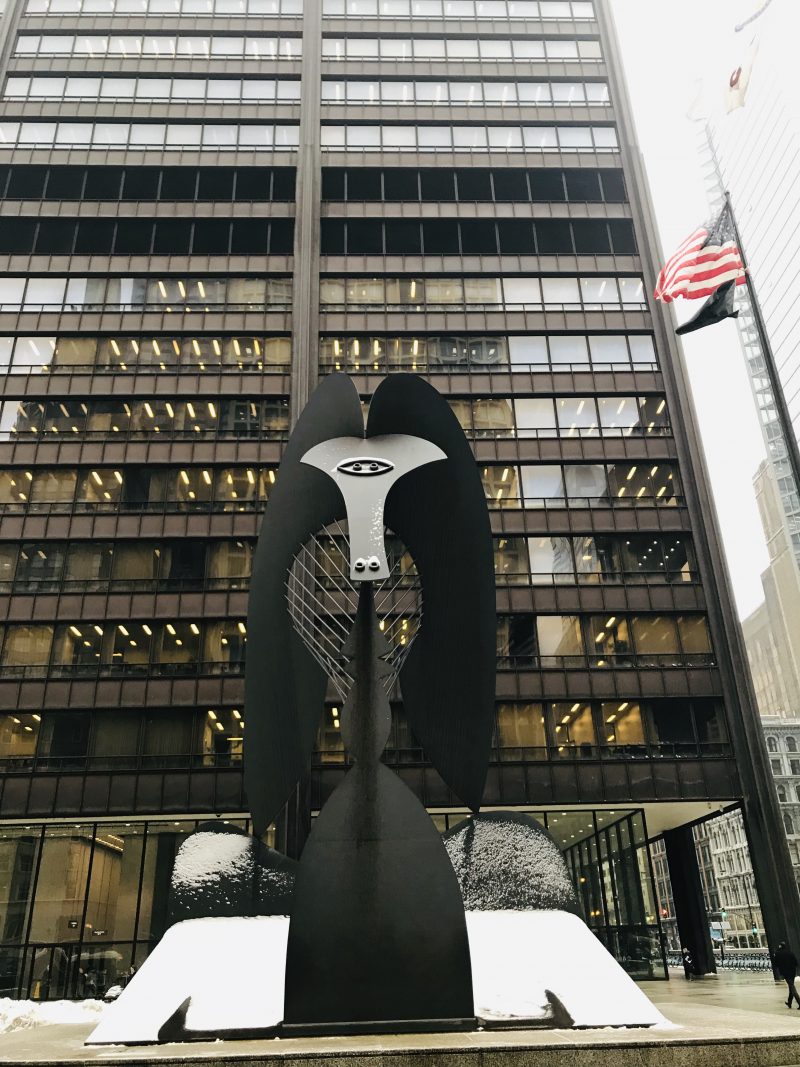 Next to it there is the Eternal Flame & opposite the historic building of the City Hall. This square has also been the scenario of many movies. In “Batman Begins”, the Daley Center was the headquarters of Wayne Enterprises. 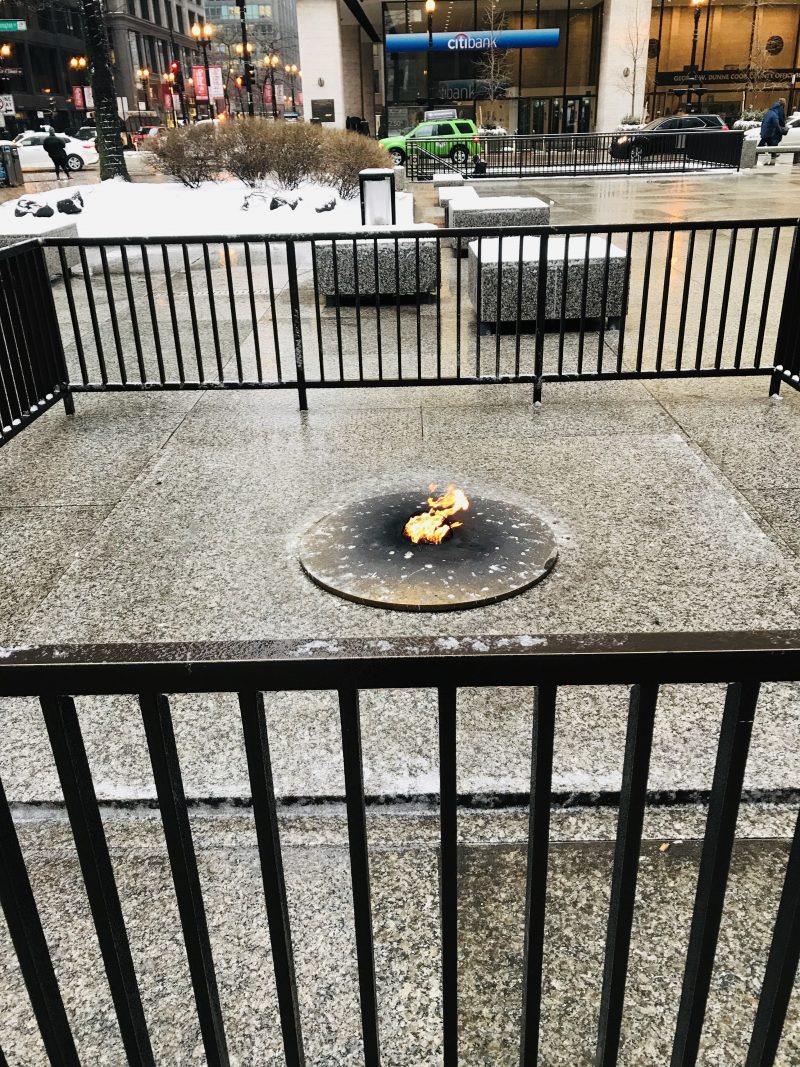 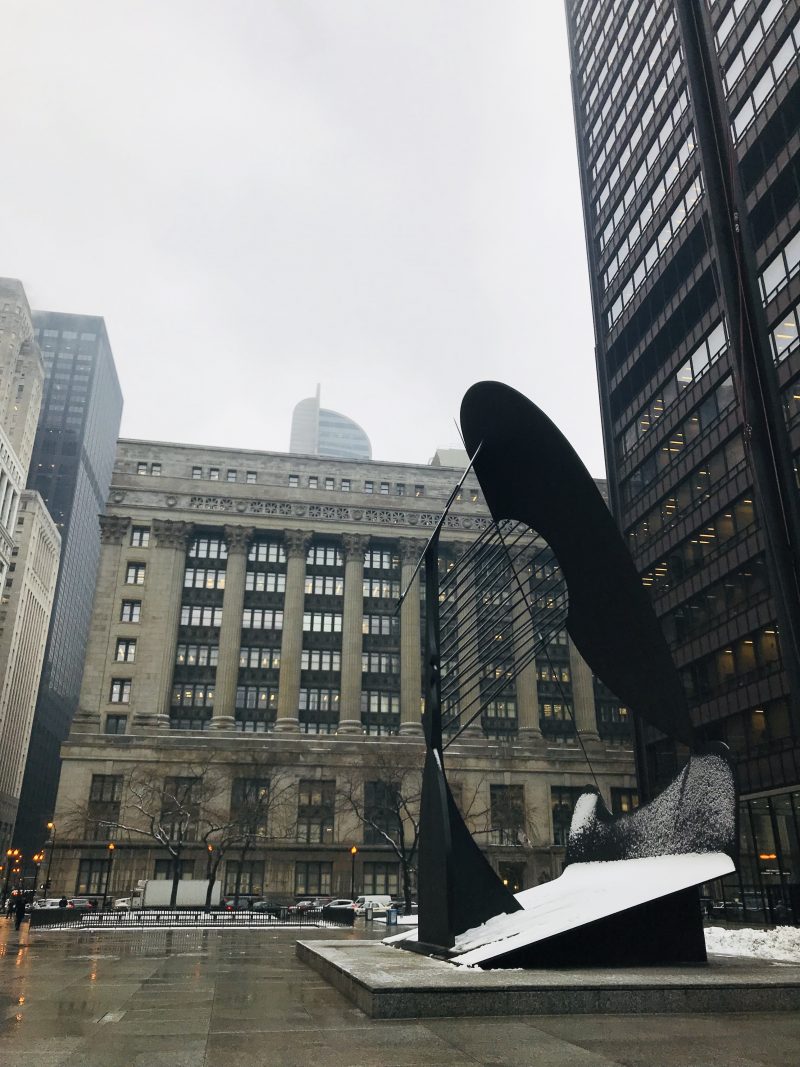 In the street beside the beautiful art deco Chicago Board of Trade stands, also home of Wayne Enterprises in “The Dark Knight”. 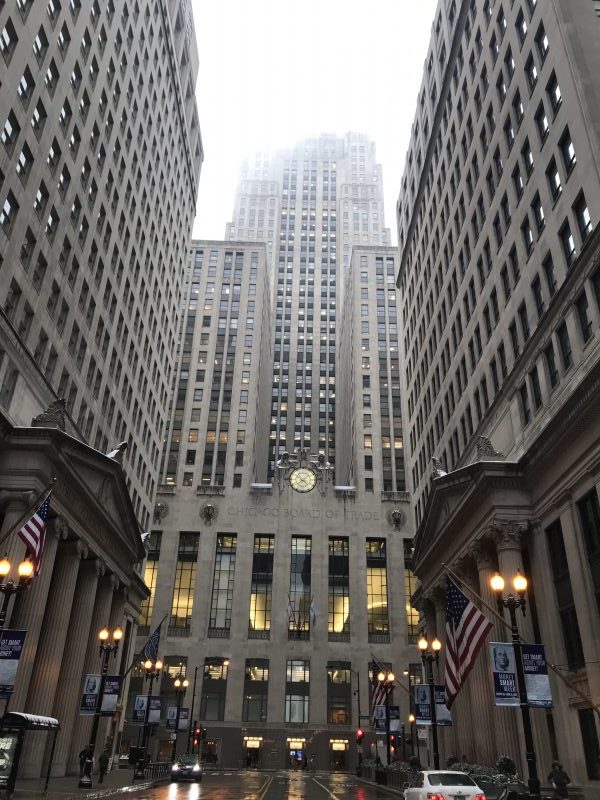 The Willis Tower (before Sears Tower) is the second tallest tower of the country. Its sky deck has glass balconies from where you can see the whole city & “float” on it. No floating for me as the clouds where down to my nose, as you can see. 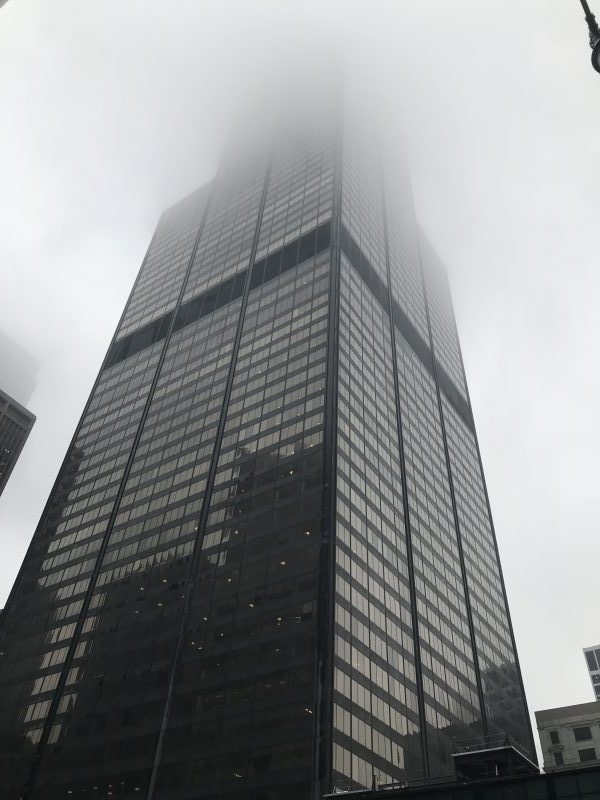 I was once again near the Millennium Park where the Chicago Cultural Center is. It used to be the Library before they moved it. It is a magnificent & grand building now used for multiple art events. I enjoyed a few exhibitions avoiding at the same time the polar February cold. 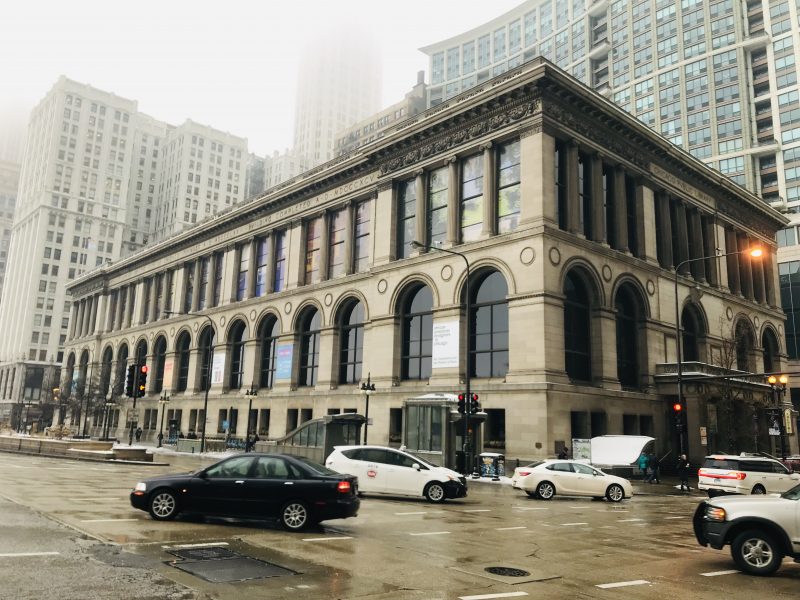 Talking about the cold, when I passed near the frozen lake it was very windy, so I decided to leave that area for another visit in a warmer season.

After the Big Chicago Fire that lasted for three days great architects arrived to the city to rebuild a better & bigger Chicago. That reminded me of a historical novel which epicenter is the construction of a gothic cathedral, “The Pillars of the Earth” by Ken Follet. In it the author links the lives of different families involved somehow in the construction of this cathedral in the Middle Ages. Tom Builder is the constructor & main character who, along with all the other characters from different social clases who surround him, will form the stories of love & death, dames & knights, feudal grants & priors of this plot about times of violent passions, contextualized in various historical facts that I encourage you to read, dear nomads. 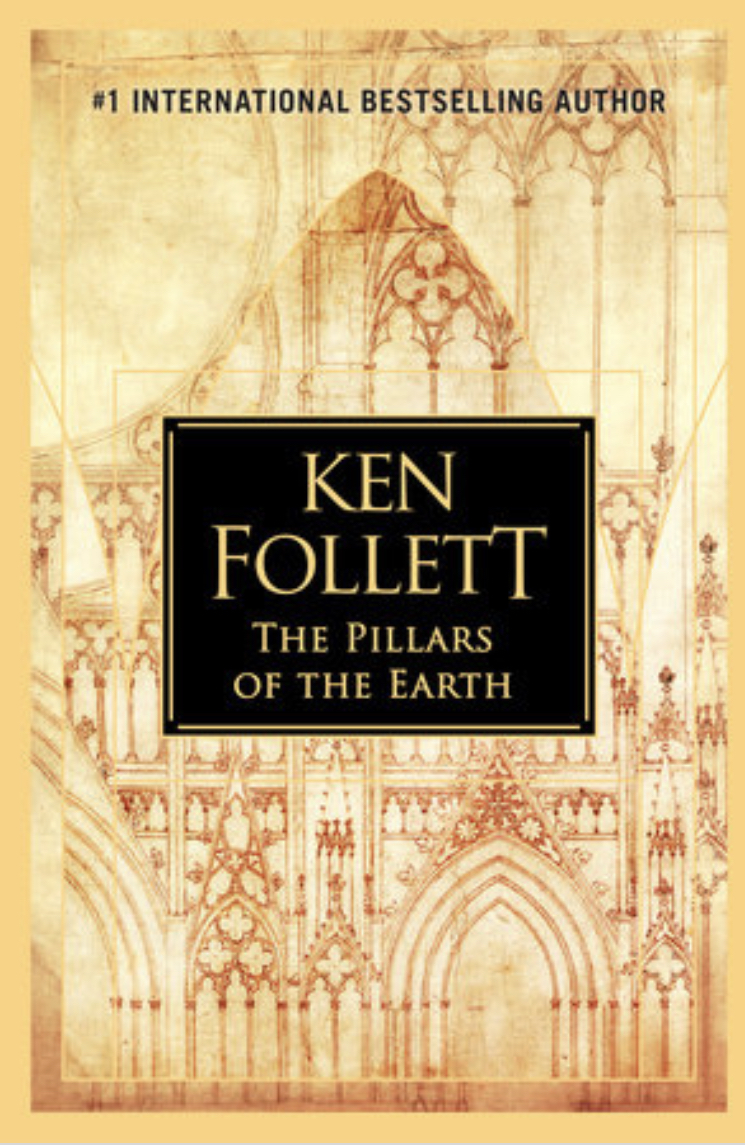