Ahoj Prague and some magical villages.

From the heart of Europe the beautiful Prague salutes us, capital of the Czech Republic and of the Bohemian region.

From the top of a hill ,in between the clouds appears the Prague Castle, it is not just a castle but a complex, like a little magical small village. One of its charming streets is a short one full of colourful little houses. They were inhabited by goldsmiths and alchemists of the court, they were looking for the elixir of life and the secret to turn stones into gold, that’s why it’s called the Golden Lane. Today, they are all small shops. Let’s see if you can guess, dear nomads, who lived in the number 22, in the blue house.

Inside the complex of the castle it raises, since the XIV century, the Gothic Cathedral of St. Vitus, majestic and beautiful. 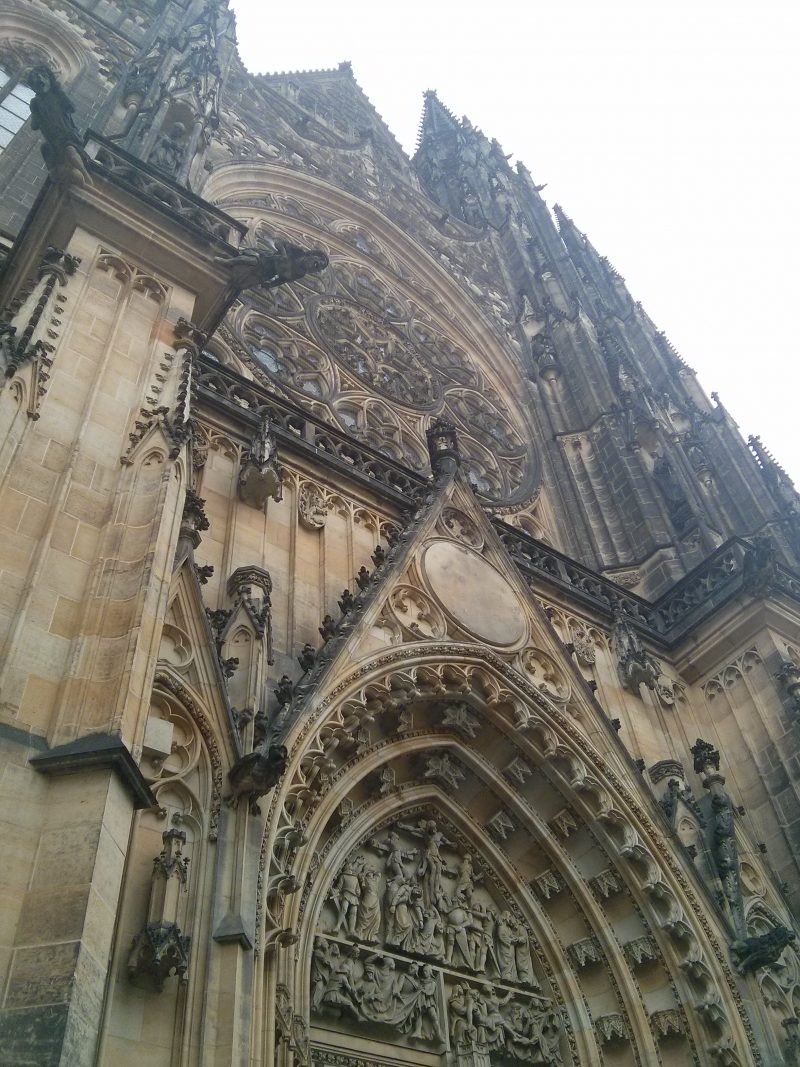 Outside the city walls you’ll find fascinating buildings, the truth is that this city is full of them, I can never get tired of seeing them filling its streets.

Taking some very long steps down hill and passing near the Bridge of Love, that is full of padlocks, you’ll find the Lennon Wall. Since the eighties, it has been painted with graffiti inspired by the singer John Lennon and songs of the Beatles. A wall full of controversy which irritated the communist ruler of those years. So if you fancy leaving your mark, here it is! 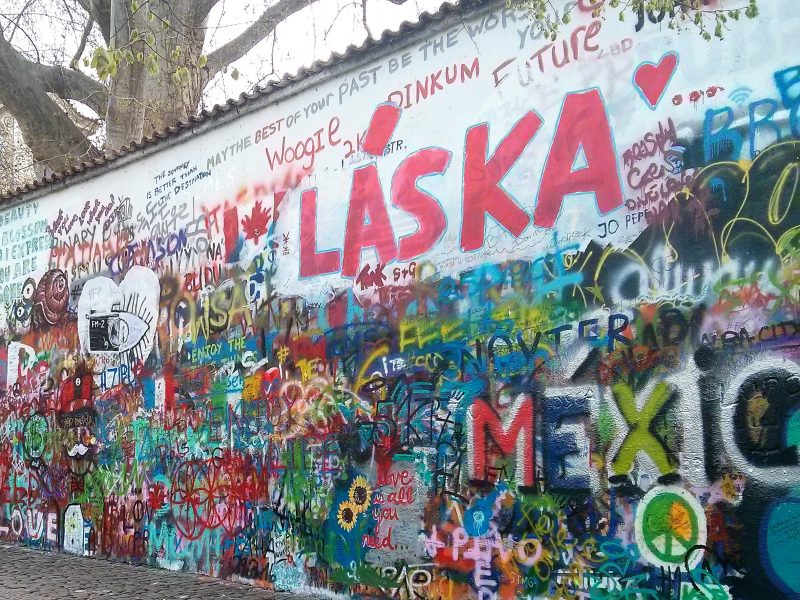 Close by, crossing the Vltava river, aka the “Bohemian sea” or the “Czech national river” you’ll see the Charles Bridge, you must cross strolling as it is full of life, people and artists. On its side walls there are bronze figures that tell stories, some are half golden by the persistent human touch, as they say they bring good luck … let’s touch! 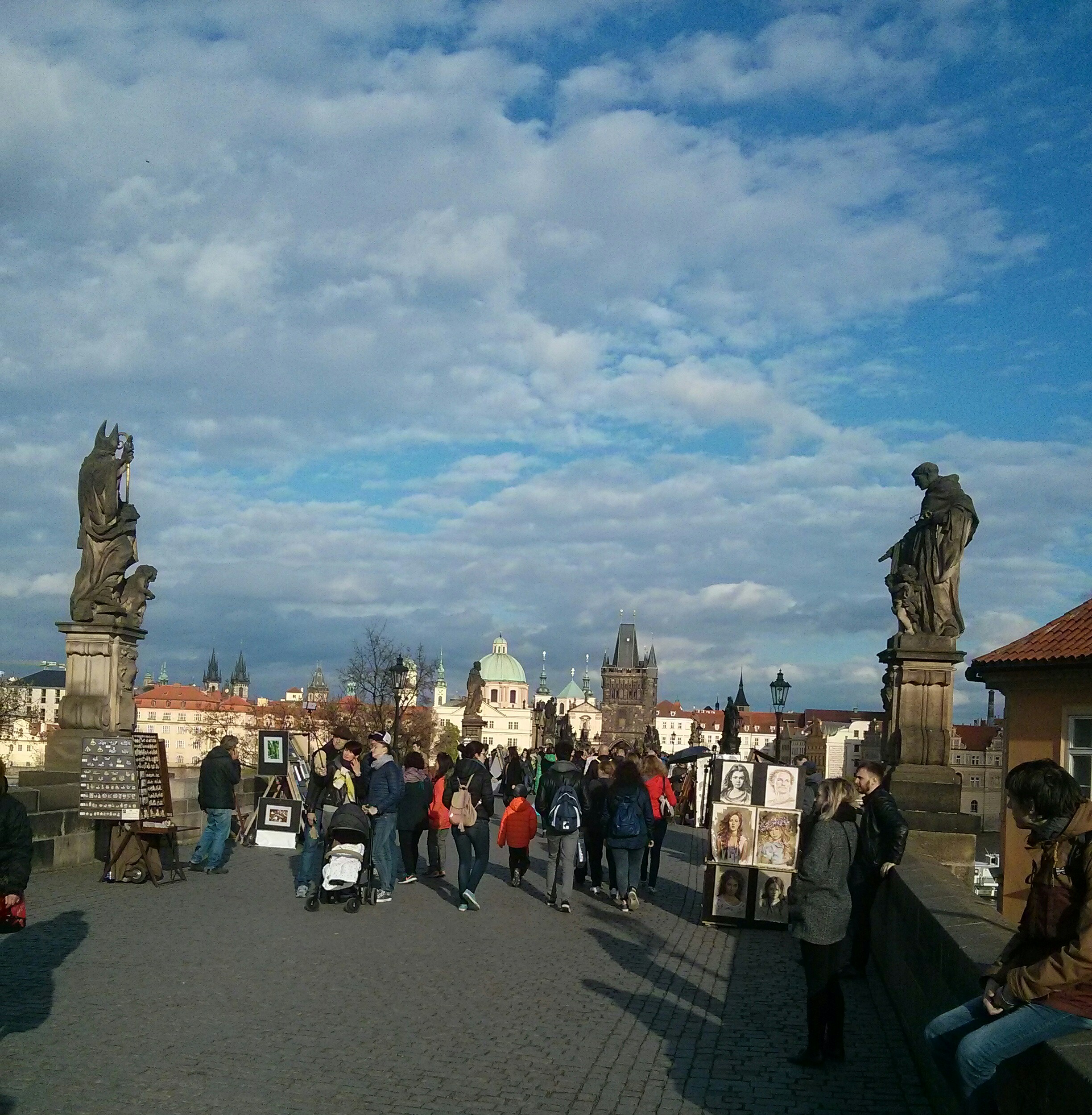 The bridge leads to the Historical Center that is World Heritage by UNESCO since 1992, where streets lively streets appear and, of course, more beautiful buildings, like the impressive Church of Our Lady before Týn, placed in the square where the Astronomical Clock is, it congregates loads of people to watch how the little figures get out of the clock and do their show, it’s super cute.

We were so lucky to have the BEST GUIDE who showed us all the secrets of this beautiful city. Jitka from “Visit Prague The Guide”, besides speaking very good English and Spanish, is very knowledgeable of all the stories of the place as well as the history of the city, don’t miss the opportunity to hire her.

She took us to see a very curious sculpture in the Municipal Library of Prague, it is made with books and has no end, let’s see if you know what it is. I thought it was quite unique, and as I love books so much I immortalized it for you to admire it … and guess. 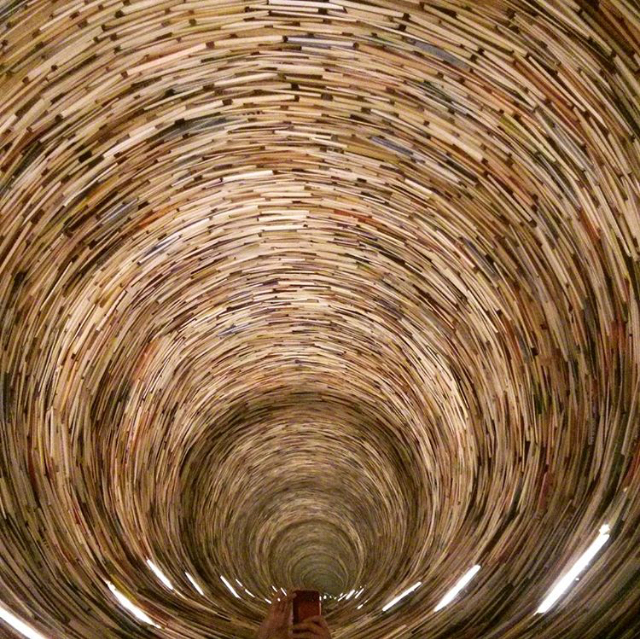 In the outskirts of the city there are villages full of charm and very magical. In Panenský Týnec you’ll find one in particular which has what it was the project of a church, but the owner of those lands run out of money, and what it has arrived to our days are these beautiful ruins. I was very lucky to be invited to a friend’s wedding celebrated there, it was so authentic and magical. There were even doves flying into the sky. 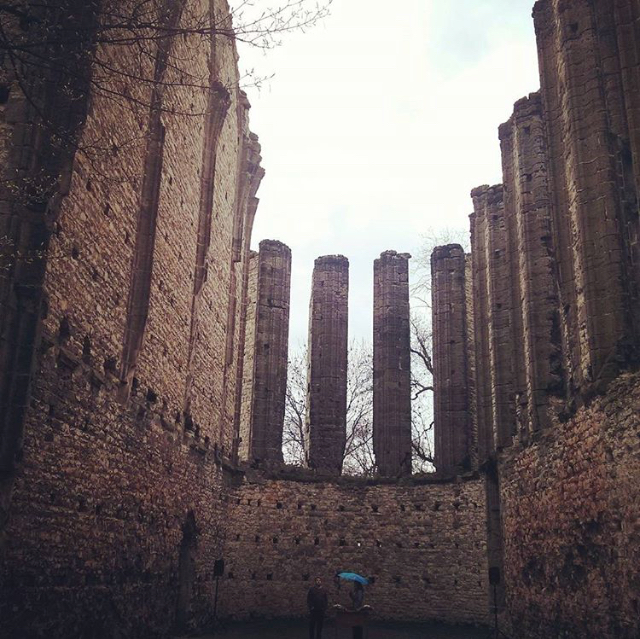 In the history of most of the countries we always find some sad events. In the village of Lidice, we can see a statue as a tribute to 82 children who died gassed in a truck during WWI. Today I’d like to include it as a reminder of what it should NEVER happen again.

It is very emotional to stand before them.

And continuing with the magic of the country, we find another village that looks like it is inhabited by fairies, Hrad Okor. There is a little stream that runs through it and that takes us to the ruins of a legendary castle. In the nearby forest, a magic circle was created a few years ago, standing inside you can feel a very magical energy, so much that you can almost see the nymphs and the witches dancing around the fire.

I am telling you that between the magic and the castle I felt like at any minute three dragons or a wolf called Ghost would appear. 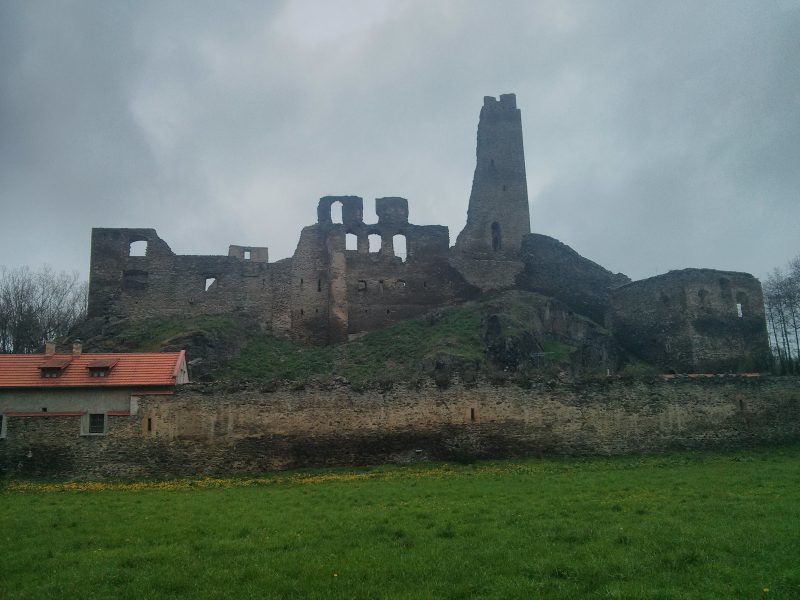 I spoke today about Frank Kafka and its little blue house, I couldn’t finish this post without sharing with you one of his most famous books, The Metamorphosis. Some might find this short novel a very abstract tale. It is open to various interpretations due its symbolism and metaphors. A man wakes up converted into an insect, his thoughts, how he sees his family, are part of the process he experiences, as it is not only physical, but also metal. Here it is, I hope you like it and enjoy it as much as these beautiful places we’ve visited today. 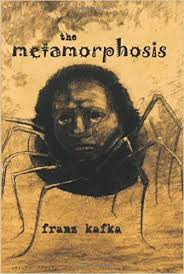