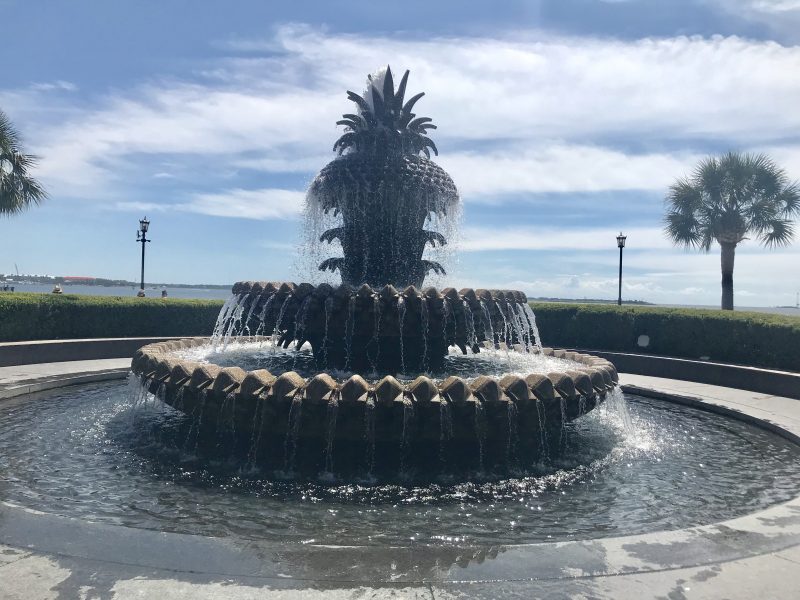 Charleston is a beautiful, elegant & quaint city in South Carolina.

Its name derives from the one the British chose when they colonised it, they called it Charles Town, after the king Charles II of England.

It has a great bay with loads of history, there we find the island of Fort Sumter, which was designed to protect it & ended up being the place where the Civil War started. 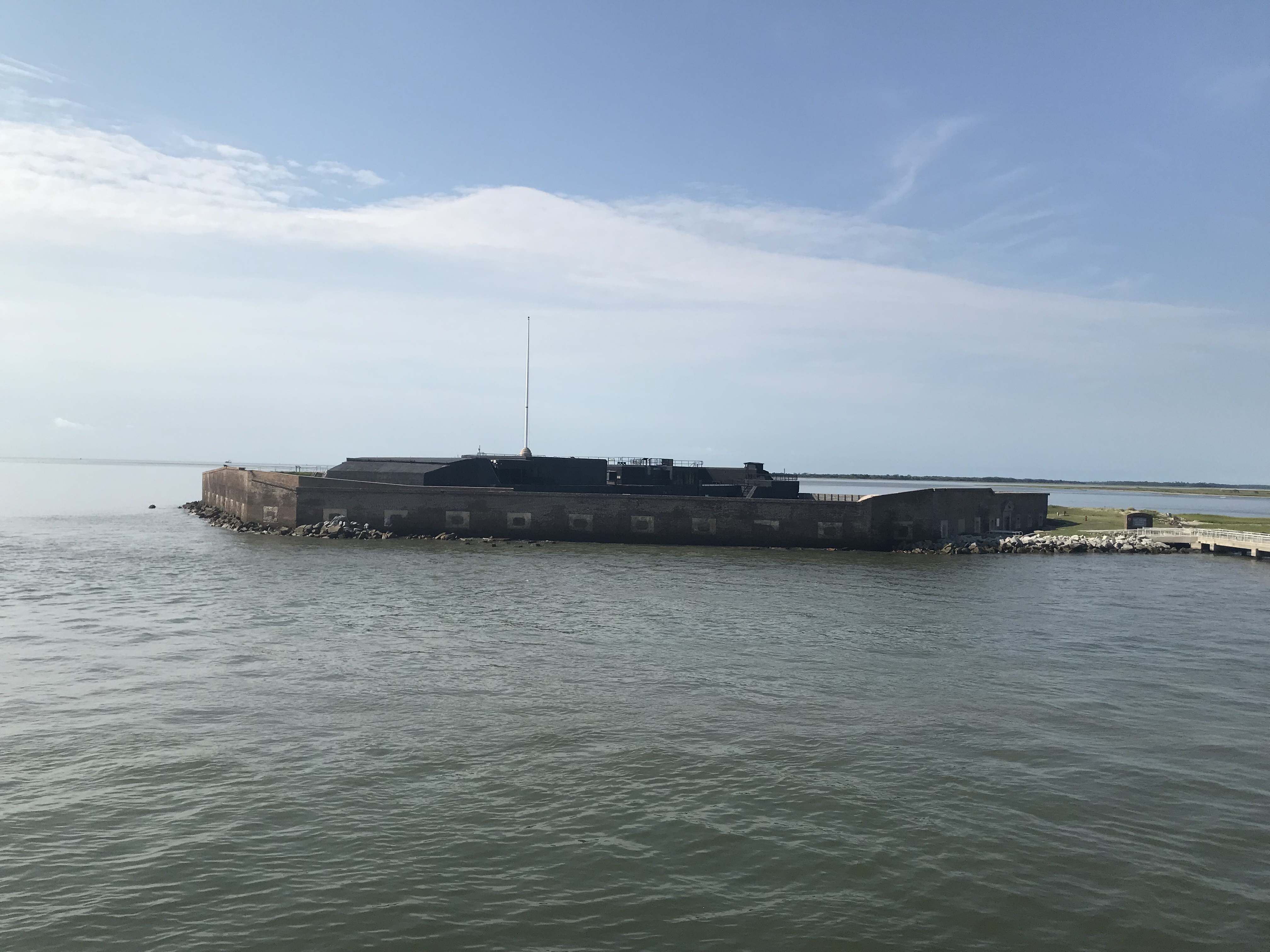 From The Battery, a defensive seawall, at 04:30am on April, 12th 1861 they fired the first cannon against the Union tropos set in the fort & against the flag. 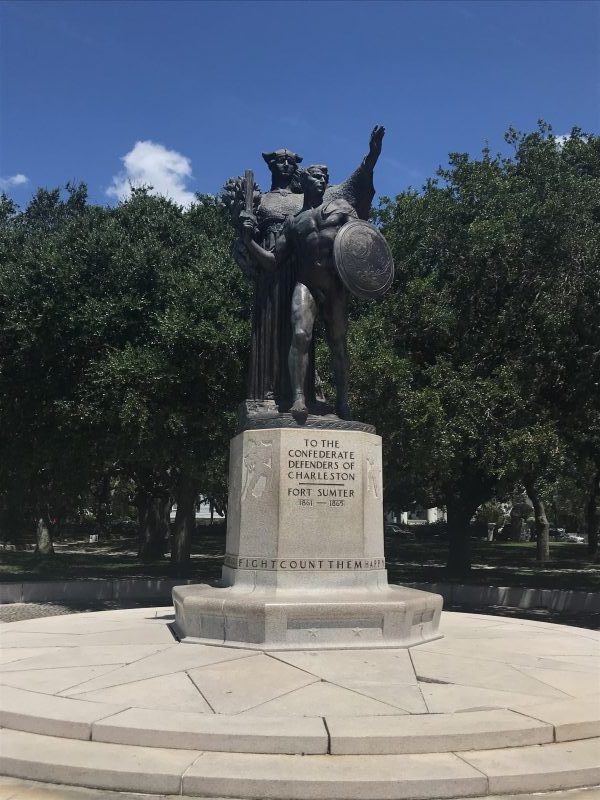 Today only ruins remain of the fort that can be reach by ferry from different spots; I caught it from the pier near the Aquarium, the ride was half an hour long & I must say, very relaxing. 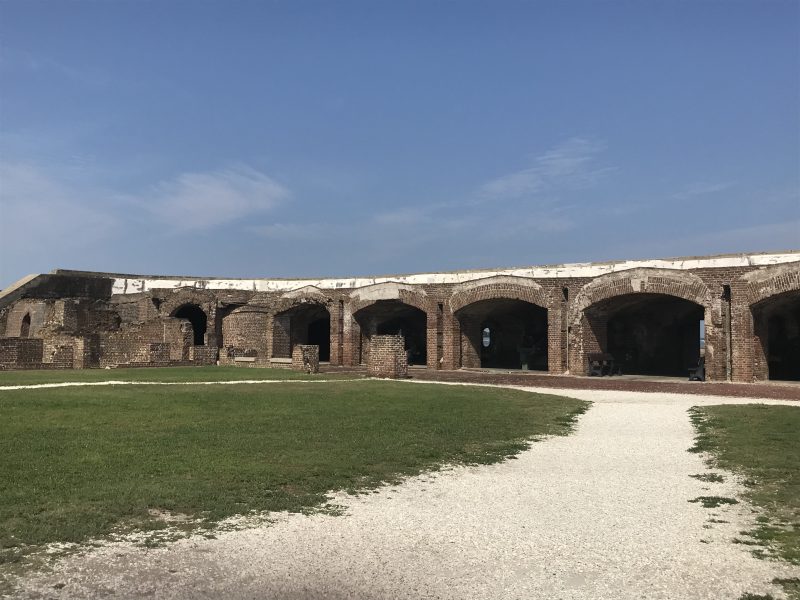 I suggest getting there at least half an hour earlier to have time to buy the ticket & board, you can also have a look at the little museum & cool down, as if you walk there during their hot & humid summer, like I did, you’ll need it.

There is an advantage of taking the first ferry at 09:30am, as at 11am, after a talk given by a ranger, we can watch how they raise the flag with the help of volunteers. I offered myself as foreign representation, of course. 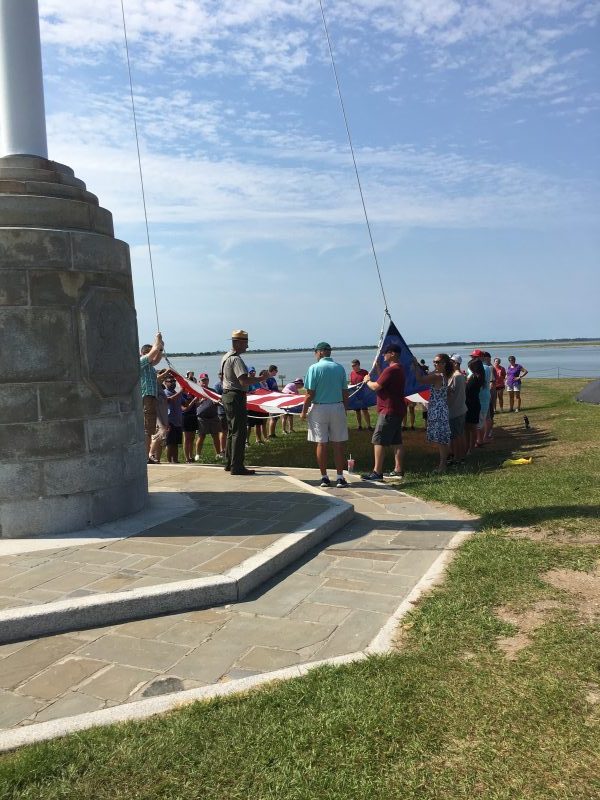 Afterwards we went back to port. The whole tour took us around two hours & fifteen minutes.

The water-taxi is another aquatic & fun ride that you can do for $12. It stops in various places, like Patriots Point, where the Maritime Museum is; there you can visit an aircraft carrier or a submarine from WWII, which by the way, will be sunk to create an artificial reef. 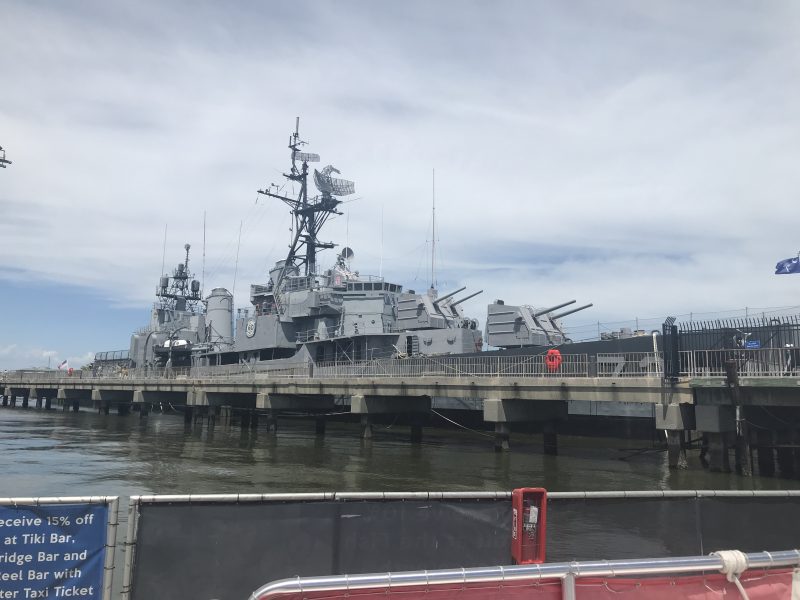 If you are lucky you’ll see dolphins swimming along in the bay. You’ll also be able to admire the third longest cable-stayed bridge of the Western Hemisphere. It’s known as the Ravenel or Cooper River Bridge, as it crosses one of the two main rivers of Charleston, the Cooper River. 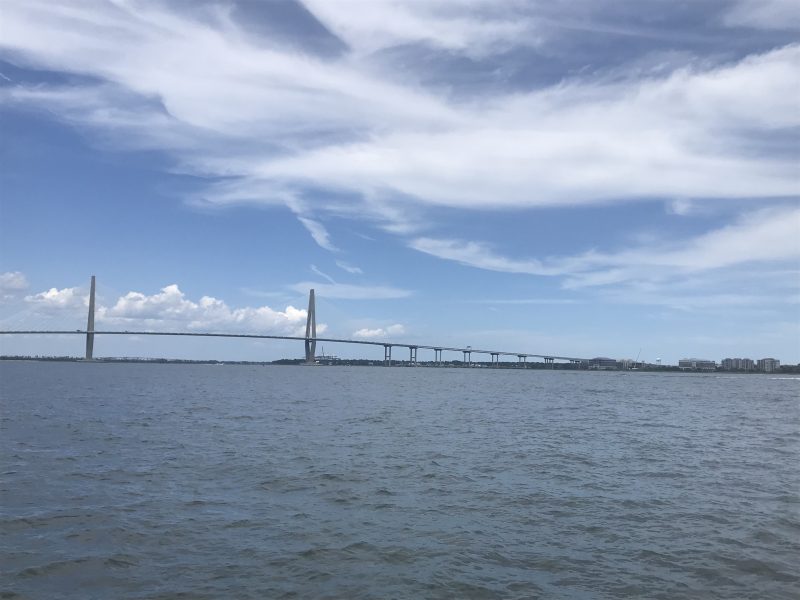 Once back on land I recommend a walk on the waterfront where you’ll find a fountain that has become a symbol of the city, the Pineapple Fountain, where I got myself into emulating Anita Ekbert in “La dolce vita”, effects of the heat I guess. 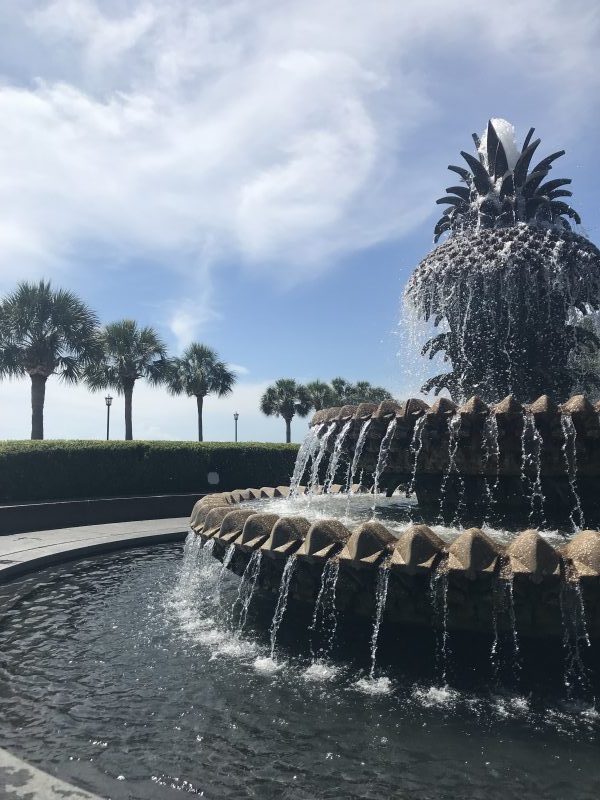 The legend says that the sailors used to come back home with loads of exotic fruits, pineapples amongst them. The wife would place one outside the house when the husband was at home. I wonder … was it an indication for the lovers to stay away?

That’s why we find pineapples all around, whether homes, souvenirs or fountains.

We were thankful for the shade of the beautiful trees of this park & for the water fountain where we refilled our bottles. 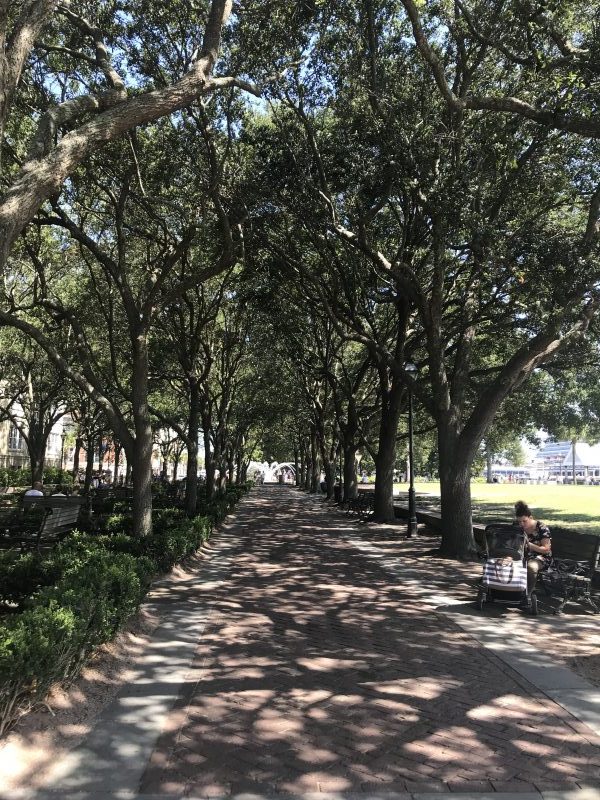 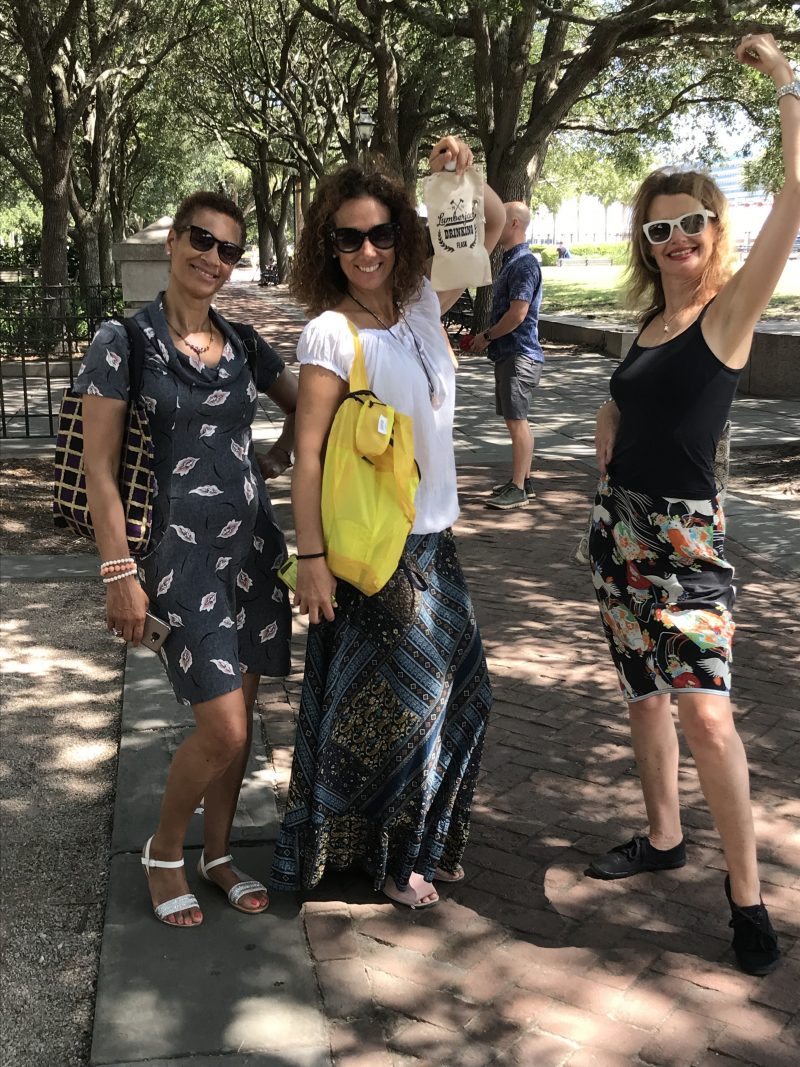 We were also glad to see the dolphins again & to admire the pretty homes we saw whilst walking along the waterfront to The Battery. 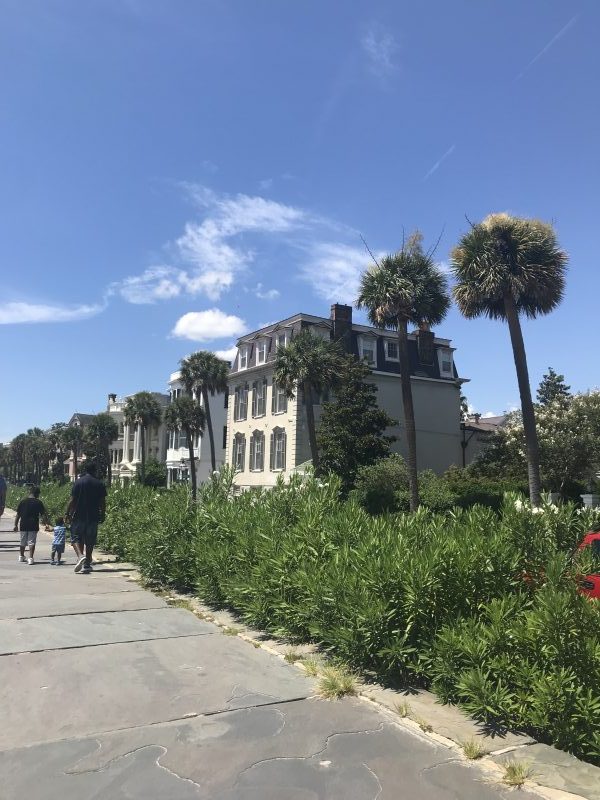 From right there, if you get into a parallel street you’ll stumble upon another place you must visit, the Rainbow Row. 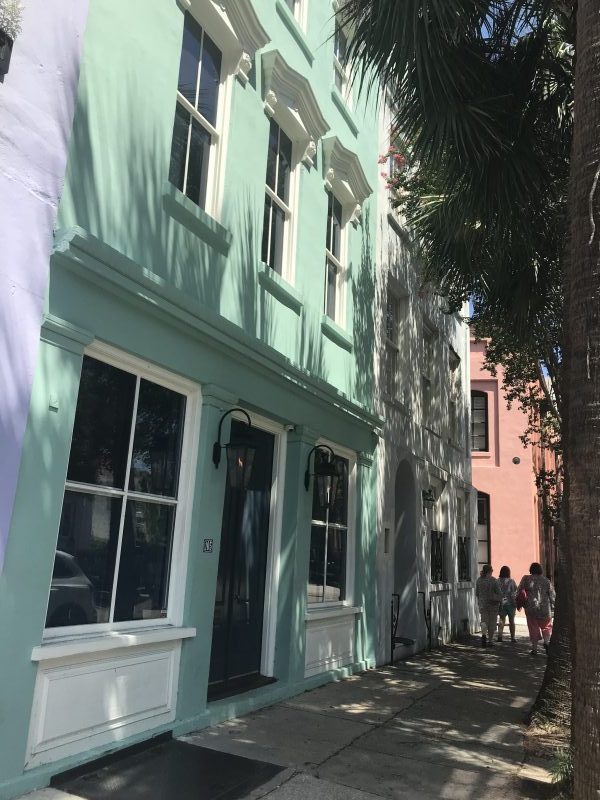 Thirteen houses where merchants lived in 1740, till one day in 1931 a good lady decided to buy & paint them in pastel colours. It’s also the longest cluster of Georgian row houses in the US. The first ones were built in 1680. 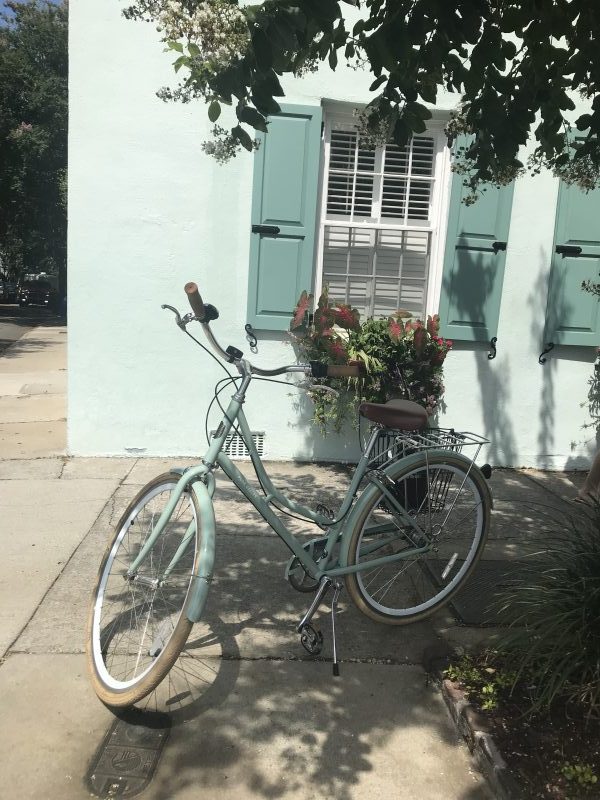 From the sea we didn’t see any skyscrapers in this city, but many steeples. 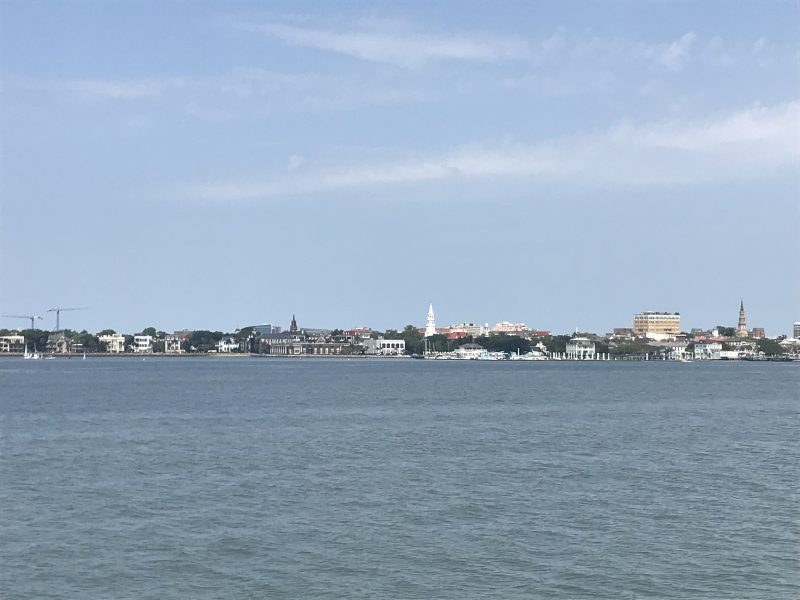 The great number of existing churches is the reason why they call it the Holy City. Its catedral is stunning. 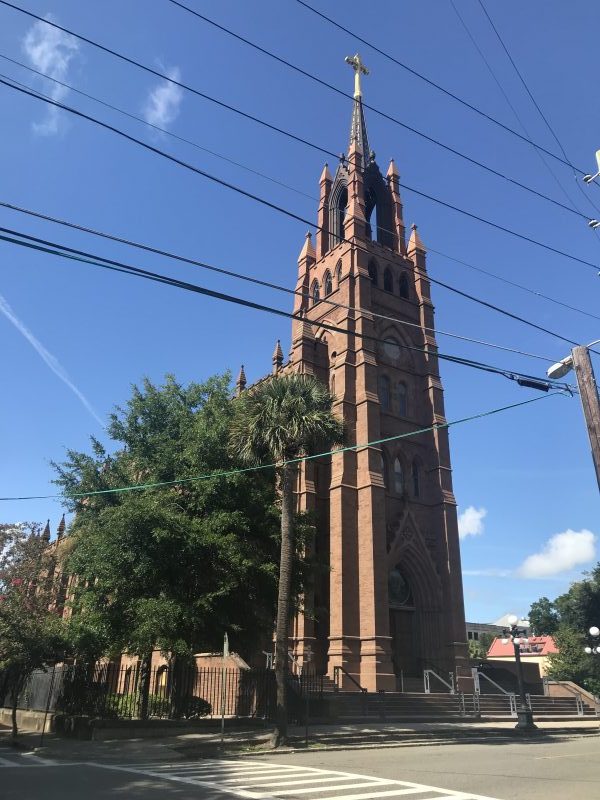 During the War of Independence from the British crown the bell towers were painted black to avoid being an easy target for the English vessels. 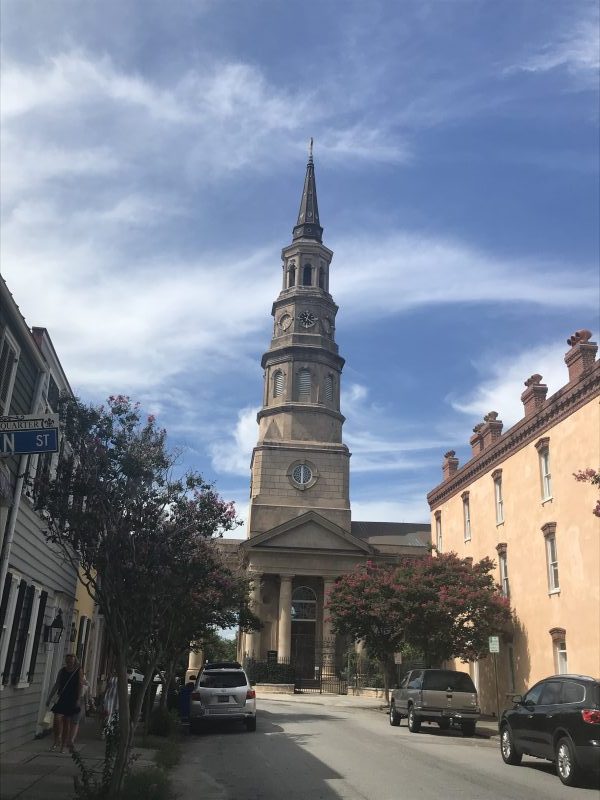 One of the most important churches is Saint Michael’s, built in 1752 on a small wooden Anglican church built in 1680, that makes it the oldest in Charleston. 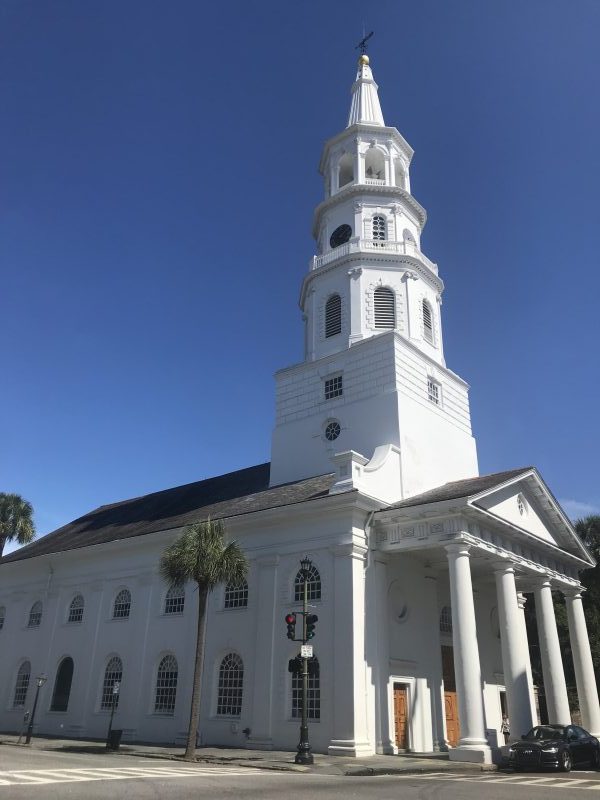 That small church was Saint Philip which, after being hit badly by a hurricane in 1710, was rebuilt a few streets further away, in Church St.

John Rutledge & Charles Cotesworth Pinckney, two of the signers of the Declaration of Independence are buried in Saint Michael’s cemetery. 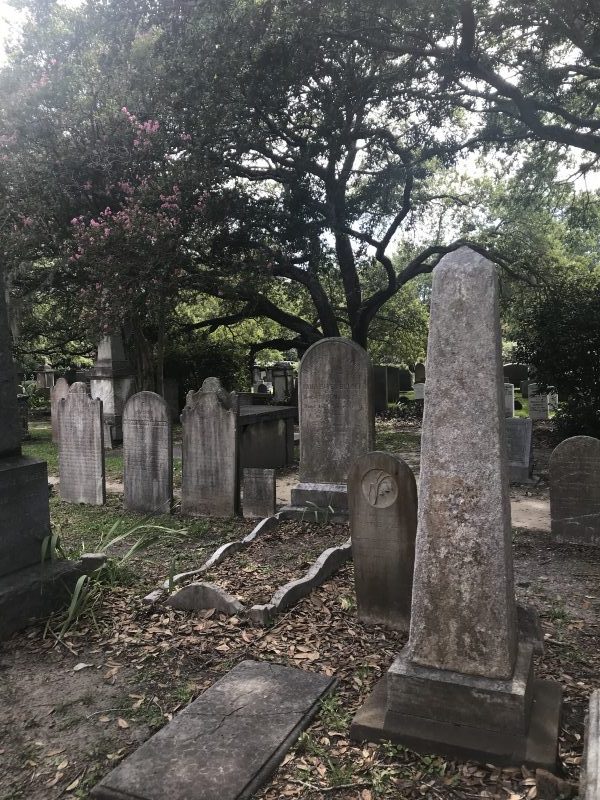 The grand, white & impressive church is located in a corner on the intersection of Broad & Meeting, known as “the four corners of law”. 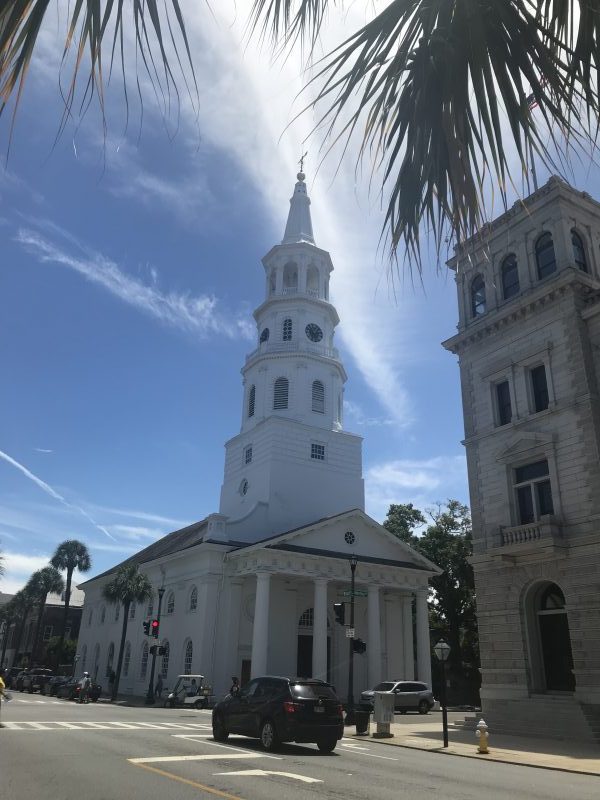 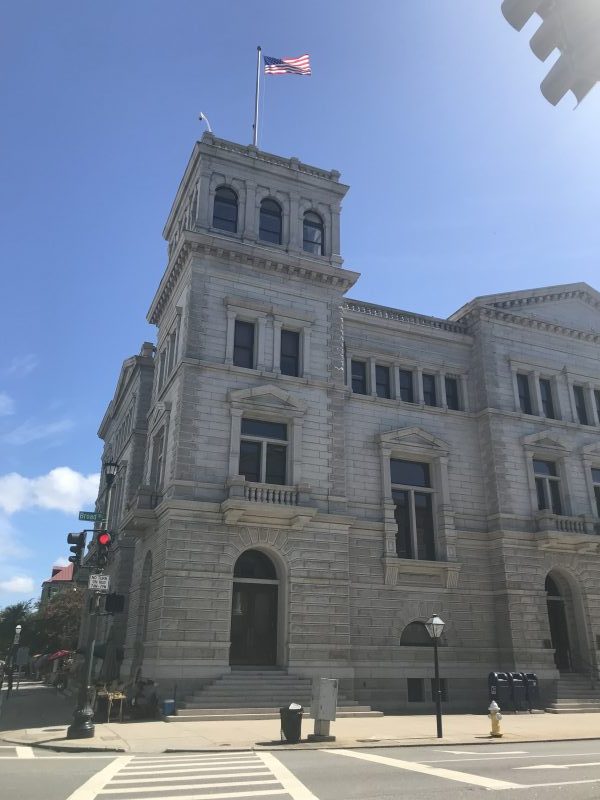 If you look for Broad Street on the map you’ll see it divides it, it seems that it also divides the southern area of the big fortunes, from the northern area of the merchants. I must say that the houses & mansions we find nowadays are very pretty regardless. I love their hanging baskets, plants on their balconies, their colours, all of them are so beautiful, I couldn’t choose one. 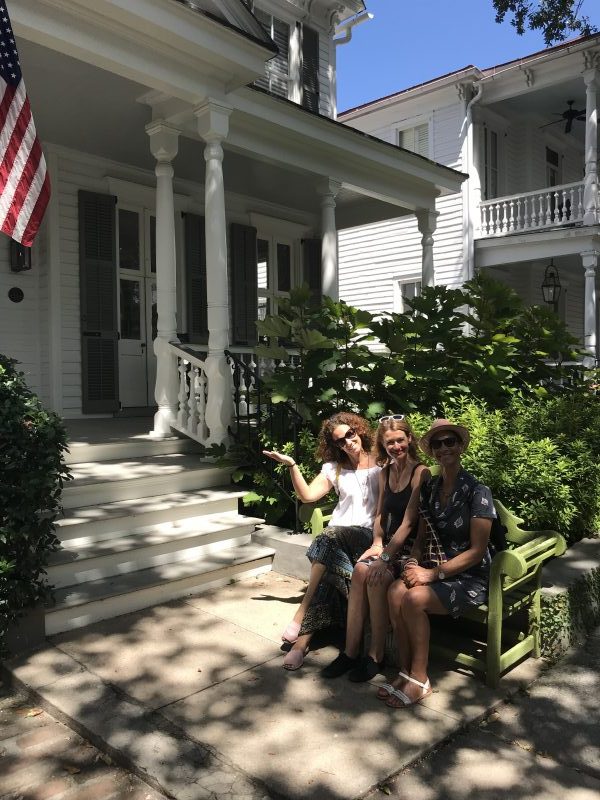 The book I have chosen today is “A thousand splendid suns” by the same author as “The kite runner” I told you already about, Khaled Hosseini. It is a feminine perspective of how the arranged marriages are in Afghanistan, the deep friendship born between two women, the arrival of the Taliban & how the country changes with this new political situation. A wonderful book that shows us that with love, everything is possible. 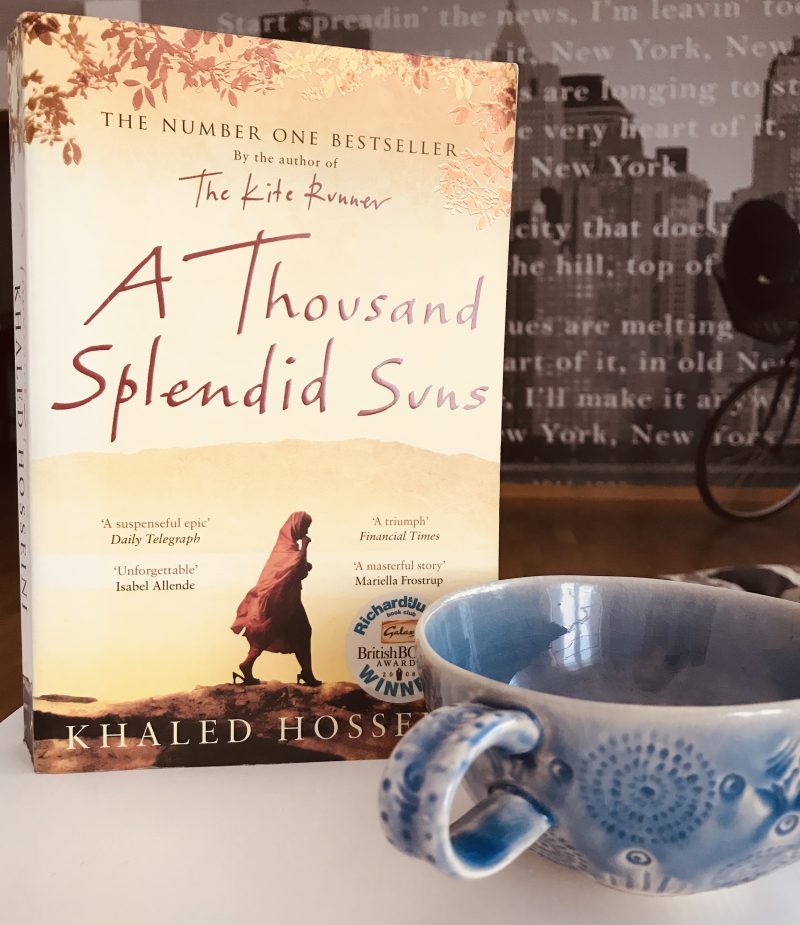 I will tell you more about this beautiful city on my next post, stay tunned!

4 thoughts on “Charleston, the Holy City”