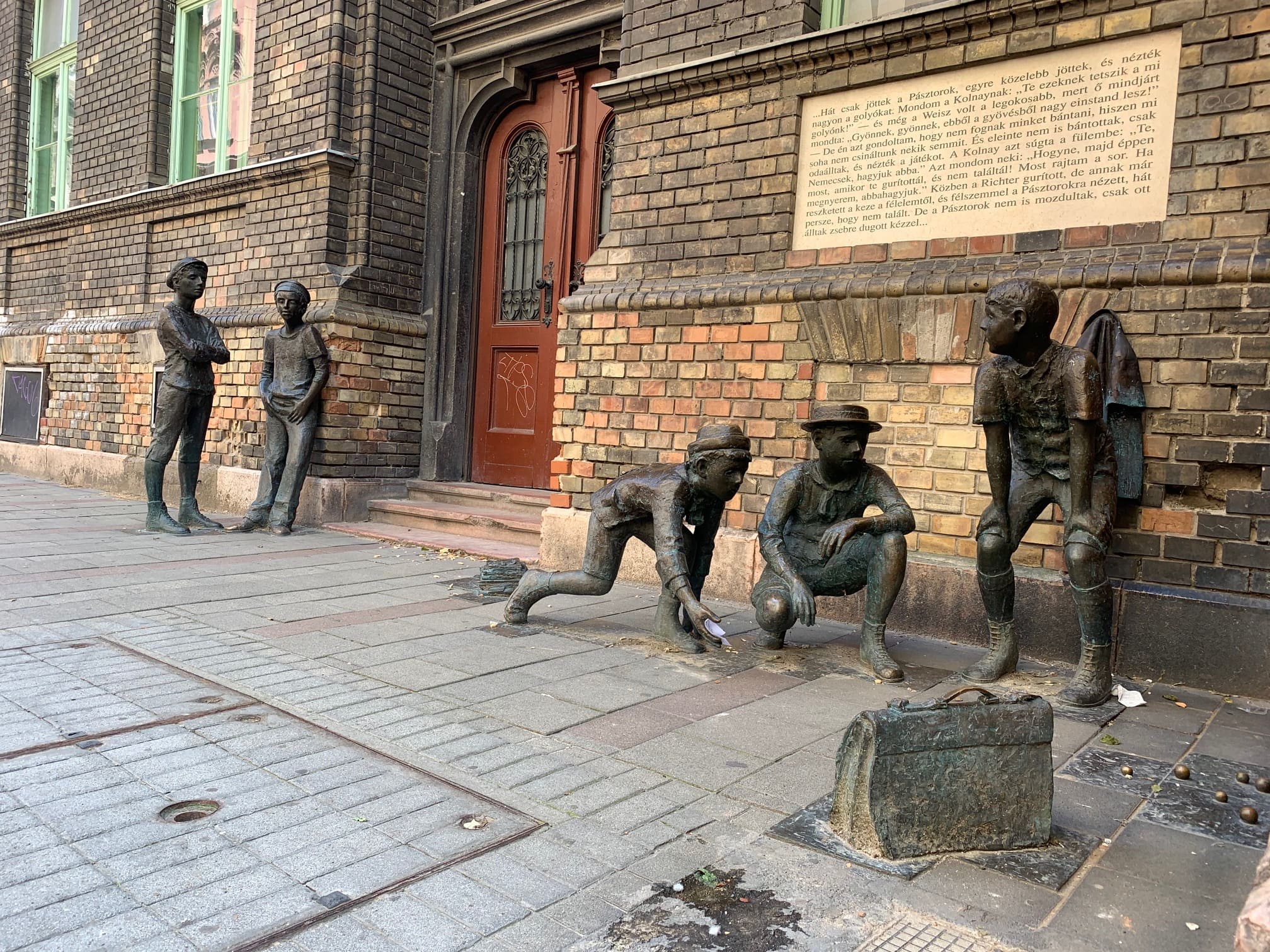 I walk and find them here and there, in the middle of the sidewalk, in a park, by the river. Budapest is a city full of curious statues. I encounter them, some are very pretty, I even have a favourite one. If you are thinking about the typical statue of a war hero, even though there are some, no, I am not writing about those ones, continue reading and you shall see.

I start near my place, I am going to the supermarket and there they are three of them, next to the Teleki Téri mini park is the politic and scholar Teleki László (1811-1861) 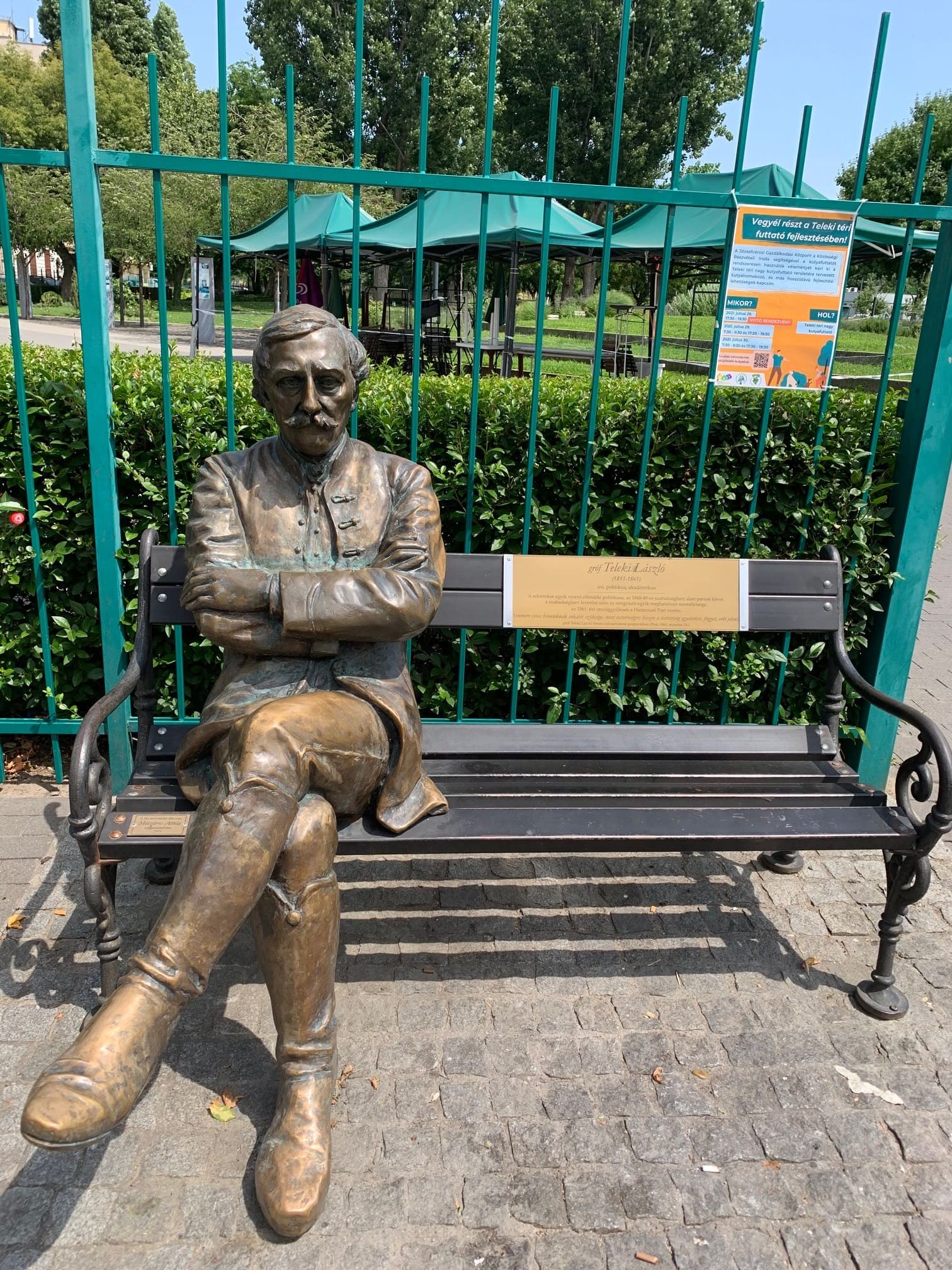 Opposite him, I find this happy man that shows me where Mr. Teleki is sitting. 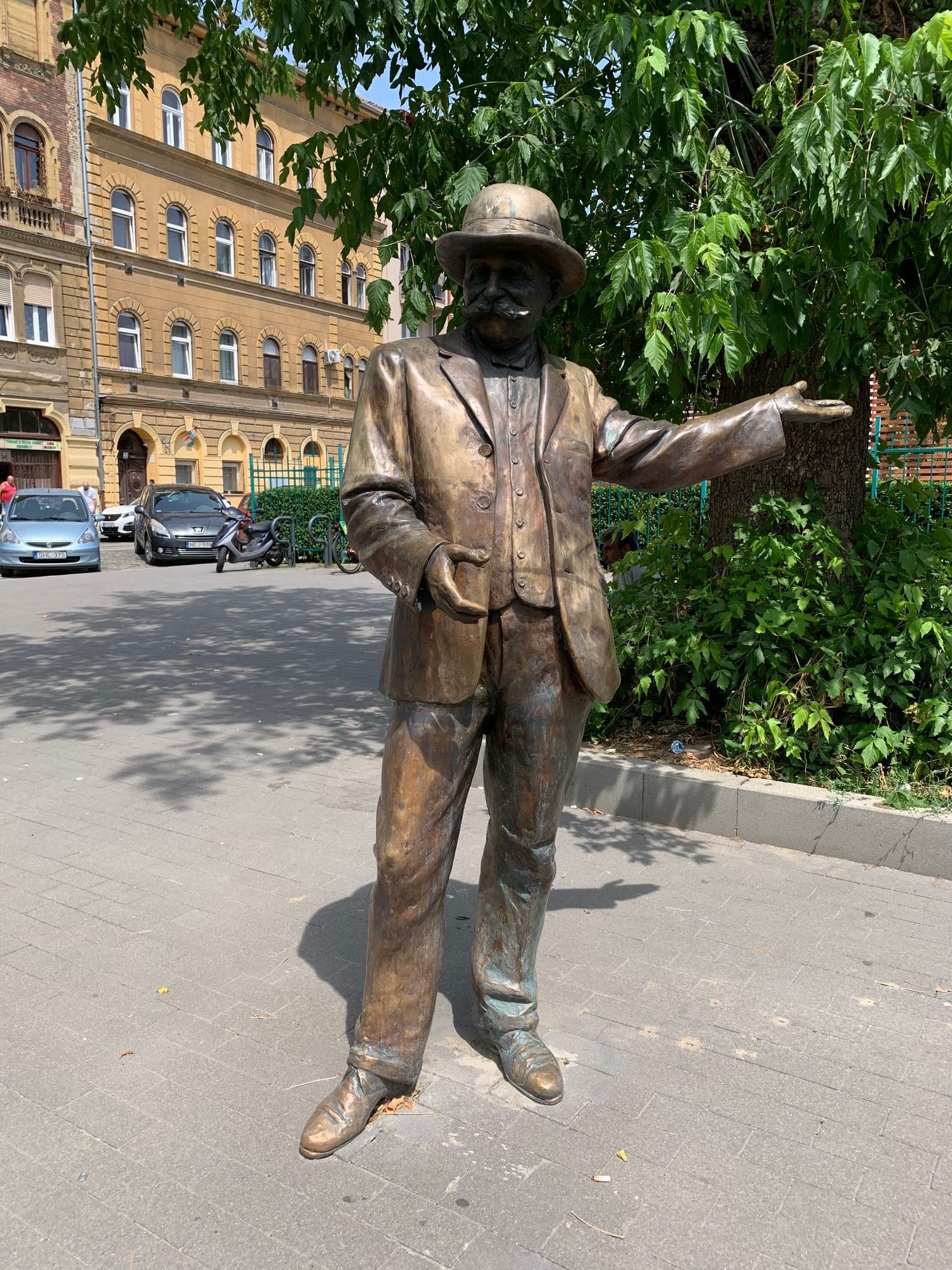 Two metres away is my favourite, the reason? There’s a doggie that is leaning on the ladder that holds a man who is changing a light ball, it is so cute! 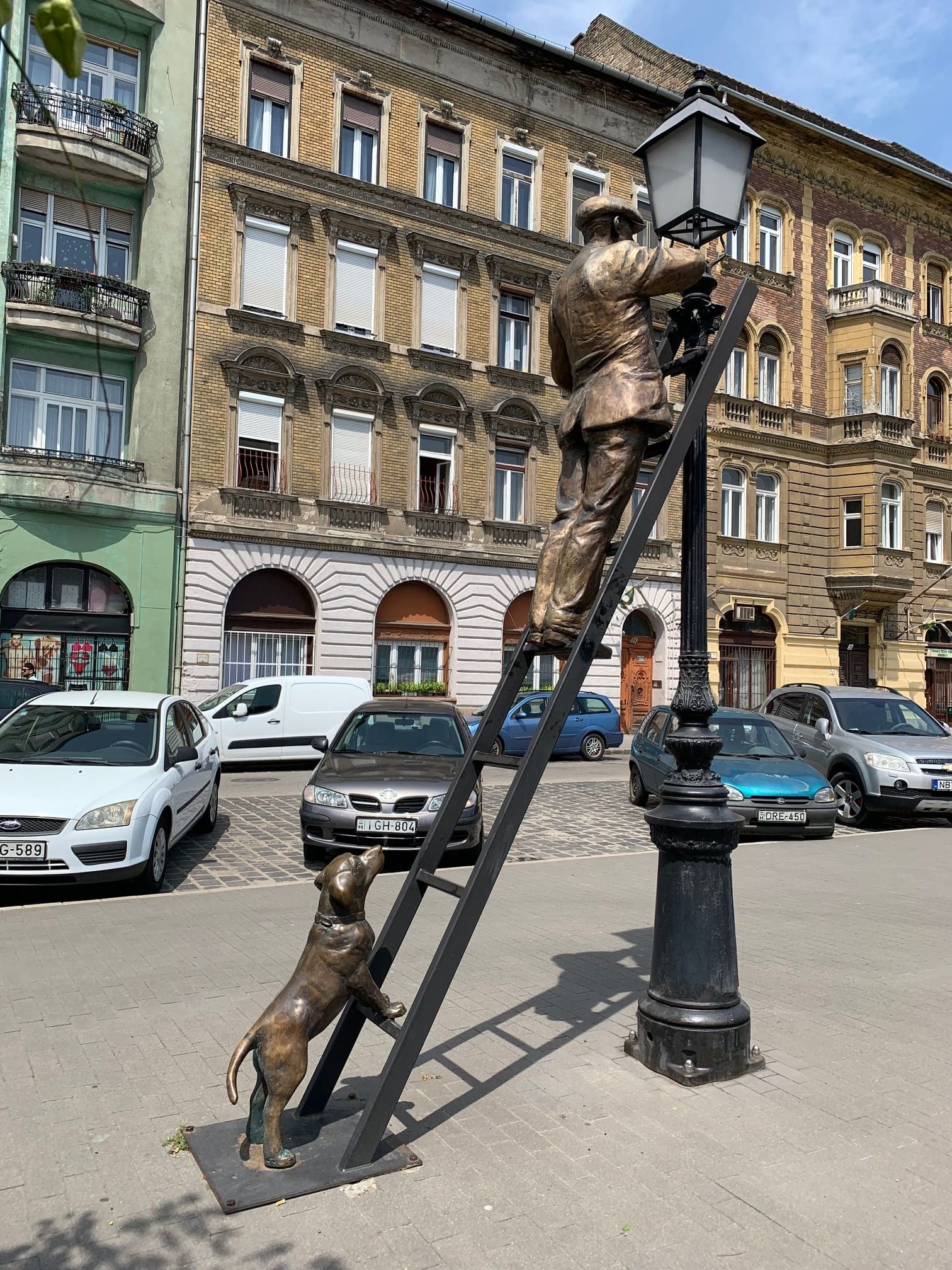 Two tramp stops away there’s a very popular one, “the children of Paul street” based on the 1907 youth novel of the same name written by Ferenc Molnar.

You’ll recognize the statue in Corvin St. (at least if you’re from my generation) yes, it’s Bud Spencer, former olympic swimmer and spaghetti western actor, very popular in Hungary; the communist regime didn’t allow most of the movie genders; he conquered the Hungarian homes through the TV screen. 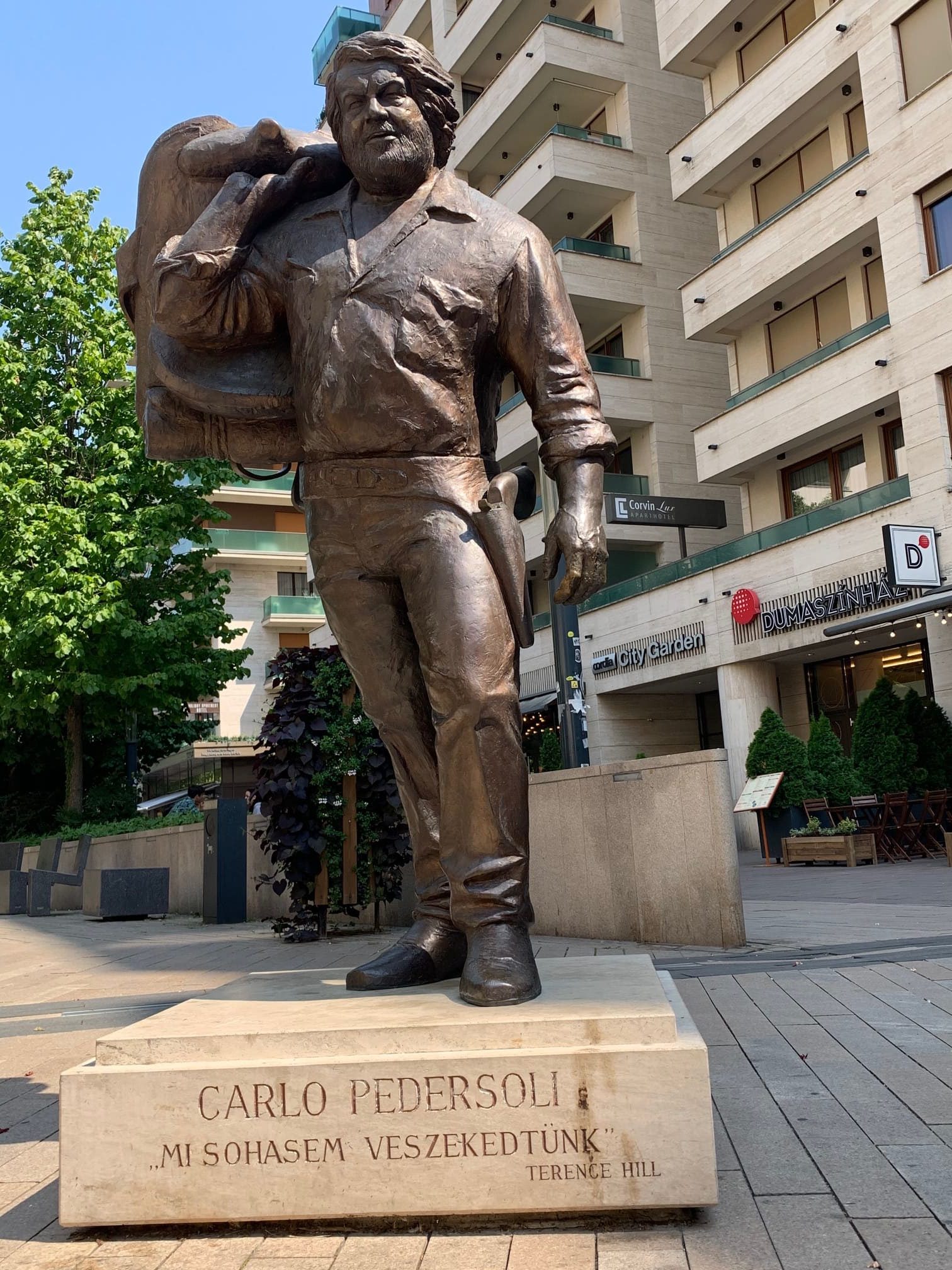 Next to the shopping mall we see a boy with a rifle. 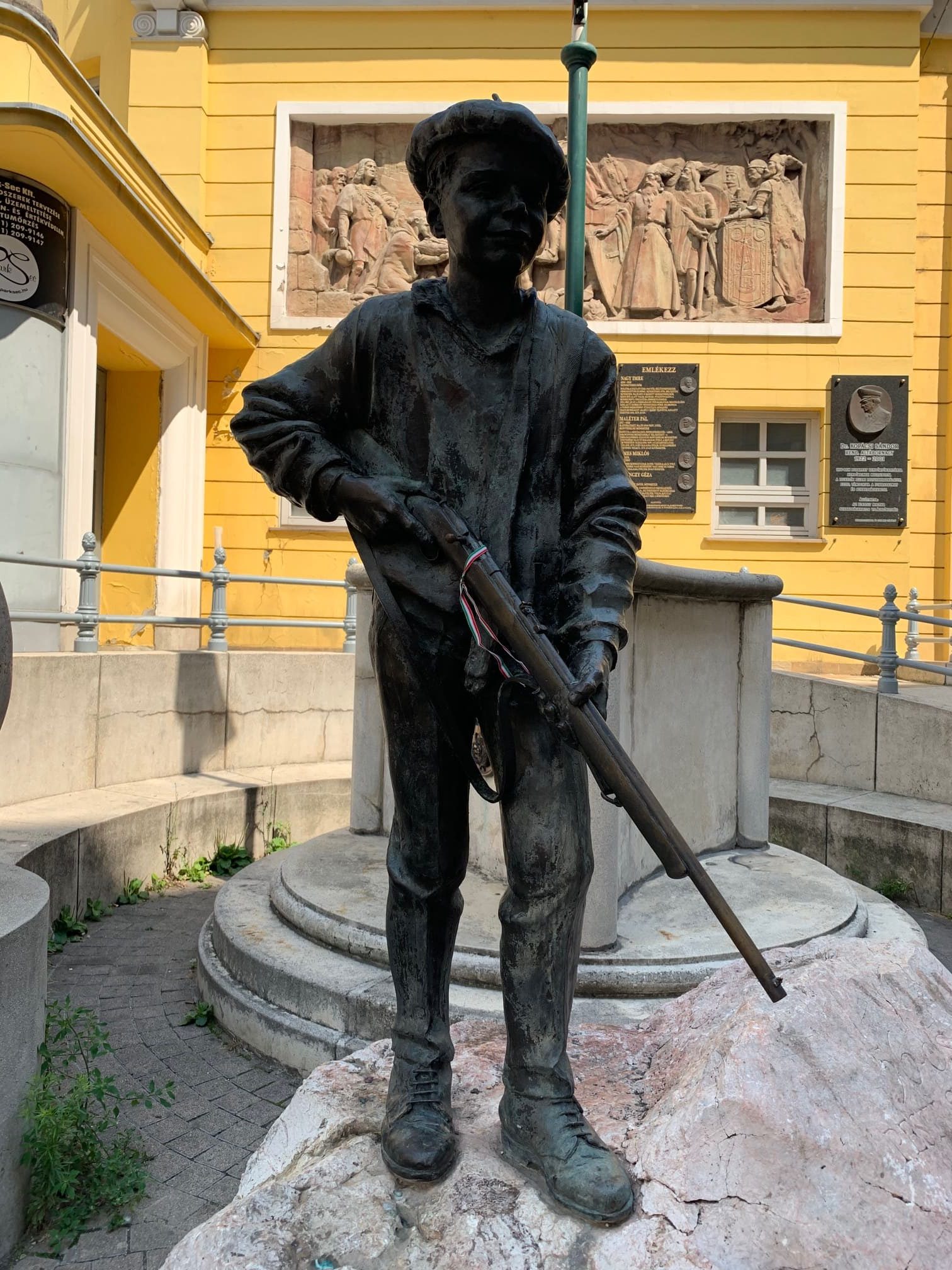 Crossing the main József krt. Street in the corner with Krúdy u there’s a little green patch, there, the statue of a girl who’s looking like she falls in the sea backwards, next to a fish and a sea urchin, on the other side, a boy with a Dickensian look who runs away from a dog that’s grabbing him. 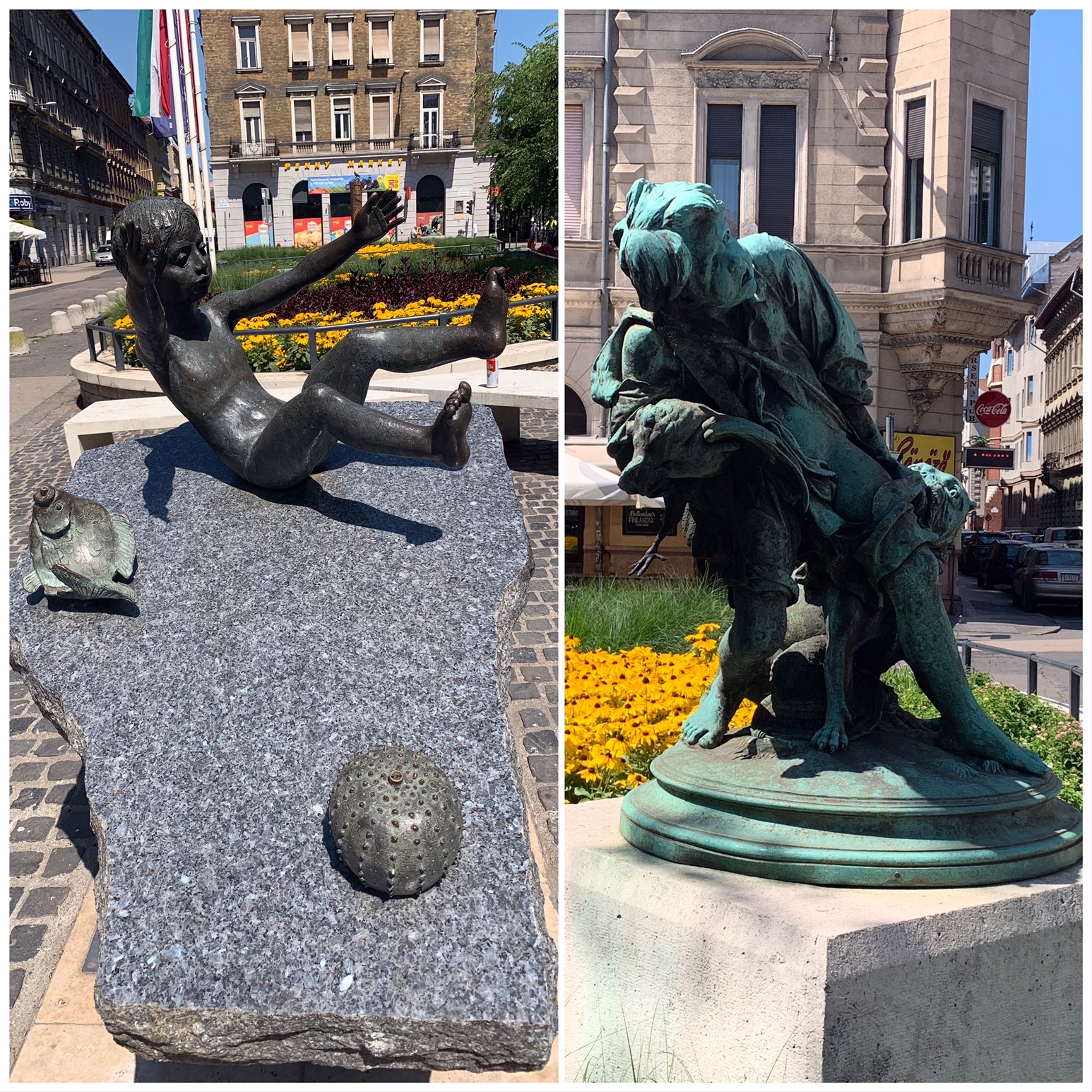 Going towards Margaret bridge there’s another popular character from the 70’s TV, Lieutenant Columbo and his dog, having an immortalised chat. It’s on Falk Miksau u street, who was an editor for a Hungarian paper and the ancestor of Peter Falk, the actor who gave life to Lieutenant Columbo. 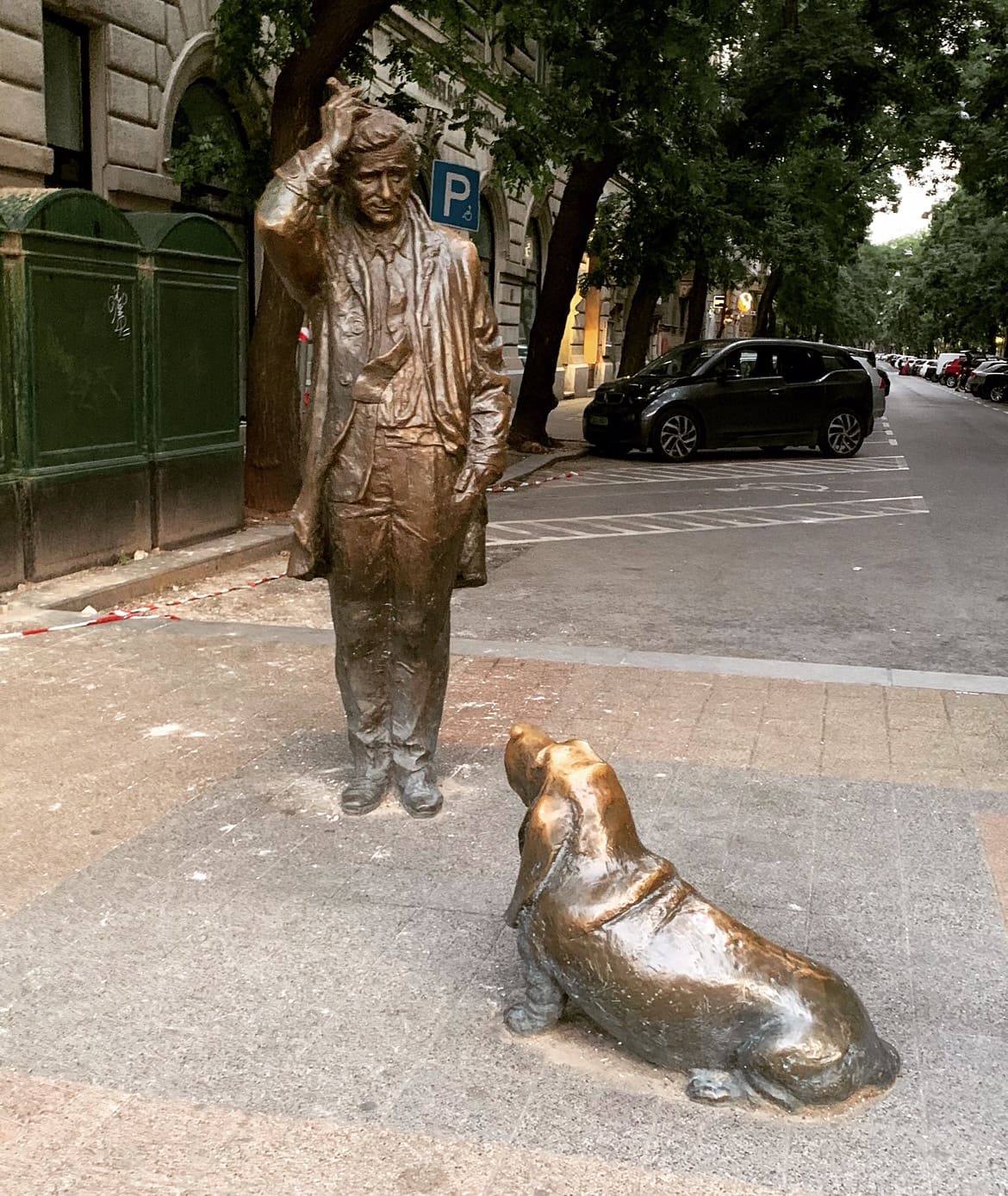 A few metres away, in a small park overseeing the river on a bridge, that’s part of the statue, is Imre Nagy, a Hungarian politician. 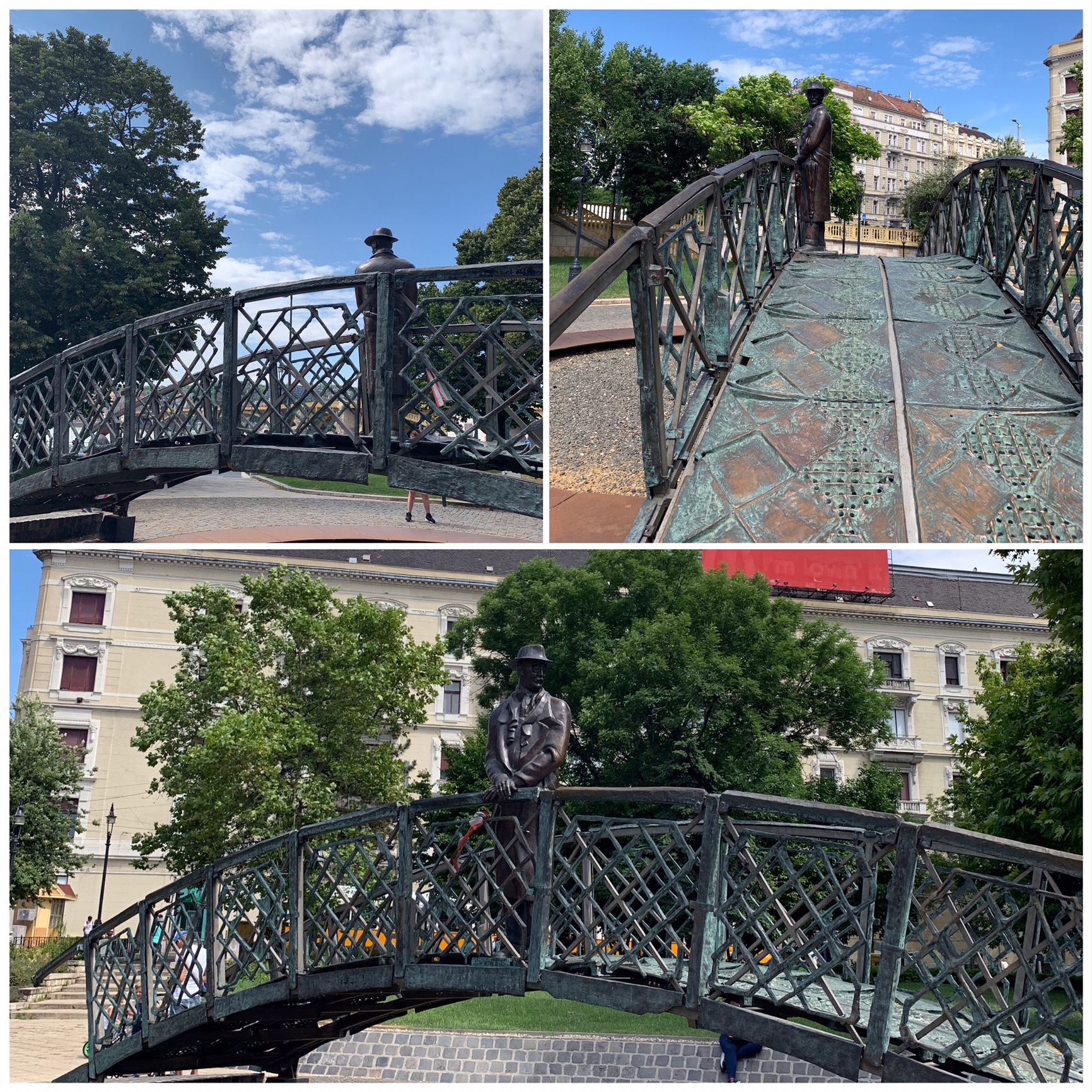 On a previous post where I talked to you about the City Park, right there next to the Dracula’s castle is the Statue of the Anonymous, a character who seems straight out of a Halloween movie and represents a chronicler (maybe King Béla II), with some eyes that impress to look at and a quill that must be touched if you’ve lost the inspiration, the legend says. 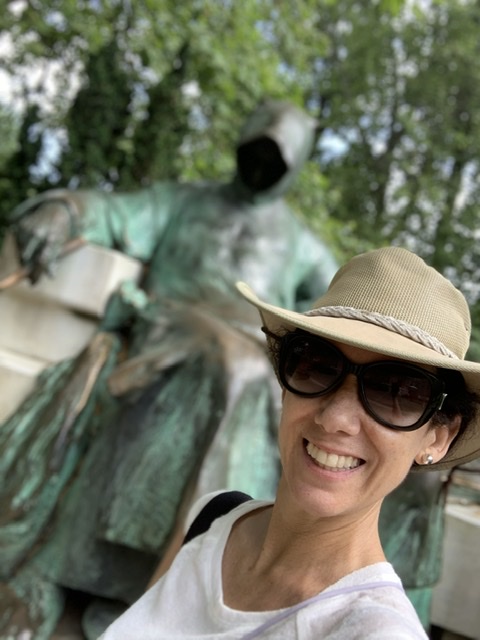 Heading from the Four Seasons Hotel to Saint Stephen Basilica is the charming statue of the fat policeman, word has it that if you touch his belly you’ll be able to eat without putting on weight. 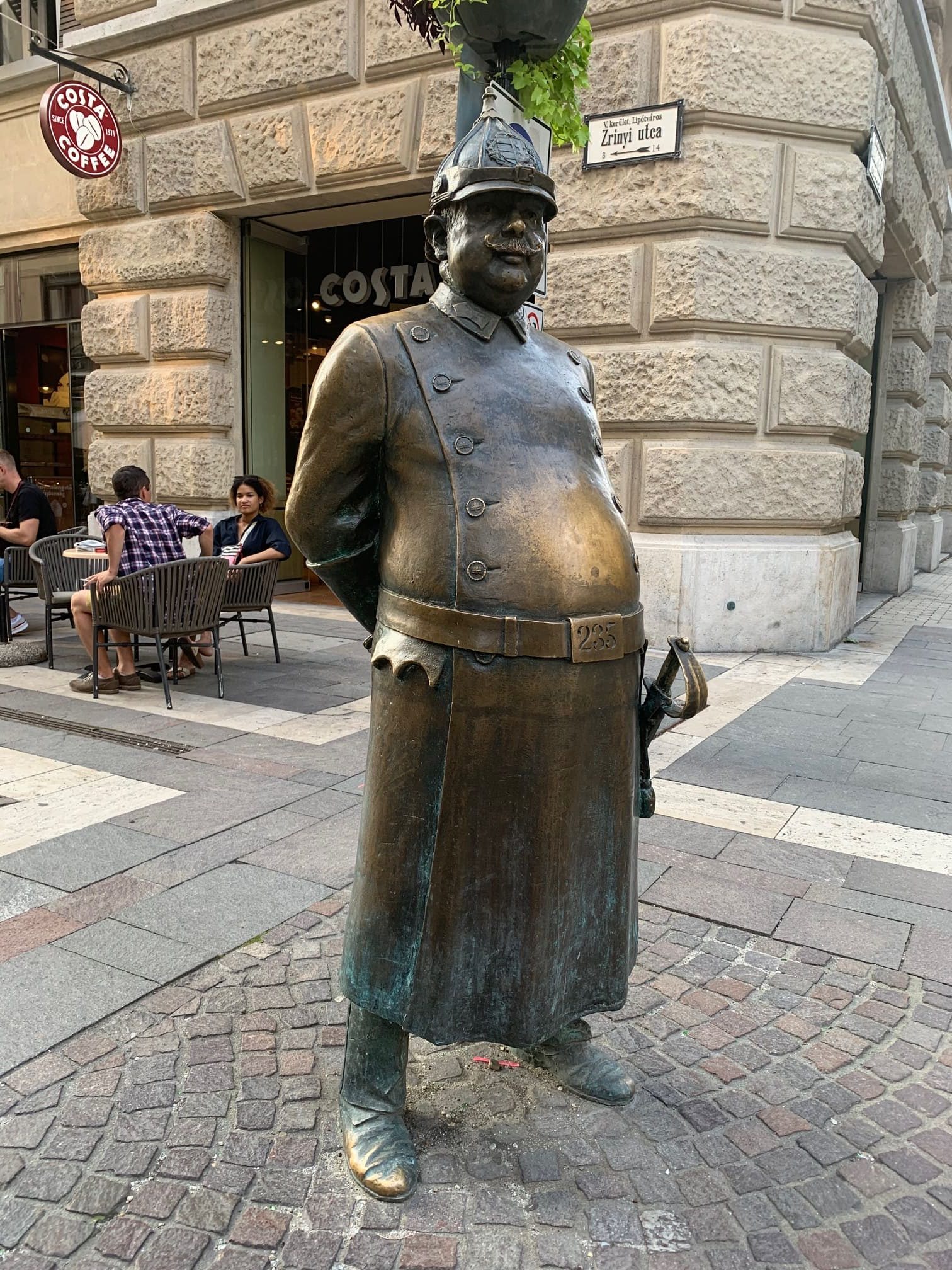 Do you remember I showed you Franz Liszt near Andrássy? 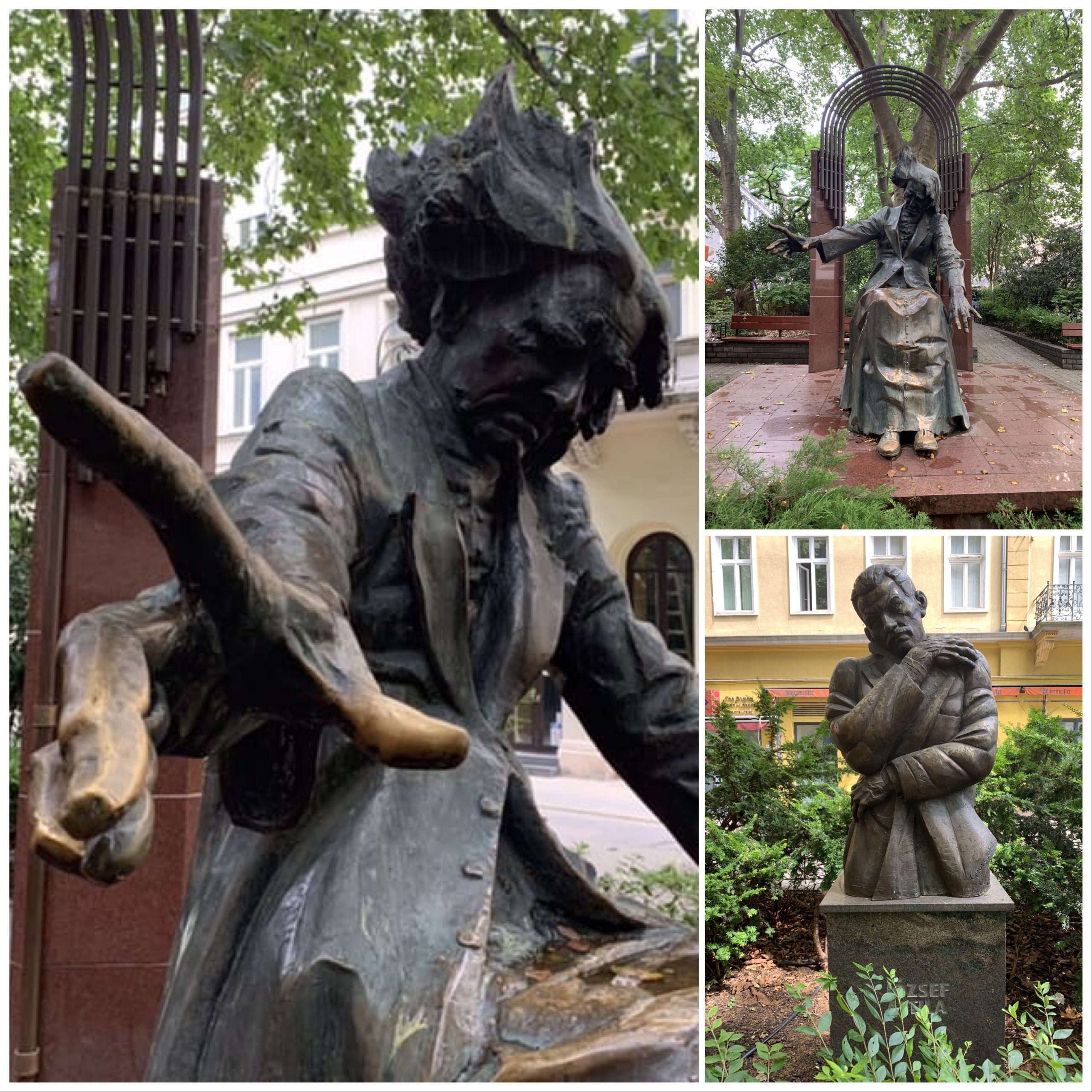 I promised you I’d talk about the statue of Jószef Attila “the grand proletarian poet” hugging himself, it’s not the only statue we’ll find of this loved Hungarian poet.

On another one we see him pensive, near the Parliament, looking at the Danube emulating his poem that says:

I sit on the quayside by the landing,

a melon rind comes drifting on the flow,

I reflect on my fate, quietly observing

surface ripples, sensing the calm below;

as if my heart had been at the source 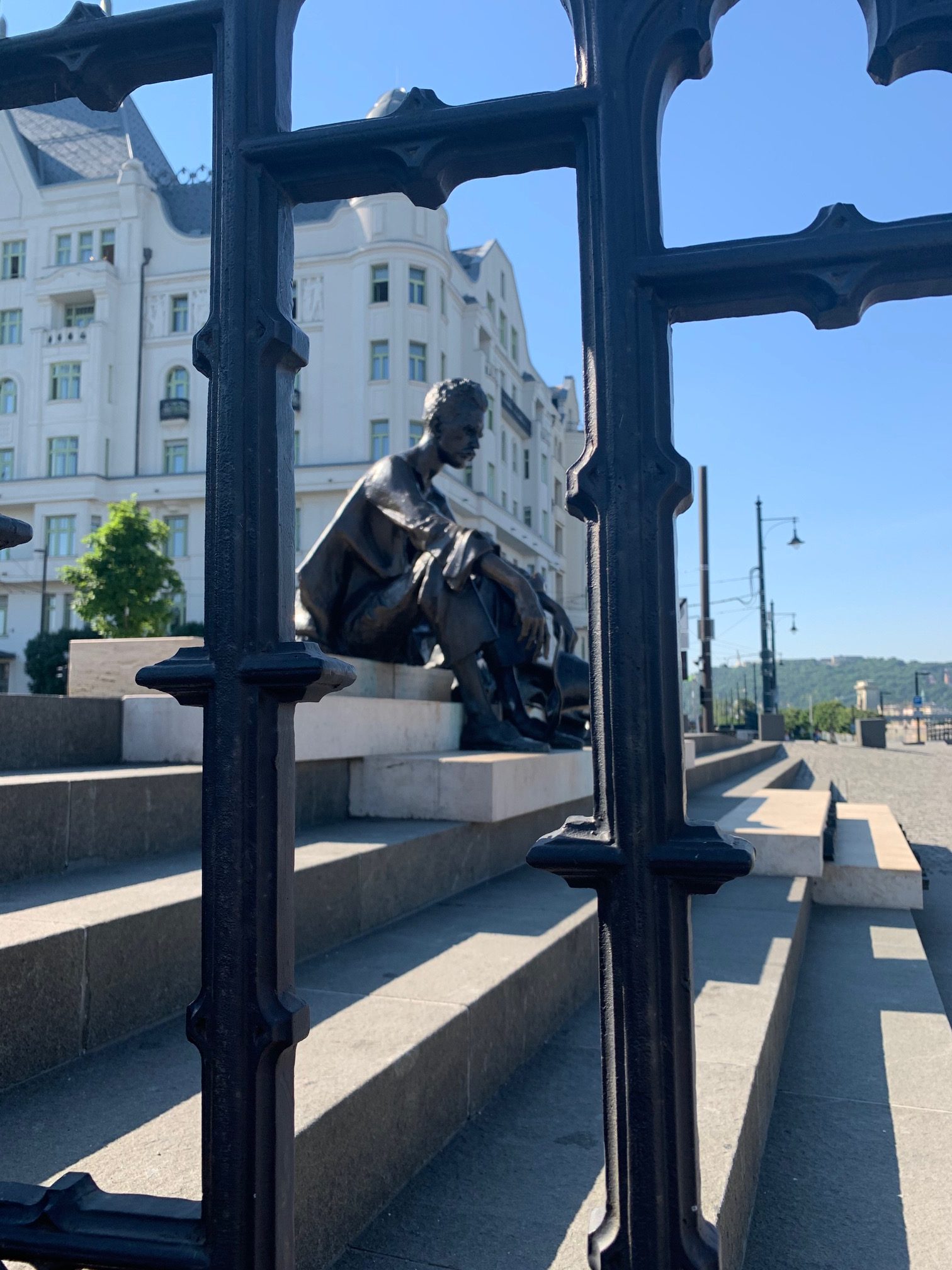 In Buda, the other side of the Danube, rests a pretty thing, maybe the cutest and smallest statue of all, the Great Ho-ho-ho Horgasz, a popular character cartoon of the 80’s in Hungary and the tender note, especially before I am about to tell you. 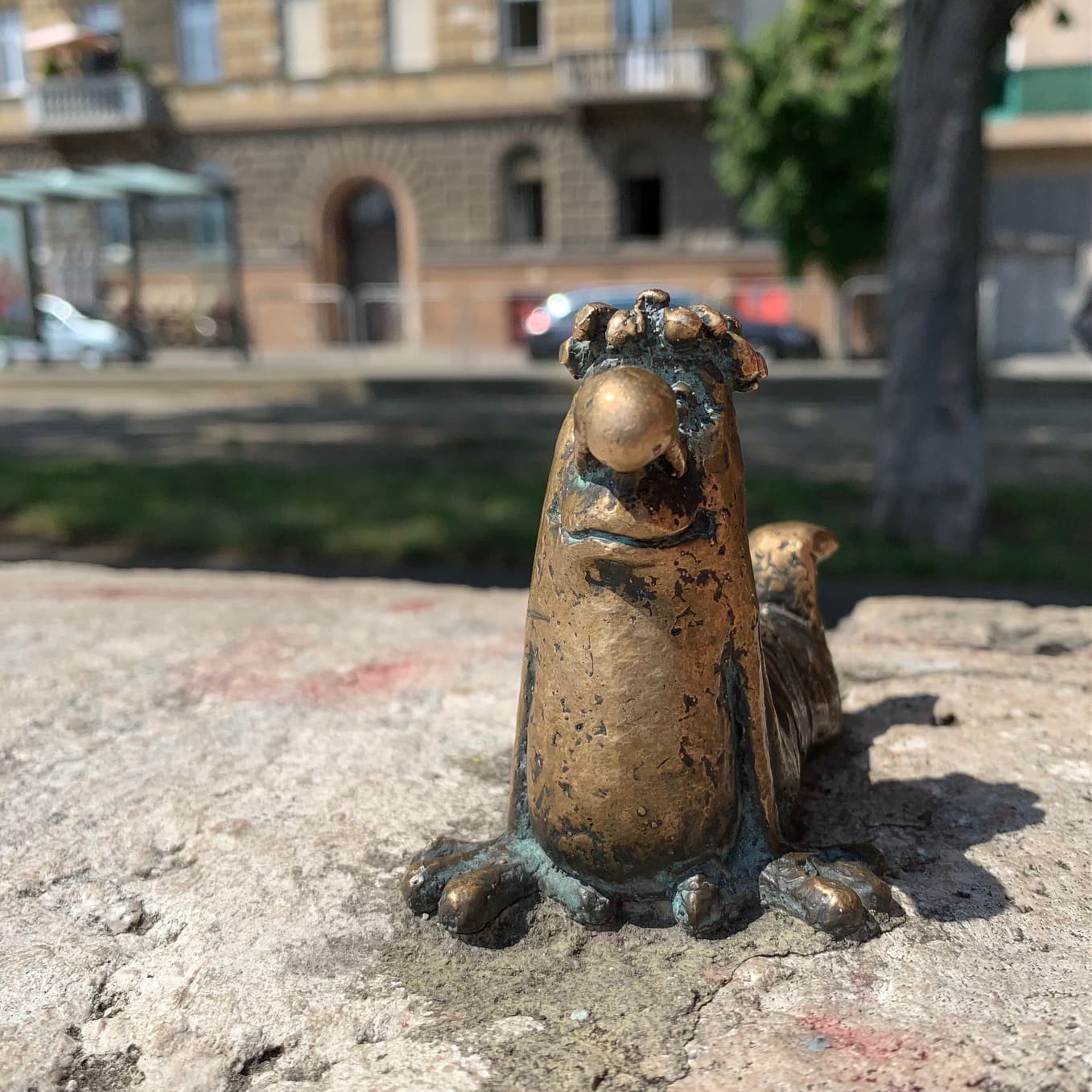 Recently, also next to the Danube, a sculpture was created in tribute to the Jewish victims of the fascist Arrow Cross party during the Second World War, in the form of sixty shoes. The story is chilling as they were sometimes tied in pairs by the feet, shot at one who fell into the icy water dragging the other. The shoe represents a scarce and expensive commodity, they were forced to take them off before shooting. Creepy, and I wonder, have we learnt something? Let me doubt it… 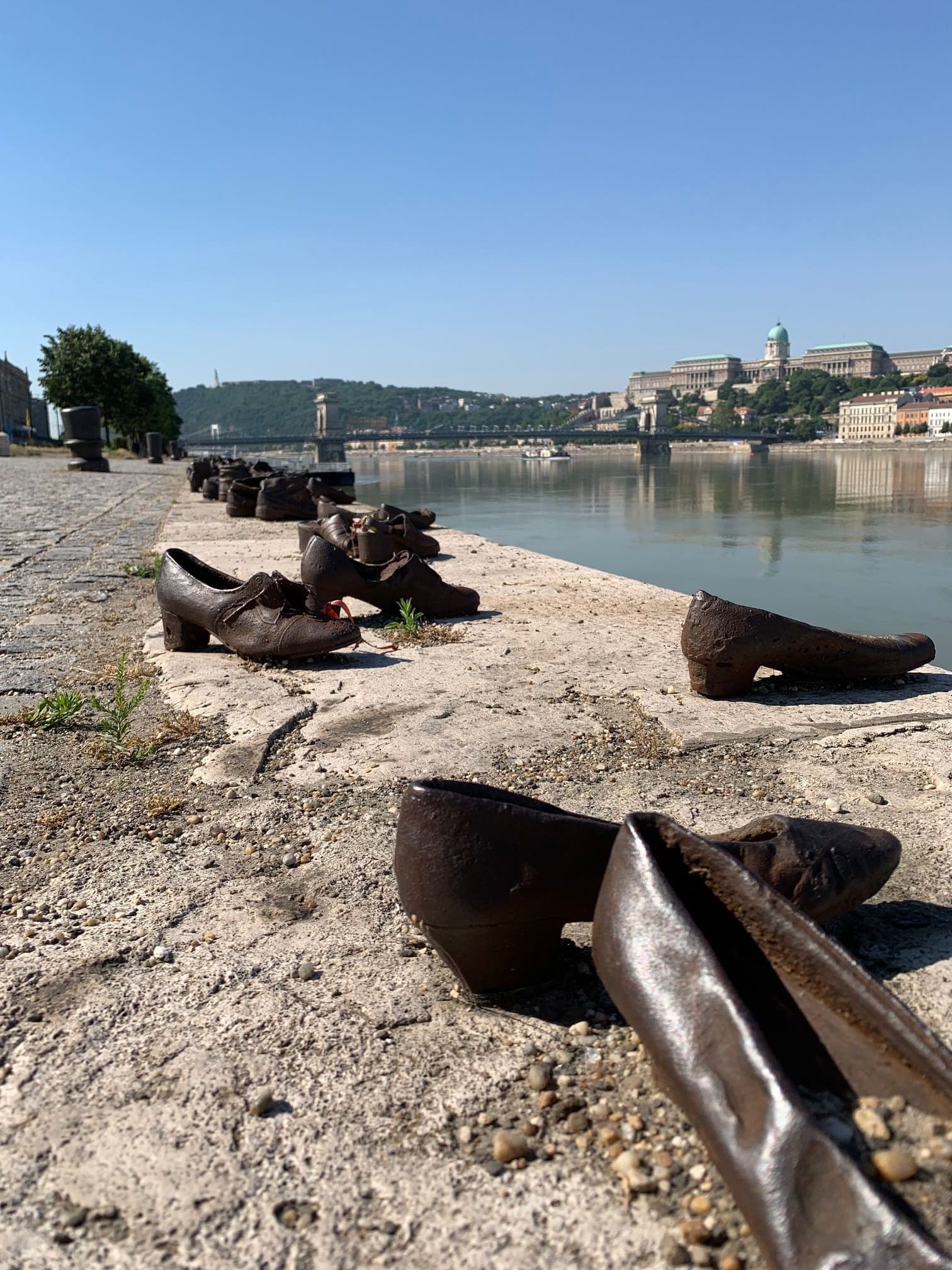 Three streets further back is Freedom Square, where two American presidents pose, Ronald Reagan whom they consider as a symbol in the fight against Soviet communism. He stands next to the American embassy as is former President George Bush, who supported democracy in the country and the anti-communist struggle. 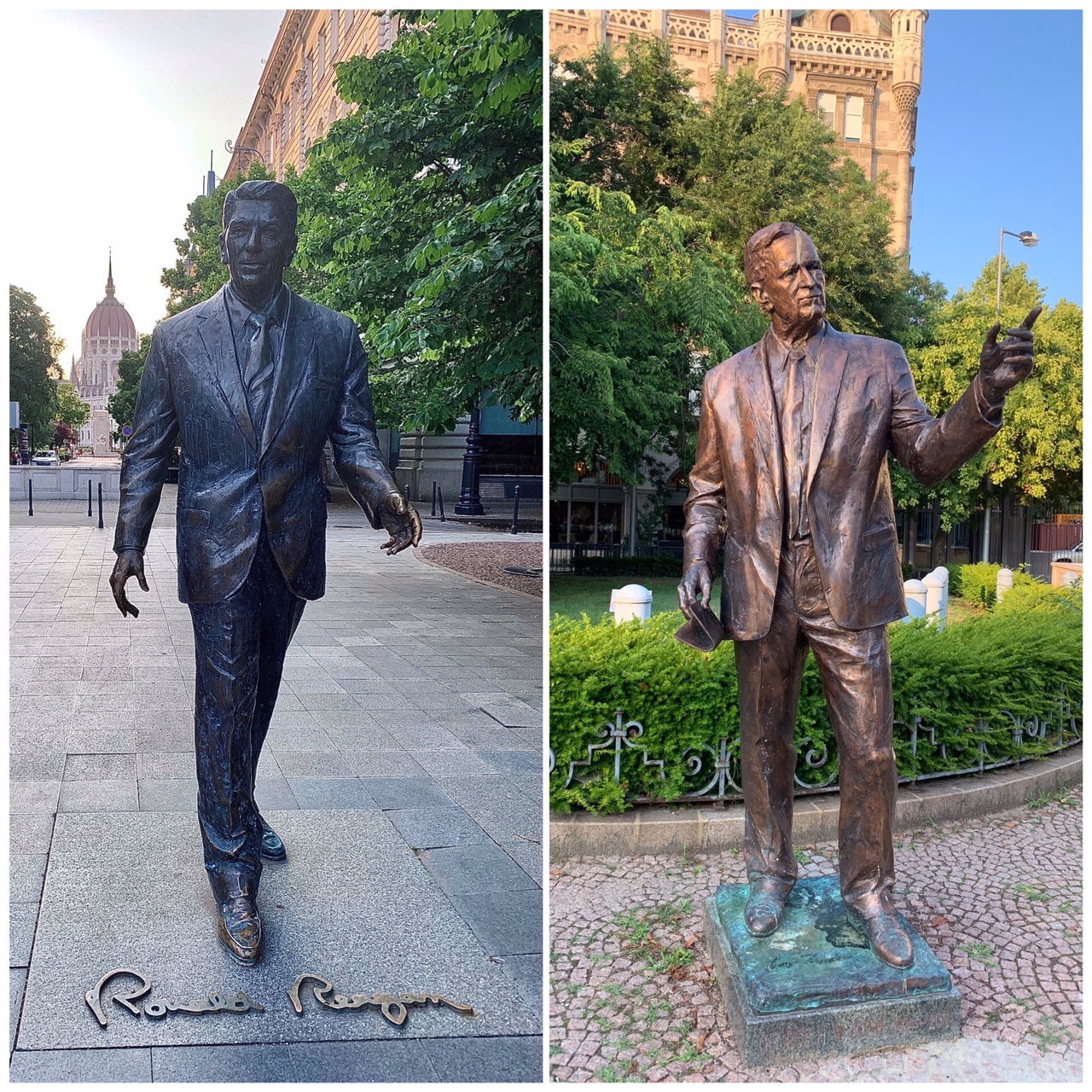 Returning to the riverbank in front of Buda Castle seated, happy, is the representation of the daughter of the artist László Marton, who created this small statue called “the Elf” or “the Princess of the Danube“. It seems that her daughter used to play princess wearing his bathrobe and a crown made of newspapers. 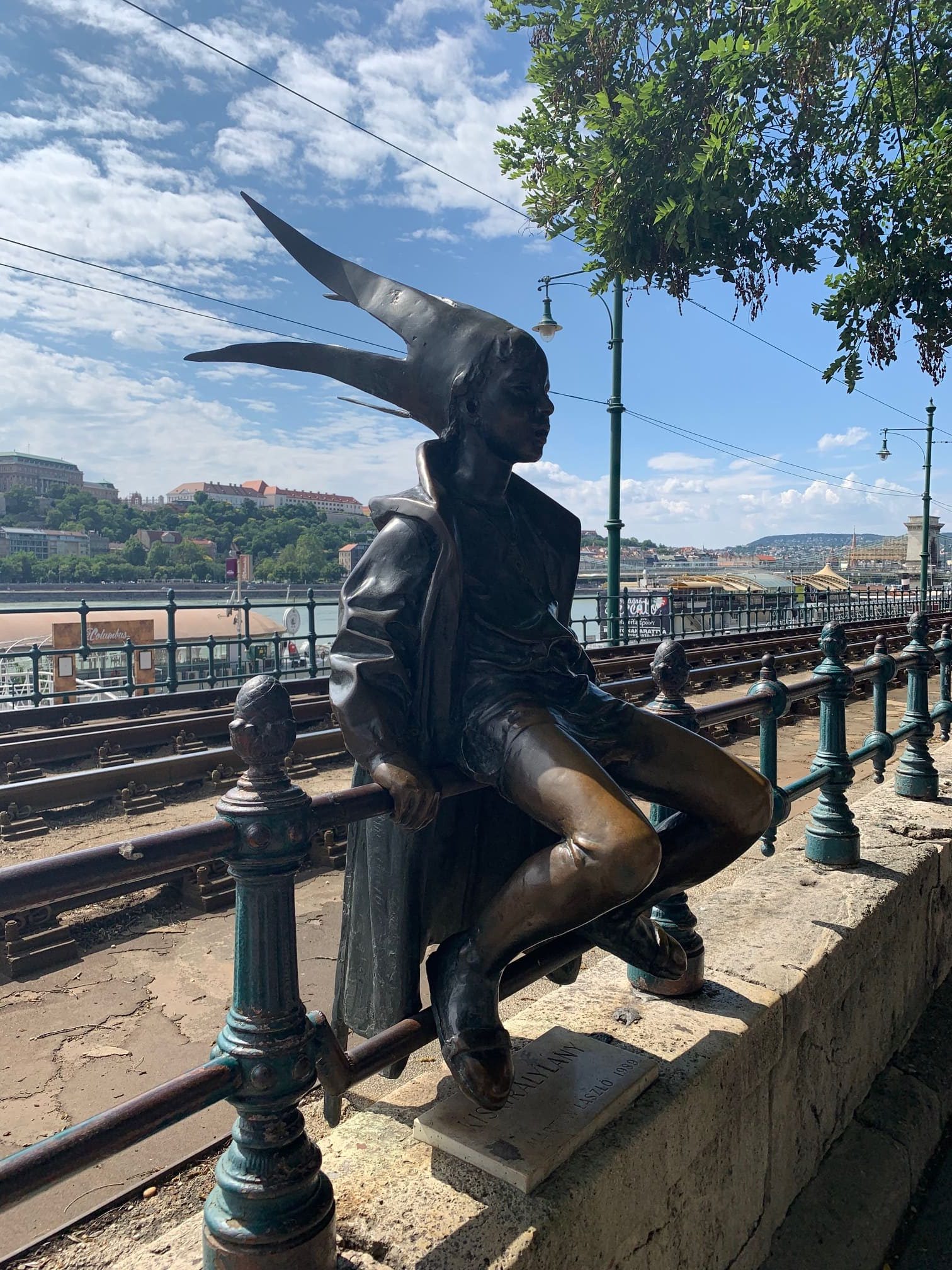 Next to it is another of the endearing statues, perhaps it is the fact that one of the two protagonists is a dog holding the ball, and the other a girl who asks for it. 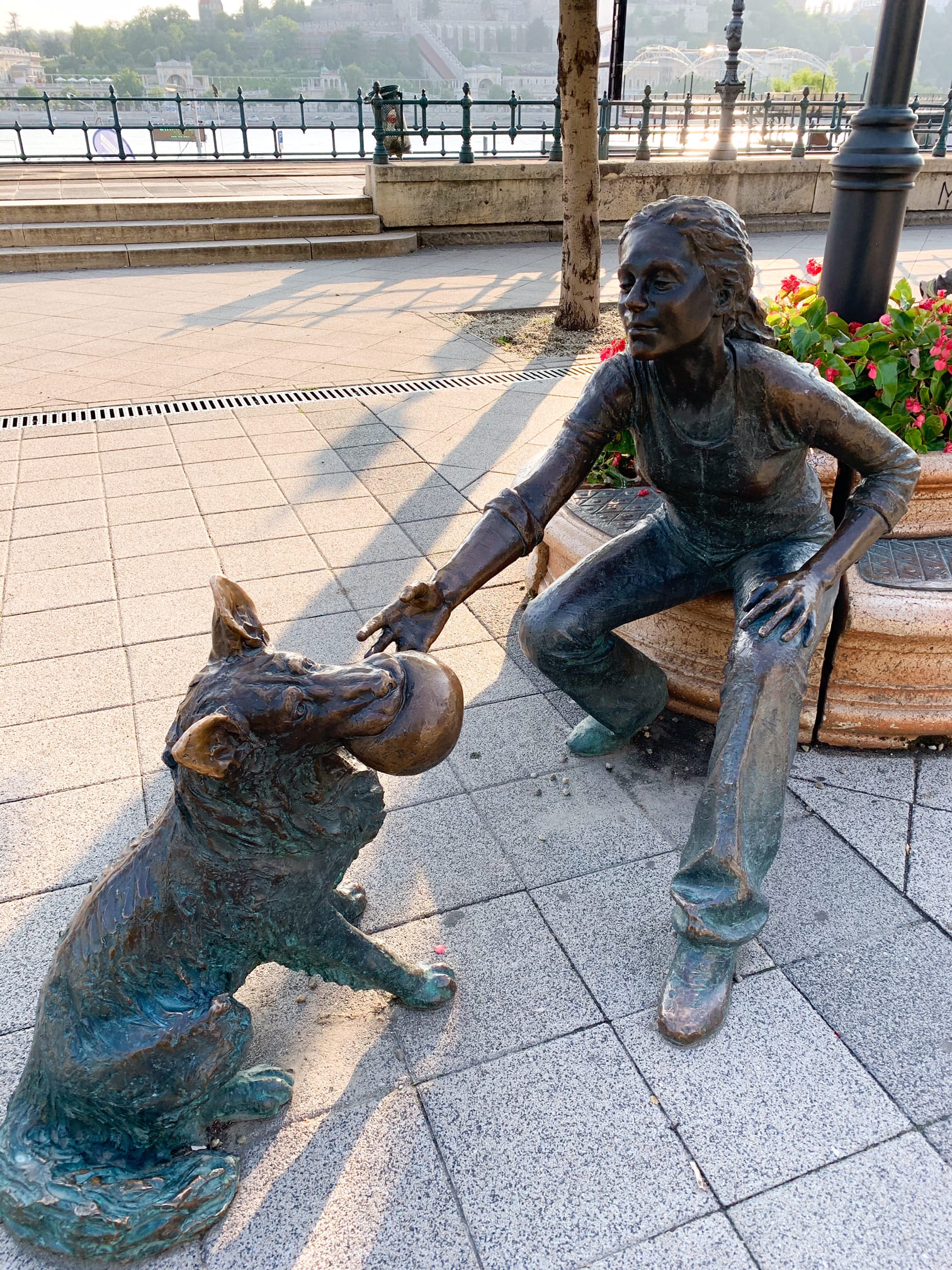 The painter Ignác Roskovisc (1854-1915) is found painting the beauty of the river. 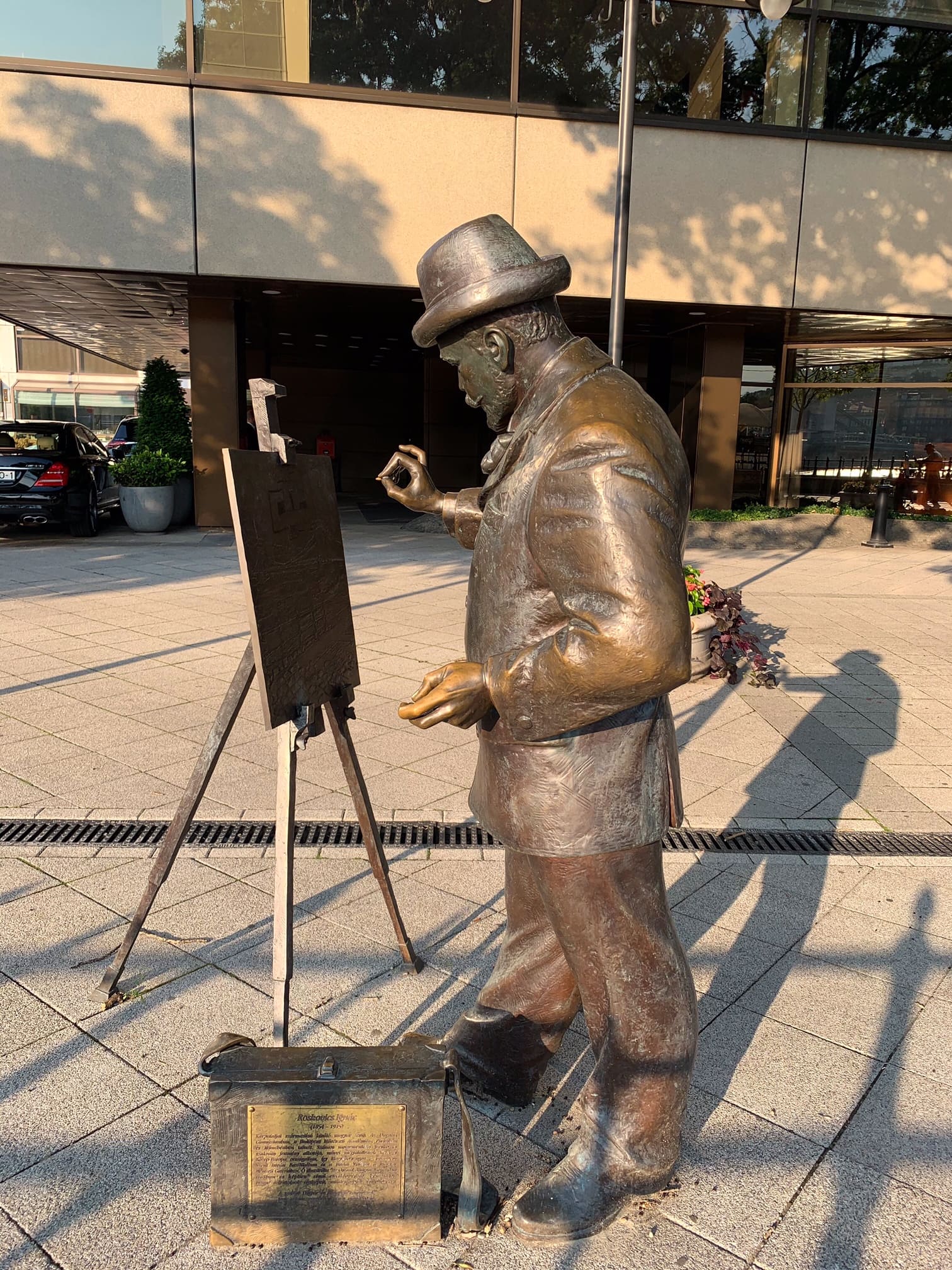 The masters of the Garden of Philosophers of which I will speak to you very soon. 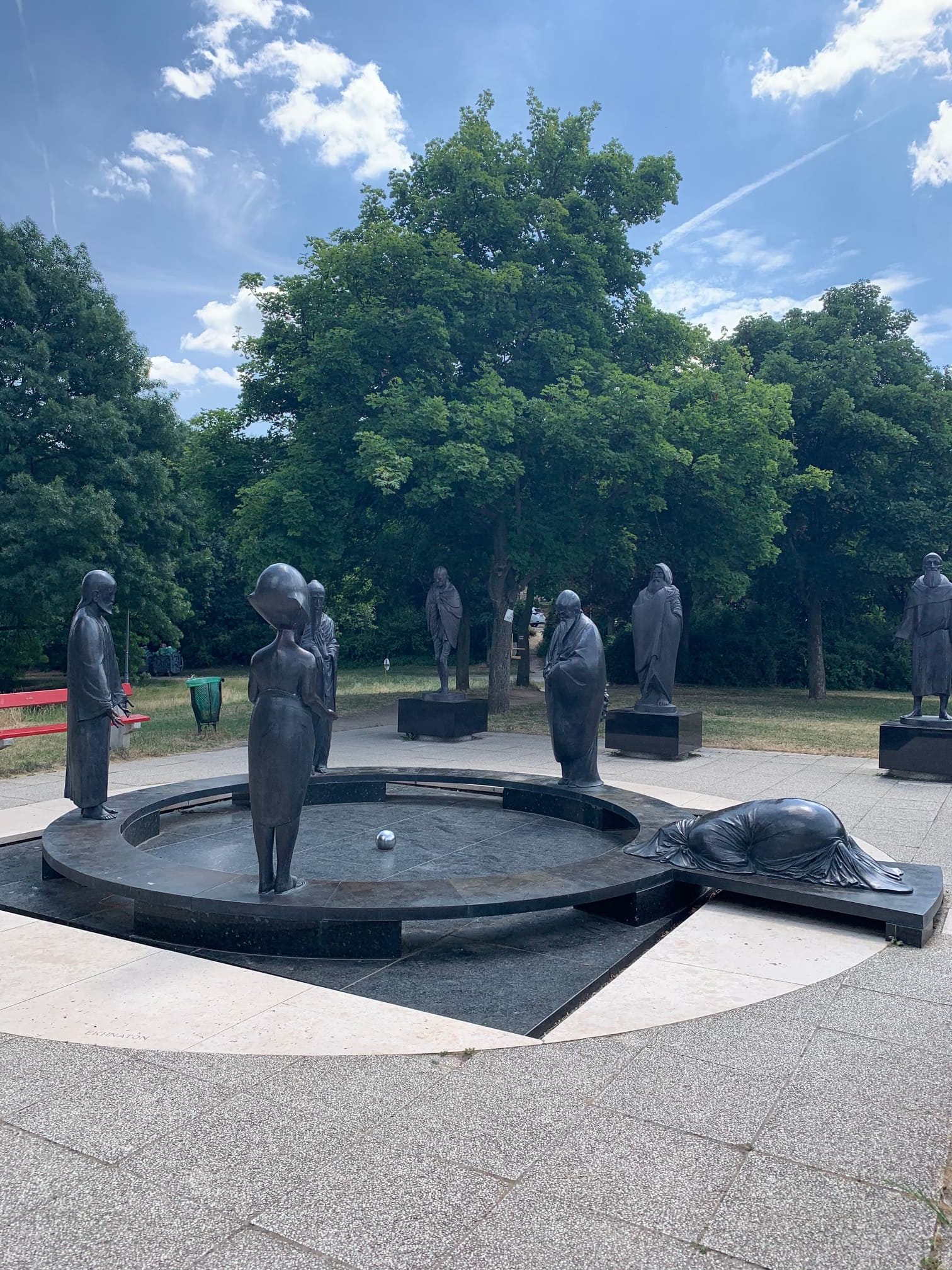 Looking for the statues that populate this city makes it more interesting, fun and colourful, it becomes a kind of gymkhana. There are many more that I will discover on my next visit, will you accompany me?

Today I have chosen the company of a book that was published on my birthday on April 2, 1997, its author, Patrick Modiano, is the winner of the Nobel Prize. Dora Bruder is a young Jewish teenager who disappeared in 1941 in occupied Paris. Modiano searches for her, investigates her and somehow intertwines his own story with that of this 15-year-old girl. An autobiography written by a novelist, brilliant. 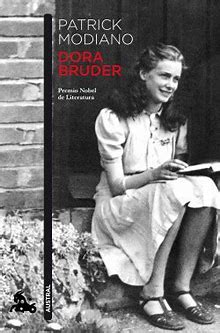 How to forget the “Open Book Fountain” dear readers. 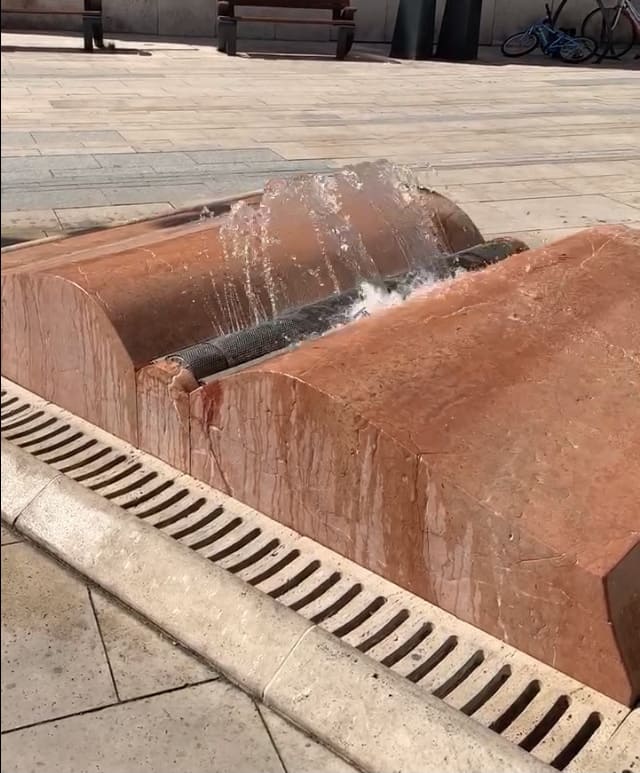