The colour of Singapore 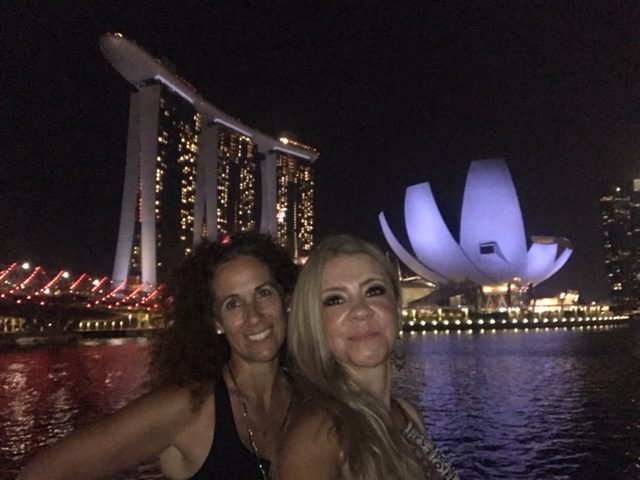 Singapore is a sovereign city-state formed by sixty three islands which became independent from Malaysia the 9th of august, 1965, only fifty four years ago.

Many years ago I visited this island country very unknown to me; these days the image that represents the modern & wealthy Singapore is the Marina Bay Sands, a building that stands tall in its beautiful marina. 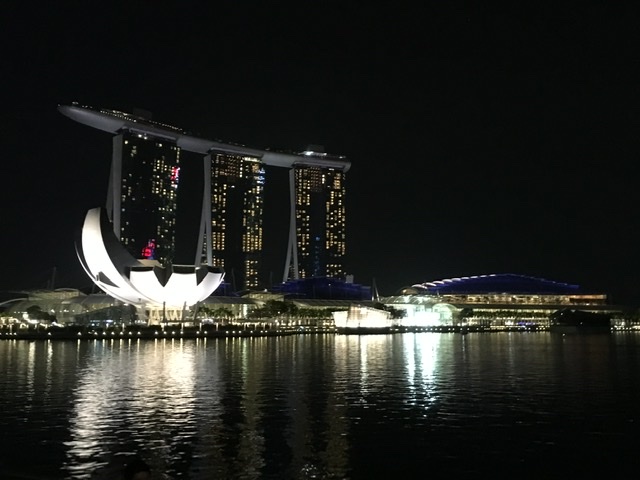 I like to enjoy the best views of the city’s skyline, either from its lower terrace. 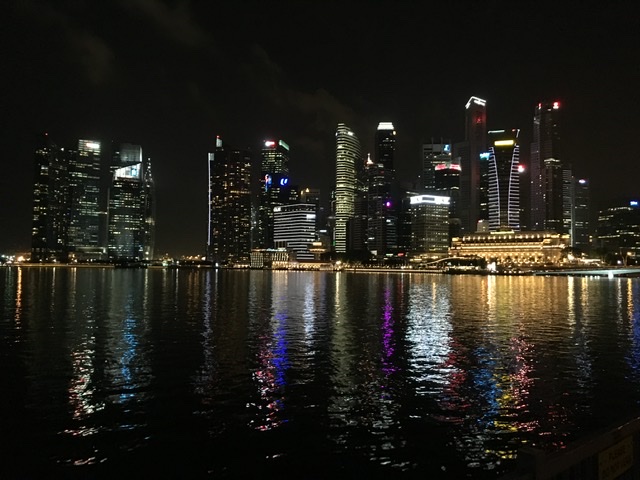 From its stunning roof top, having a drink whilst waiting for the sunset, or even from its infinity pool. 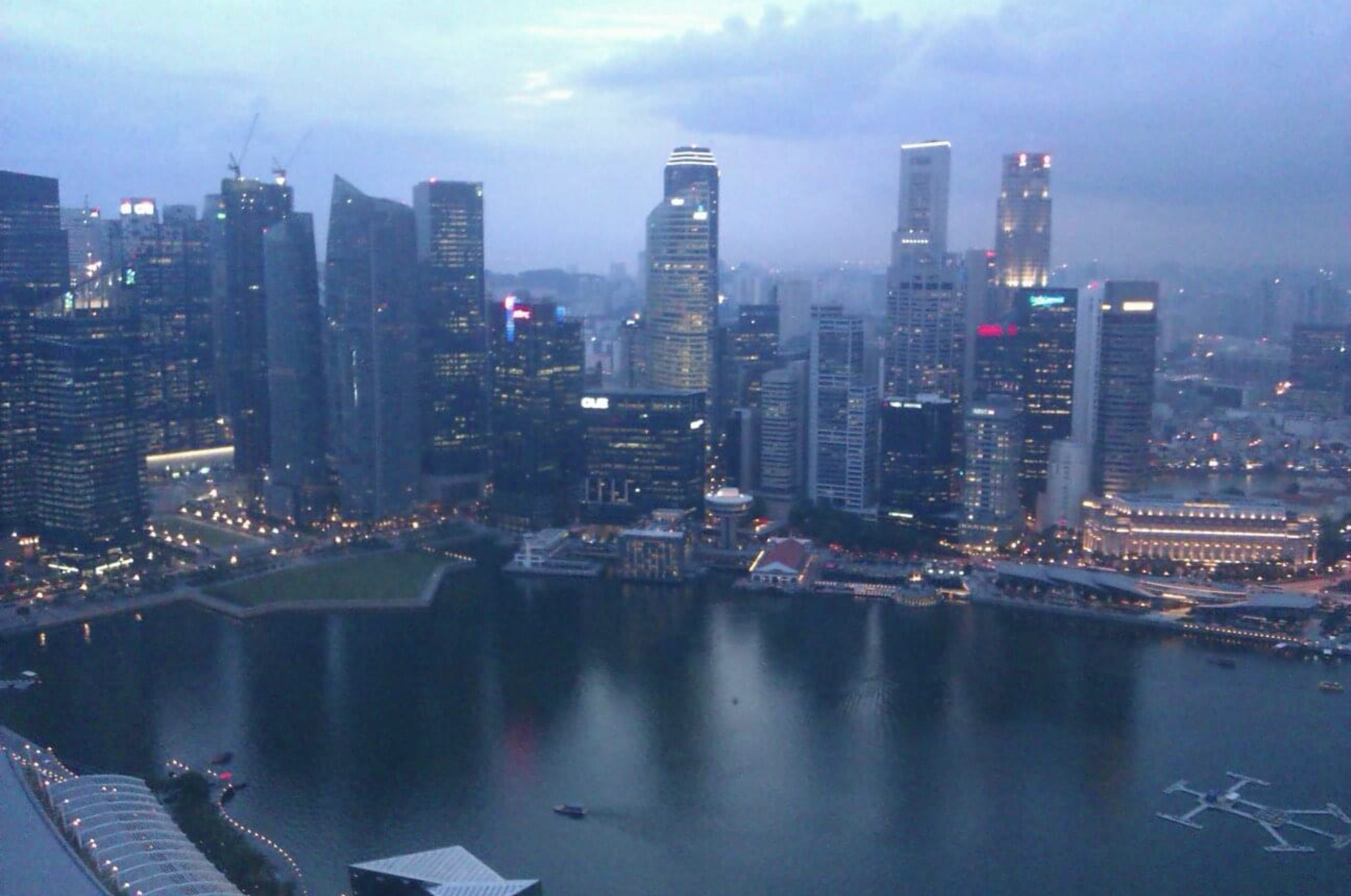 At night the city becomes alive, it might be due to the heat or the jetlag that many of its visitors suffer that makes us go out at those late hours. Every day at seven & eight in the evening we enjoy a spectacle of light & music in the heart of its bay. 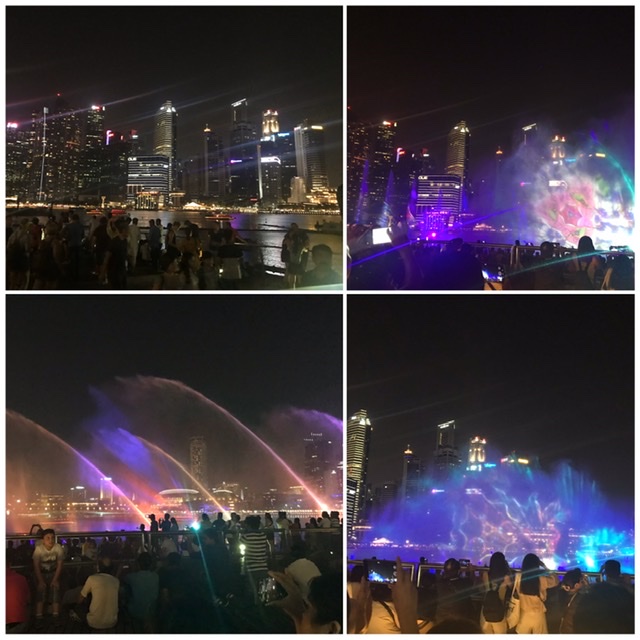 Tonight Vivian & I decide to admire it from the wooden esplanade located in front to the Marina Bay Sands. You can also choose watching it from its dome, I recommend you to do it at least once if you are visiting or are here on business. 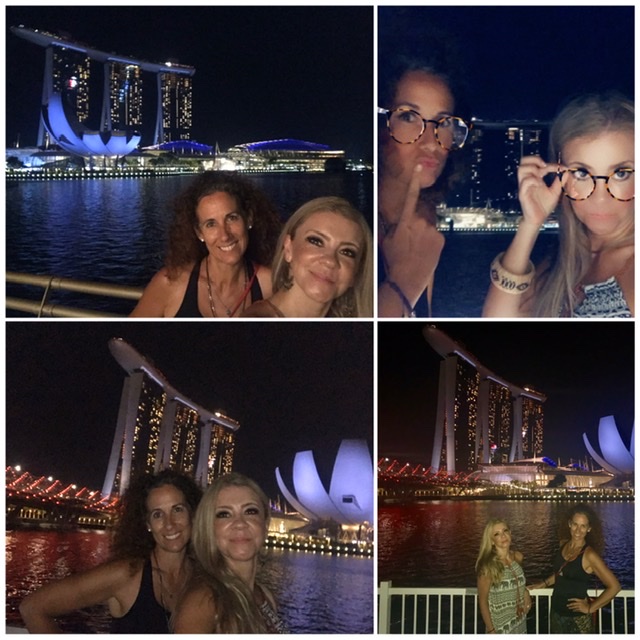 Something you can’t miss out either is the Gardens by the Bay next door, a stunning combination of art in the shape of trees mixed with the beauty of the exotic plants. Vivian says, go at four, enjoy the place, the trees lighten up & stay there for the show. 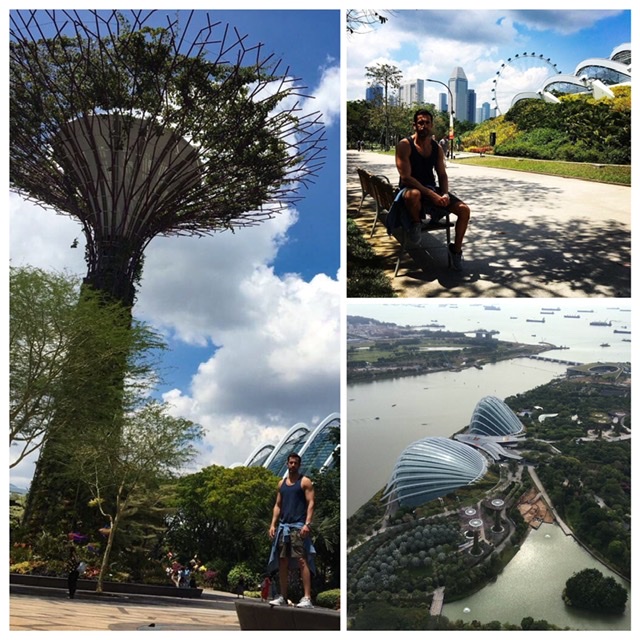 On the opposite side of the Marina Bay Sands there’s an outdoor food court called The Esplanade, there’s plenty of nice food from different places, ideal to enjoy after the show. We love the food & the fact that is served with no single use plastic, well done! 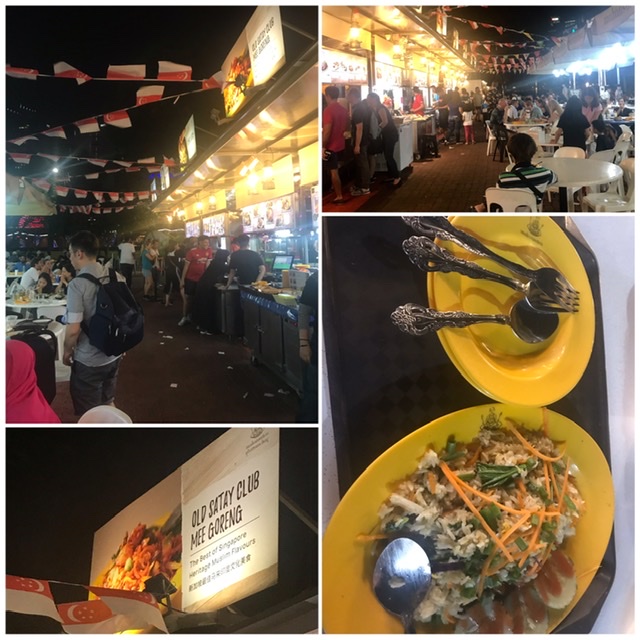 In a very prominent place of the marina, very close to the financial center lives the Merlion, the lion head with the body of a fish that has become the symbol of Singapore, they might decide to add us to the marina too if we stay a little longer. 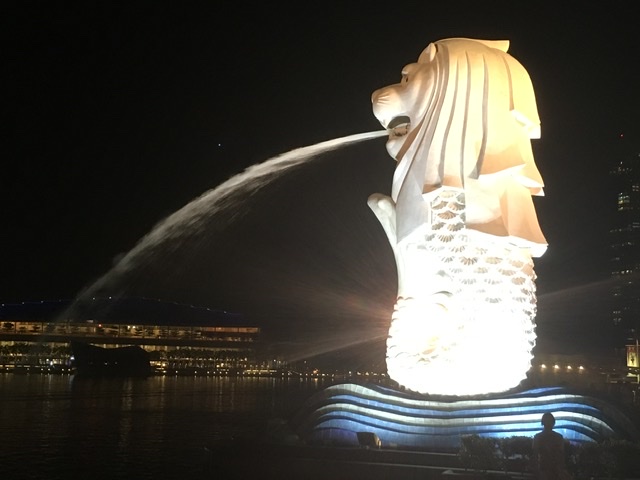 In the morning we venture out looking for a very colorful colonial street. To get there we cross the grand metropoli (or maybe small, but from its center it feels big).

Arriving at Emerald Hill we find the first contrasts of this beautiful place. It’s very close to Orchad Road, which is one of the main streets of the city. 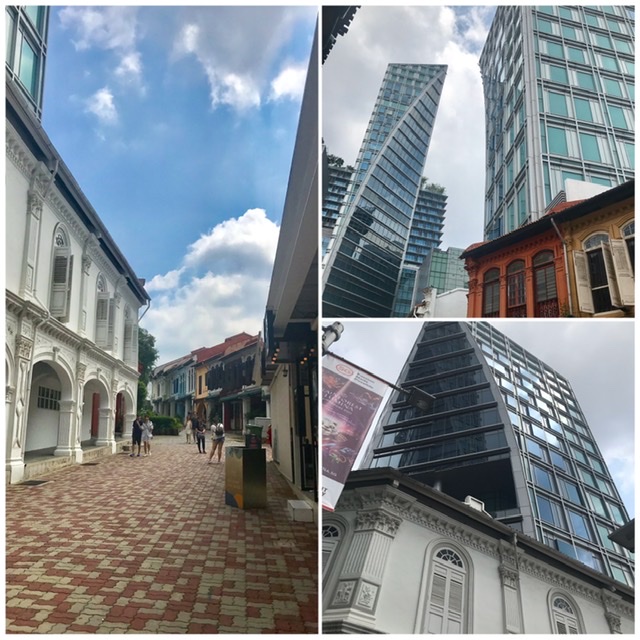 The colourful houses from the colonial era present themselves in front of us as if they were part of a fairy tale. 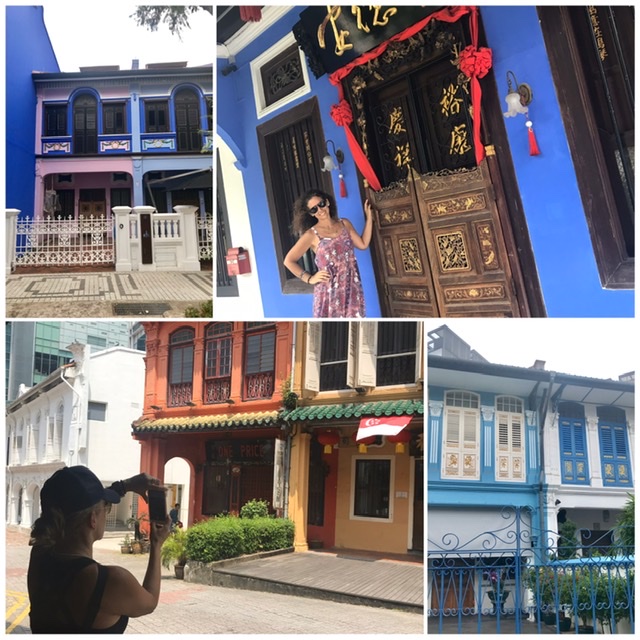 From there we walk to Little India, with the threat of melting as it is August. Remember to always carry water with you in hot countries, we tend to walk a lot, sweat more & we must maintain an optimum level of minerals in our system to keep nomading.

There we encounter some of its faboulous & colourful temples like Sri Krishnan. 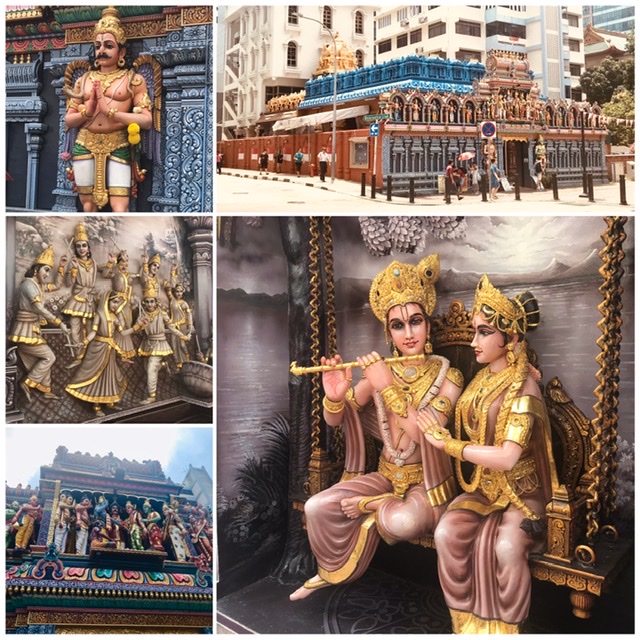 Next to it there is a Chinese Temple of the Good Luck, the Kwan Im Thong Hood Cho Temple, very crowded & with a mini market in front of it full of incense & flowers for the offerings. 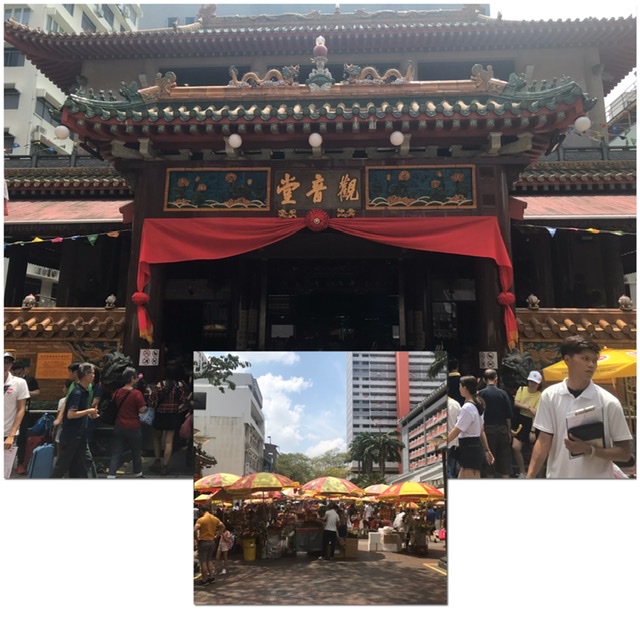 This chubby Buddha offers prosperity if you touch his belly with your right hand, so there I go! 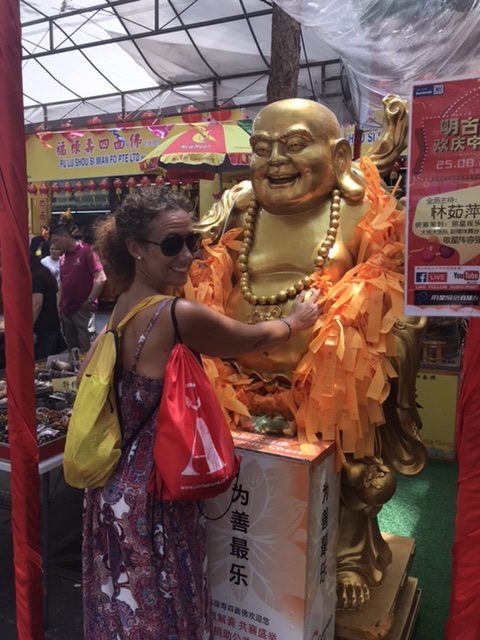 Arriving to Bussorah Street, a very lively & busy street with many restaurants, there’s the Masjid Sultan Mosque, the center of the Muslim community in Singapore. 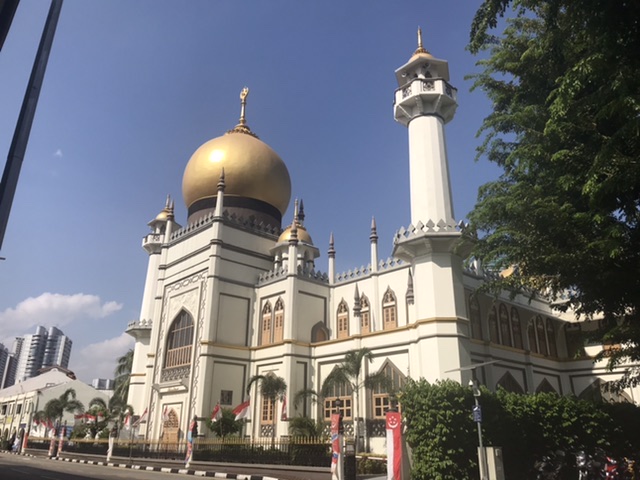 We feel transported to the exotic India, with its lovely people, scents of incense (that has a different aroma to the Chinese one) & flower necklaces; it all makes me feel that we have changed countries in only a few steps, what a contrast! 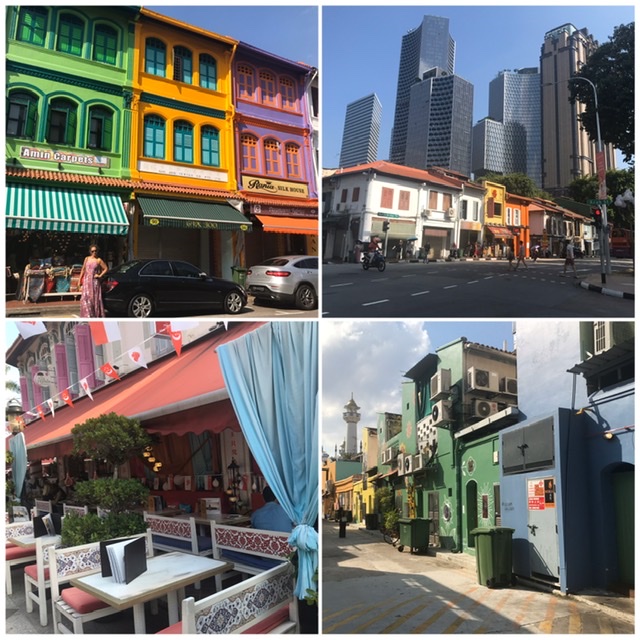 Some meters away we see Sri Veeramakaliamman Temple (yes, I dare you to pronounce it), it’s closed, but seeing the pyramid of figures in its exterior is enough to enchant us. 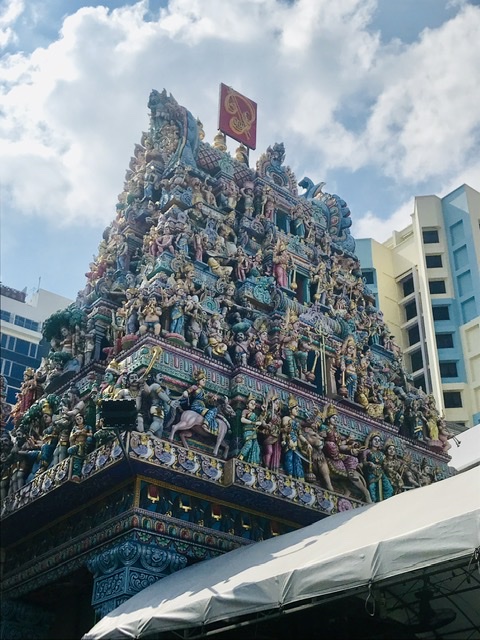 We are hungry so we head to a veggie Hindu restaurant, divine combination has Gokul Restaurant.

The street art in Arab Street & the one that follows our path transmits color, joy & dance. 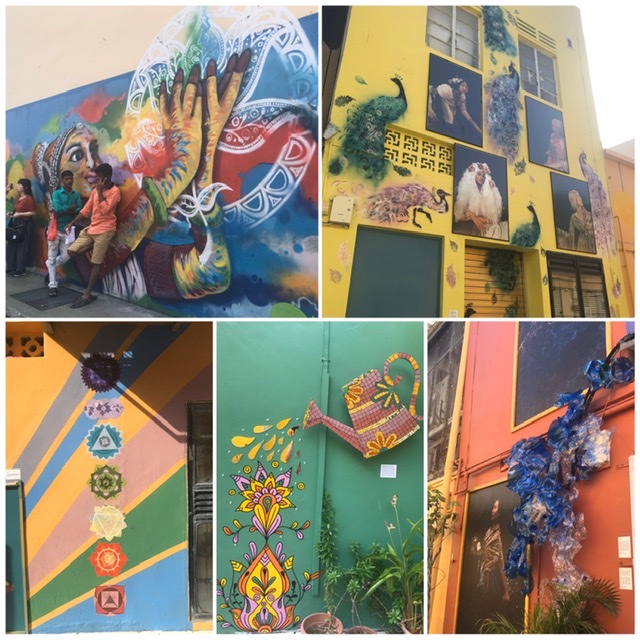 This morning my aubarcas take me to the Botanical Gardens. A beautiful & green oasis that invites me to go all over, under the risk of fainting, it’s again a very hot day. 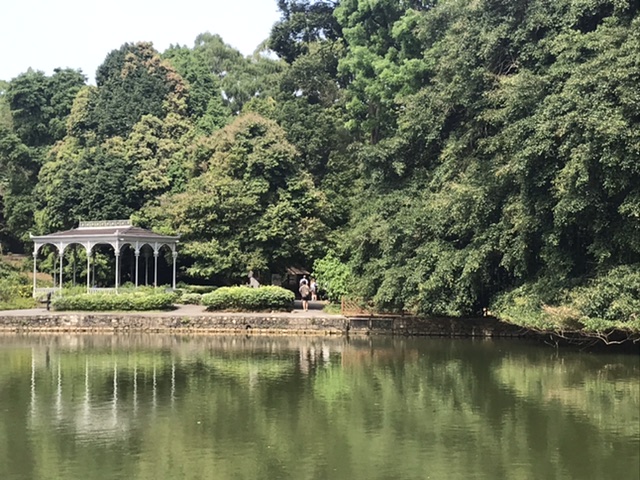 Its grand lake hosts swans, real as well as in the shape of a beautiful statue; massive fish are also inhabitants of this lake, so big they make my mouth drop. 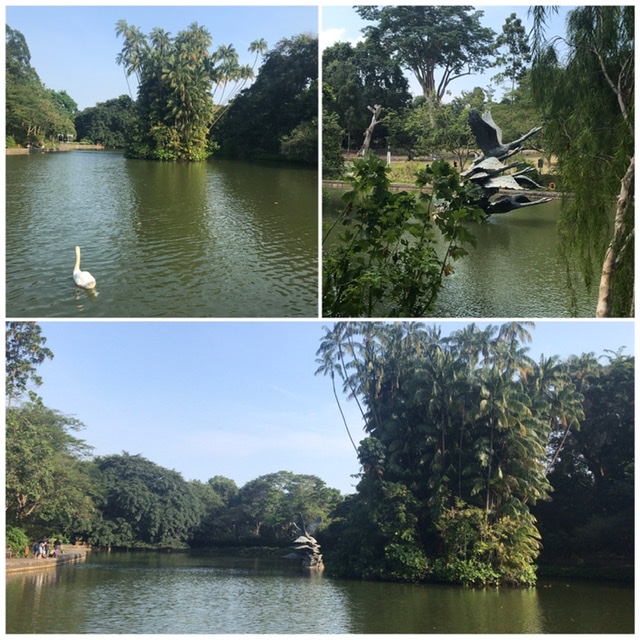 The garden offers an area with many activities for the kids, a garden with healing plants & drawings from the old inhabitants of the place amongst other surprises. 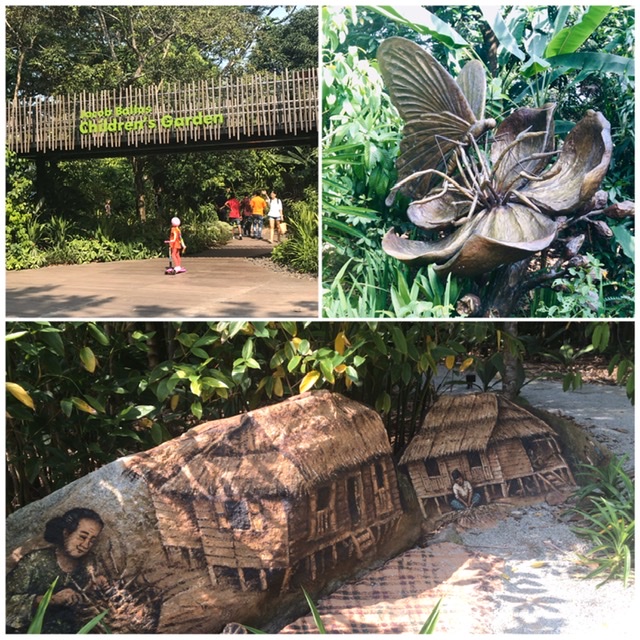 One of the highlights of the place is its Orchid Garden, more colour & beauty. Colour is the word I’d use to describe this post.

Rather different was the book I read in my youth that came to my mind today, “A confederacy of dunes” by John Kennedy Toole, a tale about human miseries & the predominant selfishness in today’s society, told in an ironic tone in some fragments by its protagonist Ignatius J Reilly, with touches of epistles which he exchanges with his friend.

Ignatius a chubby being, quite unique & bizarre who opposes capitalism, who’d eat the hot dogs he had to sell or disorganize the files he had to file, jobs that form the storyline of this picaresque novel which won a Pulitzer in 1981.