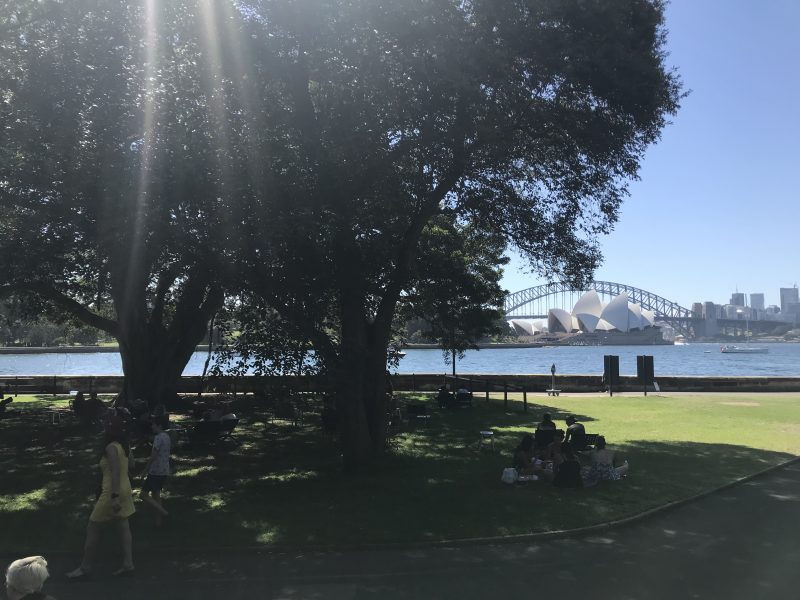 Every day at 10:30, next to the Town Hall, we can find a group of young people who offer Free Tours that last for three hours and finish in the The Rocks area. I totally recommend them as the guides are very nice & knowledgeable, they tell you many interesting things about the city. 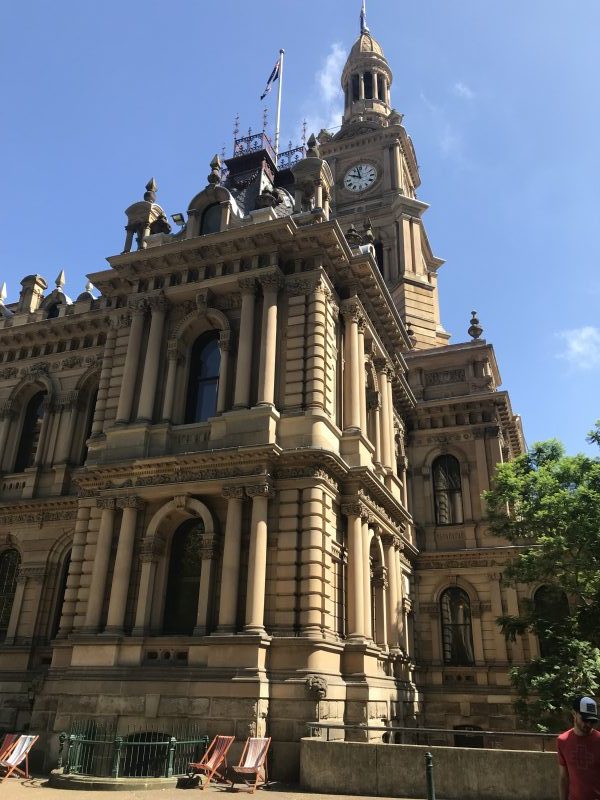 They tours take place in the CBD, which is how they call the Central Business District, you’ll see how the Aussies tend to shorten names a lot. The tour starts showing us the emblematic Queen Victoria Building o QVB, designed to be a market place built in the shape of a cathedral, it is now a beautiful shopping mall.

We continue in Hyde Park, where it’s the Saint Mary’s Cathedral, which is stunning. Next door there is the oldest hospital of the country, The Mint which was financed, in 1816, by thousands of gallons of rum that is why they call it “The Rum Hospital”, I wonder which the most treated illness was. 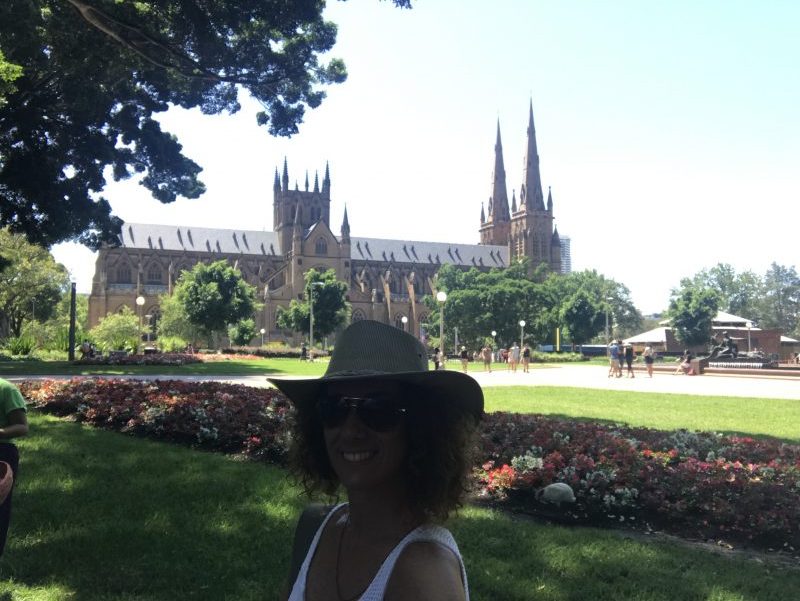 Next to The Mint there are The Barracks, where they used to place the convicts which later on was used to look after women & children, loads of history to be found there. 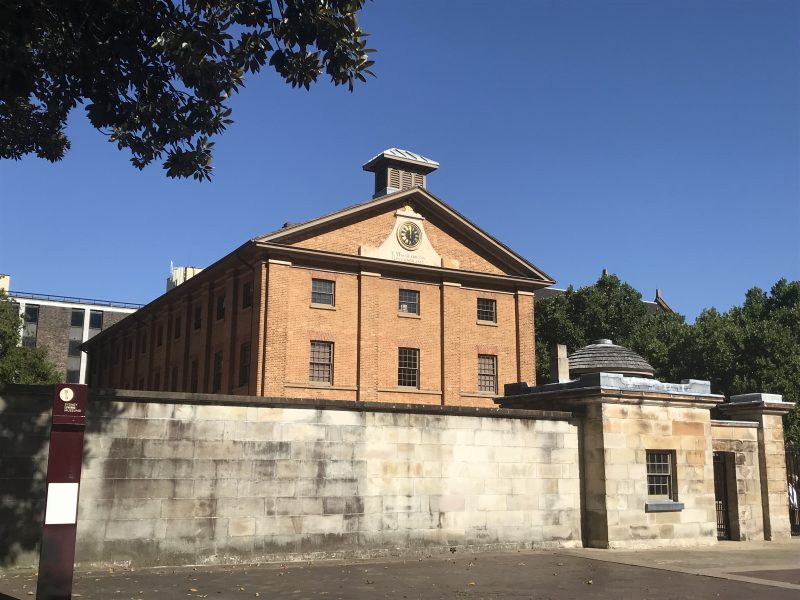 On the other side of the park there is the ANZAC Memorial, dedicated to the army corps of Australia & New Zealand. The building you’ll not miss & be able to see from far is the Sydney Tower, the tallest structure in the city & the second tallest tower in the Southern Hemisphere, after the one in Auckland. 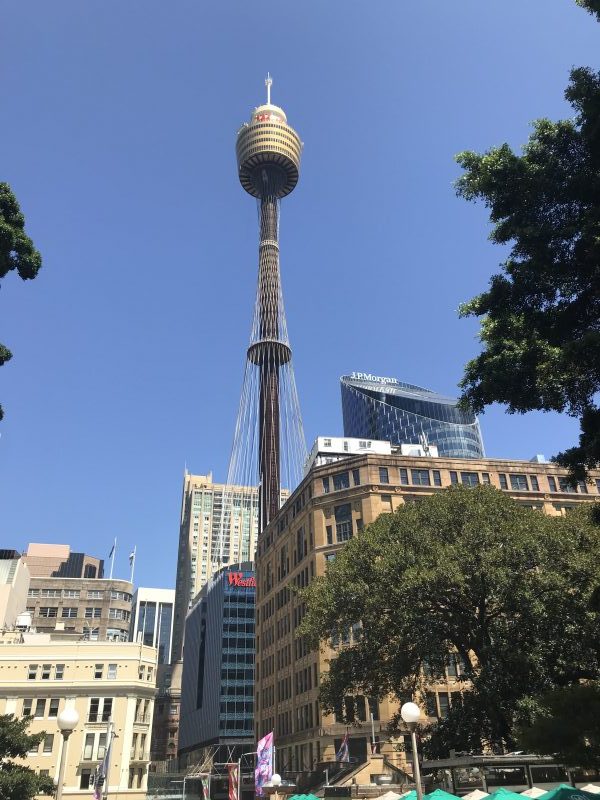 We kept walking till arrive to the heart of the city, Martin Place, where the main banks are & a particular fountain that I am sure it looks familiar to you if you’ve seen the movie “Matrix”. 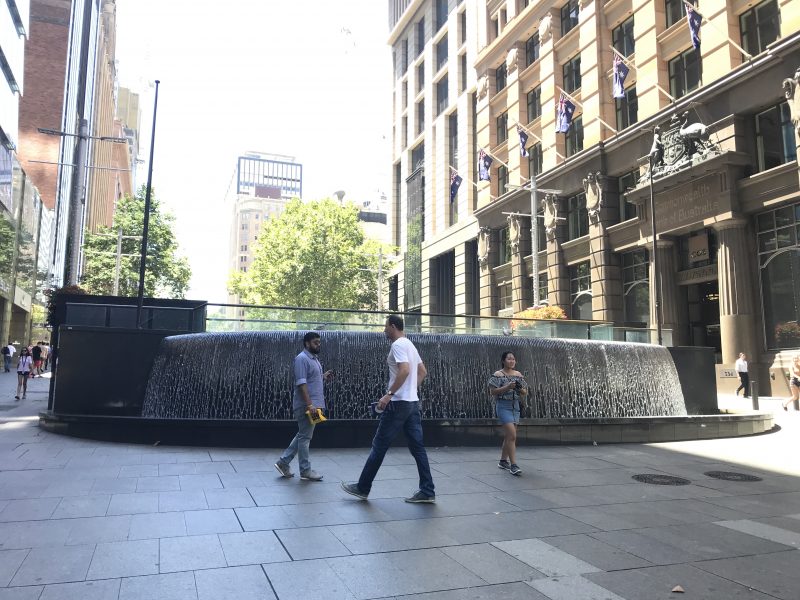 The council is rehabilitating little dark alleyways, there’s one between Pitt Street & George Street that I love called Angel Place, it has hanging birdcages that play the sound of the native birds which used to live in the city before the skyscrapers appeared, they’ve tiled the floor with the names of each of them. The song changes depending on whether it’s day or night.

The tour guide took us to Circular Quay where the main ferry terminal is. In the customer service desk is where, in my first day in the city, I got an OPAL card to use on all the public transport in Sydney, I also downloaded the app to top it up. There is something that works in a different way than the one I’m used to, you tap on the card when you access the transport and tap off then you leave it, so remember to tap off if you don’t want to get into trouble.

In Circular Quay we briefly visited the Custom House, in the floor there was a mockup of the city, we could see from “above” the path we had taken that morning around the streets of this beautiful place. 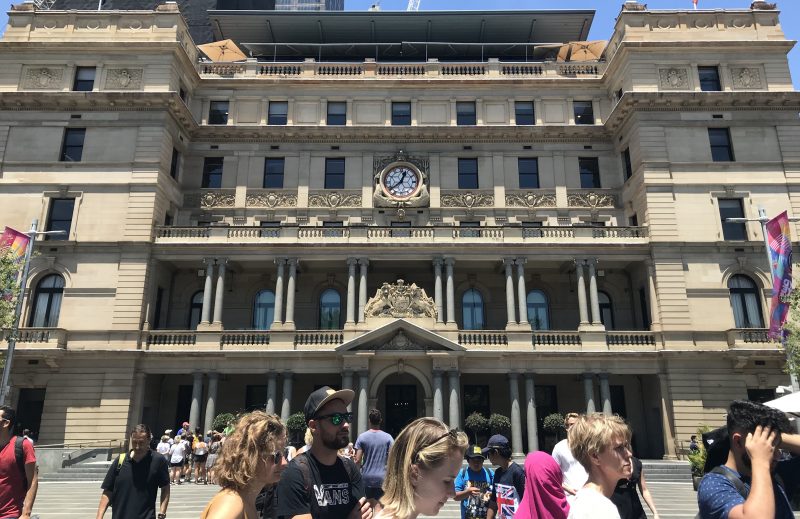 When we finished the tour thanking our guide with a worthy tip & as it was Friday I decided to grab a bite in the Foodie Market in The Rocks, the one I told you about. From there, I went to the Botanical Gardens. There is an entrance just before arriving to the Opera House. 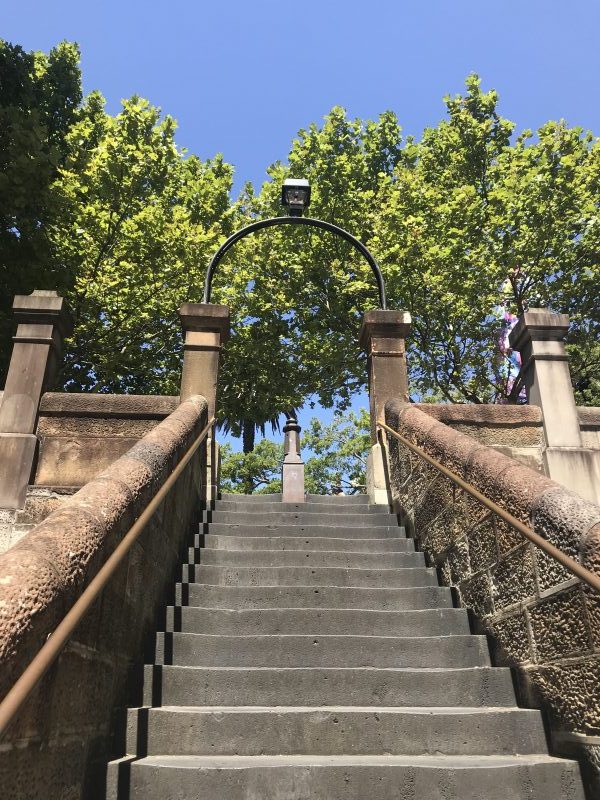 I was able to admire the local flora & walk around the bay. I enjoyed going along the sea till arriving to Mrs. Macquaries Chair which is another lookout from where you can see the bay and its landmarks from another angle. I bet on New Year’s Eve was packed as the views must’ve been incredible. 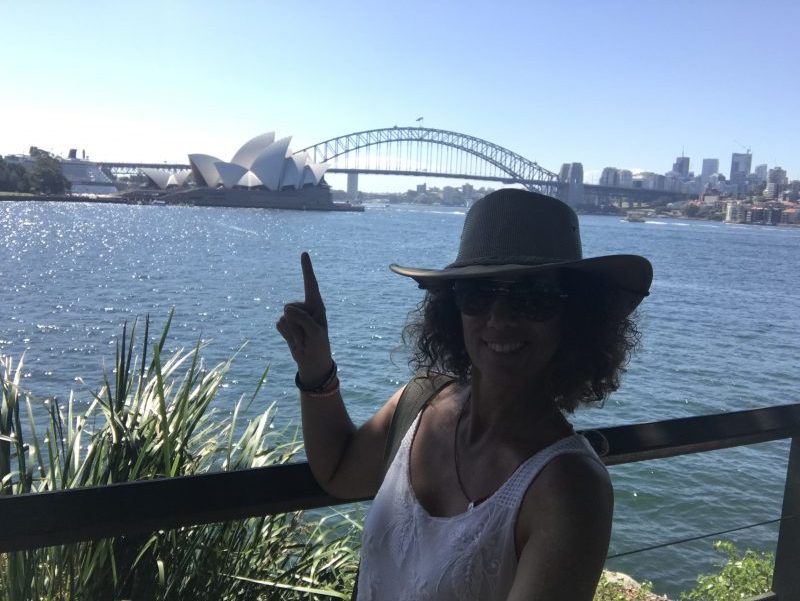 I crossed the Botanical Gardens & passed near the Herbarium, which made me think of how much my mom & friend Toni would love this place with so many plants in it. On my way out I witness a wedding, I wasn’t surprised as the truth is that the place is very beautiful & ideal to celebrate one. 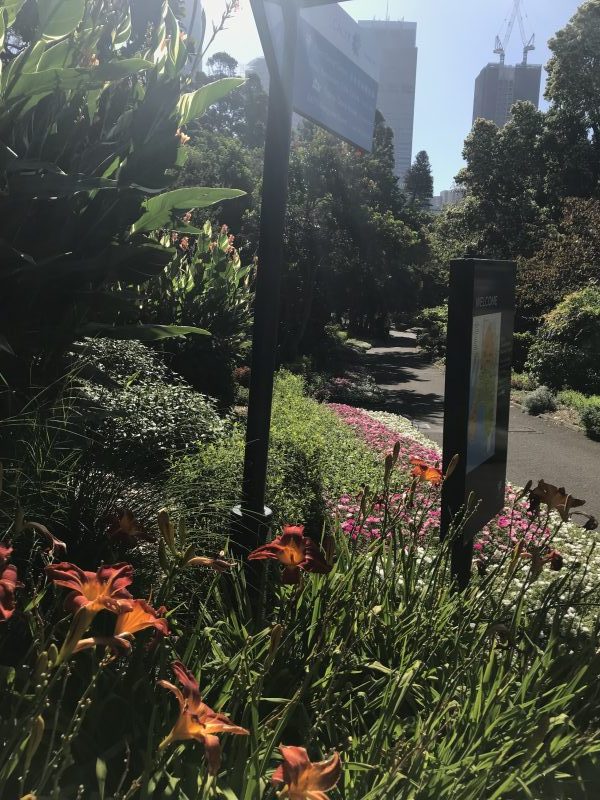 Exiting the gardens I found the State Library of New South Wales, I was very happy, as you know, I love them. I went in to visit it but it was already five the closing time, so with my joy in a pit I continued walking. 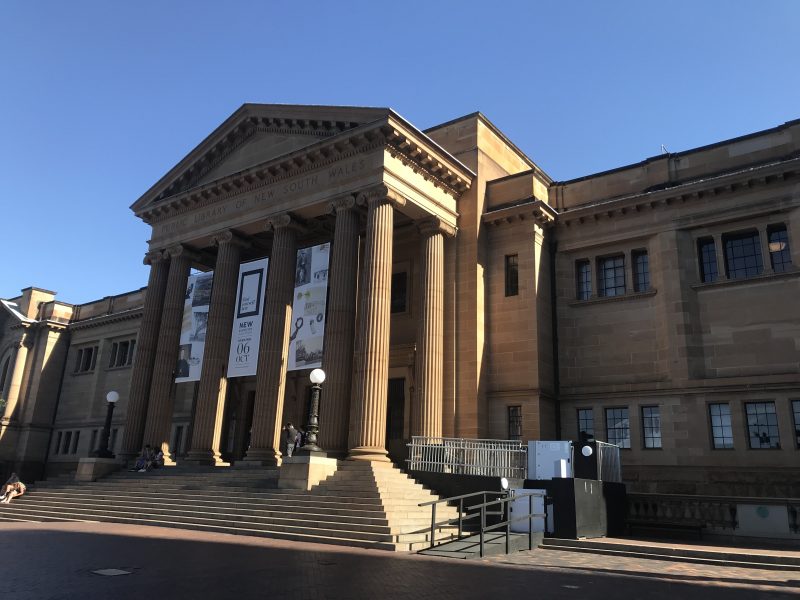 I wanted to see the inside of Saint Mary’s Cathedral & as Hyde Park wasn’t far & it was still open to the public, there I headed. I went in to admire it & to light a candle for my dad. 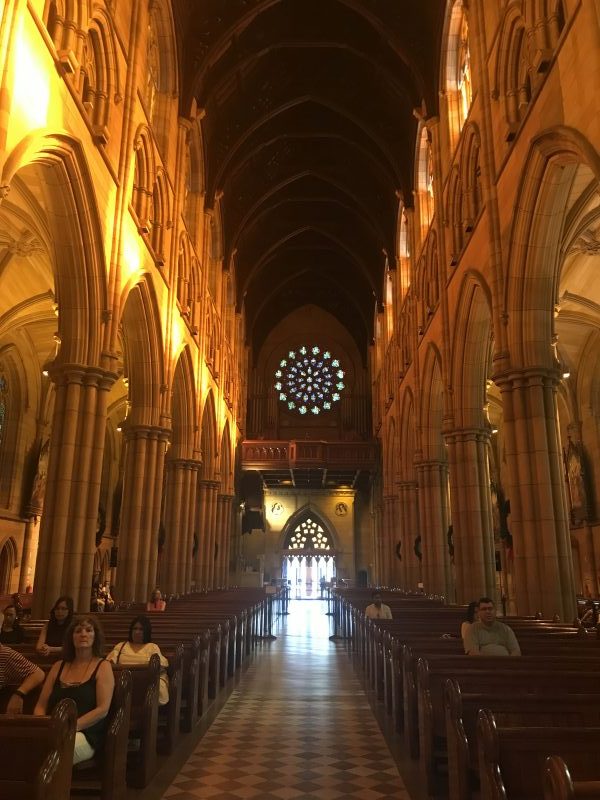 As I felt tired of walking all day, I took the train in Town Hall station & I was home in no time. There I cooked some veggies for dinner whilst chatting to the lovely Helene about our favourite subject, books. I recommended her one that I read many years ago called “The Fifth Sacred Thing” by Starhawk.

A fiction novel set in 2048 San Francisco. The US has been destroyed & fractured. A utopian society led by women heal the Earth, plant trees & plants to share with all its inhabitants. In the South water is scarce & they fight for food, threatening the life of this ecotopian city. Told from the point of view of a 98 year-old Maya & her grandchildren Bird & Madrone. An exemple of ecofeminism & ecotopian fiction. 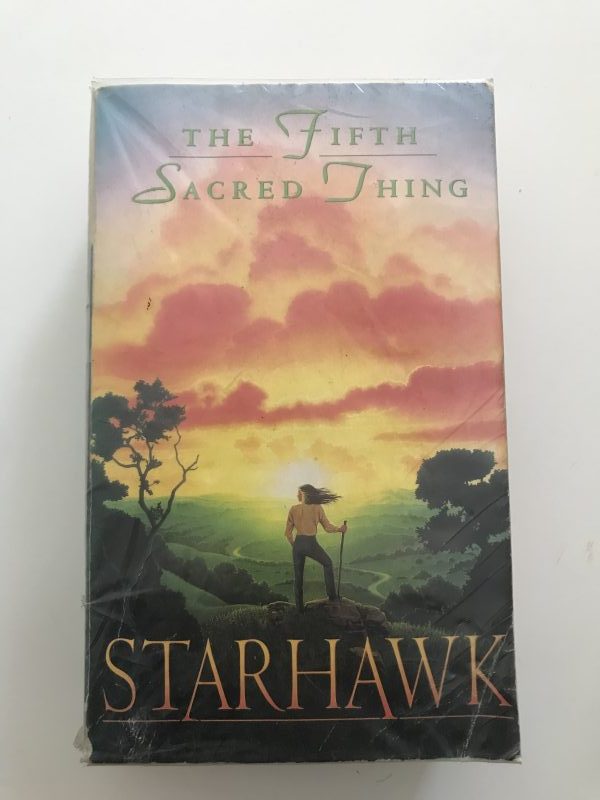