Brisbane is in the Moreton Bay protected by an island of the same name but if you drive north, you’ll find the wild beaches of the Sunshine Coast.

There we headed to with our vizslas, to walk & play on Peregian beach, virgin, wild, & with big waves, definitely stunning. We saw giant jellyfish, although the ones we really had to watch out for were the small ones with blue tentacles. 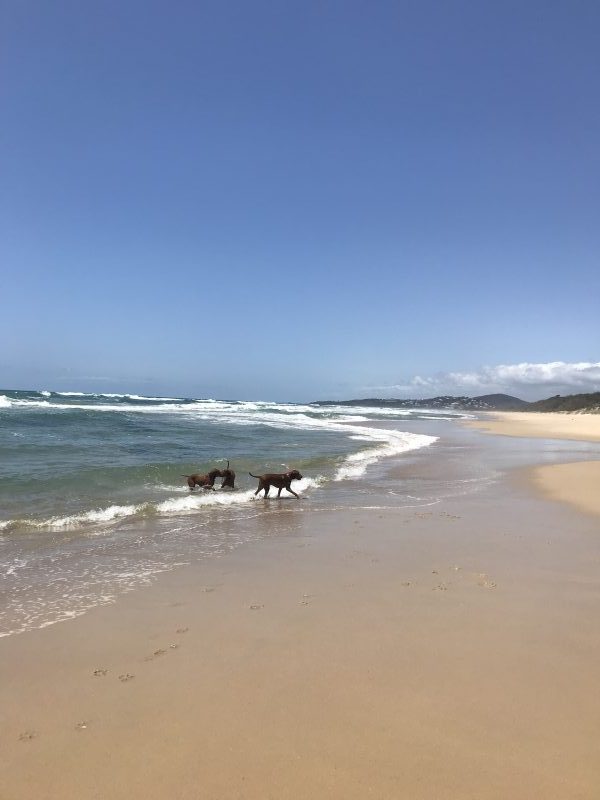 We drove a bit further north to Noosa Beach, a protected beach into a small bay where many Australians spend their holidays. Its waters are calmer therefore it is an ideal spot for families with children. 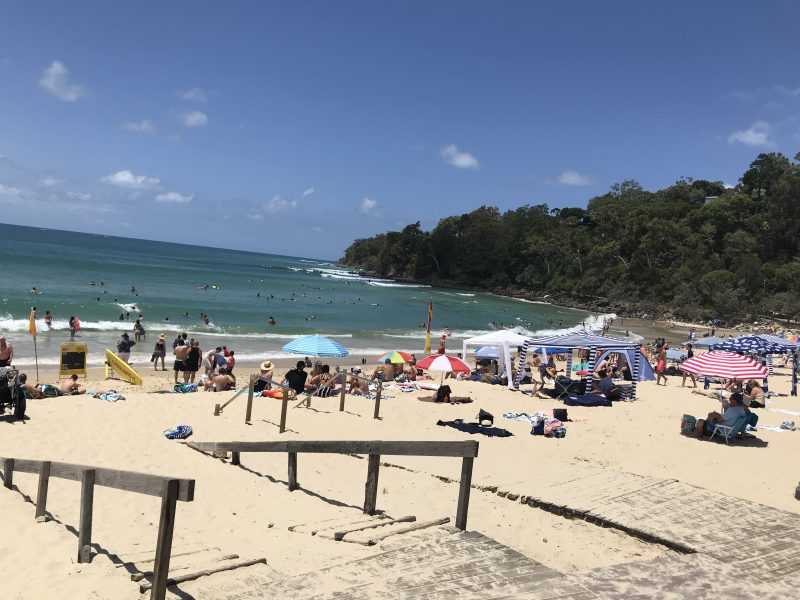 After having a smoothie in Noosa Village we went to Pelican Park beach to eat a very big yummy muffin. 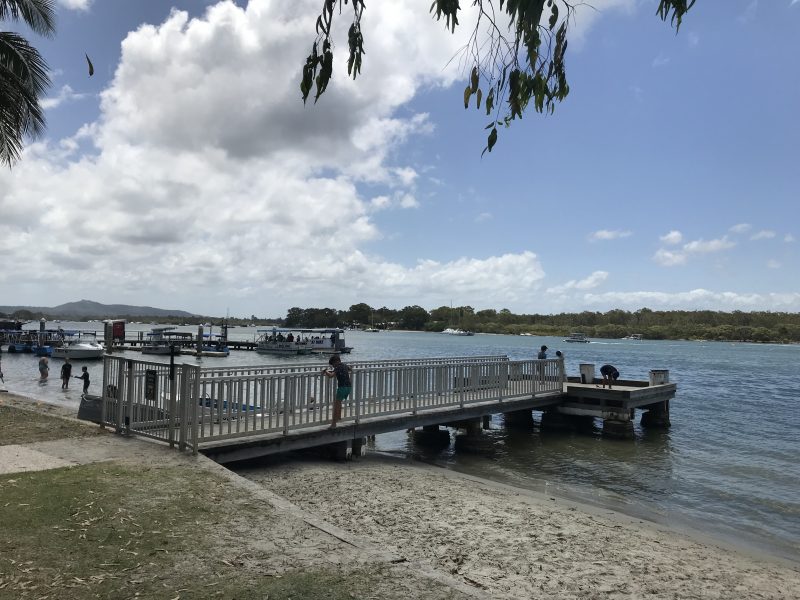 After driving along the Sunshine Coast we headed more inland. We passed Palmwoods & on the side of the road saw a market, similar to the honesty box I was talking about on my post “Road trip into the Aussie bush”. 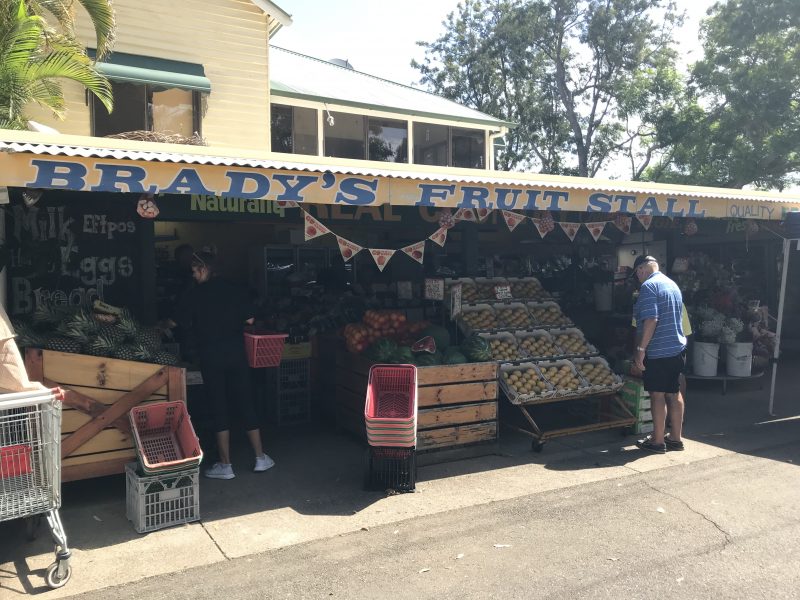 We stopped to get some juicy fruit & followed the road getting deeper into the bush.

On the way to Montville, we had stopped to admire this sublime beauty that opened itself towards the sea, my love for this country was growing by the minute. 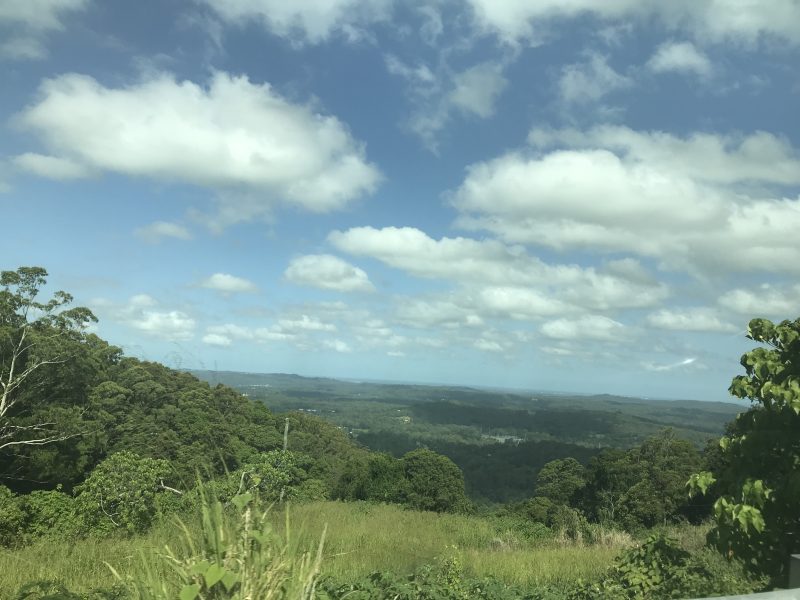 Montville is a gorgeous & picturesque hippie village that appeared in front of us from the lush  & green vegetation. Its Queenslander & fairy tale type of houses made us feel like Dorothy (Judy Garland) in “The Wizard of Oz”. 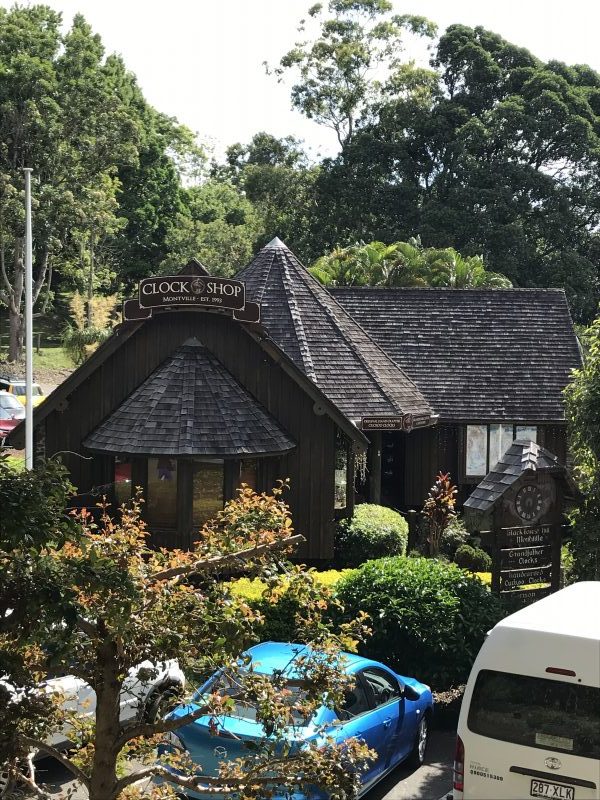 A few miles south there is another charming village as nice as Montville called Maleny; the truth is that they are both so magical. There I went in a second hand shop where I came across one of the May Gibbs books, I’m sure you’ll remember it from the picture of the post, I found my little a treasure in a magical place!

We had a walk with our four legged children, a coffee & just simply enjoyed the energy of the place before heading back home passing by Bald Knob to admire another stunning view. 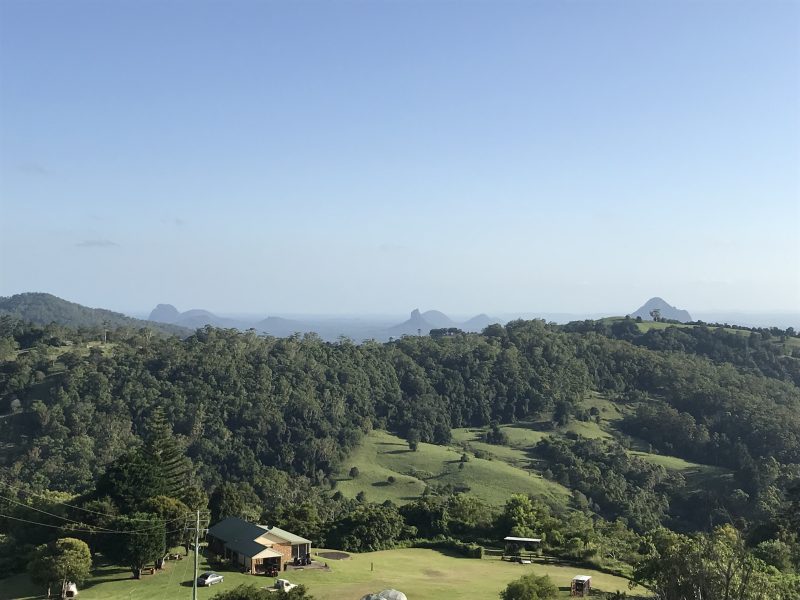 The following day I decided to take the train to Indooroopilly Station, I know, I am still learning how to say. Exiting the station I walked up to the shopping center next to the bus station (you have to turn right at the mall to see it), from platform A I took bus 430 to Lone Pine Koala Sanctuary. Yes, I bet you already know what I went to see there. The native honey pie I would’ve taken home with me & didn’t want to stop squeezing. 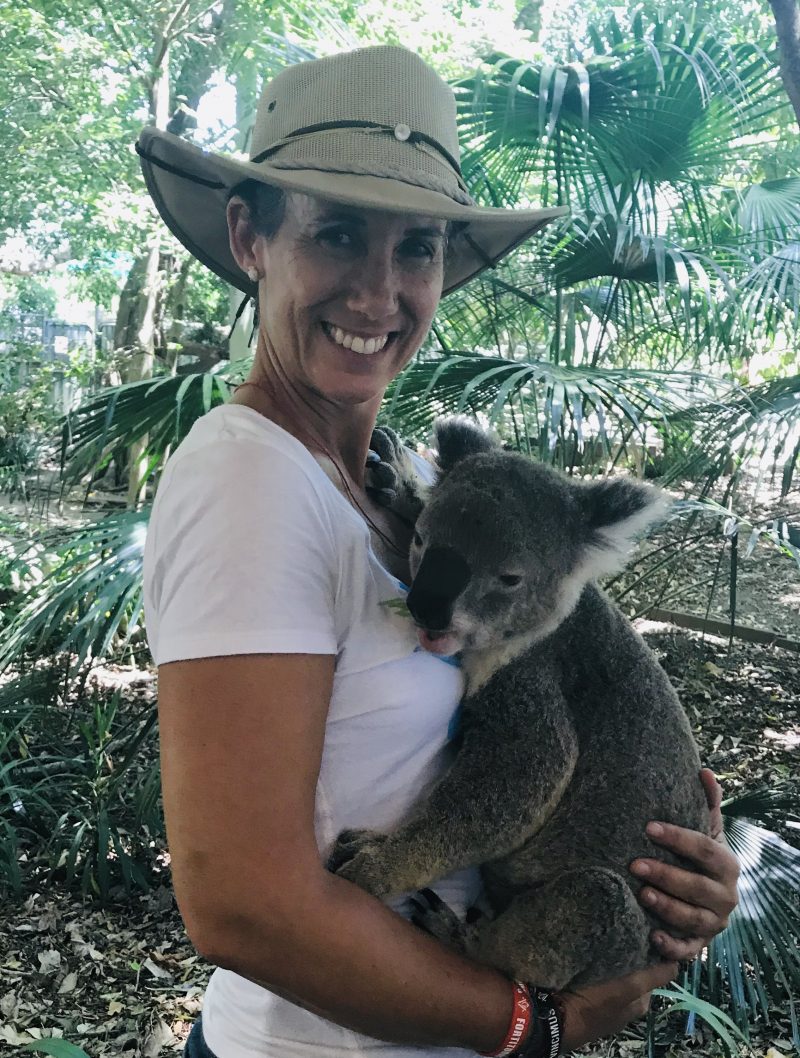 Since I arrived in the country I was dying to see & touch the koala, not only them, but the kangaroo too. Have you heard the legend about this name? When the European settlers arrived & asked the aborigines what the name of this animal was, they replied, Kan Ghu Ru, “I don’t know understand your question”. So here it is Skippy, not very interested in the treats I was giving him, & totally squashable. 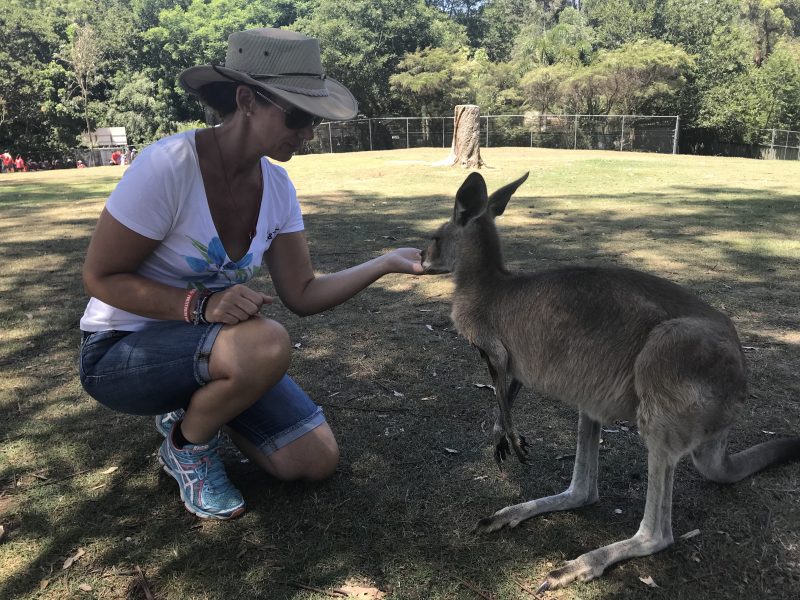 I was already as local as them, I couldn’t leave without meeting them, don’t you think?

Even though the sanctuary is the biggest koala reserve in the world I could also admire the Tasman Devil, the dingo, wich laying as he was in the sun didn’t really look like the biggest terrestrial carnivore predator of the country, some snakes of the heaps that live here, birds, the duck-billeds & some other local species. 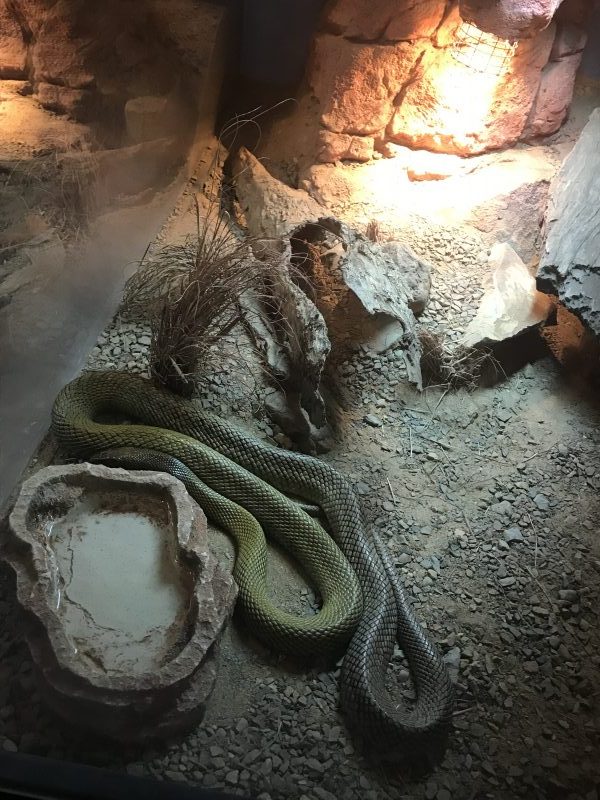 In the days I was writing this post another sanctuary burnt down, a beautiful cathedral, Notre Dame. It reminded me of a book that I read not long ago by Julia Navarro called “The blood of the innocents” which starts telling the story of the last Cather’s & how they were completely annihilated by the Inquisition, leaving behind a treasure, a parchment written by a friar. The narration moves forward in history to the WWII, where the Earl d’Amis inherits the parchment which last words say “someday someone will avenge the blood of the innocents”. The fanaticism of this family arrives to our time from the hand of the son of the earl, & gets mixed with the fanatic ideas of terrorists. The conspiracy is full of false clues, very important characters involved in turbulent matters, sacred spaces from two religions put in danger, a reflection of the conflict between East & West. As always Navarro’s pen makes us enjoy a very addictive book, wonderfully narrated & clearly well researched.