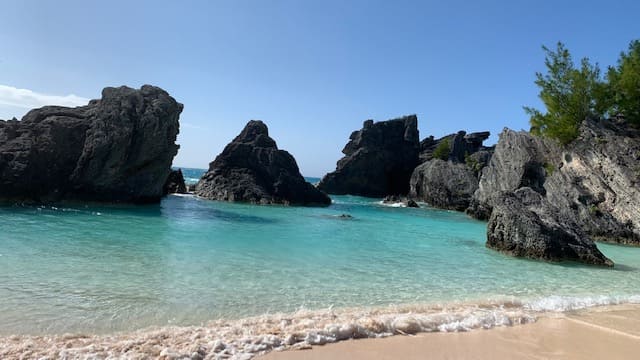 I arrive in Bermuda in February 2022, the first time in more than 20 years since last time, and I must say that not much has changed. It’s one of those places that I could say stays exclusive. Tax haven and place where insurers flourish.

Famous for the intriguing triangle it forms with Puerto Rico and Miami; place where ships and planes mysteriously disappear. Atlantis, Kraken, UFOs? who knows, what we do know is that the island is located in the North Atlantic and therefore in winter its temperatures are milder, maybe the sea is somewhat cold to swim, but the sun warms lovingly.

Hamilton is the capital and at its entrance there used to be an endearing character: Johny Barnes, also known as Mr. Feelgood, for 40 years from 5am to 10am was dedicated to welcoming everyone who arrived, his words were “I love you”, “good morning”, “God bless you”. In 2016 he died and the city immortalized him with a statue, I think it is a very nice way to invest the mornings. As Queen Elizabeth II said, Johny represents the true spirit of Bermuda. 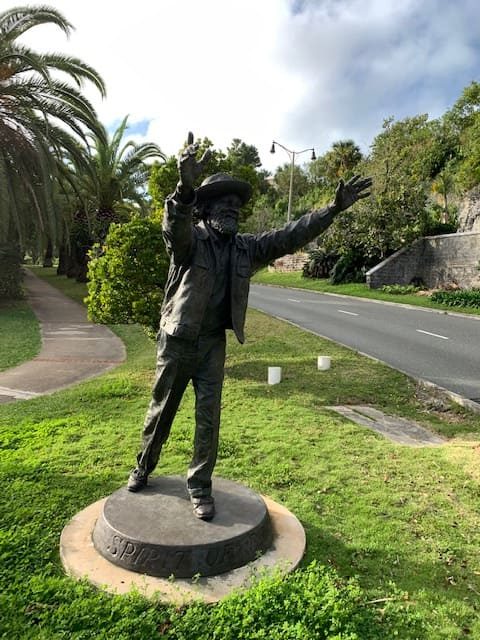 The main Front St. is strewn with colorful houses and businesses, and the maximum speed is 35 km/h. 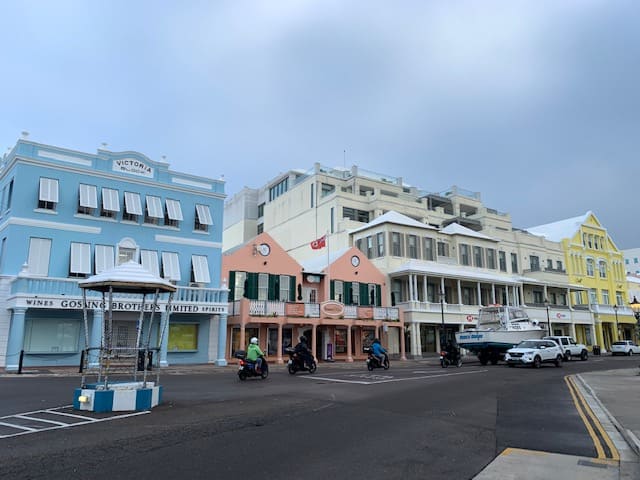 This noteworthy business is clothing and Bermuda store The English Sports Shop. Since 1918 has been dressing the inhabitants of the place. The story of the name of these shorts began during World War II, when the temperature in the tents increased due to the summer heat and the steaming teapots. The soldiers resolved to cut their pants above the knee, and a rear admiral decided to call them “Bermuda shorts” , something that soon became popular. 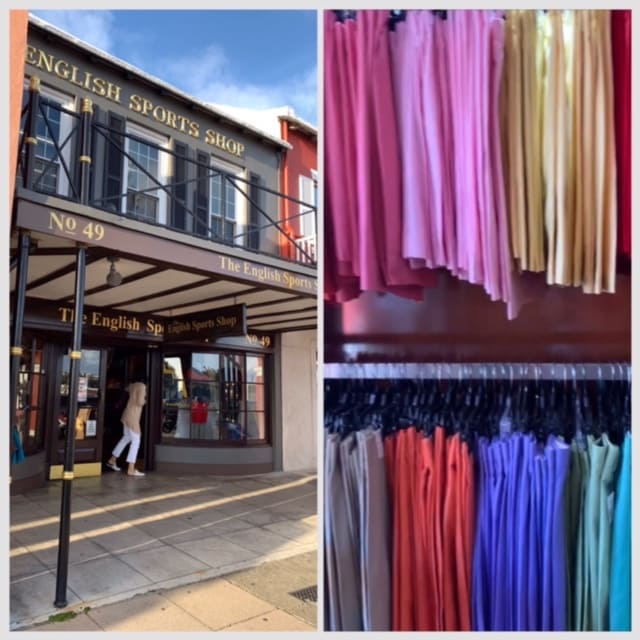 Guess what the official color of Bermuda is, yes, pink, Saint Andrews Church proves it. 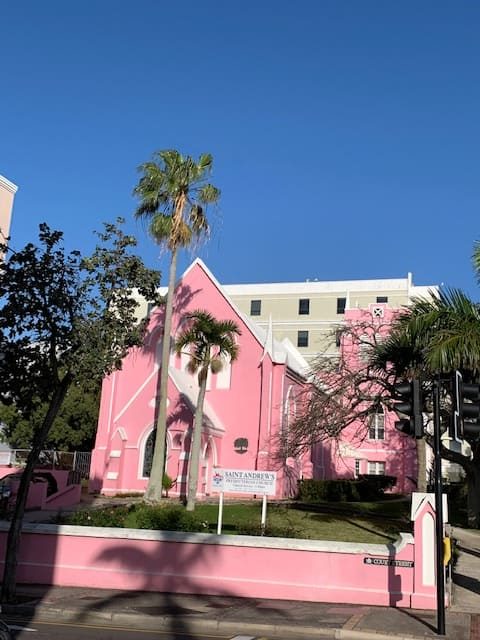 Saint Paul is one of its churches, and of course, this is its beautiful cathedral. Another curios fact is that it is not allowed to build buildings taller than it. 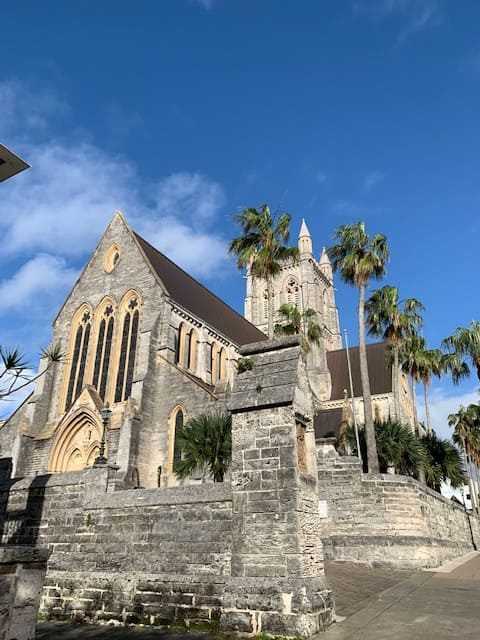 The island was discovered in 1505 by the Spaniard Juan Bermúdez, now you know where its name comes from, in 1612 the first English settlement was founded, the oldest in the New World. This sculpture named “We Arrive” depicts a day when, less than a year after the emancipation of the Bermuda slaves, a ship carrying 78 slaves arrived pushed by a storm, they were offered their freedom on February 18, 1835. 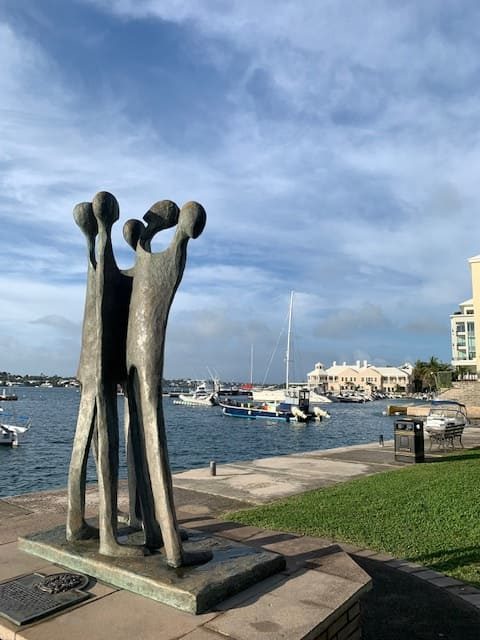 The Bermuda Cabinet Building is like the Bermudian White House. Next to it is the memorial for the fallen in the two world wars. 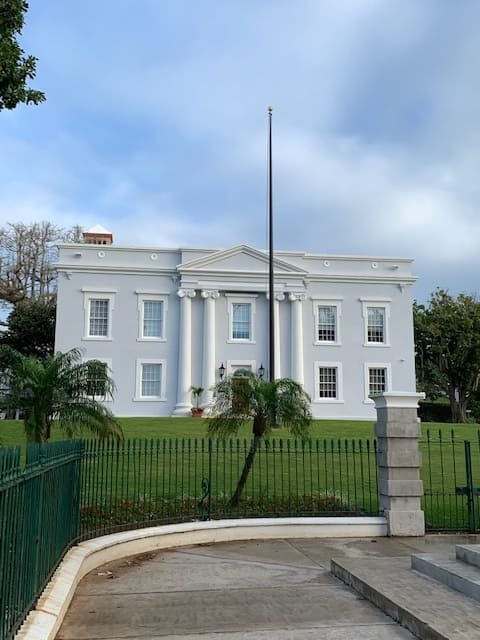 The Immigration Department building sits on a hill in the city, just behind the “Bermudian White House.” 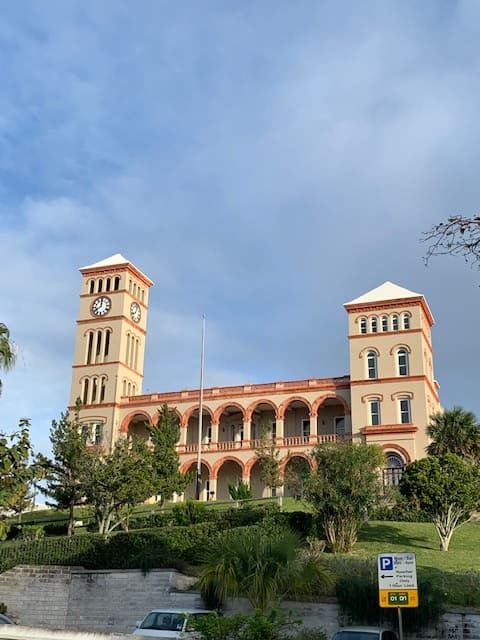 Bermuda Society of Arts has a garden with a lot of art, very cool statues like an armchair of colors, and my favorite, children reading with their teacher, who trains them in this beautiful art. 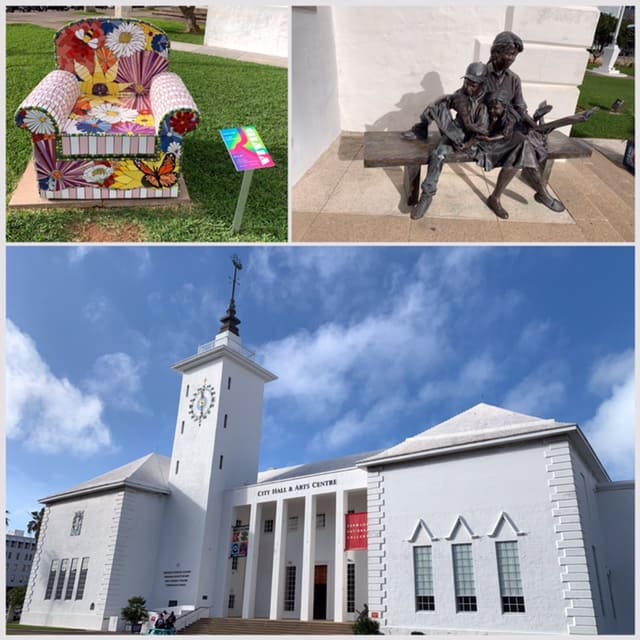 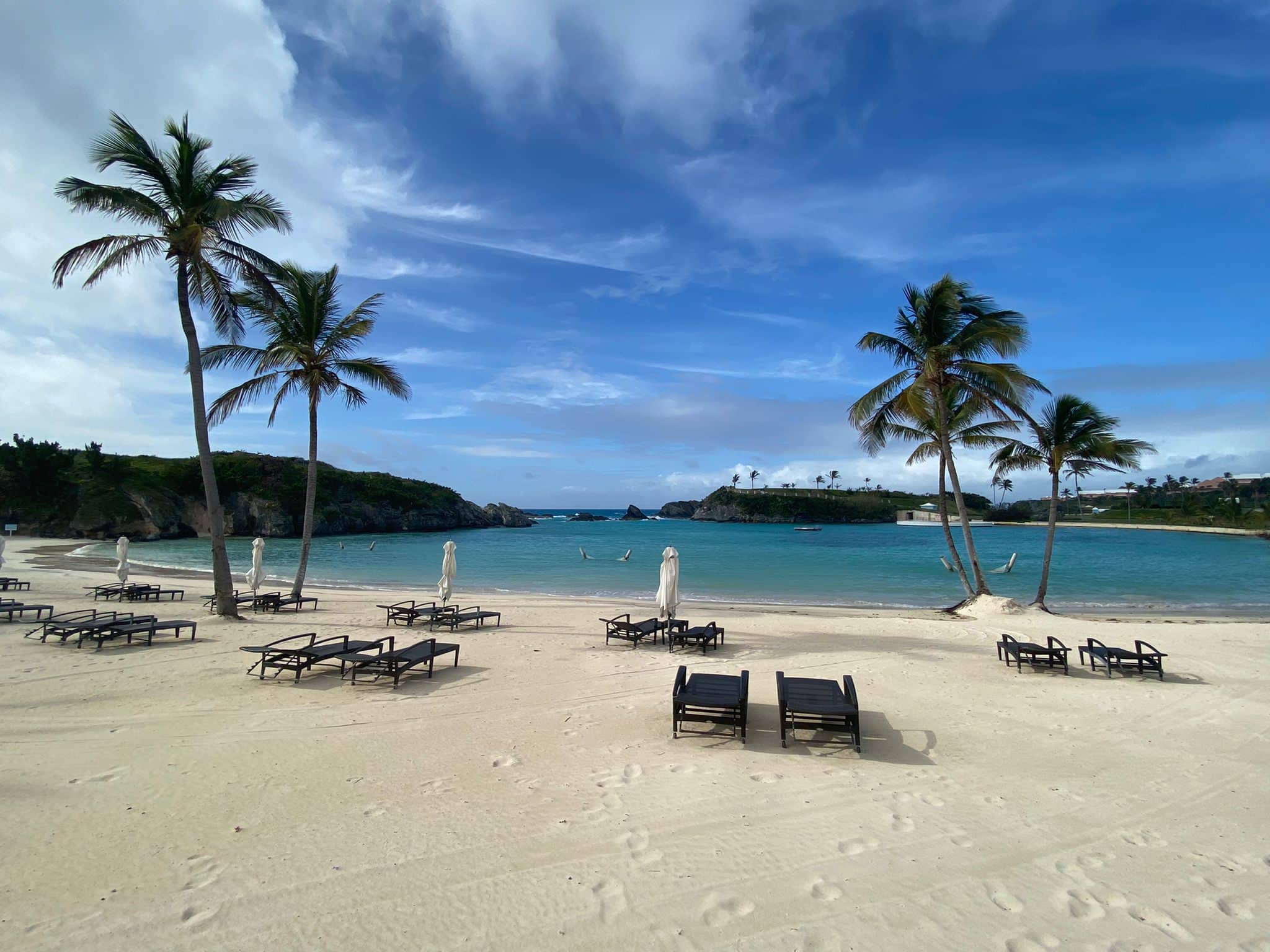 In Freedom Square there was a hotel that from 1861 was a pioneer in tourism, until 1955 that a fire destroyed it. 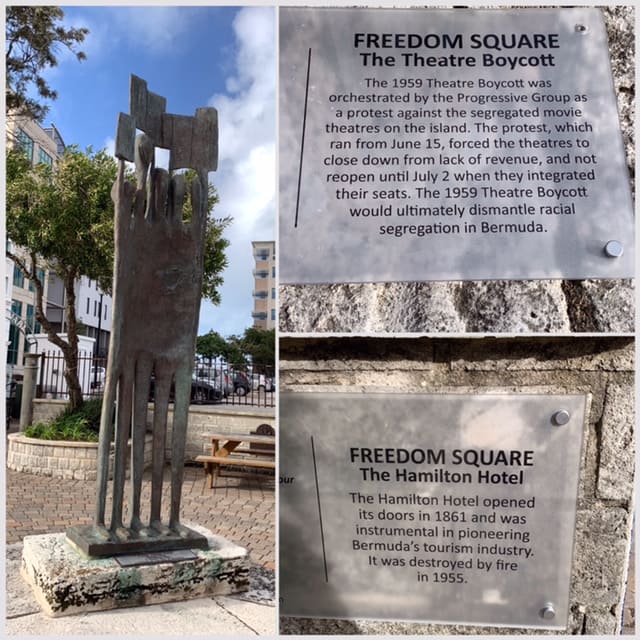 One of the most famous and idyllic beaches in Greater Bermuda is Horseshoe Bay. There we spent a morning enjoying the sun and its wonderful waters. It is so photogenic that we took wonderful shots. 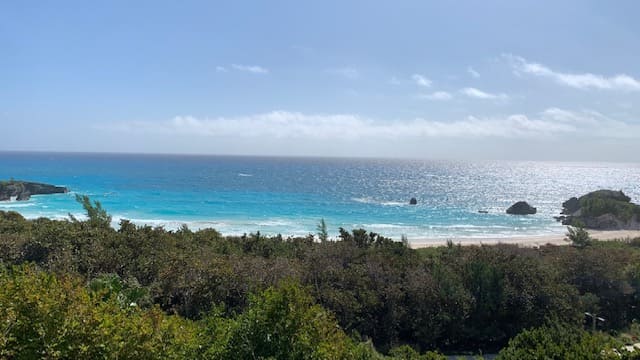 On Gibb Hill is the lighthouse of the same name, around it are the Turtle Hill golf courses, a very popular sport in the place, as well as cricket. Near by Cross Bay Beach looks like Greece, with its white and blue houses. 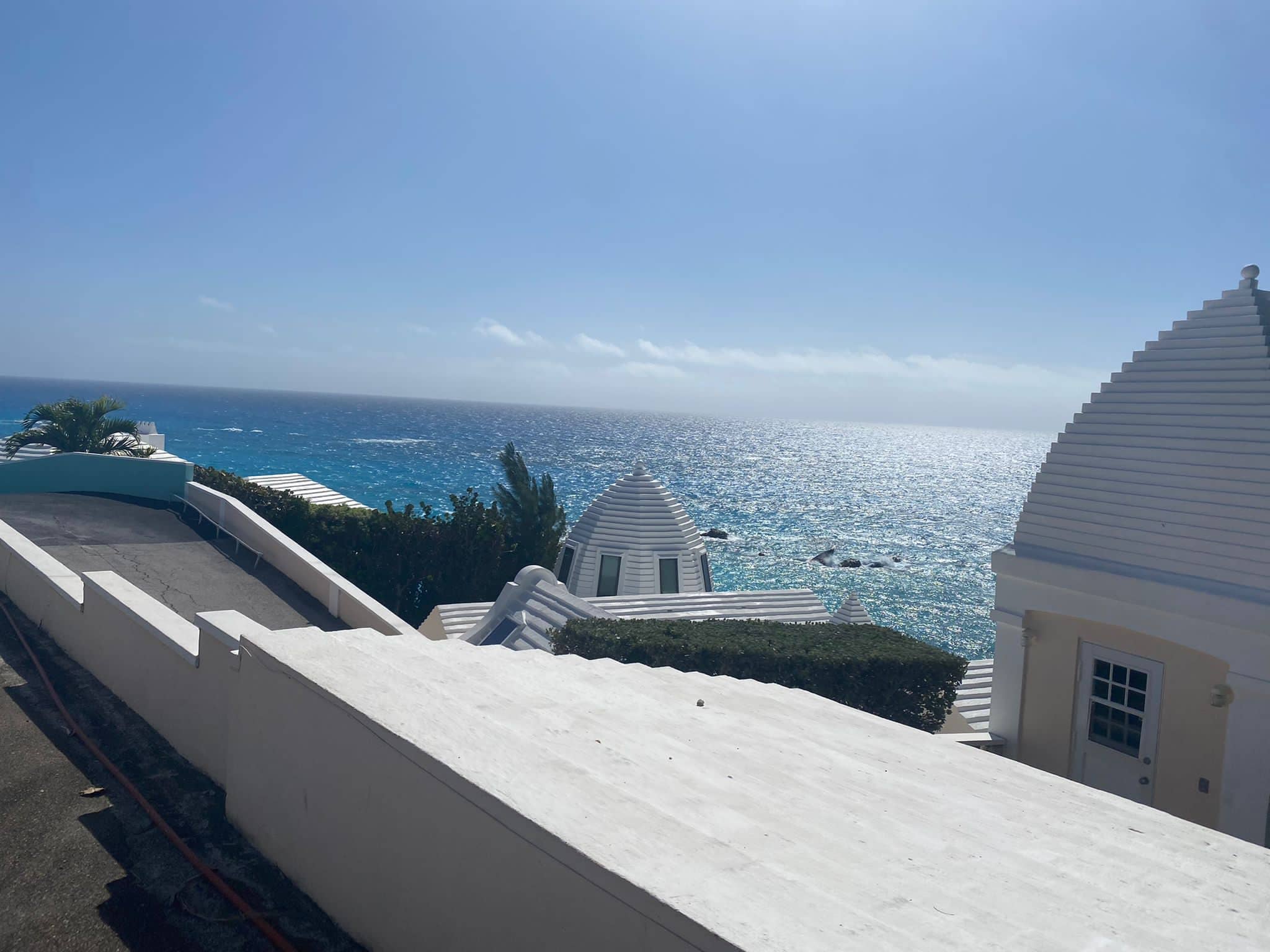 William Shakespeare’s play “The Tempest” is believed to have been inspired by the wreck of the Sea Venture in 1609 sailing to Bermuda.

This island became and continues to be an exclusive holiday destination, for rich British, Americans and Canadians, and the occasional princess as the protagonist of the novel that I am going to talk about today “The Paris bookseller and the Russian Princess” by Mary Ann Clark Bremer. It tells the story of an elegant bookseller in the Jewish quarter, in the Paris of the 60s, and a Russian noblewoman who loves literature. They are both middle age, love literature, are united by books, their stories, their love for people and the beauty of objects. Wonderful short novel to read in front of the superb Bermudian waters. 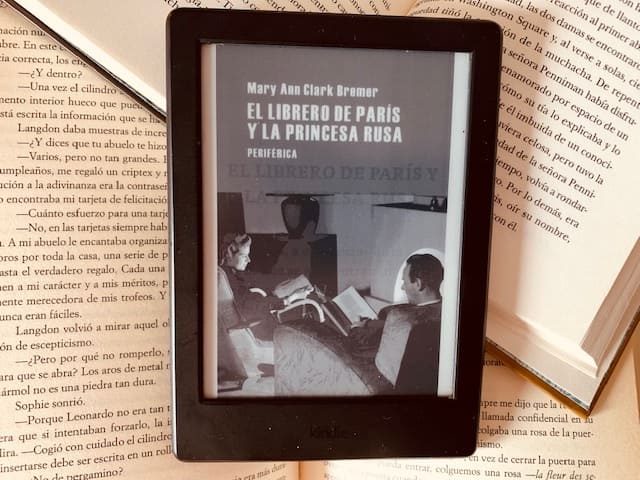