The Buddha and the music of Hong Kong 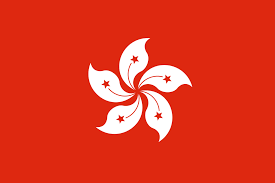 Hong Kong is one the China’s Special Administrations, and the Hong Kong dollar is its currency. Its name means “fragrant harbour” and it is located near Pearl River. I totally agree when Wikipedia says it is the fourth-most densely populated region in the world, as the little peninsula and its islands are full of live, locals, visitors and business men. 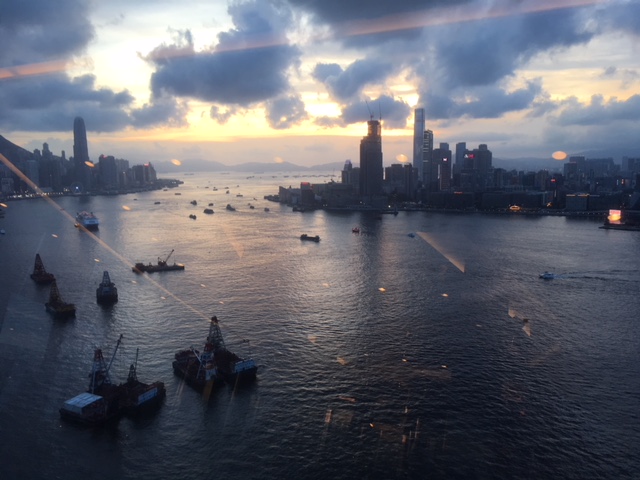 Since there is no much of space for so many people, its constructions are based on skyscrapers planted here and there, I must say that its geography is spectacular thanks to the river, the harbour and the mountains, and all of a sudden, boom, tall buildings looking like masts appear out of the blue. 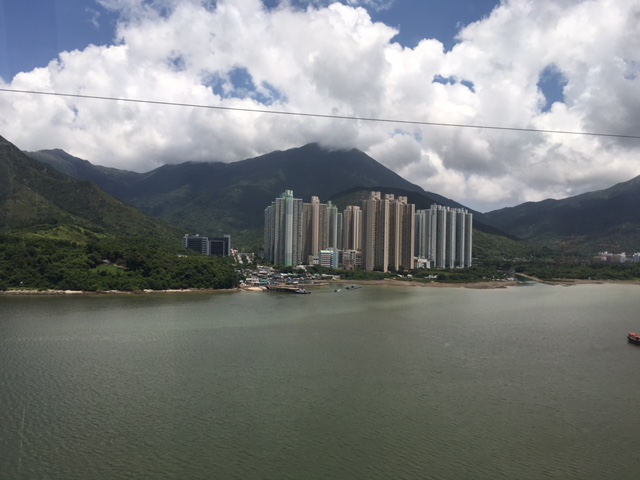 The city is a very important financial center, reason why so many people pass through or move there for business.

In one of my visits I met a very kind American queueing to get on the cable car which would take us to see the Giant Buddha. It was a very hot and sticky Sunday in the middle of the summer, and we weren’t the only ones who had that same idea, so we took it easy and became friends.

The biggest Buddha in Hong Kong, Tian Tan, is on top of the island of Lantau, reason why we took the funicular, even though you can take the bus, you’d miss a very impressive view of the mountain and port. My new friend Curt and I booked a seat on the one with the glass floor, IT WAS GREAT!, I loved it, although I think some of our fellow travellers weren’t sure to have made the right decision, so I encouraged them to sit on the floor and take some good shots. In the end I think we all had fun with no  too much vertigo. 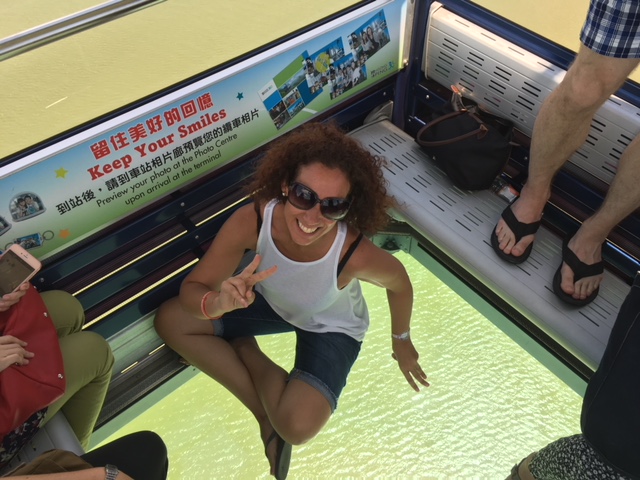 The ride up to the mountain was, of course, beautiful. The Big Buddha appeared in the high and far distance, very small. Getting off the cable car we arrived at Po Lin Monastery, which is in a very small pretty village on top of the mountain. 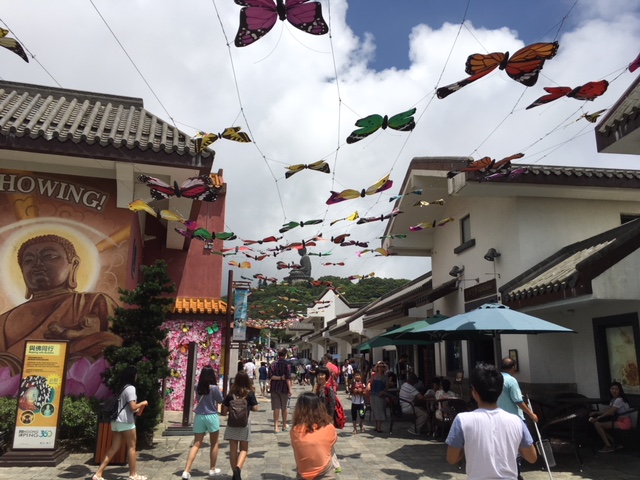 We strolled around its streets, till we got to a big square, from there we could see the Great Buddha, big and imposing at the end of a long flight of stairs. We decided to go up to see it closer. 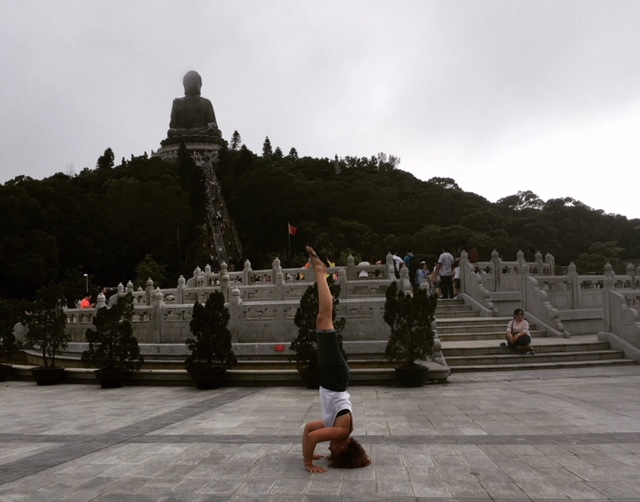 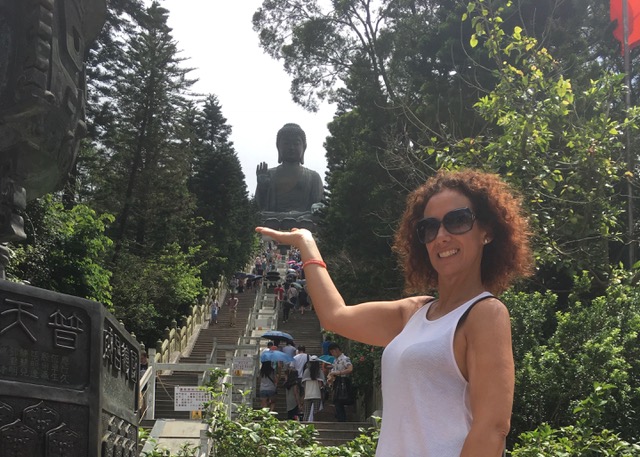 The Great Buddha sits on a lotus flower and it is guarded by six statues that, according to what I read, represent “The Offering of the Six Devas that are posed offering flowers, incense, lamp, ointment, fruit, and music to the Buddha. These symbolise the Six Perfections of generosity, morality, patience, zeal, meditation, and wisdom, all of which are necessary for Enlightenment”. 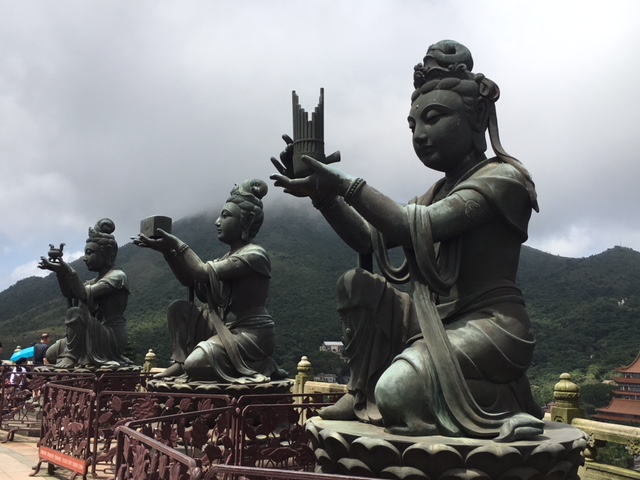 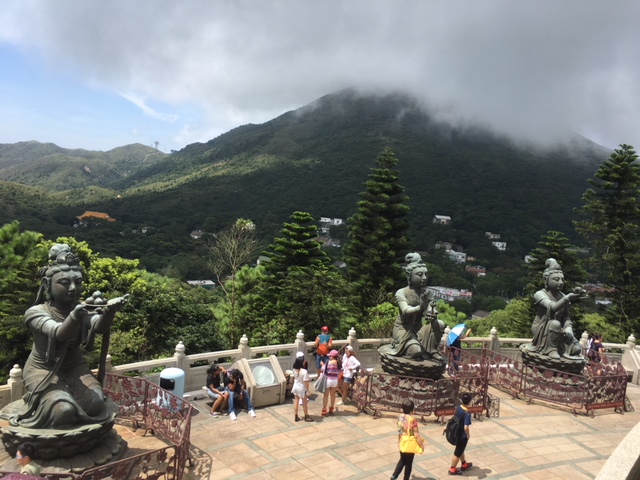 You can access its interior and find a small relic that belongs to Gautama Buddha, I invite you to visit it and see what it is. 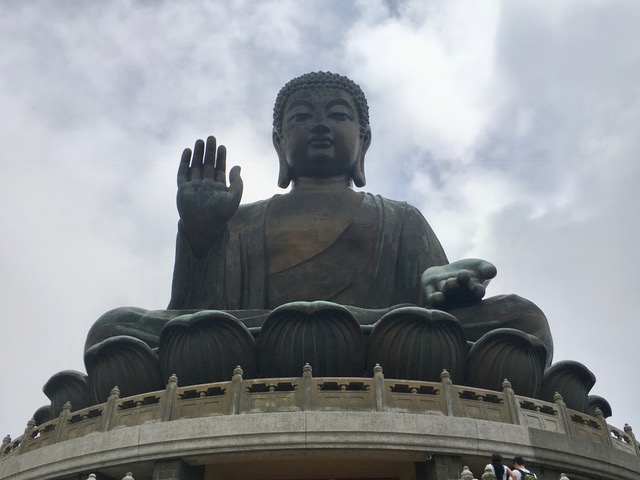 I was very happy spending up there next to the Buddha, in front of so much beauty which could be admired all around the 360º degrees. I could feel peace and a wonderful energy. 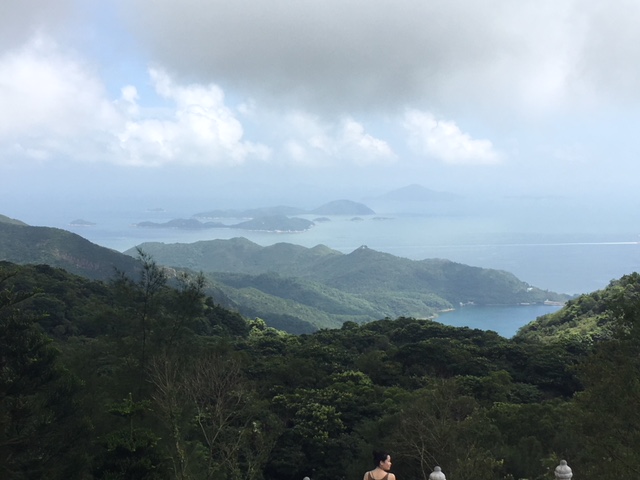 This temple is the biggest Buddhist Center in the whole of Hong Kong, when we took the stairs down Curt invited me to sit inside and meditate, which was his initial intention before he met this nomad and became a photographer. 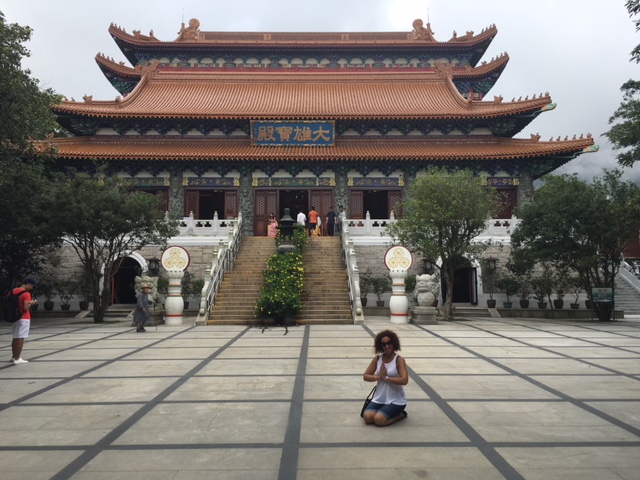 I was happy to go with him, we spent a while meditating. After that, outside we met a few very nice and curious “pets”. These very friendly cows live around the temple and they even lay down for you to scratch their tummies, they are ever so sweet! And besides sacred, they are also so happy up there and, with so many visitors they enjoy constant attention. 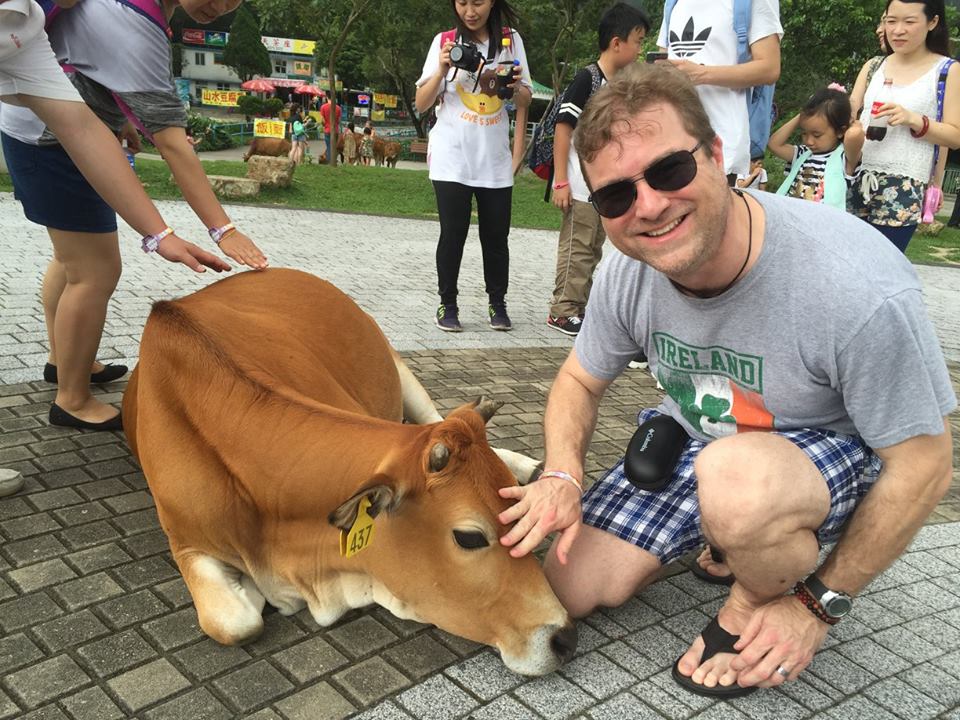 Back in the city and after saying good bye to Curt, I went to Victoria Harbour. Every day at eight in the evening there is a super cool spectacle of light and sound. The skyline becomes alive, the buildings seem to dance when the lights move to the rhythm of the music. You can’t miss it. I watched it from the Promenade of the Stars where there’s also a Cultural Center.

You can also take a cruise around the bay and watch the symphony of lights from a boat. I enjoyed watching a traditional Chinese vessel with its red sails sailing in the bay in front of the modern skyscrapers that fill it, and this is how I immortalized it. 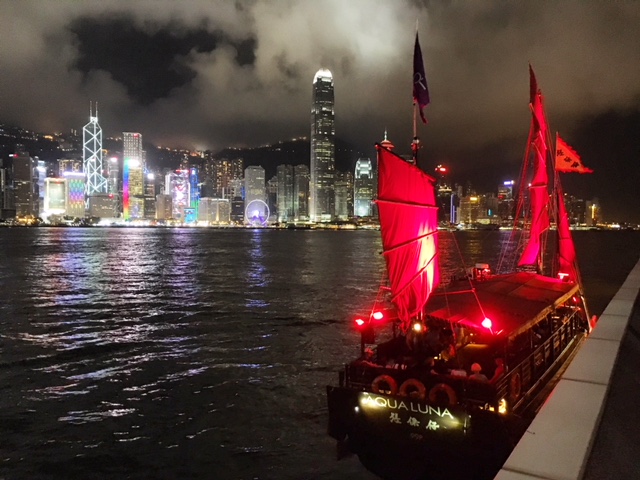 Some of my visits to Hong Kong happened when I had final exams, that is why the place reminds me of many of the books I had to read when I was studying my degree. Today I’d like to tell you about one I was surprised to love when I read it. I wasn’t expecting much and I ended up spending some jet lag nights attached to it. I am talking about a classic from the romanticism in English literature, Frankenstein by Mary Shelley.

This great author tells us, through letters Walton sends to his sister, how Doctor Victor Frankenstein creates a being with a monstrous aspect in a society that, excludes him and that is not ready for something like this. The doctor goes dangerously beyond the limits of his knowledge when creating a monster with such human feelings who ends up sinking in a great solitude from where he tries to escape.

The monster harbours revenge, rage, hatred when Victor destroys the partner he was creating under the petition of the creature. Under all that pain, he destroys everything Victor loves. I invite you to get to the conciliatory end through the story of this monster and his relationship with his creator. 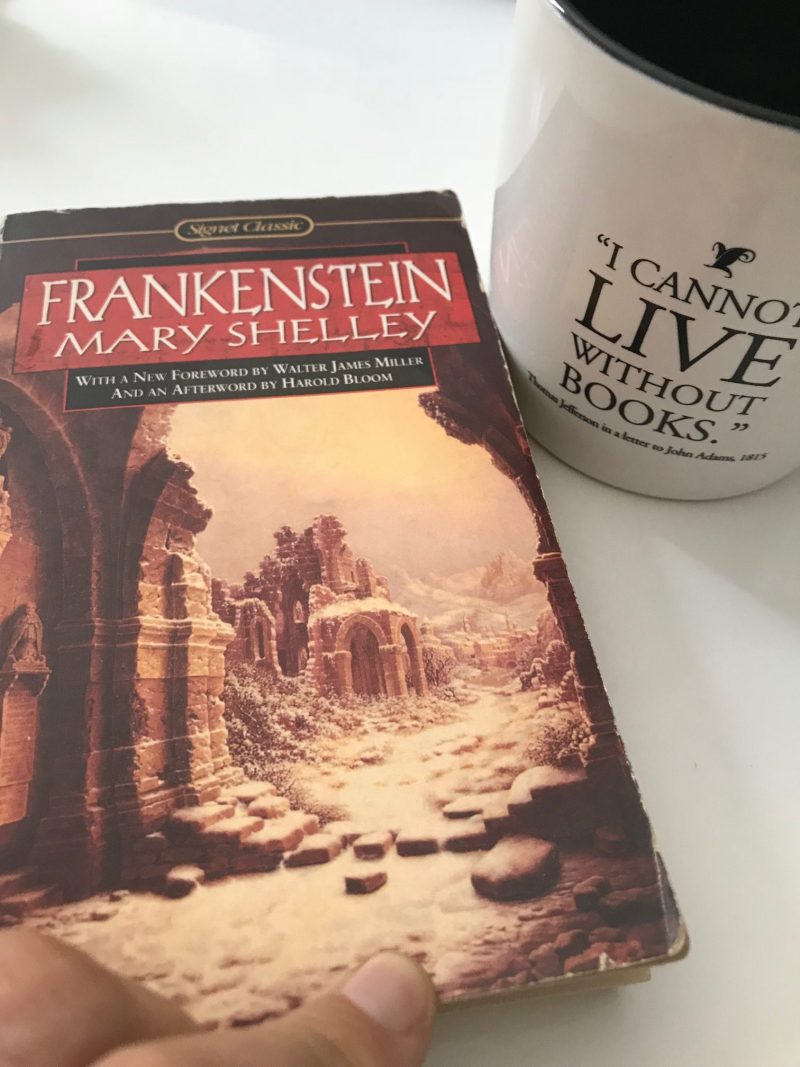