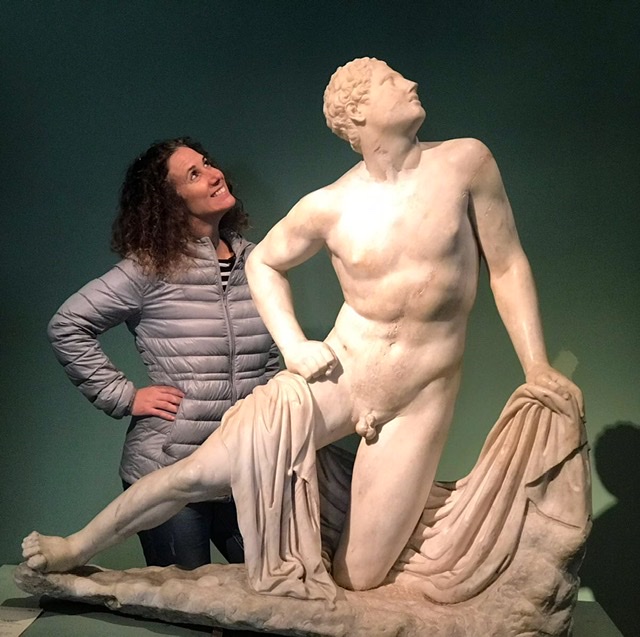 Today I go back to Pincio’s Terrrace, I walk around this beautiful park full of Roman statues, fountains & a lake liven up by the music of this artist that enchants me like the “Pied Piper of Hamelin”

I have my ticket that I bought in advance, I arrive earlier to drop off my bag & hire an audio guide. Here I am super excited, in the beautiful Villa Borghese. 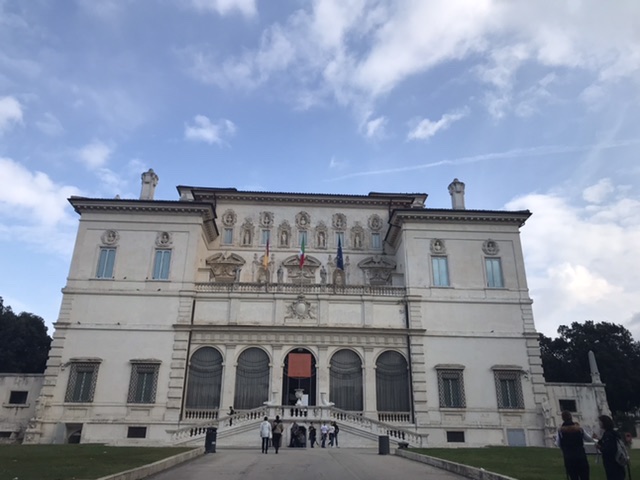 In the Renaissance there were some prominent citizens who loved art & put together grand collections, one of them was cardinal Borghese. His villa has become one of the most beautiful museums in Rome, a must, I’d say. The cardinal Borghese treasured magnificent works of art, besides being the sponsor of the talented Bernini, what a great eye the cardinal had! 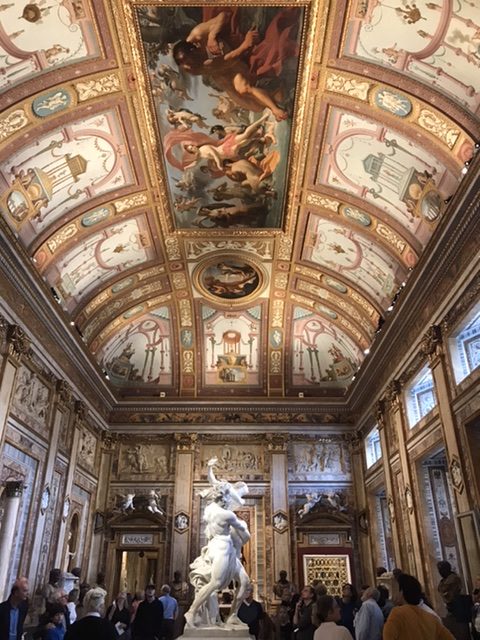 In the museum I admire various works of my beloved Bernini, from his beginnings to his last days, I appreciate the evolution of his works. How thankful I am today to his sponsor!

My favourite piece is “Daphne & Apollo” for which the dictionary has not enough words to describe it, it’s EXCEPTIONAL. 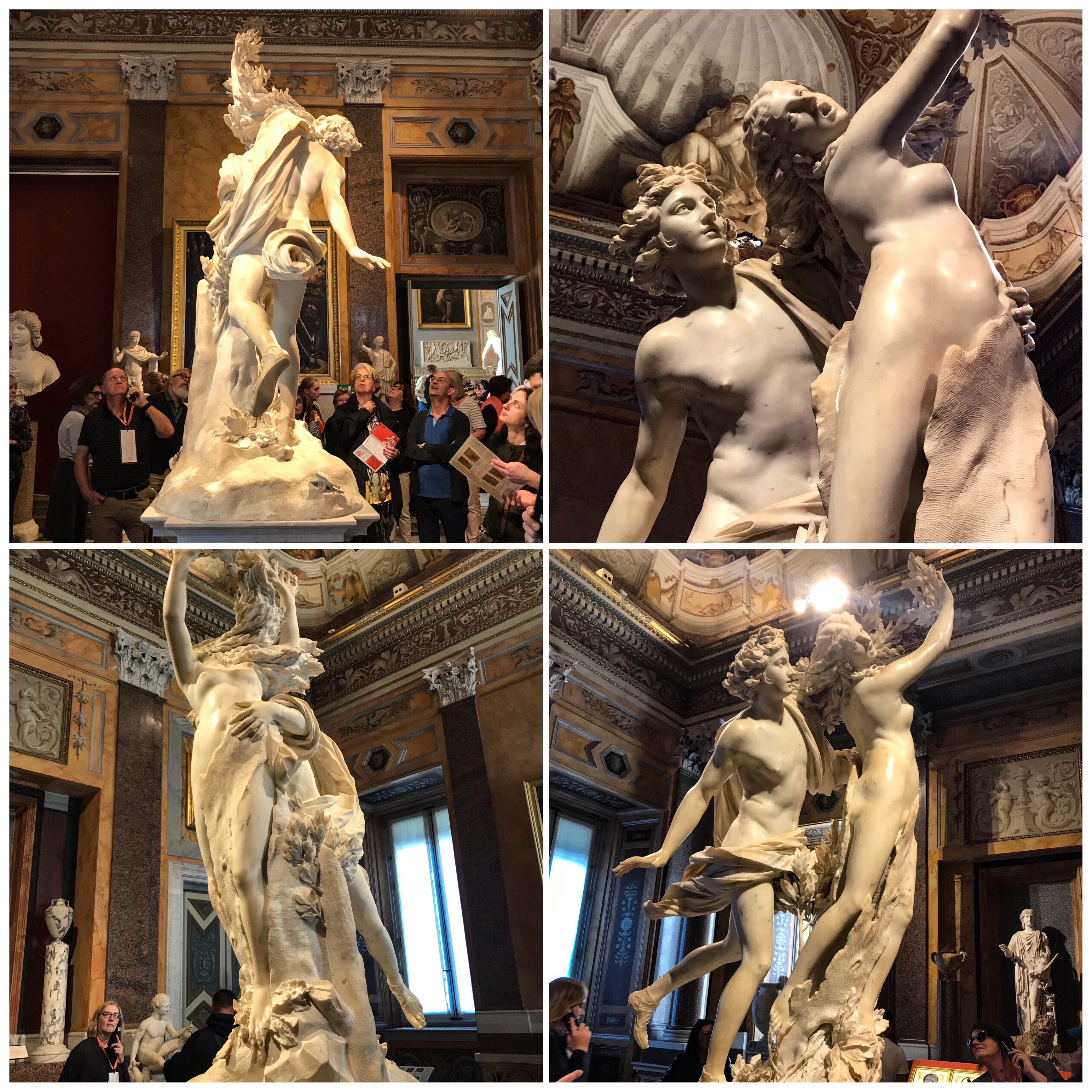 I shared their legend on Instagram, I’ll write it again for the ones who don’t have social media as it is very beautiful, & for you to learn the meaning  of the laurel crown the sport winners or poets wear.

<< The vengeful Eros threw a golden arrow to Apollo for him to fall in love with Daphne, & an iron arrow to Daphne so she would hate Apollo, imagine the jam! Apollo followed her & she begged her father for help, so he transformed her into a laurel tree so he wouldn’t posses her. Whilst the lover was grabbing her she was transforming herself. He cried saying “if you can’t be my wife, you’ll be my favourite tree & its leaves, always green, will crown the heads in sign of victory >>

Another magnificent work that appears in front of my eyes is the “Venus Victrix” by Antonio Canova. The model was Paulina Bonaparte, yes, Napoleon’s sister. An independent woman that I am sure scandalised a few people. To the question of why she was wearing very little clothing she replied, “why not?” Ole Paulina! 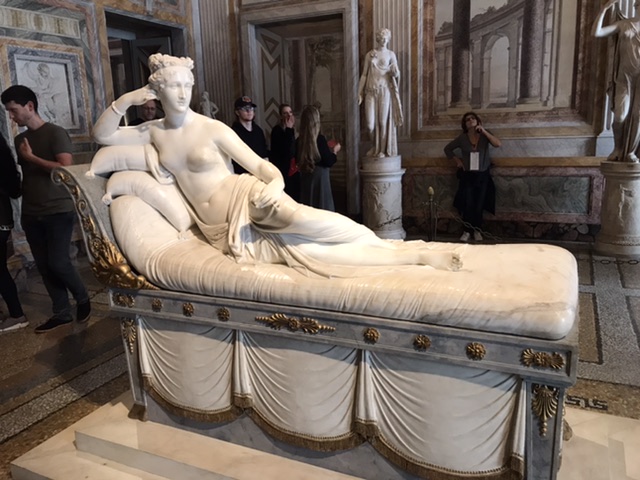 The Villa Borghese is full of wonders, the palace in itself & its gardens also are, so enjoy them for a couple of hours & let me know what you think. 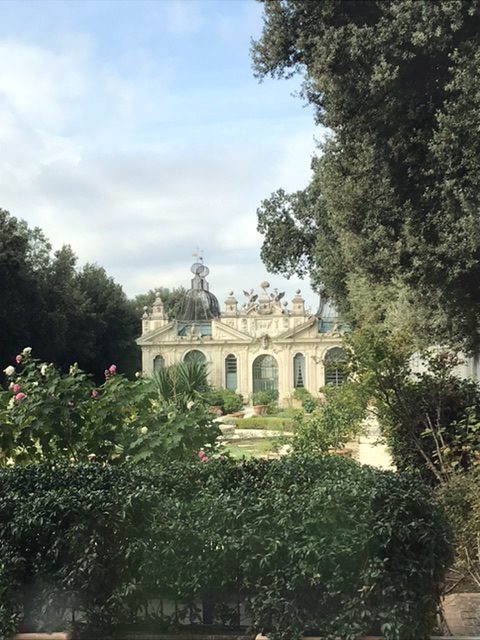 A new morning, I am meeting my friend Basak, we are going to the Centrale Montemartini (1912), a power plant? Yes nomad. Some museums were under reforms & they needed a place to exhibit the works, so in 1997, after leaving the machinery & boilers looking good to welcome statues, mosaics & other beauties, they opened a new museum space for an exhibition. 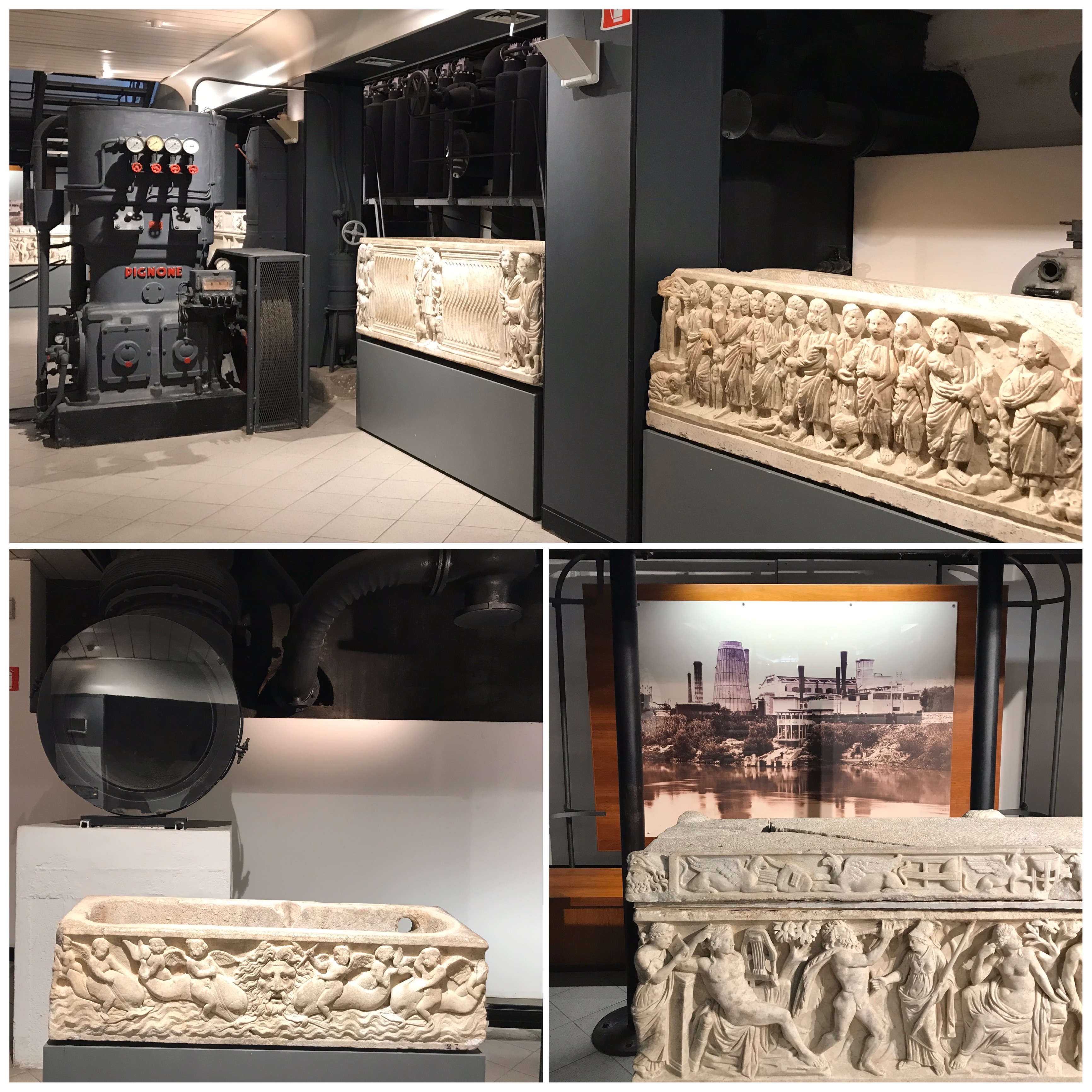 Something temporal changed to be permanent, the Musei Capitolini purchased it & today Basak & I are enjoying a mixture of Industrial Revolution & Imperial Rome, very attracting & delicious. 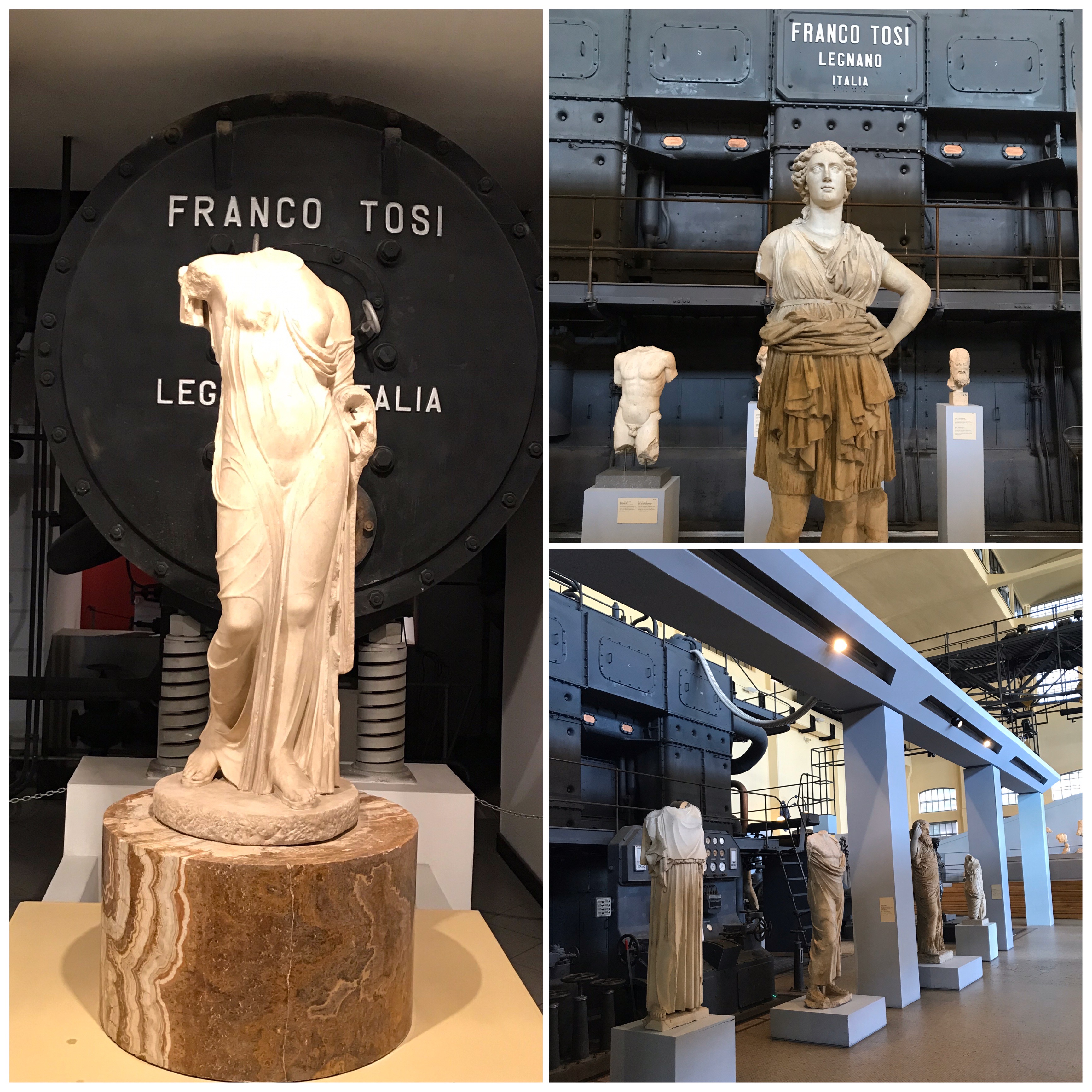 Part of the Pio IX’s train, built in 1858, also lives here. A unique piece I’d say, with a decoration on the engine far more enchanting than the ones we see nowadays.

My ticket includes the Musei Capitolini, we take the bus there, opposite Teatro Marcello, remember? Basak goes on her way & I go up to see it, as I told you on another post. 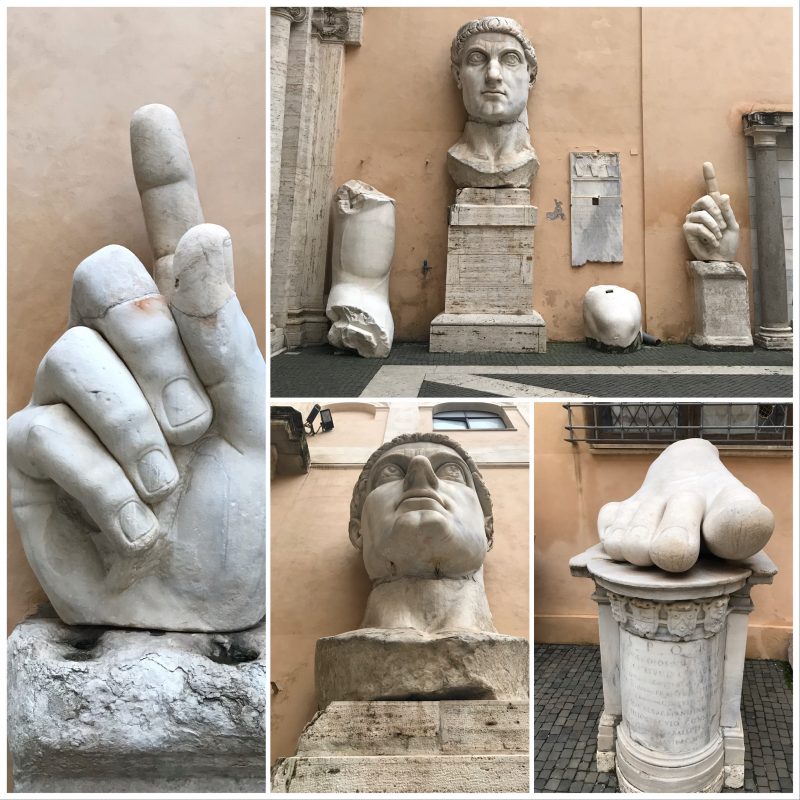 It’s my last day in Rome, I’m about to have a farewell breakfast in Il Siciliani with Basak, a yummy cornetto di crema di pistacchio, & I’ll be on my way to see more museums. 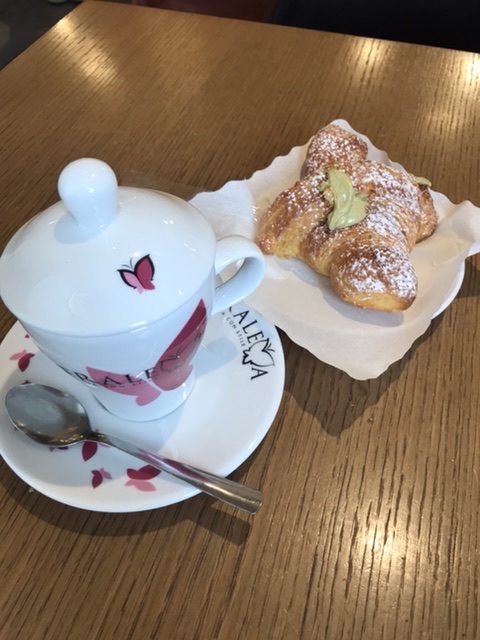 Near Termini Central Station is the Palazzo Massimo, there I buy a ticket that includes four museums of the Museo Nazionale Romano, so off I go to get as many antiques in  as I can; it can be visited in different days, don’t you worry. 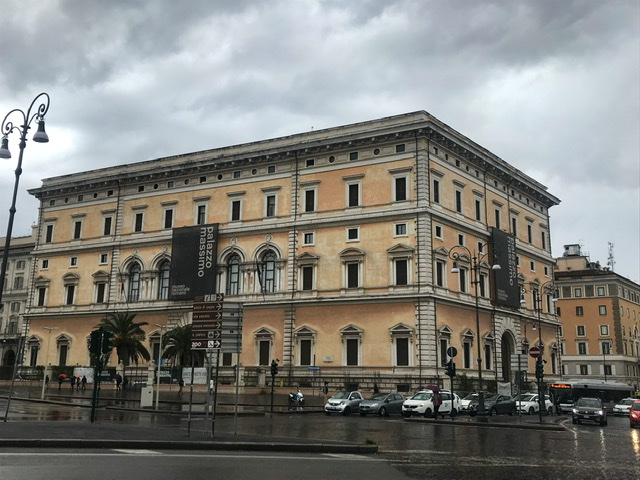 I’m learning a lot about Roman history & this space shows me some faces of its emperors & prominent citizens. 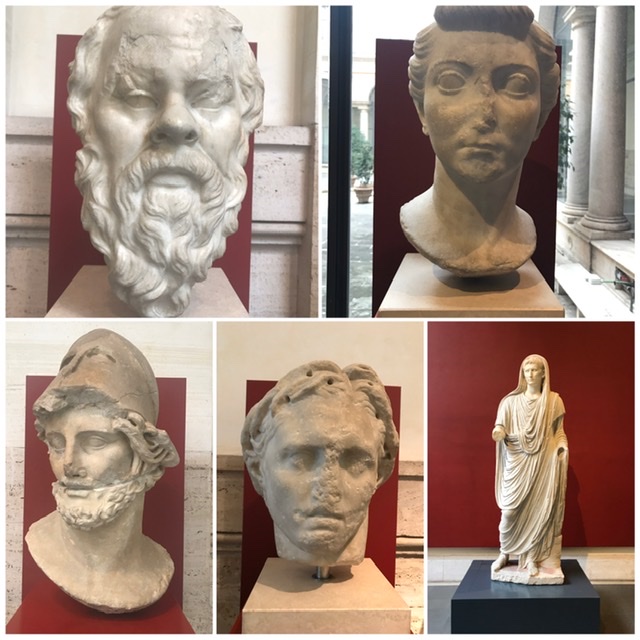 My favourite statue is the Discus thrower Lancelloti, the star of the place. The Sleeping Hermaphrodite is Basak’s favourite, they say it’s inspired by Bernini & it’s divine. 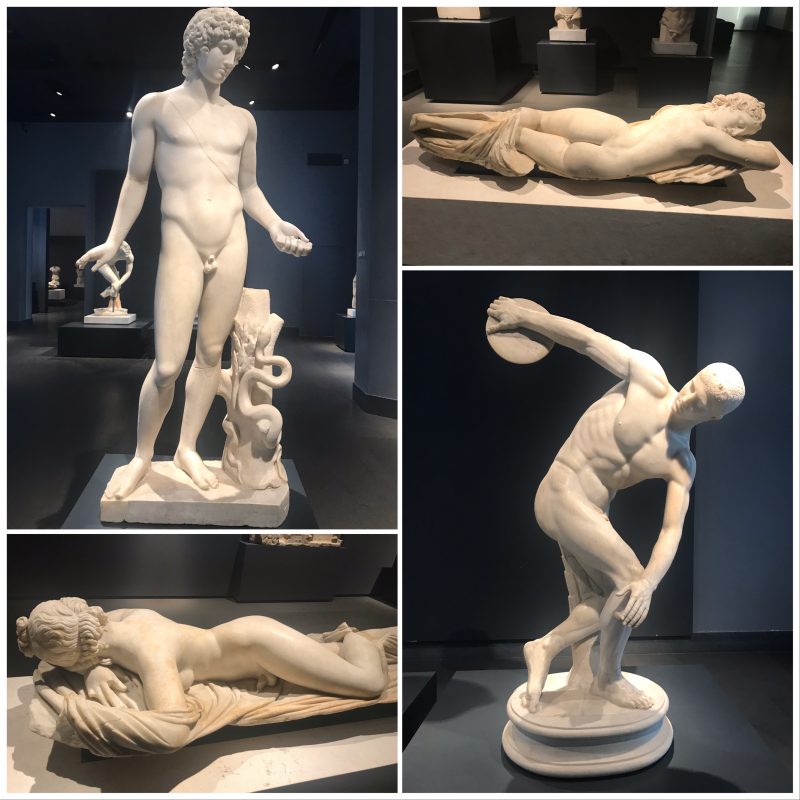 & of course here is Trajan, the Hispanic emperor, shown as the God Hercules. 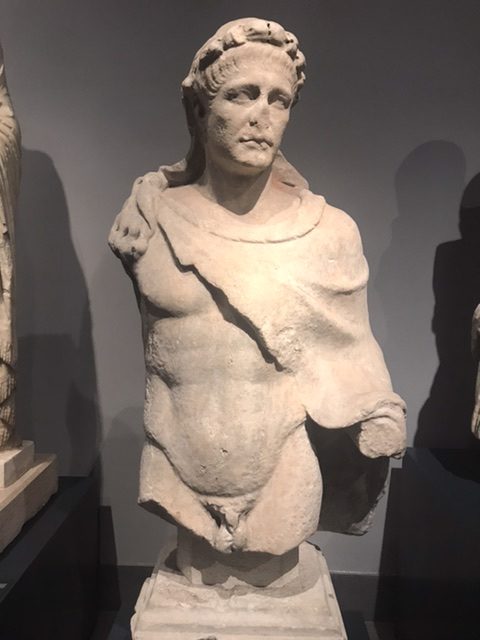 Opposite the Palazzo are the Diocletian Baths, the biggest in the Roman world. 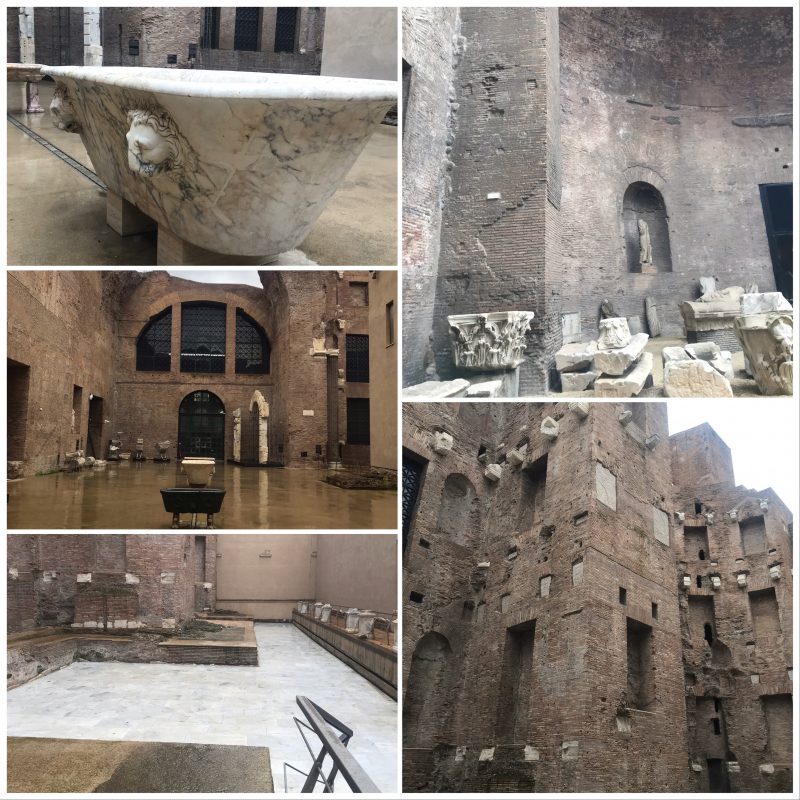 This emperor was accused to sacrifice many Christians in its construction, reason why Pope Pio IV ordered Michelangelo to built, inside the tepidarium, the church of Santa Maria degli Angeli e dei Martire I told you about. 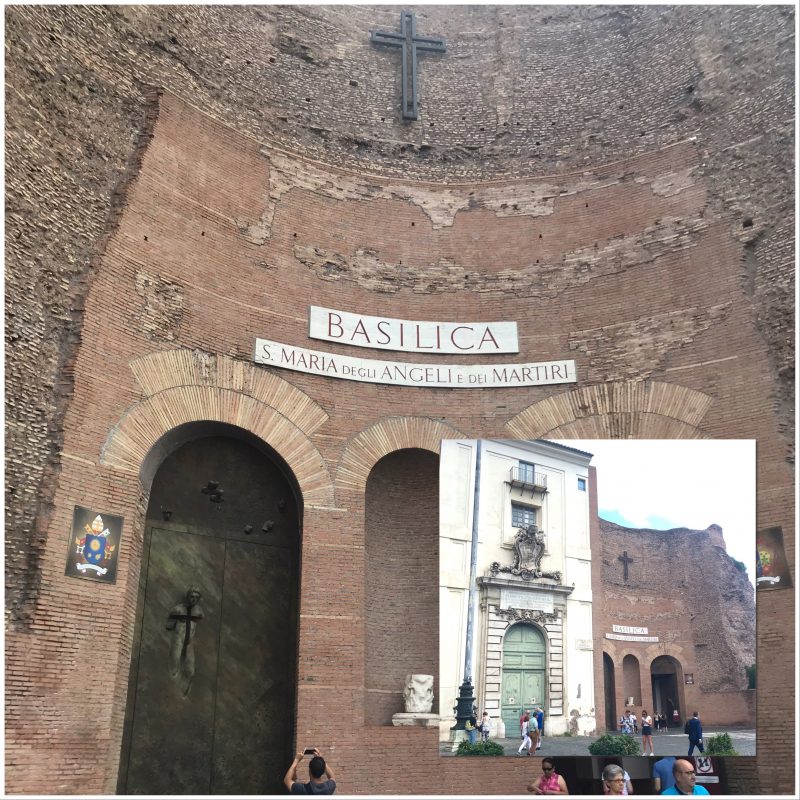 & the church of San Bernardo alle Terme in one of its circular areas. 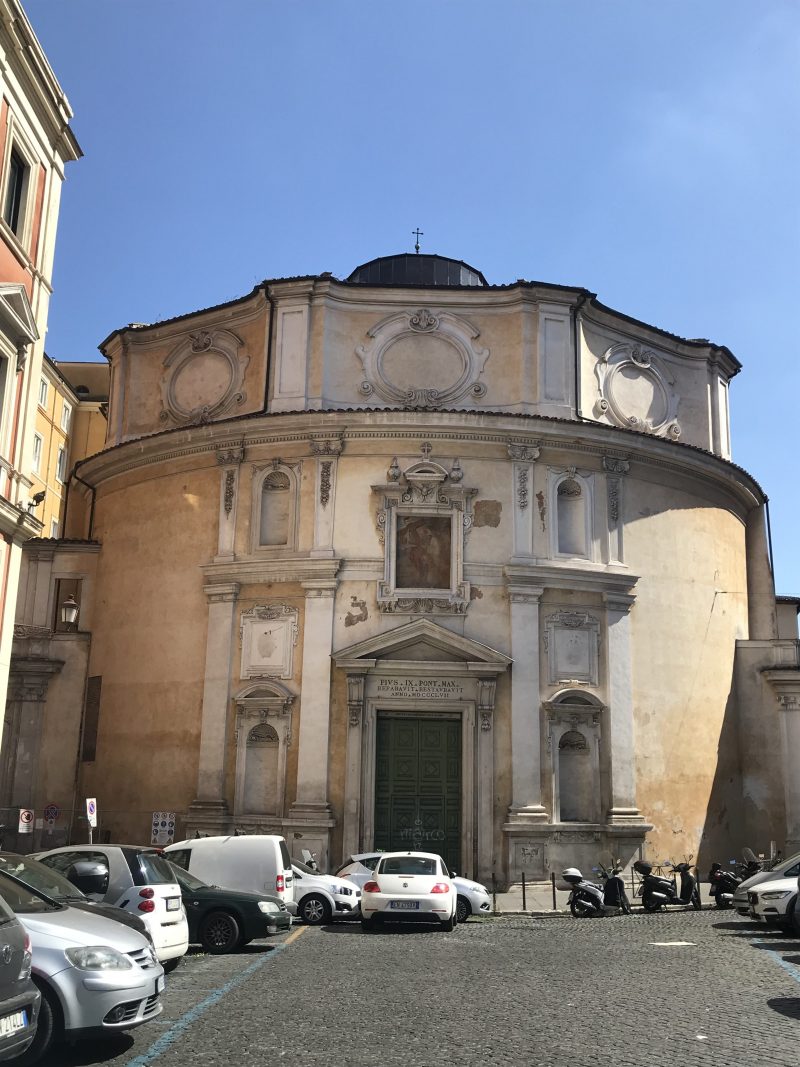 I continue to Crypta Balbi which one day was used to refresh all the assistants of a theatre that was there.

The Palazzo Altemps is the fourth museum with a beautiful interior. 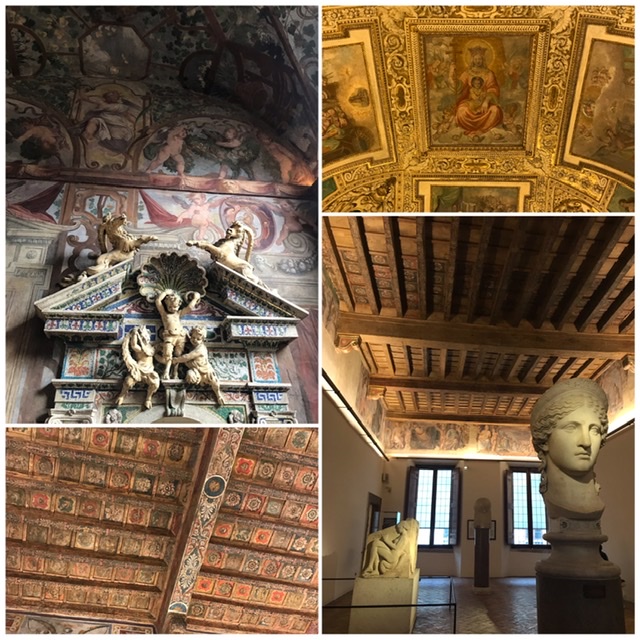 Its patio, veranda & walls are exquisite. 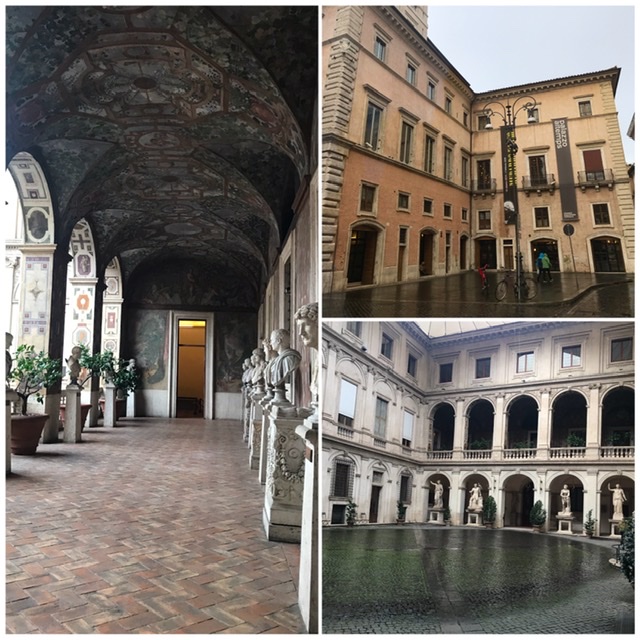 The collection exhibited looks magnificent in this scenario.

A book I had the pleasure to proof read is “El capitán Malapata y la Hermandad de los Brujos” by Peter Blues. A juvenile story full of adventures & an agile reading that entertained me very much. If you like stories of pirates, monsters, friendship & values, this is your book young nomad. I like to support new writers that so bravely capture on their pages feelings adventures, romances, history … to all of them, congratulations for fulfilling this dream, don’t stop, your readers  will thank you for it. 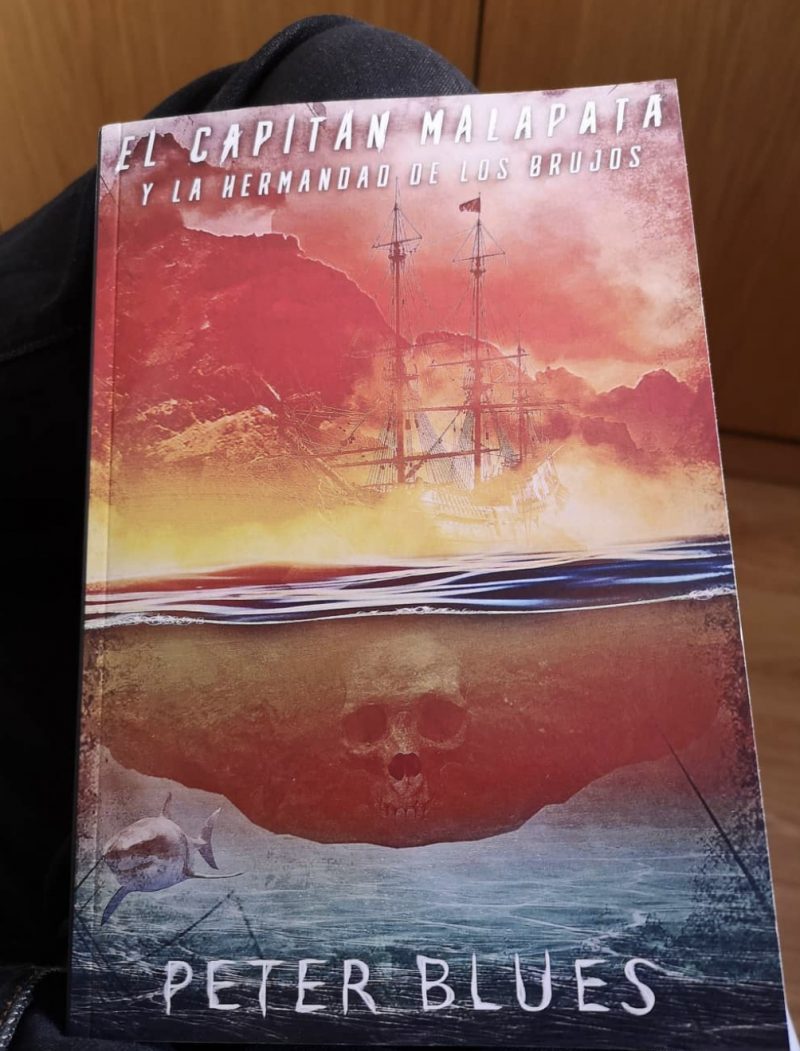