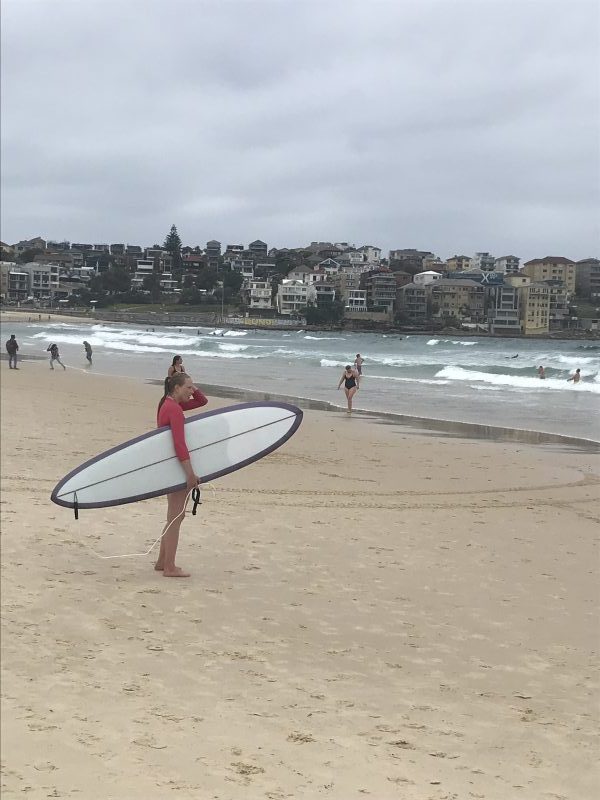 It’s summer in Sydney, enjoying its beaches is mandatory.

The Tasman Sea bathes the Sydney bay. One of its northern beaches is Balmoral Beach, the first one I visited. 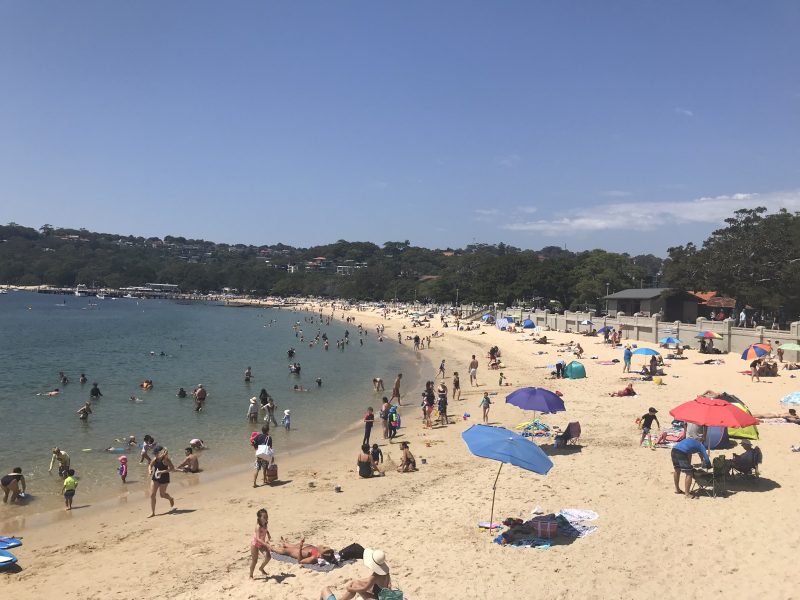 I decided to go by bus. I took the B1 from Milson Point station to Mosman, which was only two more stops away to Balmoral. It is a family beach, quite & with fresh waters, a euphemism for frozen! 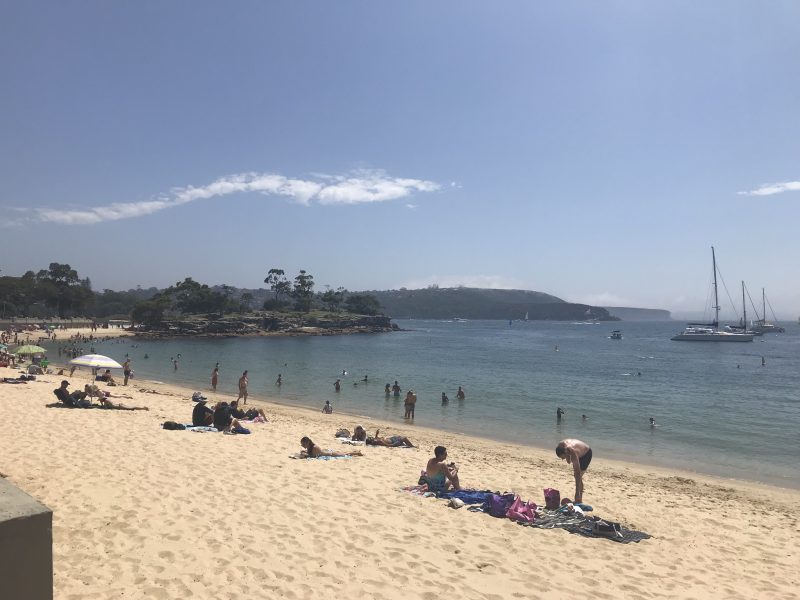 On my way back, I went for a walk around Mosman, when I saw the first of many water fountains I’d find around the country, where you can’t just drink from, but refill your bottle, encouraging the citizens not to use plastic, it also has a doggie bowl too, like all in one! 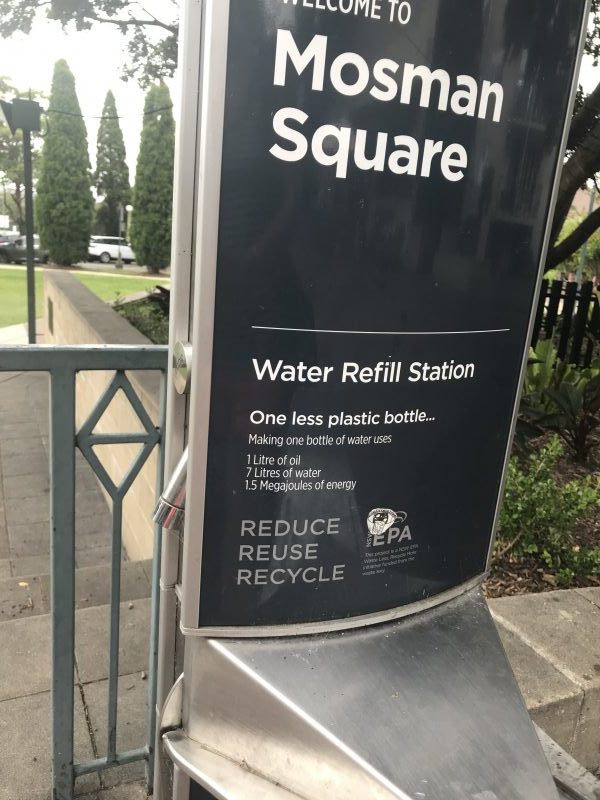 On a rainy Sunday I met my friend Philip, he lives in Madrid but was in Sydney for work. We met in Darlinghurst, which is the LGBT area of the city. The rain gave us a break so we went for a walk in a park. He had to rest so I took a bus to Bondi beach, as you can see I was making the most of my opal card & public transport. Every Sunday there is a flat rate of AU$2.70, you can take as many buses or trains as you wish.

Bondi Beach is one of the icons of this city & one of its most famous beaches, it’s been a lot on TV, magazines & postcards. Even though it wasn’t a good day there were many surfers in the water, if there are waves who cares if it rains, right? 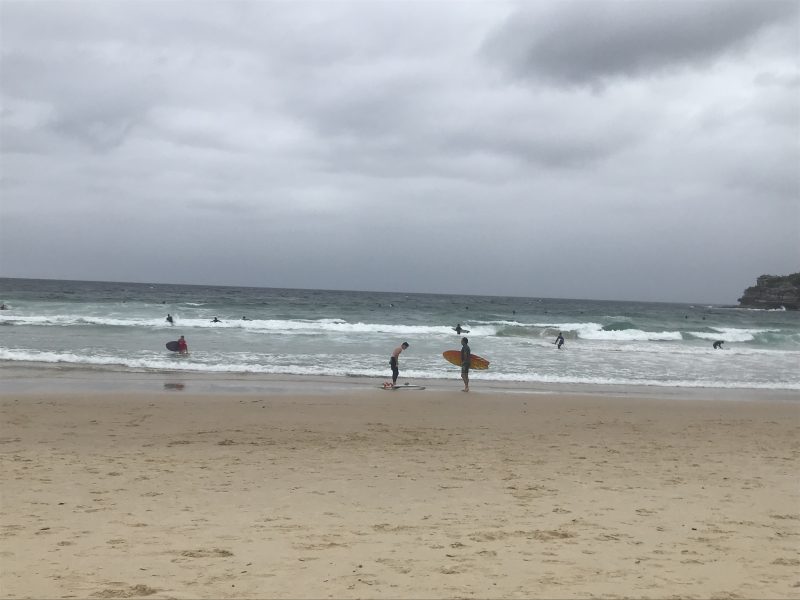 Every Sunday there’s a flea market. When I arrived they were closing, so I left it for next time. What I also left for next time was the Congee or Bronte coastal walk from or to Bondi. 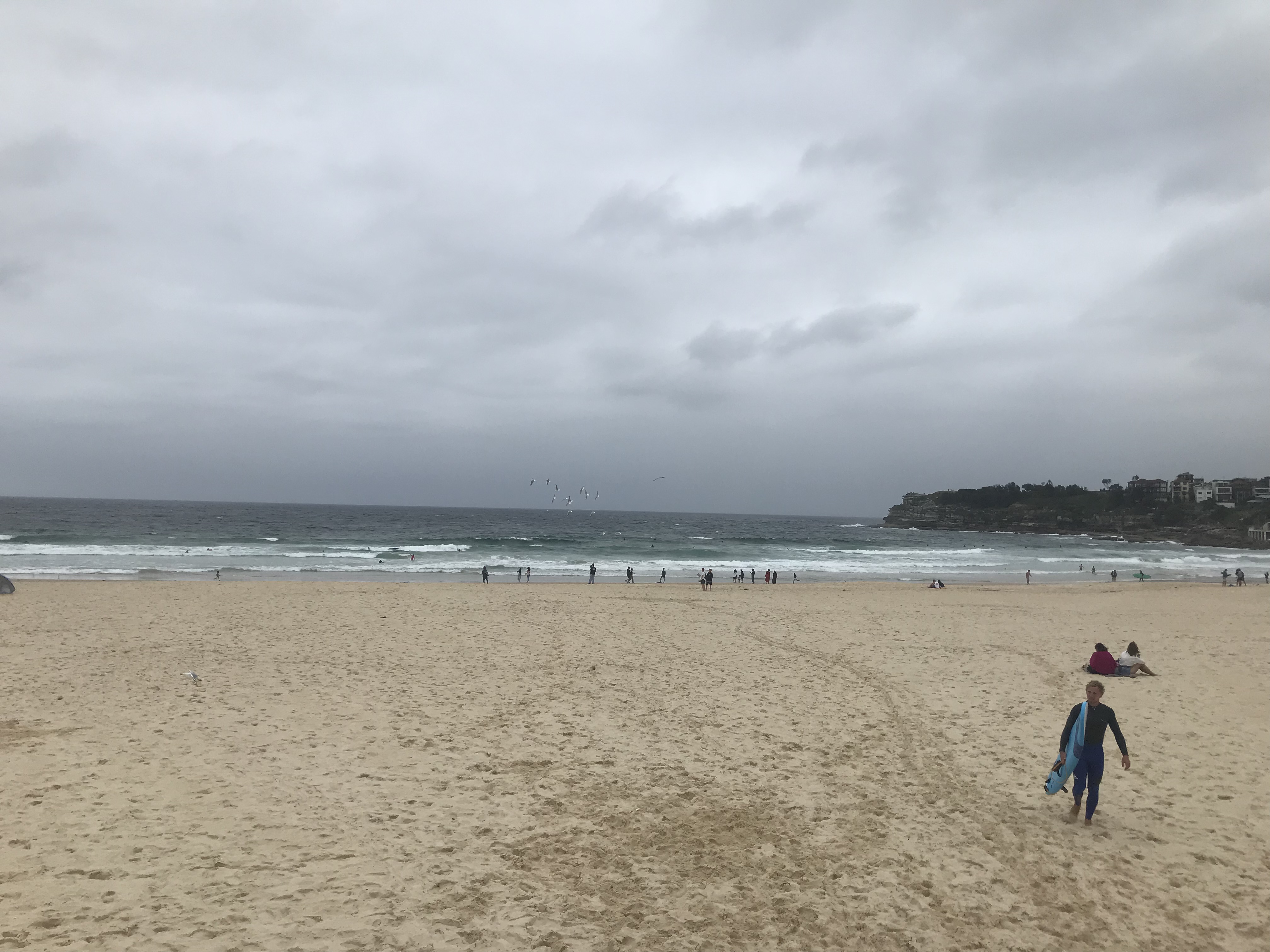 The day I did the Free Tour I met the lovely Karen, a nomad from Manchester. One day we went to Manly Beach by ferry. I took it from Luna Park to Circular Quay, where we met. From there we took the ferry direct to Manly. I heartily recommend it, it’s fantastic to go there on the boat, you’ll be able to admire the bay from the sea. 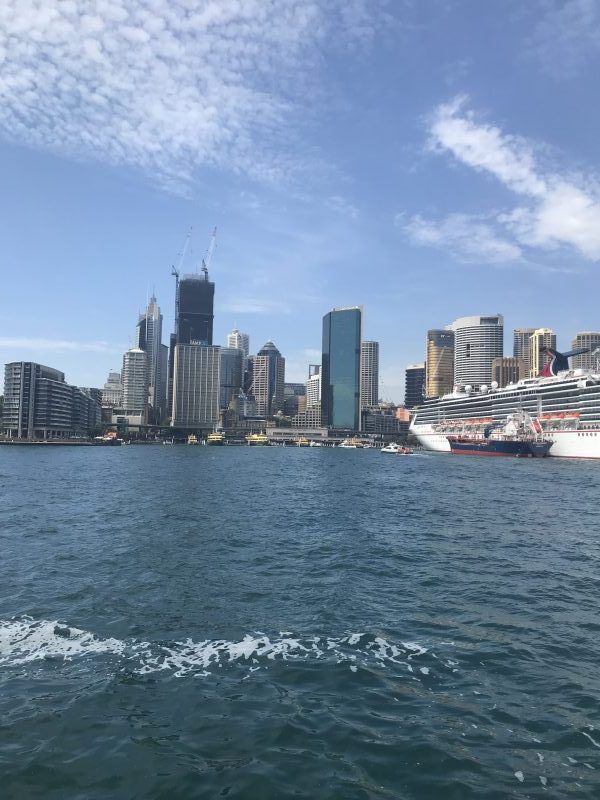 It’s a very popular beach amongst surfers, with strong currents & constantly guarded, that doesn’t stop crowds from going to play beach volley, surfing or swimming, where it is allowed of course. 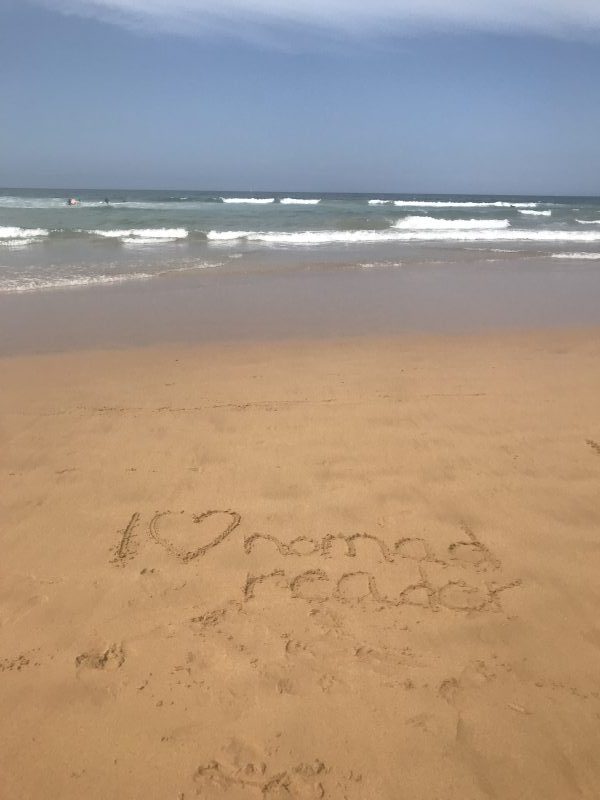 It is very lively & full of restaurants. We found one, the Banana Blossom, where we ate a giant vegan bowl called “pure Buddha”, yummy, yummy! 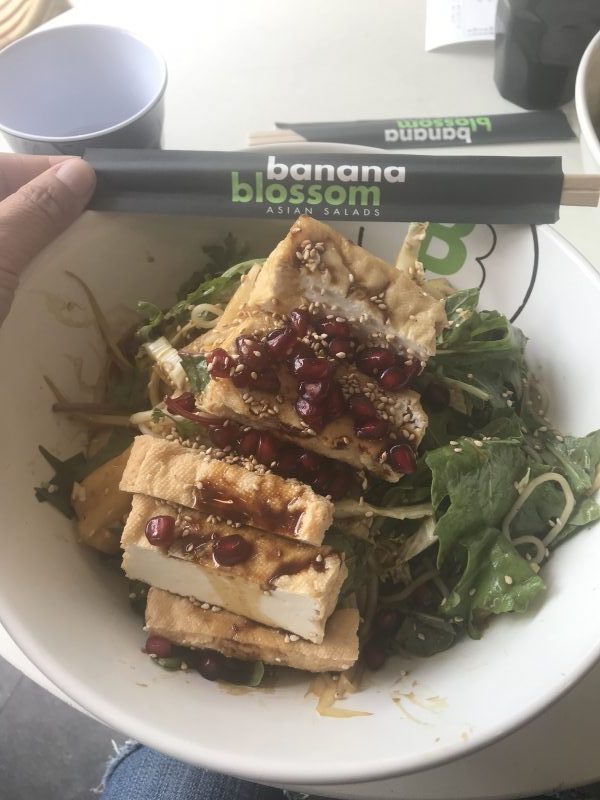 We took the ferry back, the ride was also gorgeous, the sun was coming down so we decided to go to Darling Harbour, yes, another place with “my nickname”. 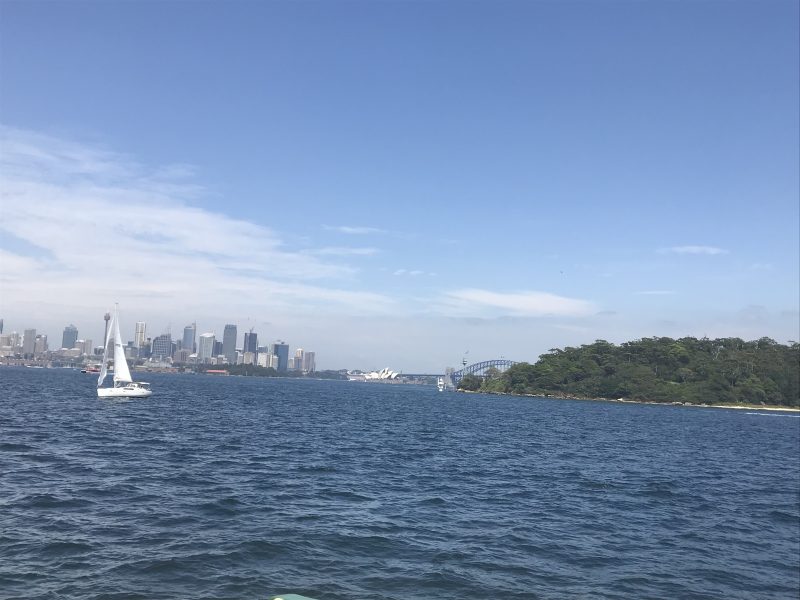 Darling Harbour is another one of those charming places in the city, with many restaurants & cafes, where every Saturday night, at nine, they launch fireworks, another excuse to go for a little night walk in the área. 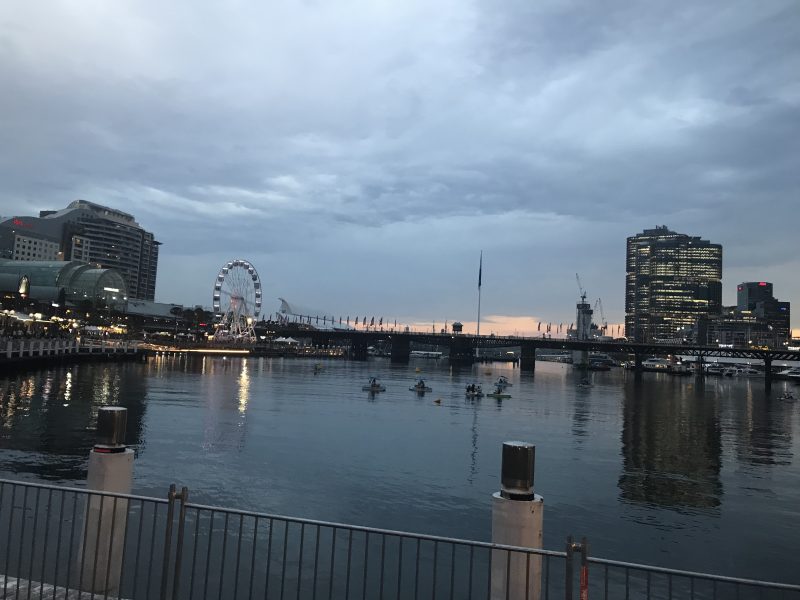 We arrived during the sunset & were able to enjoy that blue light that invades everything before it goes dark. 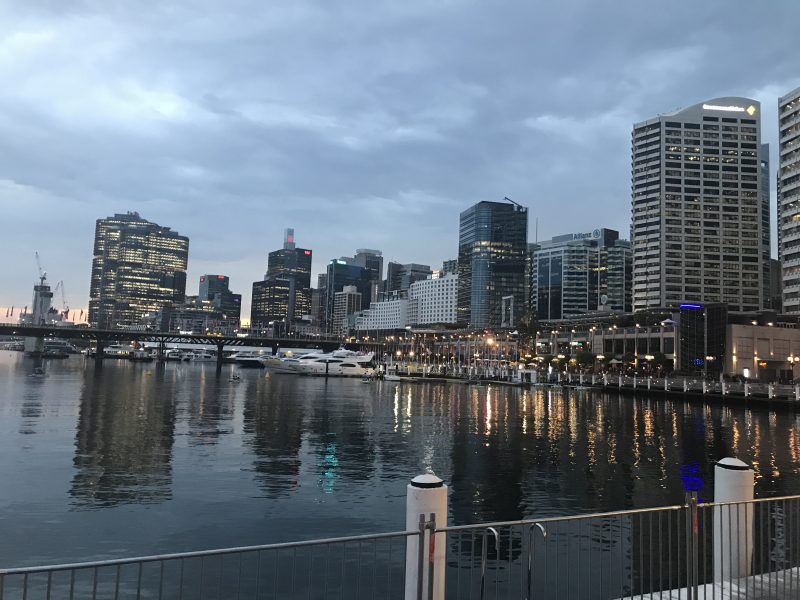 Near Darling I saw there was the Chinese Garden of Friendship, I took a mental note to go back & visit it on my last day in Sydney. 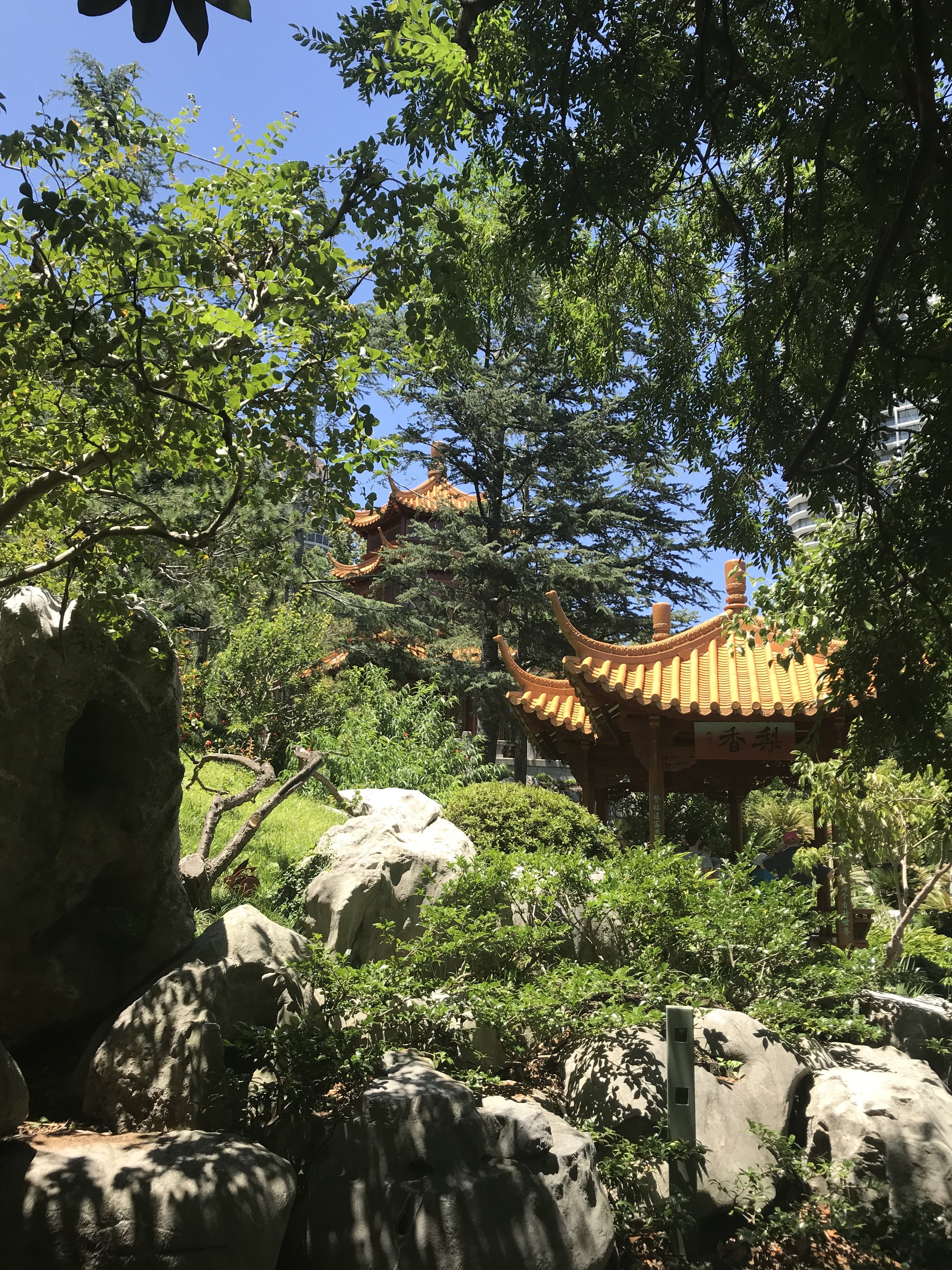 The Chinese Garden of Friendship is a small, peaceful & serene oasis in the middle of the city where you can have a stroll, have some tea or play some activities with the children. 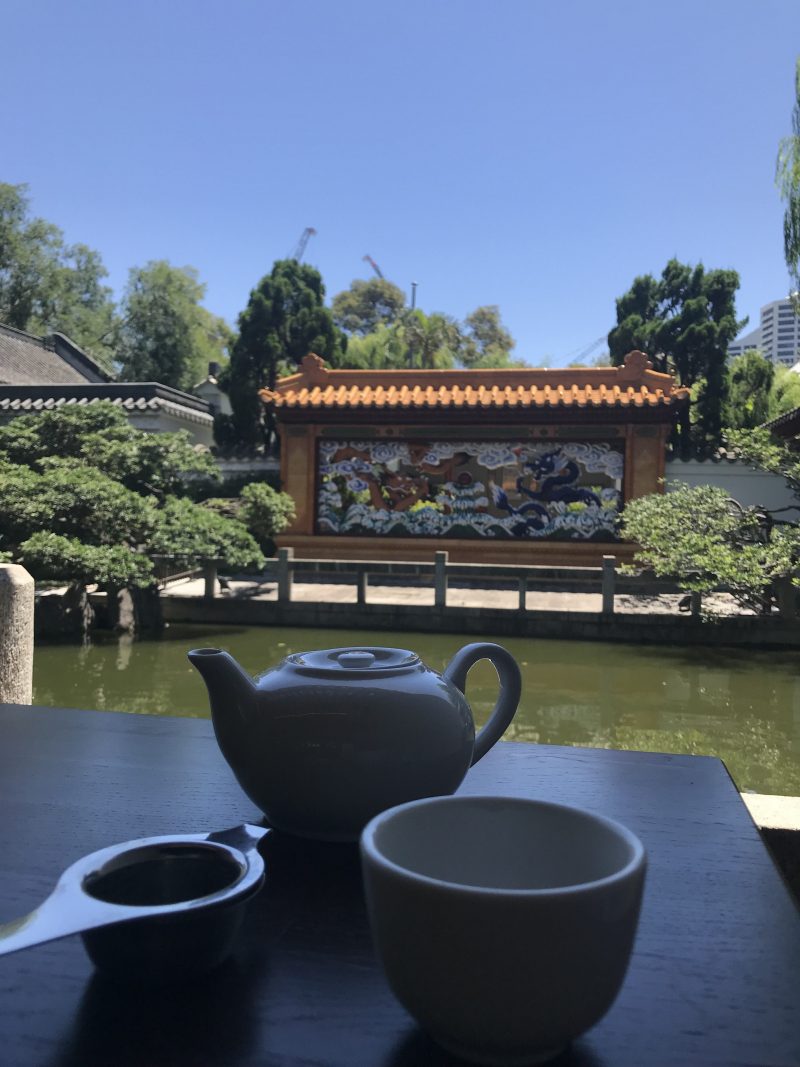 Or read a book, like this one I am going to tell you about today. “The curious incident of the Dog in the Night-Time” by Mark Haddon. A short book where the narrator is a fifteen year old boy with autism, even though it’s not mentioned in the book. The boy investigates the death of his neighbours’ dog, using an overwhelming logic which leaves the reader open-mouthed. The character doesn’t understand of facial expressions that show feelings, but he does have a photographic memory & he is also an ace in math. He lives with his dad who lies to him about his mother making him believe she is dead, he discovers her letters, she lives in London, where he goes to find her, all alone by train. A masterpiece narrated from Christopher’s view of the world & his story about how he discovered who killed the dog at night-time. 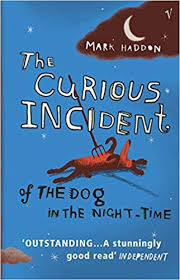 One thought on “Beaches, harbours & gardens in Sydney.”