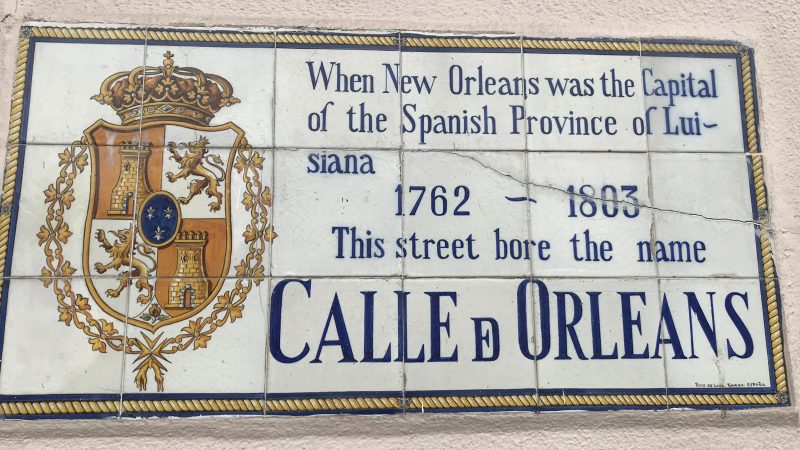 I arrived to New Orleans just before carnival, the celebrations of their famous Mardi Gras festival had already started.

I got up early & decided to go for a walk, to see what I’d find at those early hours. I went to Canal Street with St. Peters where the Rock `n` Roll maratón was taking place, one of the events of the festival & the reason many of the streets in the centre were closed. 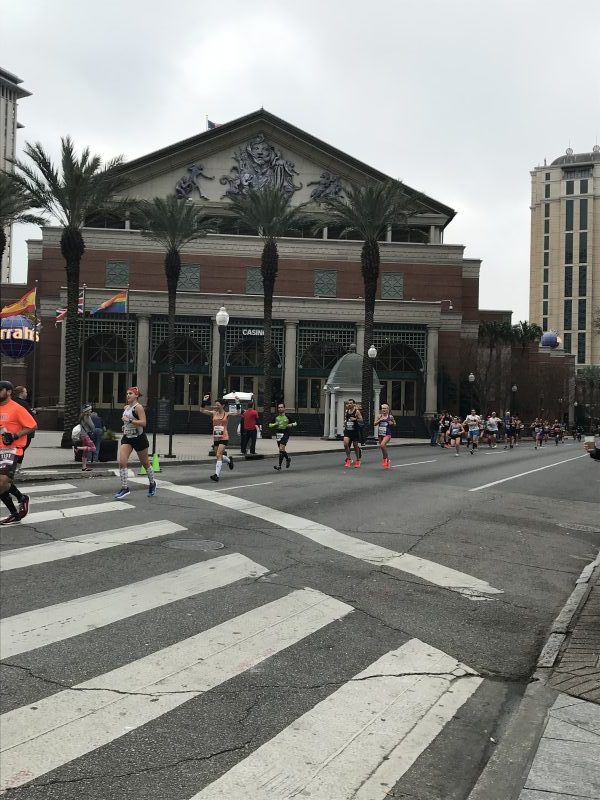 Strolling towards the park I wanted to visit I found myself in a church. I think I felt drawn to it by the music, the Sunday mass was about to start, so I decided to stay, it was my first ever gospel mass. They sang heaps of beautiful songs, it was very nice & emotional, I even cried with some of them. 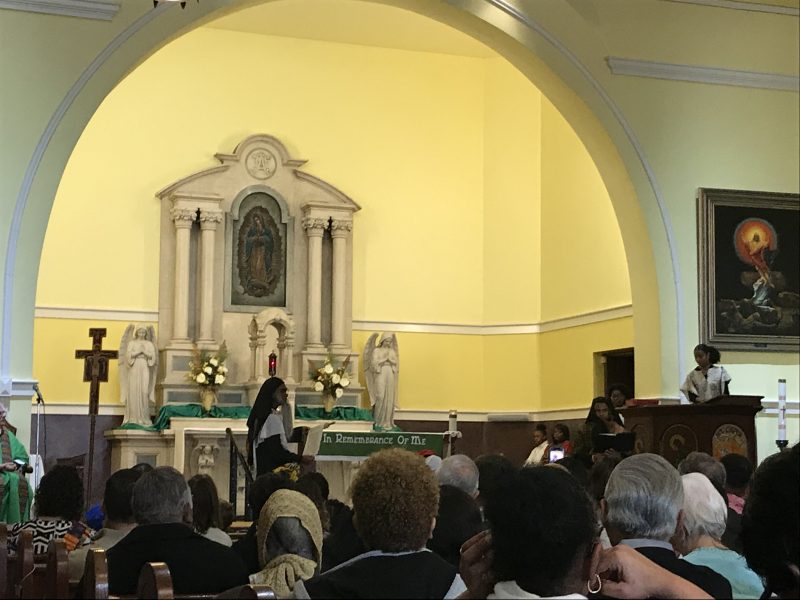 When they finished I thanked the fabulous group/choir & went my way till I arrived to Louis Armstrong Park, where I first visited Congo Square, place where the Houma Indians would get together to celebrate the harvest before the arrival of the French. 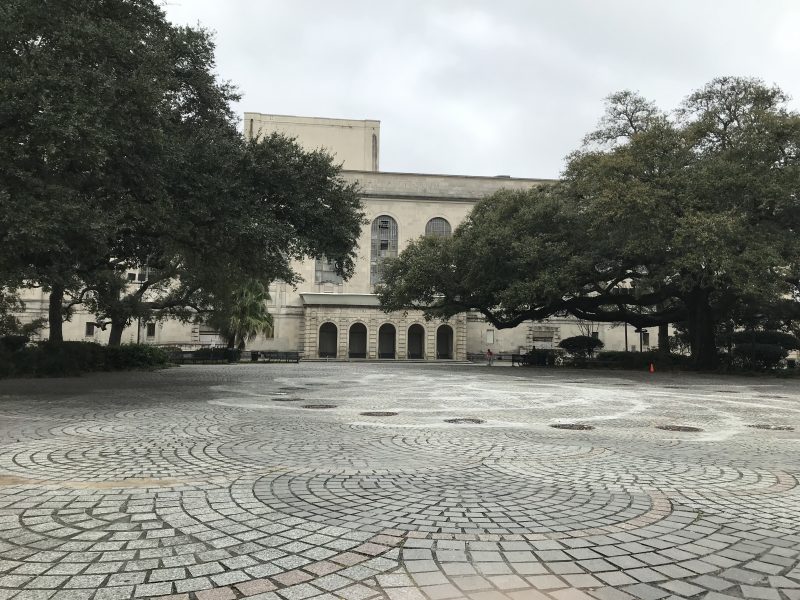 Later on, around 1740 the slaves would gather there & in 1803 it was already famous because they played drums, sang & danced every Sunday afternoon. This cultural expressions developed into the rhythms of the New Orleans jazz & blues we know today. 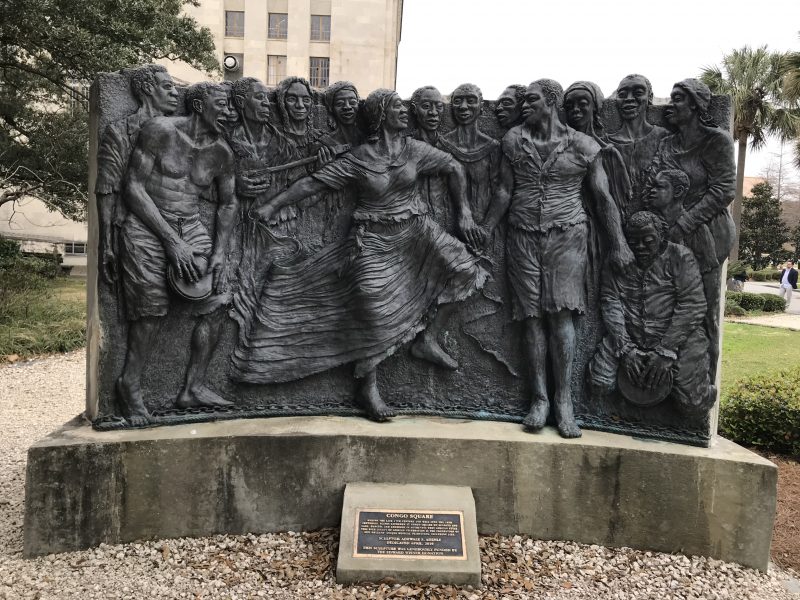 The park is named after the father of jazz, Louis Armstrong. 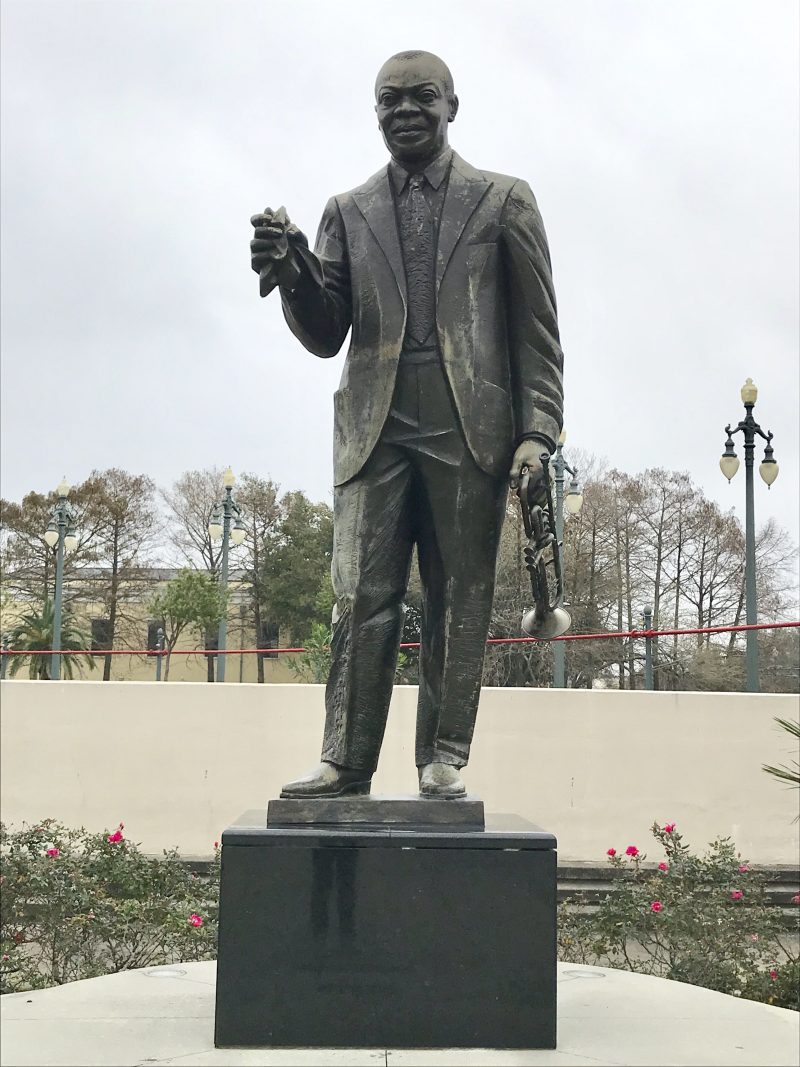 From there I entered the French Quarters where I found a few Mardi Gras decorations like this one.

Many of its buildings have a French & Spanish touch. Louisiana was once a Spanish province, & after the great fire the Spanish rebuilt it. 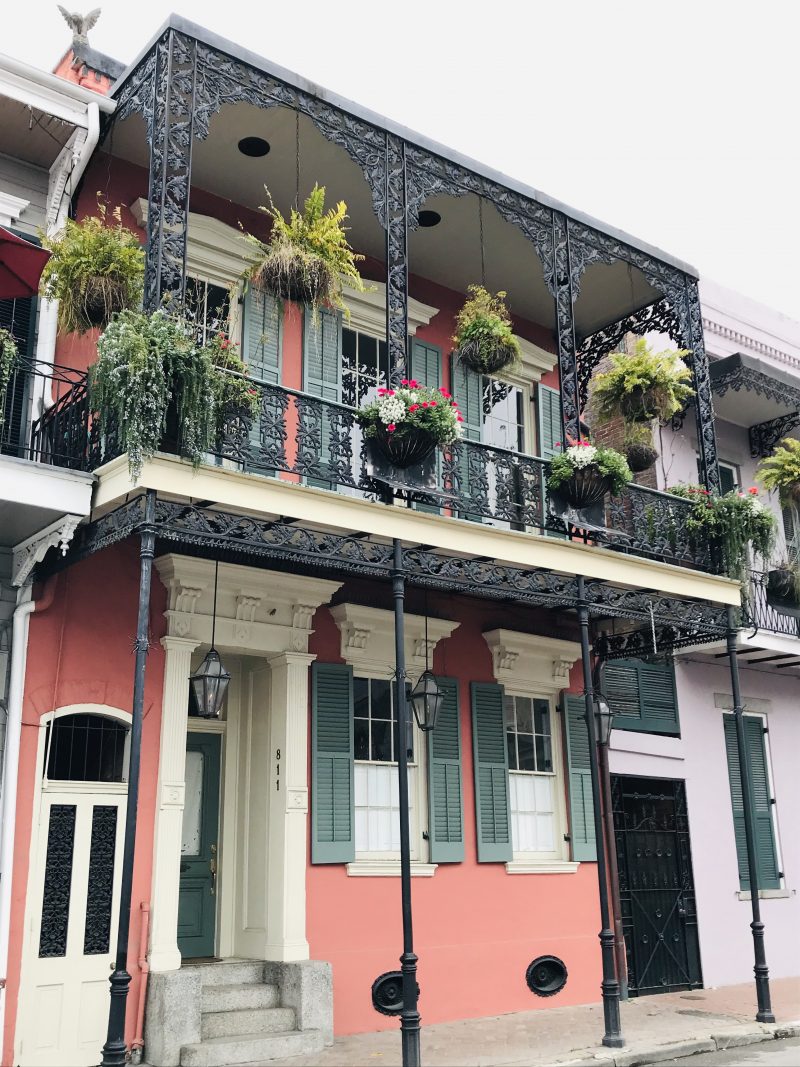 I arrived at Jackson Square or Plaza de Armas. Opposite the Saint Louis Cathedral, the oldest in the USA & one of the few Catholic temples in the country. 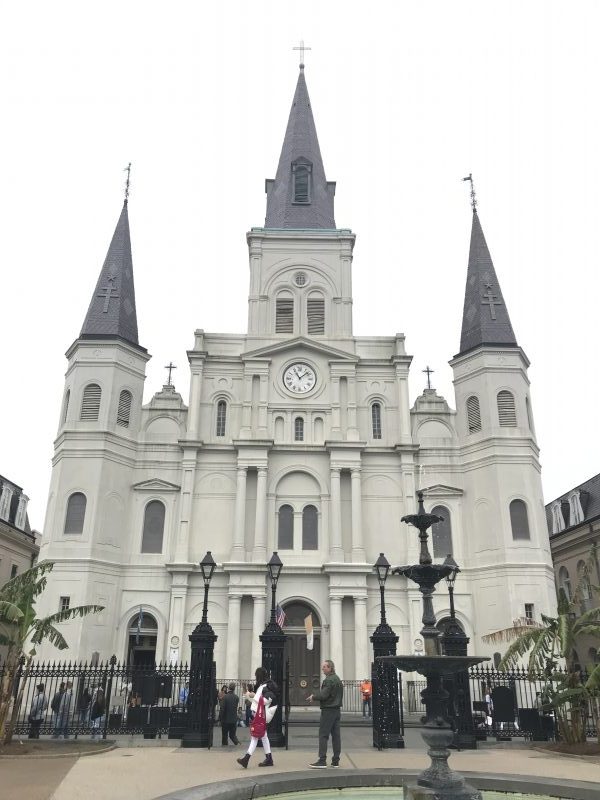 Next to it there is the Cabildo Museum. 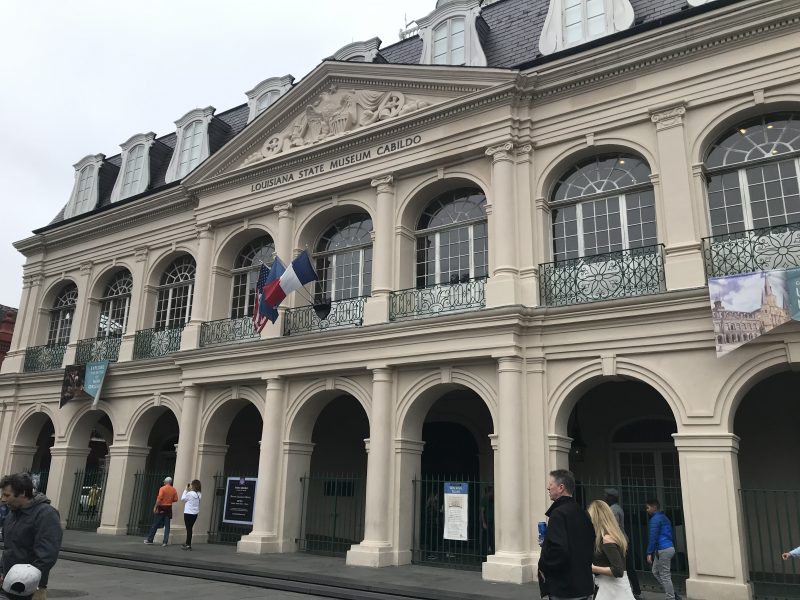 In the other corner I found a very common image, a group playing, in a balcony this time. This city oozes music from every corner & I am delight as I adore jazz! 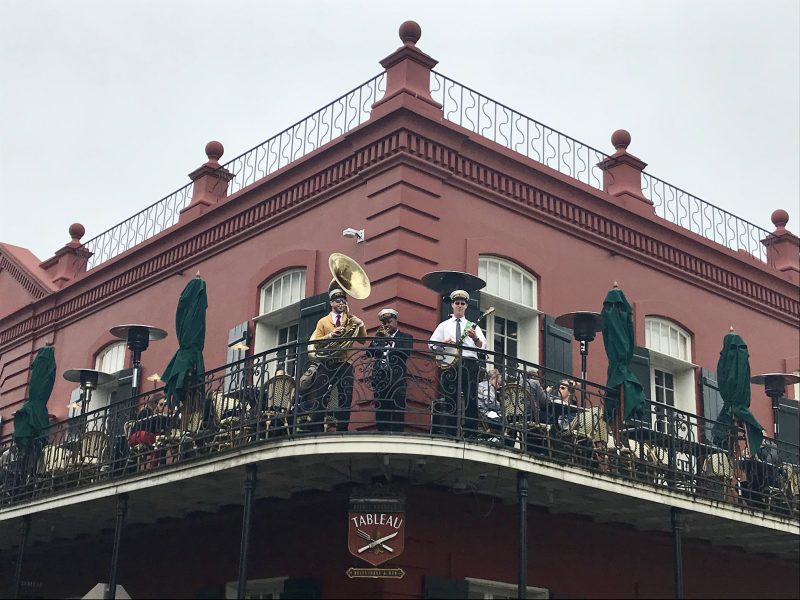 Right opposite the musicians, there is the Café Pontalba, where I decided to have some breakfast & try some creole delights, like the Cajun potatos, a bit hot & very nice. Sometimes there are not many veggie options in such typical places, but we adapt. By the way, Cajun is how they call the inhabitants of Louisiana as well as its French culture & cuisine. 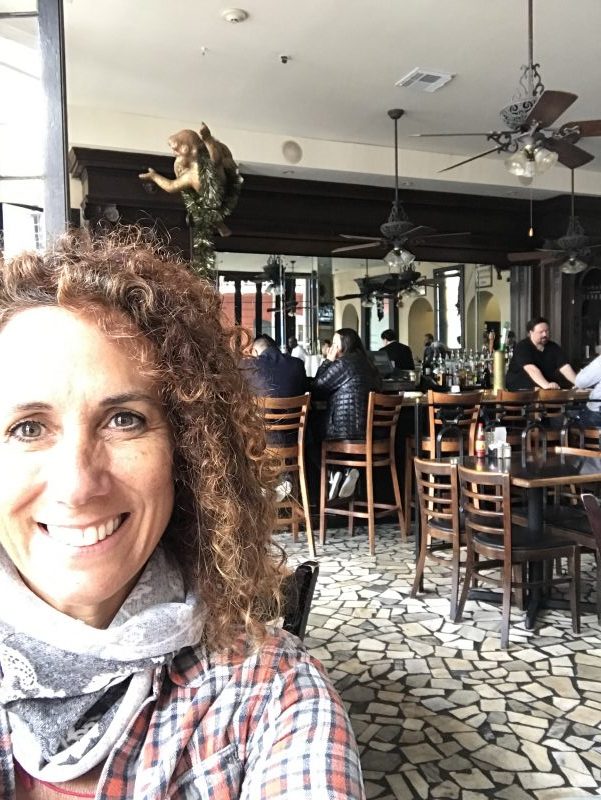 I carried on to the Mississippi River, which was only a few steps away, passing by the factory of their famous Jax beer. 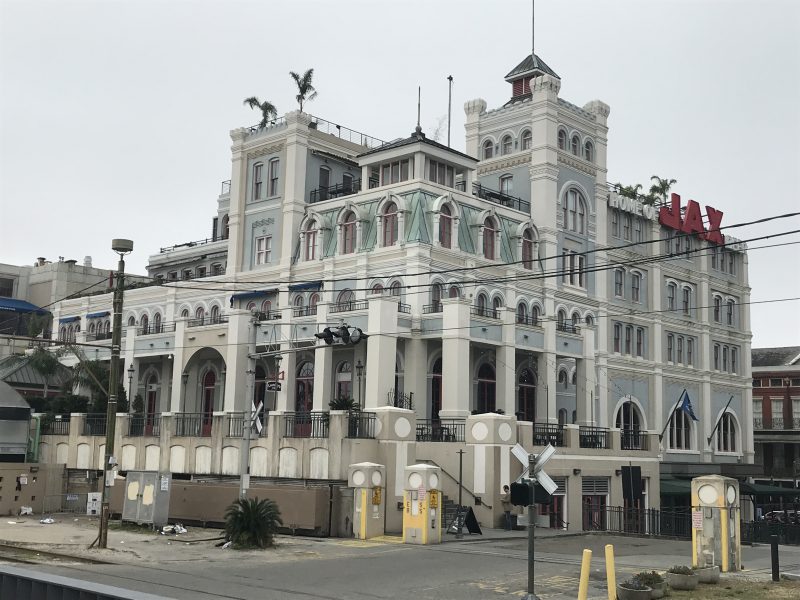 Near by there is the French Market & its legendary Café Le Monde, with a big queue, of course it’s Sunday, so I decided to continue my way. 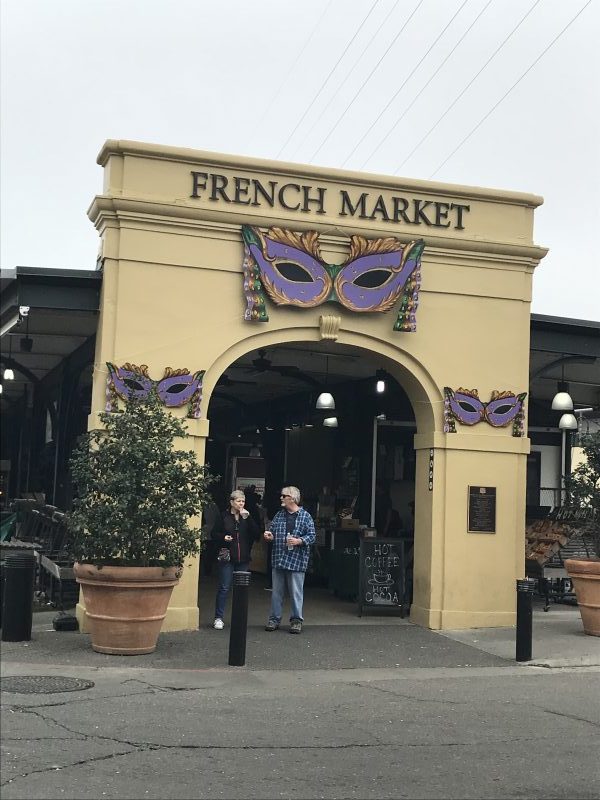 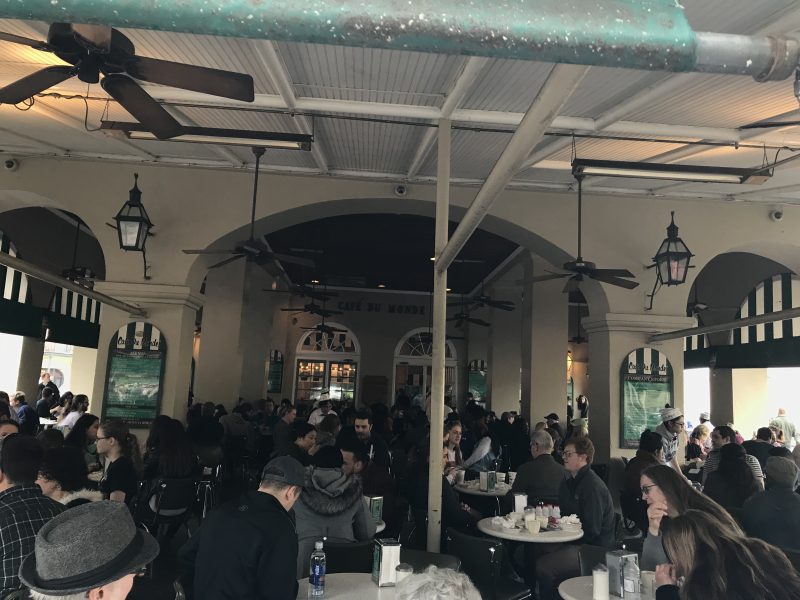 In the Frenchmen Street I found all types of characters, a very Carnival atmosphere. This street is ideal to go out at night, they say it’s better than the famous Bourbon Street & I agree. 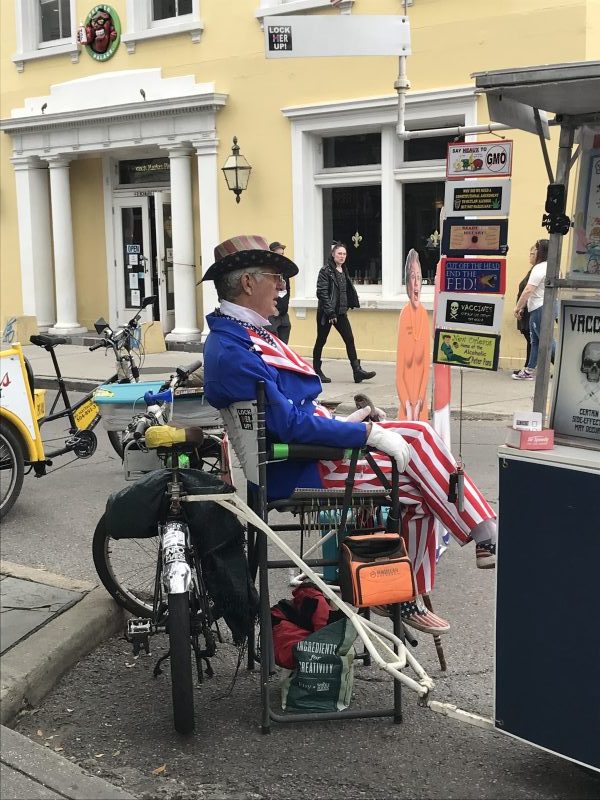 Within the French Market in Marigny I came across many little bottles of the famous Tabasco sauce, born in the south of Louisiana, the biggest producer of the world.

Strolling around I was able to admire the famous Southern “shot gun houses”. They are long, you go from one room into the other, without corridor. From the front door you can shoot a can in the garden (they tell the story with a chicken, but I’d rather let it live peacefully). 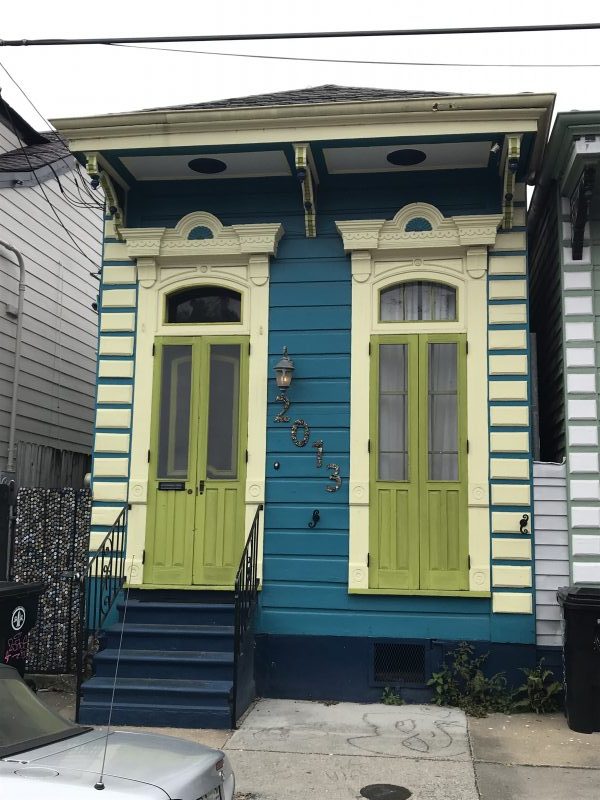 Exploring the French Quarters I found a lovely flea market in Royal Street, my favourite street. It also has many art galleries & musicians playing, it’s so lively!

At two o’clock I did a tour which took me to Treme, the creole neighbourhood where I could see many shot gun houses. It’s one of the oldest neighbourhoods of the city & where the first free coloured people settled, becoming the first Afroamerican neighbourhood of the country. 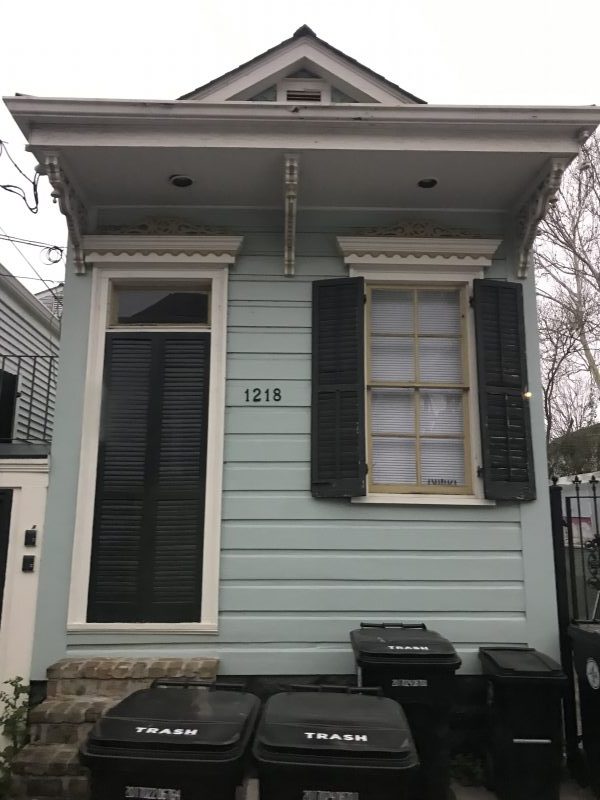 Near there is Seventh Ward, full of beautiful creole mansions. 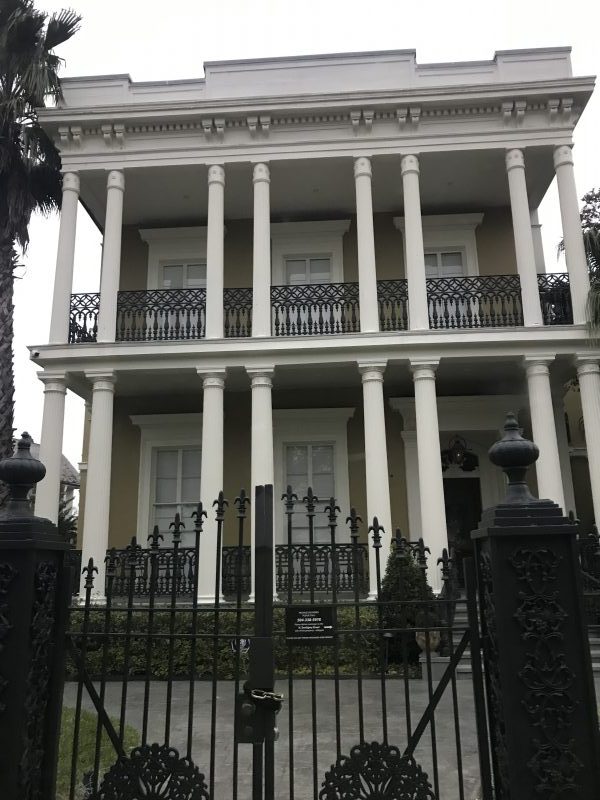 We eventually stopped at one of the most important cemeteries, Saint Louis number 3. They are very similar to the ones in Mallorca as they also bury above the ground. Number 1 is where Nicholas Cage has a pyramid-mausoleum & where the voodoo queen, Marie Laveau, seems to be buried. Here the voodoo, the ghosts, the spells & bewitchments are very present & a big part of their culture. 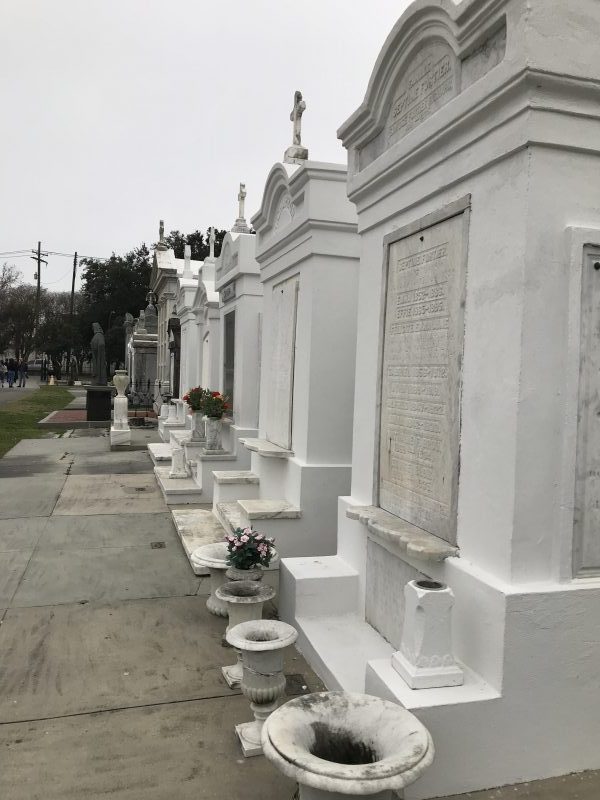 We toured around Central City, Touro, Lower Garden District & its great colonial mansions like the Bucker Mansion, made popular by the series “American horror stories” 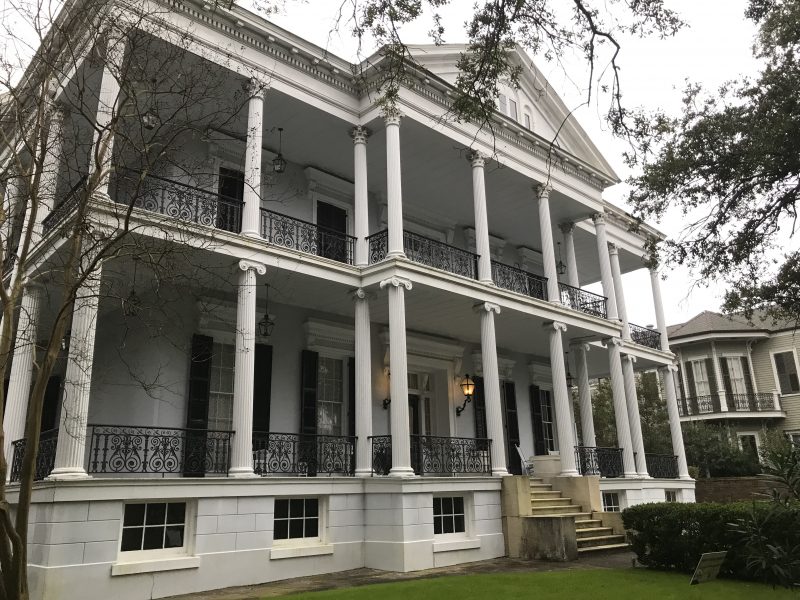 I am going to leave the rest of my stories about this city for my next post as I’d like to tell you about the first book of the Nobel prize winner Toni Morrison, “The Bluest Eye” where the idealized white supremacy is also synonymous of beauty. The nine year old Pecola witness great cruelty. Her lame mother loves the house she’s cleaning & despites her own, her father abuses her & gets her pregnant, her two little friends offer marigold seeds so the baby lives, but it dies. Pecola is obsessed with having blue eyes as she believes it’ll change the way she is seen. Morrison intertwines stories of incest, child abuse & racism offering us a startling end & reminding us how cruel racism is. 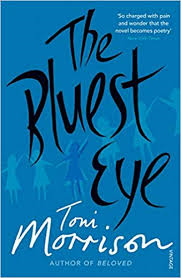