HomeEuropaThe ways to Rome take us to the Vatican.

Rome doesn’t fit in one post, so here it is another one where I start asking you, what state do we find inside this beautiful city? Yes, the Vatican, keeper of so much art which would leave anyone dazzling & fascinated. In our visit, my mom & I decided to take the bus from Termini station to go to visit it. We stopped right opposite the bridge that leads to the Castle of Sant’ Angelo. 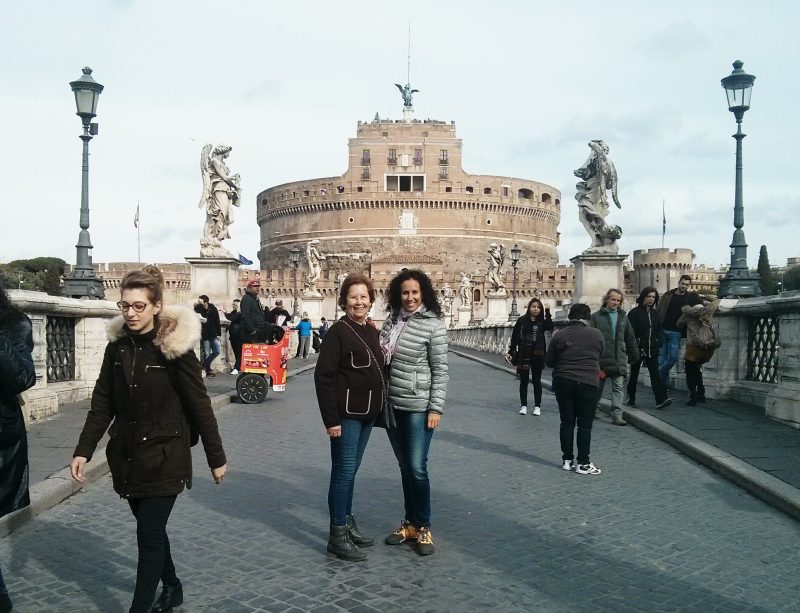 They also call it the mausoleum of Hadrian. It’s connected to the Vatican by a secret tunnel called Passetto, it was used for the Pope Clemens VII to take refuge during the siege of Rome. The castle is mentioned in Dan Brown’s novel “Angels & demons” as the see of the secret brotherhood, the Illuminati. 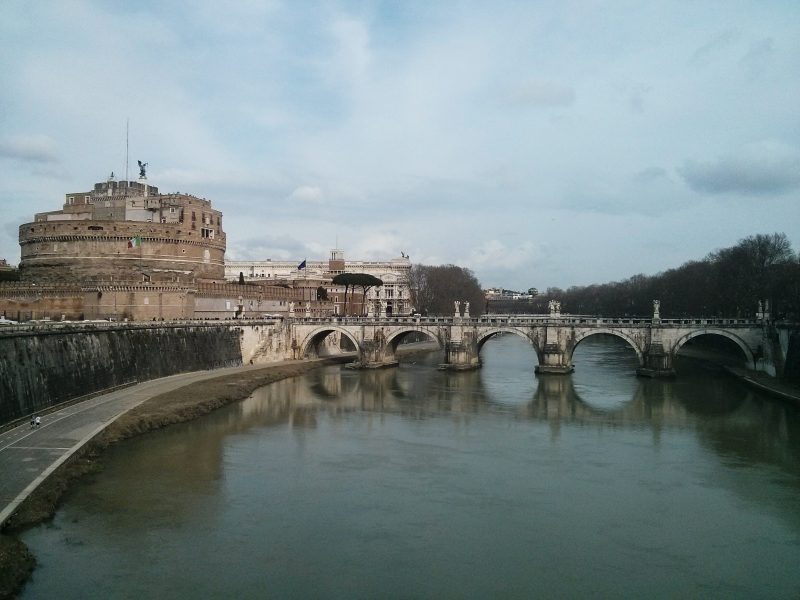 Upon our arrival they recommended us to do a tour, which we did & later on thought it to be the best of the ideas. If you do it they’ll tell you where many of the works are, sculptures & all the wonderful art that can be admired in the rooms of the Pope’s residence, & you won’t miss a single detail. There is a lot of richness to admire.

We headed towards an office outside the walls of the Vatican, we went for a little walk as it was still a bit early for the tour. 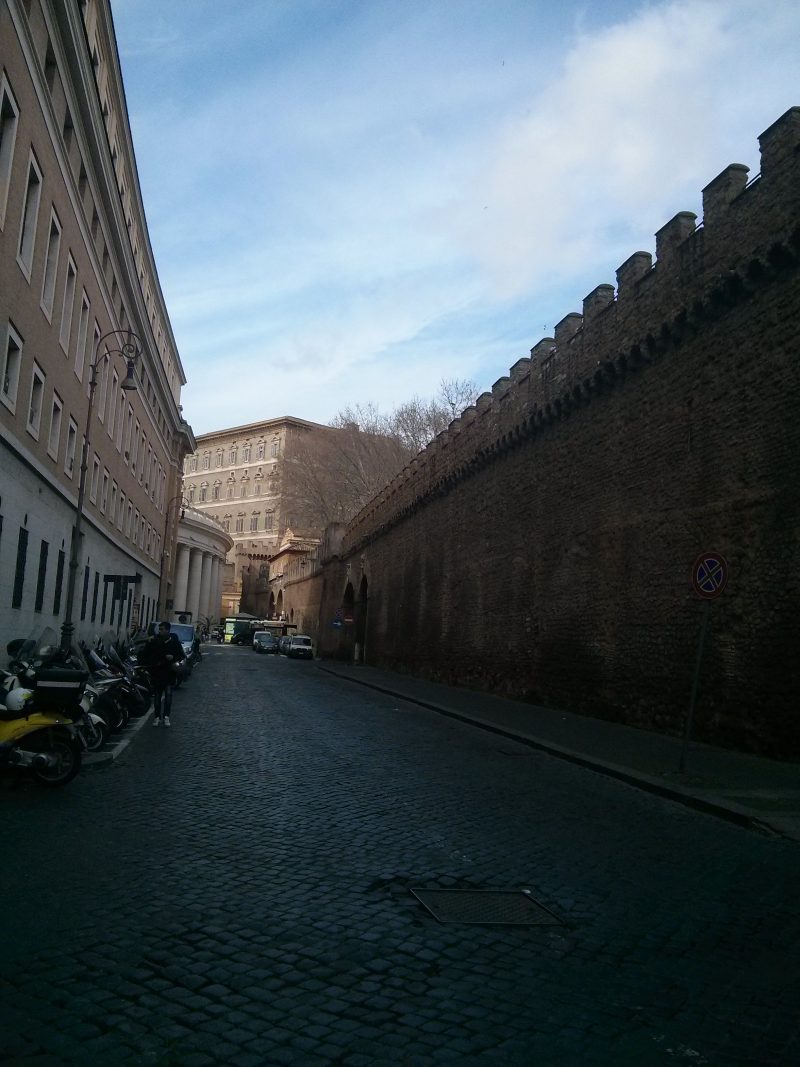 I found a Little & cute sample of street art, as you know, I love street art. 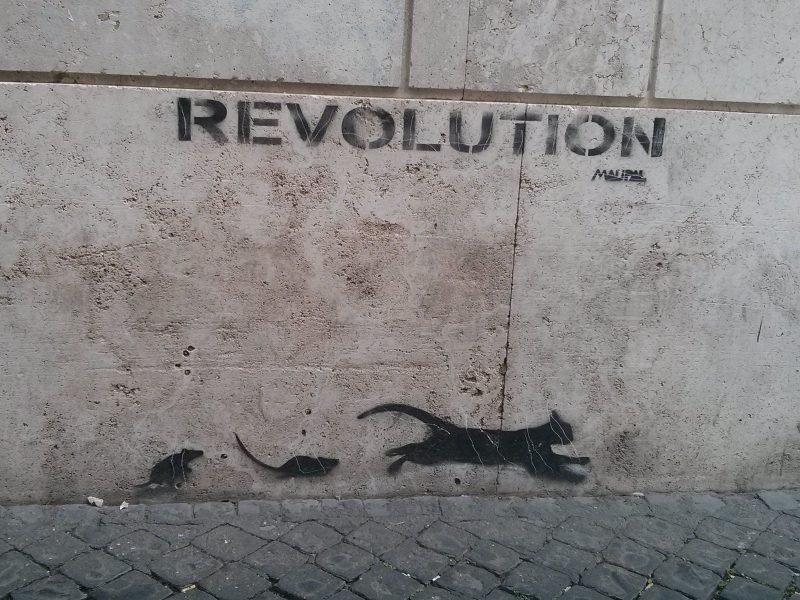 Another of the things we found nearby & thought them to be really curious & very cool were the drinking fountains. To be able to drink you have to cover the bottom hole in order for the water to run through the top hole. La mamma became an expert in keep hydrated. 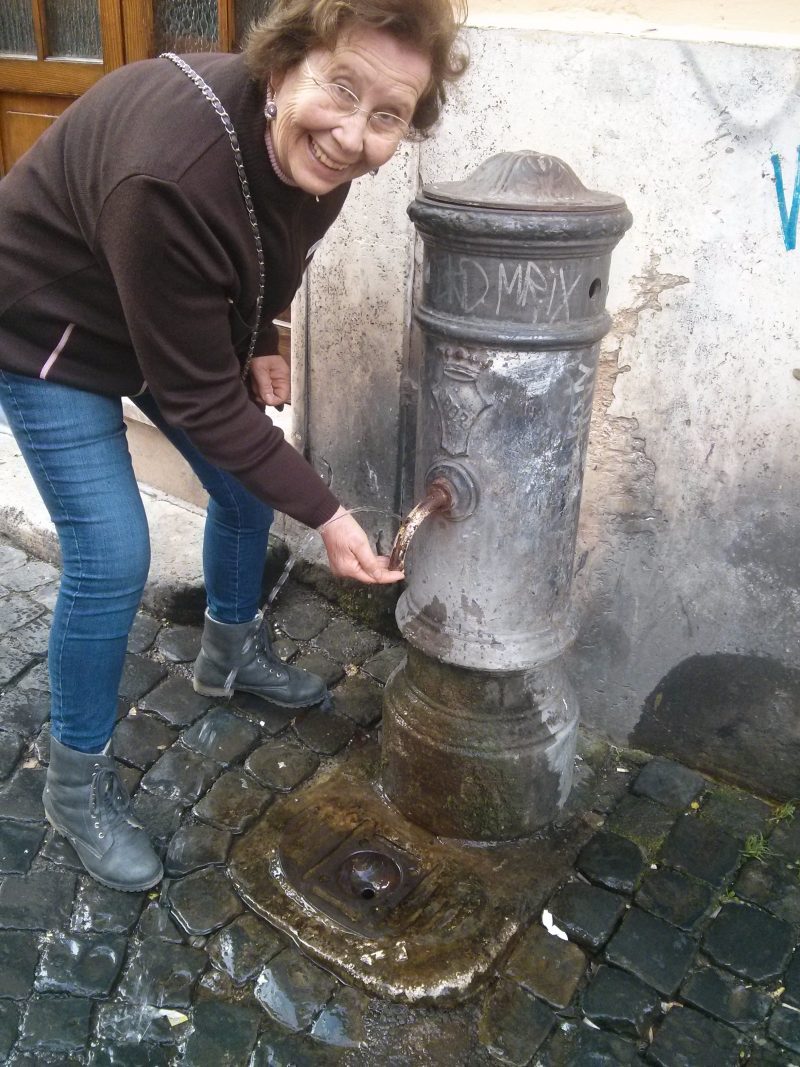 The moment for the visit came, we walked through the big Bernini’s Saint Peter’s square, there we could contemplate the big columns which surround it, its forty saints & the main obelisk.

When entering, we walked through corridors & rooms full of art and beauty. 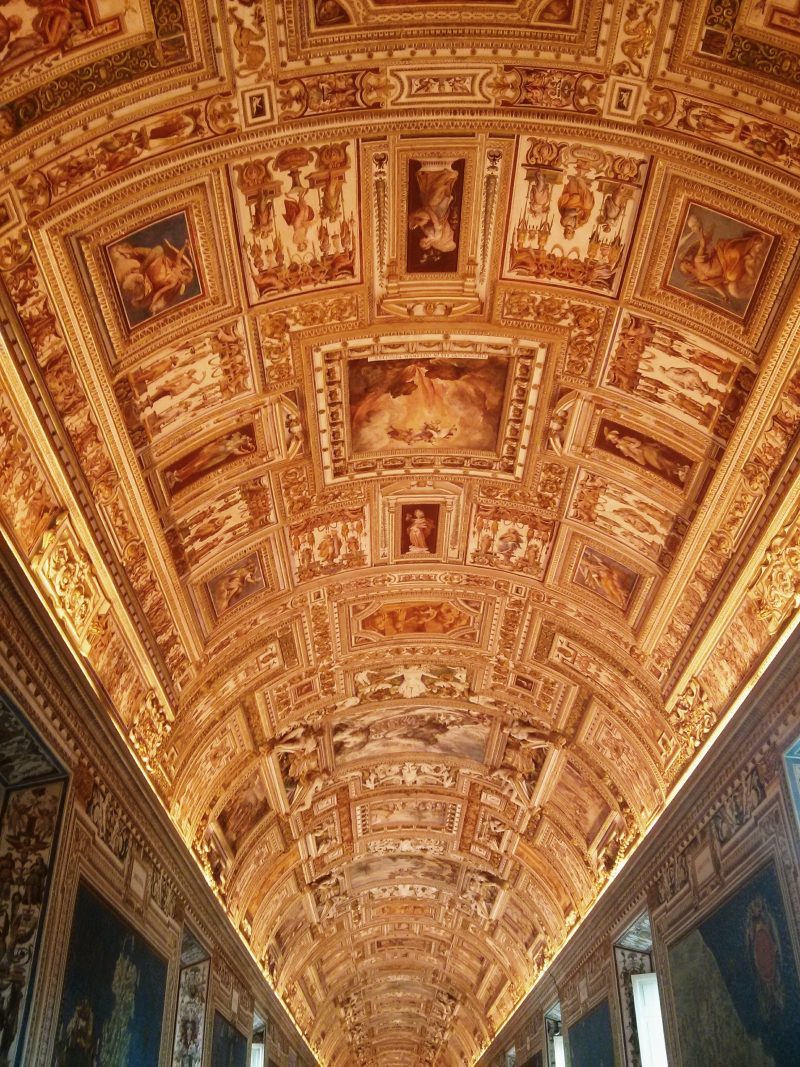 When we arrived at the grand Sistine Chapel our guide told us what & where we had to look, the meaning of many frescos, so we wouldn’t miss any details of its magnificence.

You’ll see with your own eyes that everything they say about its beauty is totally true, not even the Cambridge dictionary has enough terms to describe it. I imagined all those frescos darkened by the smoke of the candlesin the past, luckily after they were cleaned, they fully recovered their original colours so us, the lucky ones, could enjoy them.

We, of course, cannot visit this city & forget about the delicious pasta, the espresso cafe, or the popular drink they call spritz. All of it you’ll be able to enjoy in Trastevere, one of the best neighbourhoods for that & to go out at night too. It is full of lively restaurants in its narrow streets & piazzas, located near the river that bears its name.

On our way back we pass through an area I thought would be very interesting to visit, the Jewish Ghetto. It might be due to my fascination about this people o about what happened during WWII, but there we went. I realized every house where families who were taken to Auschwitz used to live, had, on the floor near the entrance, some golden cobbles with their names & the day they were taken. We got the goosebumps & I’m sure you would too. 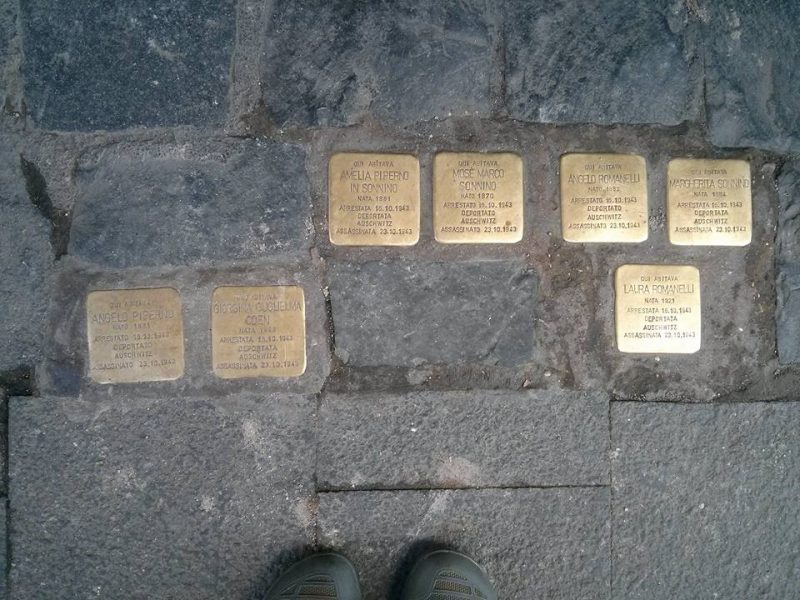 We arrived at the Synagoge, a two story temple. In its interior, besides being an important place of prayer for the Jewish community, we could see a very interesting museum about their religious customs which did also include a section about the Holocaust.

In the same neighbourhood you’ll be able to try what we thought to be manna from heaven, the artichoke cooked the Jewish style. Simply DELICIOUS.

Another curious custom they have in Rome is that when a baby is born, on their front door they place a mini blue or pink garland, depending on whether it’s been a boy or a girl, & their name underneath. Here is where Lucrezia was born. 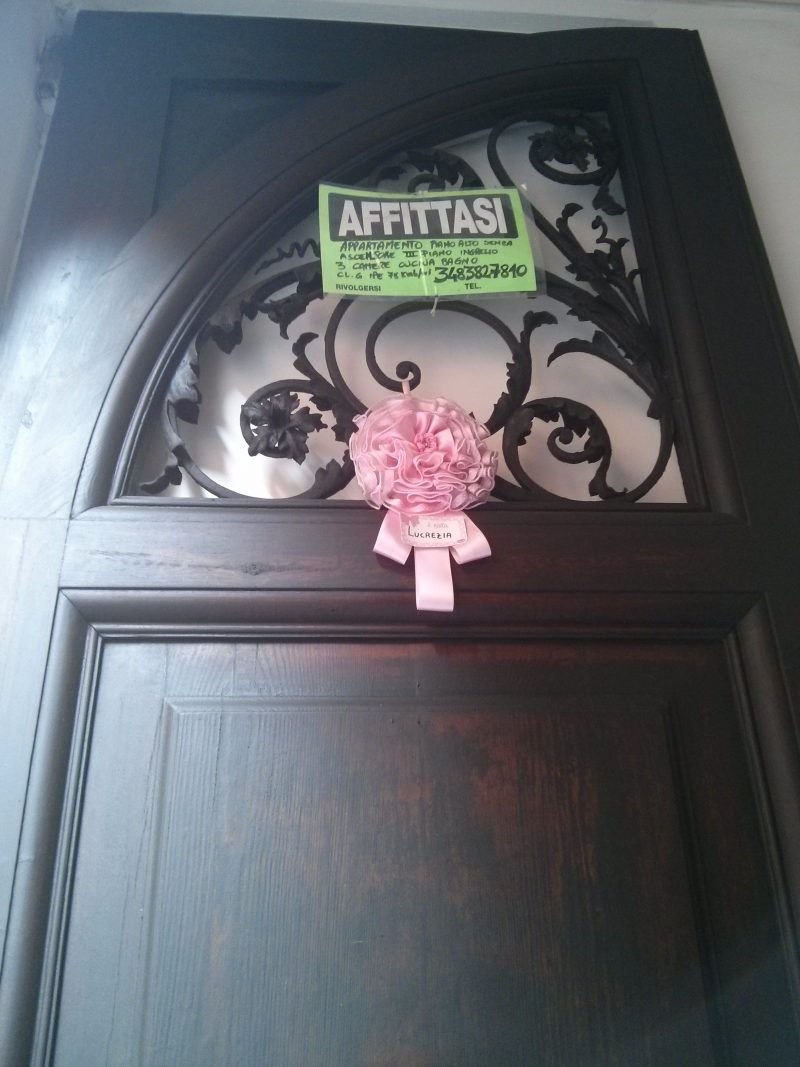 We visited Rome in a Jubilee Year, the tradition states that all the basilicas & churches open their main gates, so the sinners can cross them in their last step to achieve atonement. You know what they say, “when in Rome do what Romans do” so we did cross them too, Saint Peter’s & the one in Santa Maria Maggiore, another of the SUBLIME churches not far from our hotel. Now besides nomads, we are almost saints. 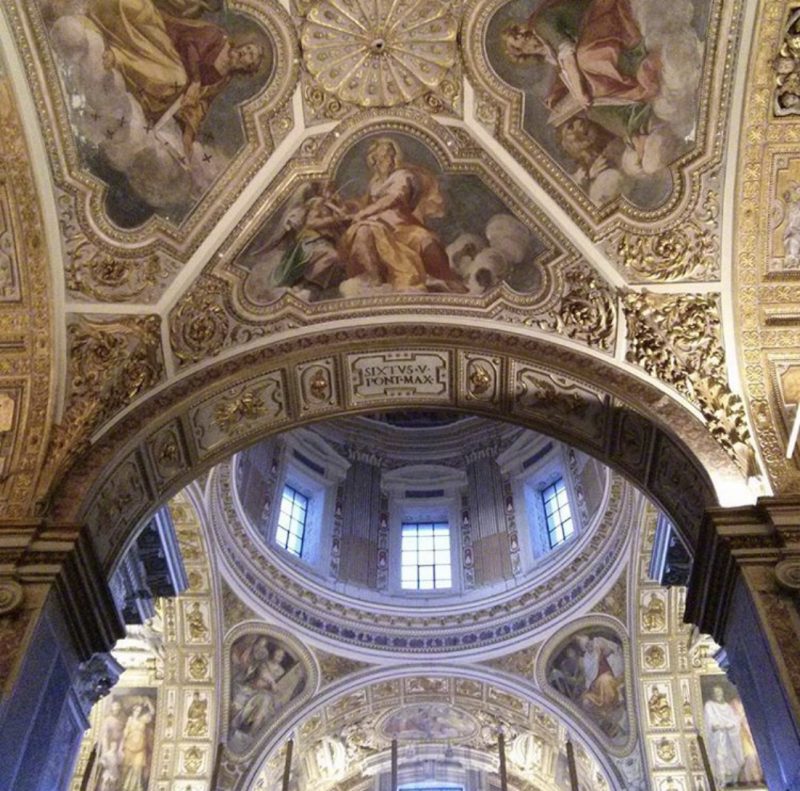 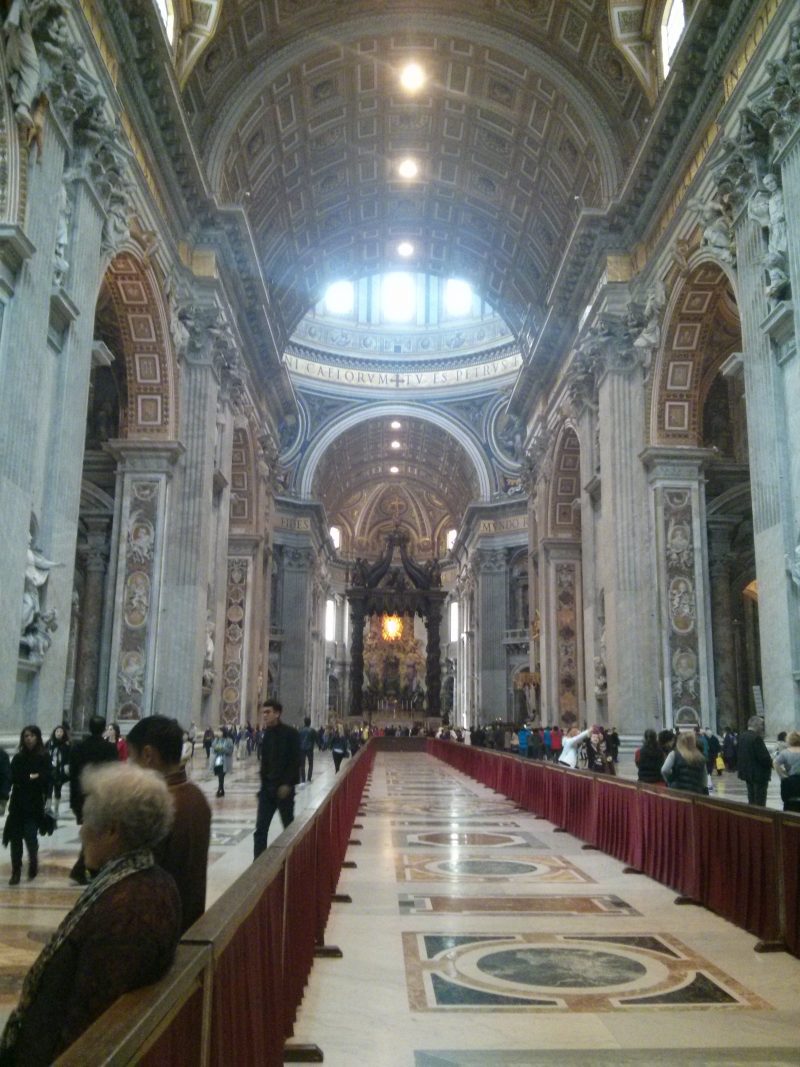 The book I’d like to share with you today cannot be other than they one I have already mentioned, “Angels & demons” by Dan Brown. A story that happens in one day only, where our well known Robert Langdon investigates about the cult called the Illuminati & a lethal weapon they are planning to use to destroy the Vatican. Brown, in his line of writing, surrounds Langdon with symbology awaiting to be deciphered. Meanwhile, the conclave is locked up deciding who the new Pope is going to be. In the days I read this book a new Pope was being elected in real life as well as in fiction, it was very interesting to read about what was happening before the white fumata indicated us that we had a Pope, habemus Papa. 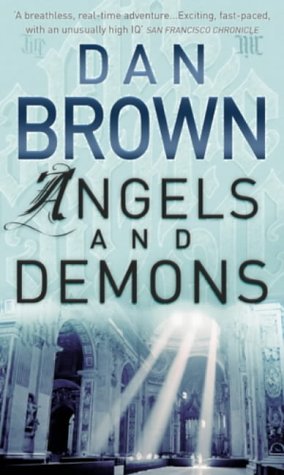 As I’ve already mentioned, Rome is a place full of art all around its piazzas, streets  or churches, a place where I’d like to go back to continue enjoying all the corners that remain for me to explore, so let’s prepare another trip nomads!