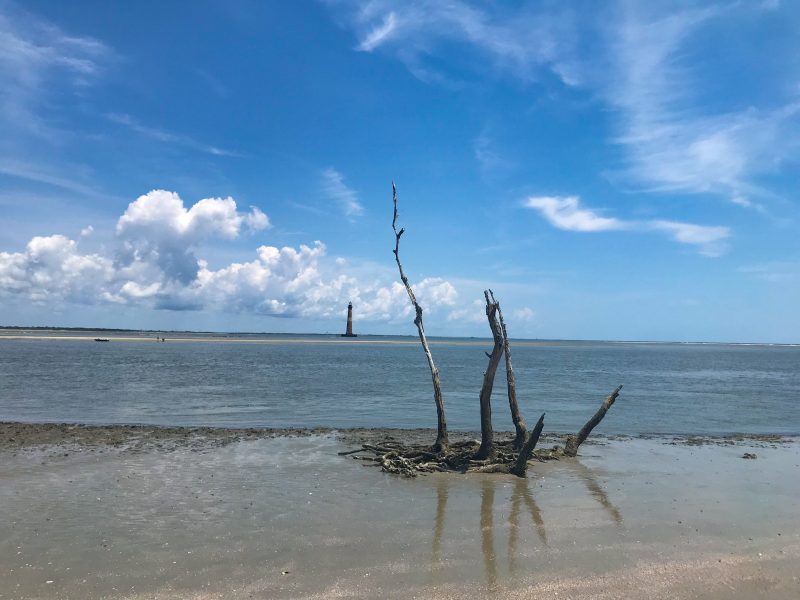 As Charleston is located on the coast it has many beaches, islands & rivers worth exploring.

One morning the Four Fabulous accompanied by two knight-errands went to Folly Beach, crossing the Ashley River, passing on James Island, arriving to the beach bathed by the waters of the Atlantic Ocean, which is only twenty minutes away by Uber from the city center. 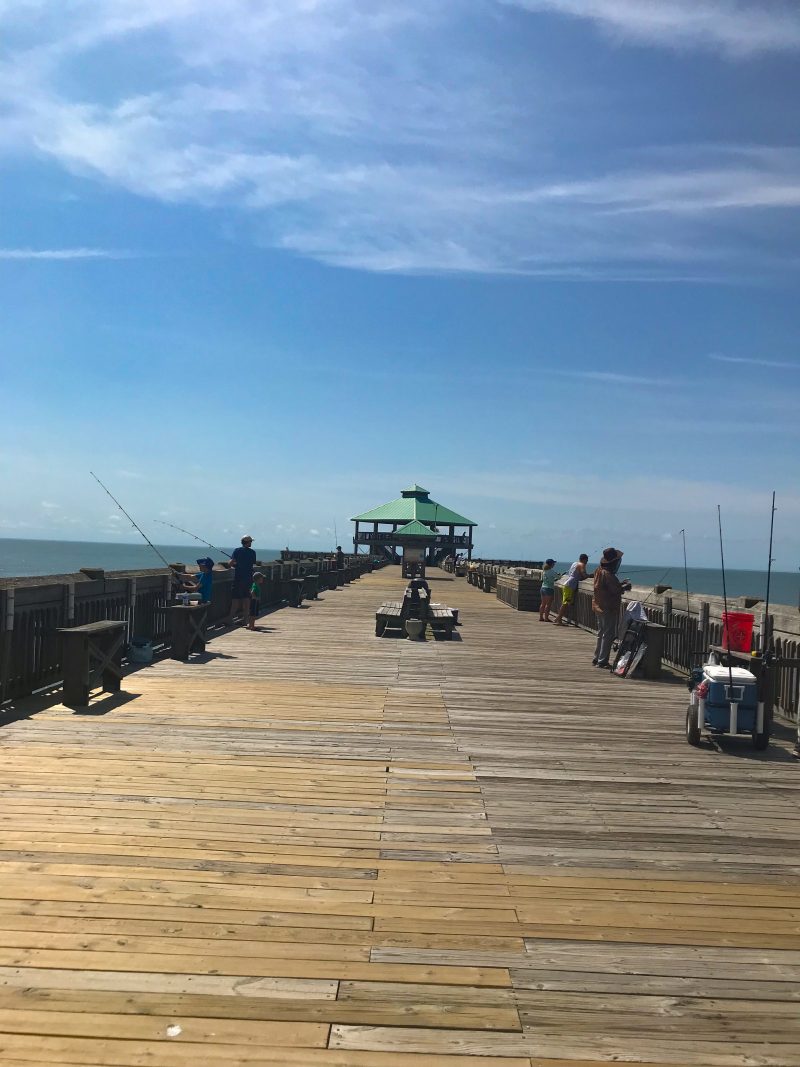 Once there we walked  on its very long pier, from there you can fish, but not sharks, said the sign. 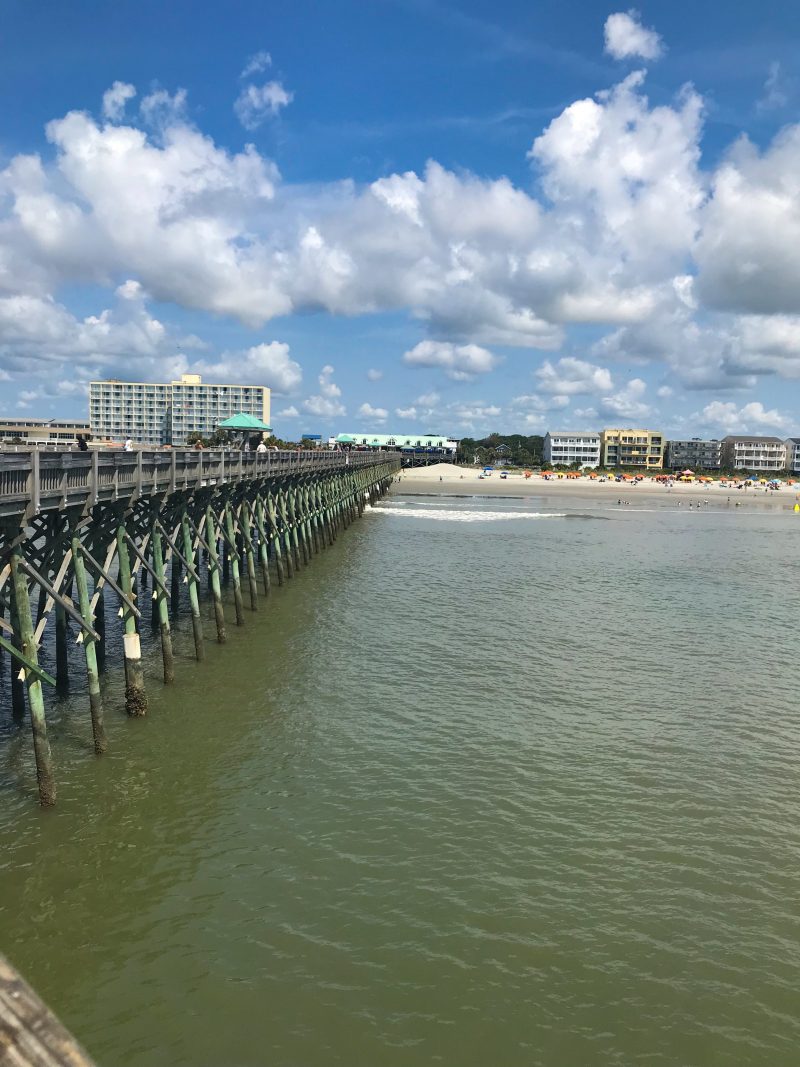 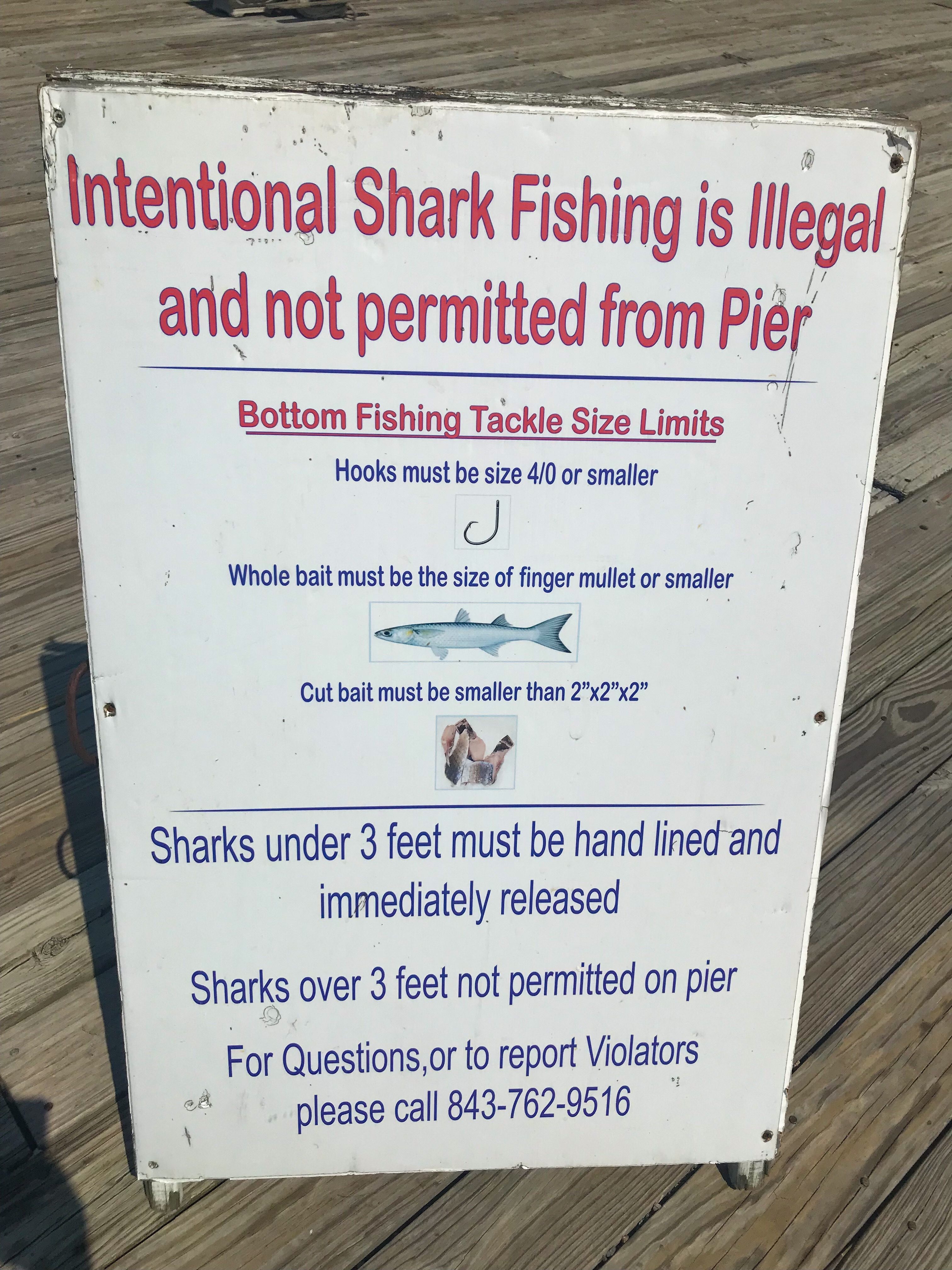 The beach is immense, we couldn’t see the end of it. It has become a very popular spot for surfers with many business dedicated to that, as well as bars & restaurants to spend a nice day. 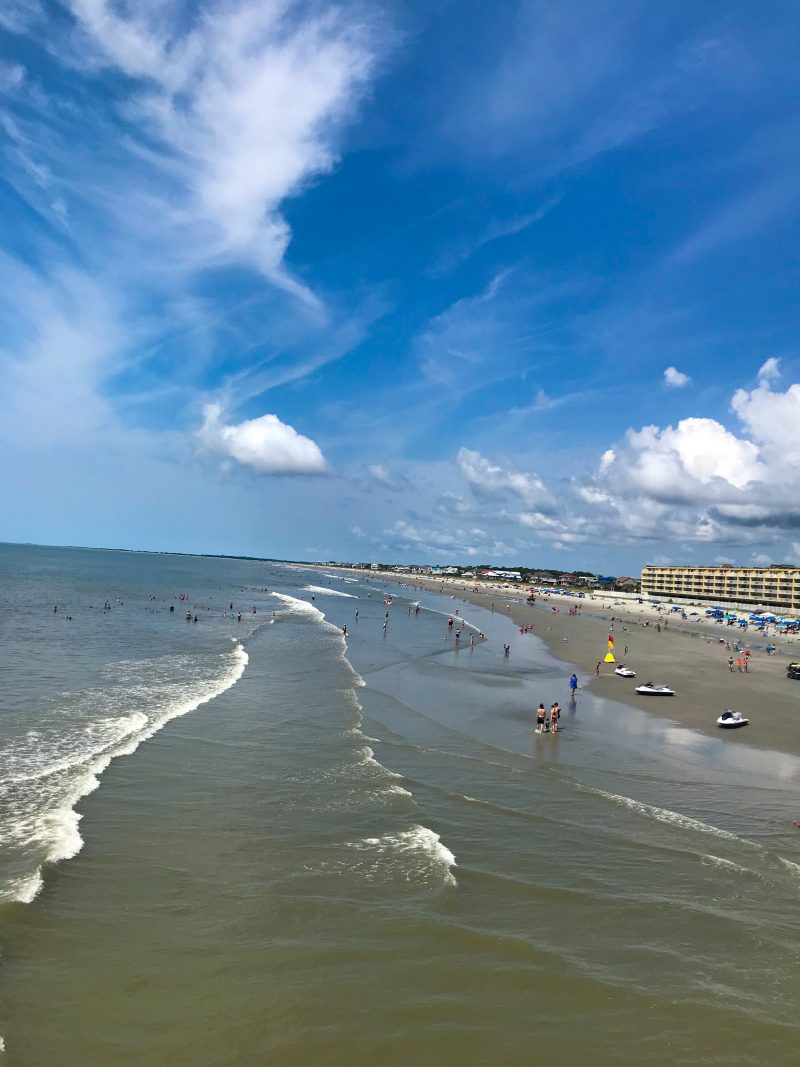 The girls wanted to chill & have a swim in the sea, I wanted to visit the lighthouse Derek had mentioned. So he & I went to rent a bicycle to go exploring. They were the best spent $10 of the week.

The guy in charge of the bikes was a real character, he provided us with bicycles with no breaks, we had to use the pedal to stop. As my friend Emilio knows, I still get confused when it comes to changing gears, so I was really happy with this cycling novelty. 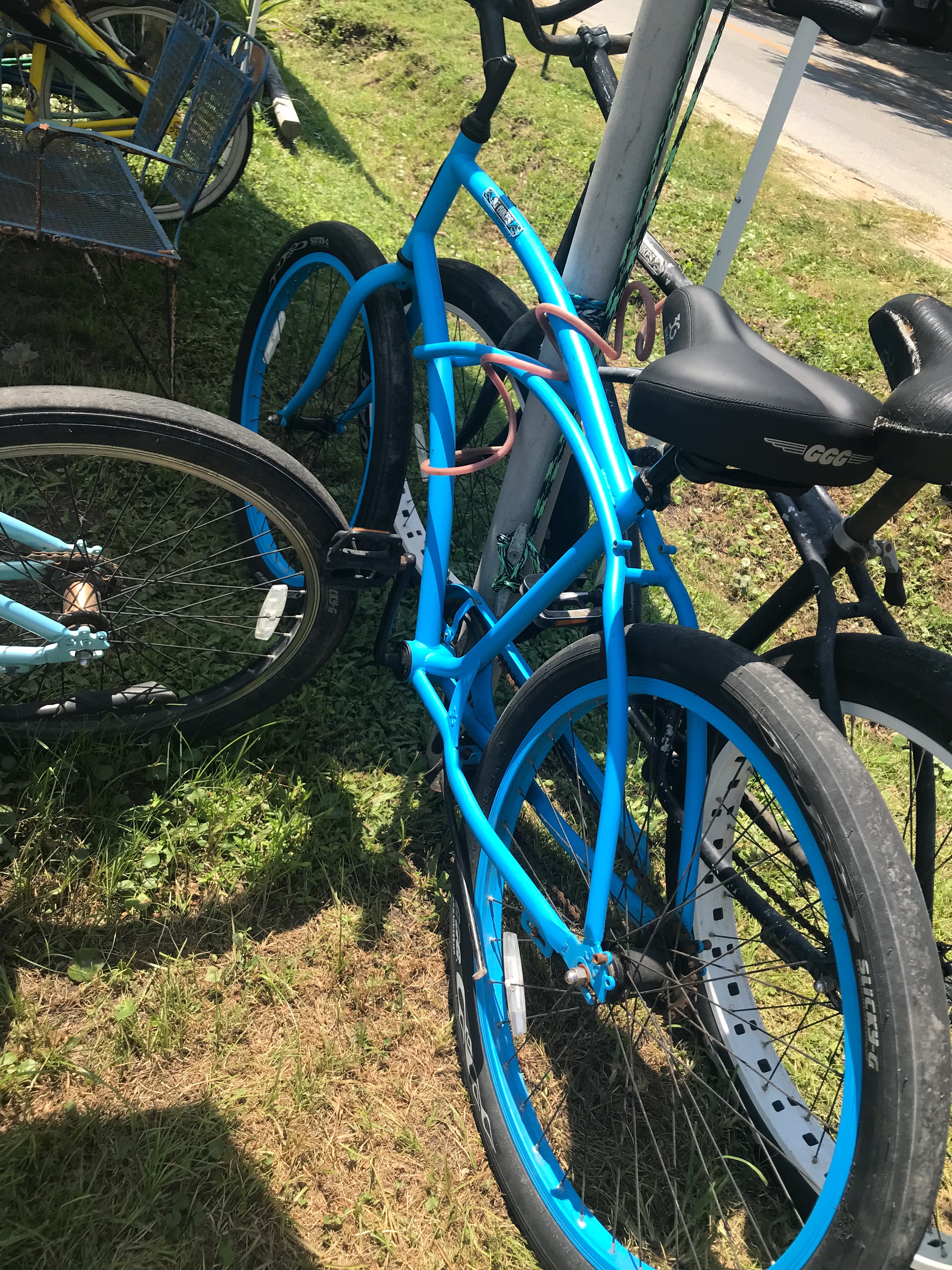 In the middle of the day & the heat we headed for the Morris Island Lighthouse. I was expecting a lighthouse at the end of the beach, but no, for our surprise it wasn’t. 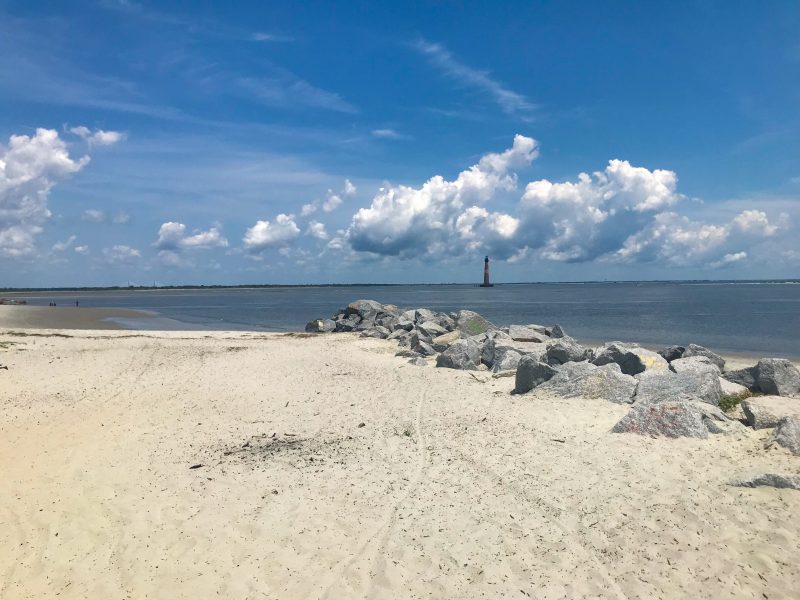 When we arrived we saw sea, sand banks, mangroves, & no one else but us, nature in its pure form. We tied the bicycles & started walking. 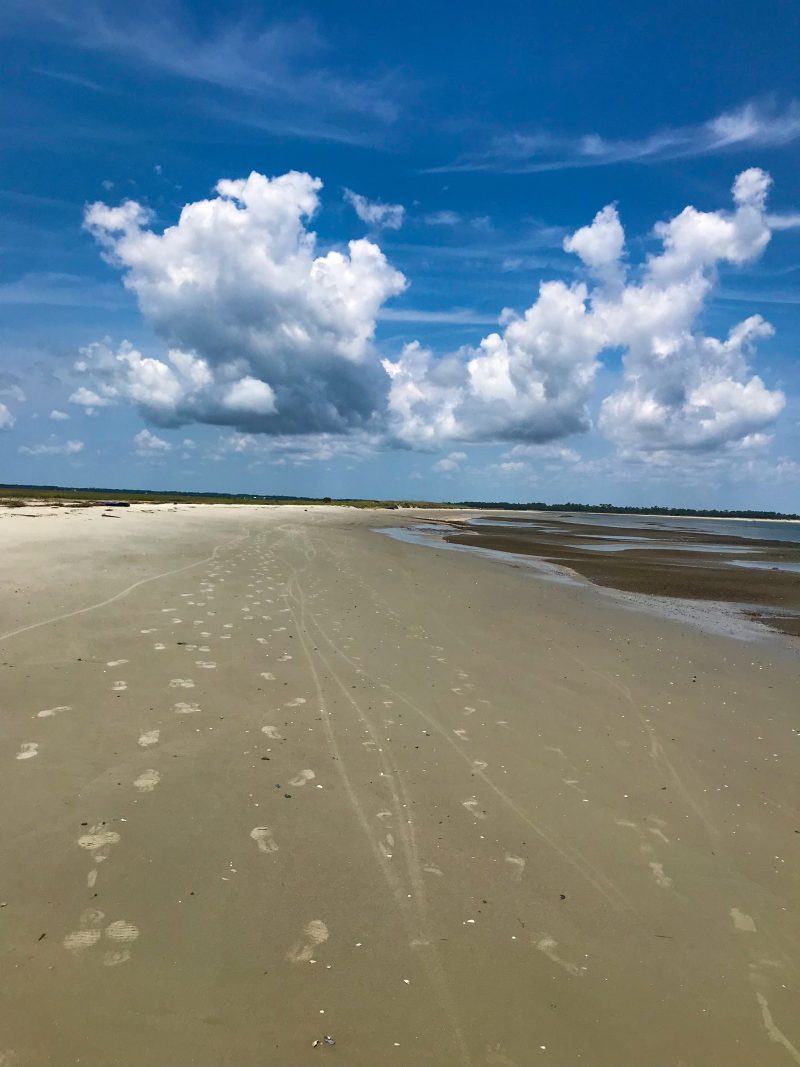 The lighthouse was in the water, depending if the tide is low you can walk to it,  bearing in mind that if it goes high you might not be able to come back; you can also go by kayak or little boat. 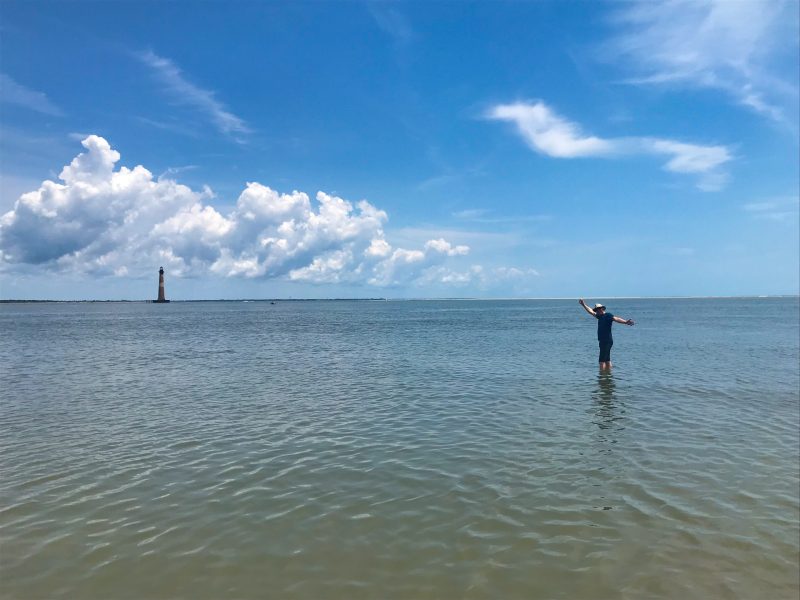 We went for a walk & met a family who were fishing the typical blue Carolinian crap. I would’ve set them all free, I felt sorry for them. They were so beautiful, that intense blue surprised me. 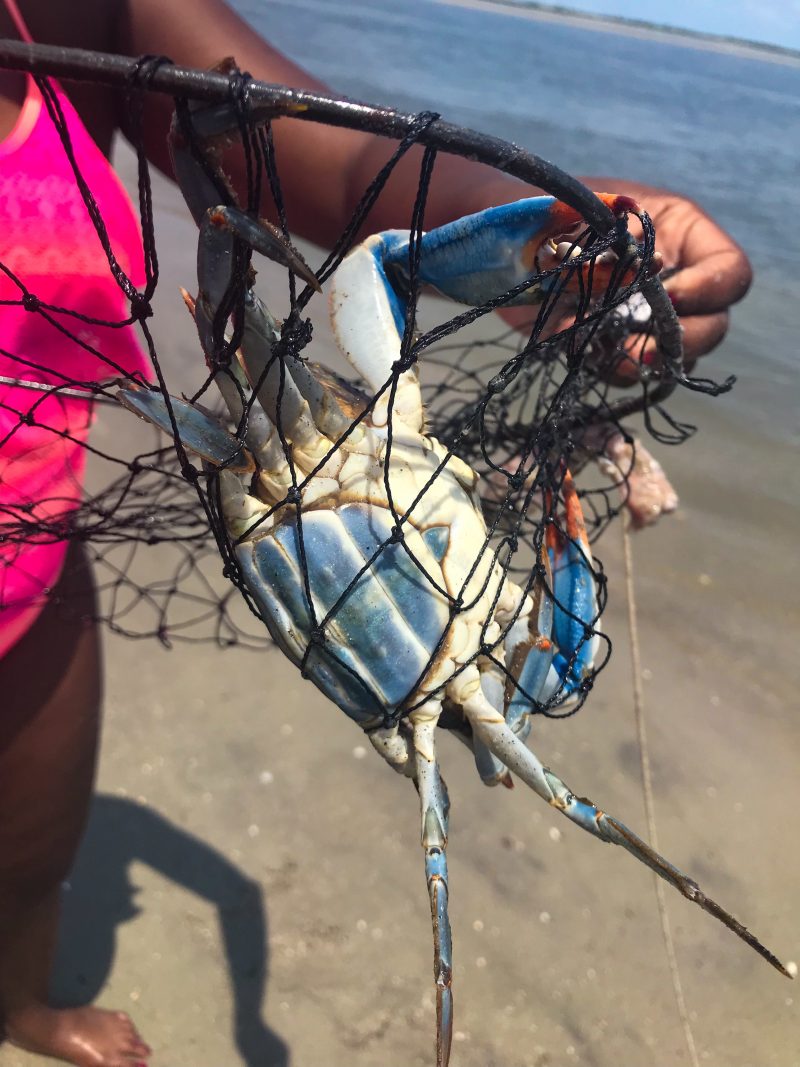 We carried on & bumped into a fisherman who’d caught a local fish, he showed it to us setting it free afterwards, due to its small size. We thought it was a blowfish that didn’t have time to blow to protect itself, with us there was no danger, although it bit the fisherman, fish are so clever! 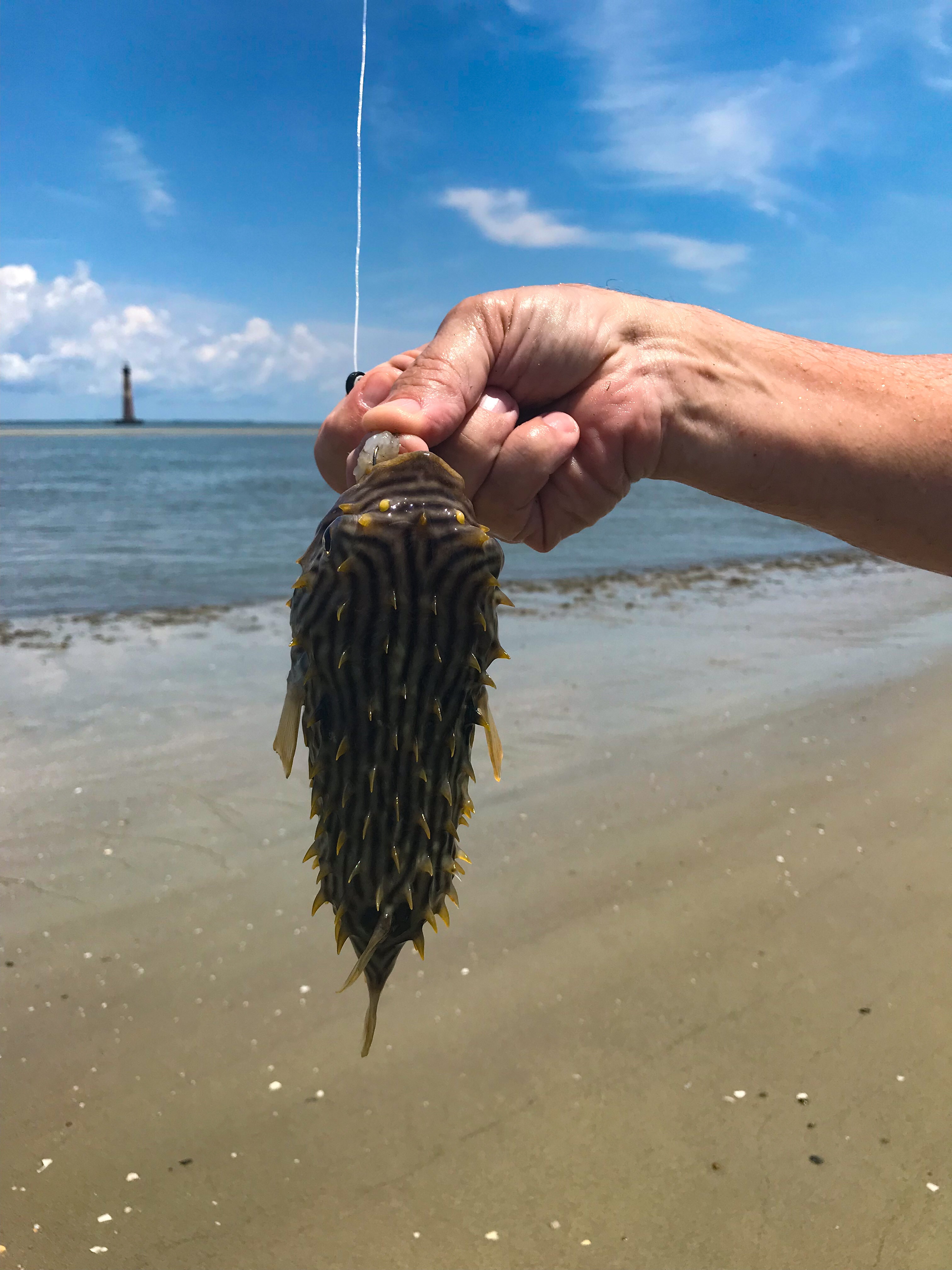 All of a sudden we saw something wonderful, one of those scenes you only see on National Geographic, dolphins circling fish against a sand bank till suddenly, pum! they jumped, coming out of the wáter to catch them, going straight back into the sea to carry on circling to trap them all over again, impressive! 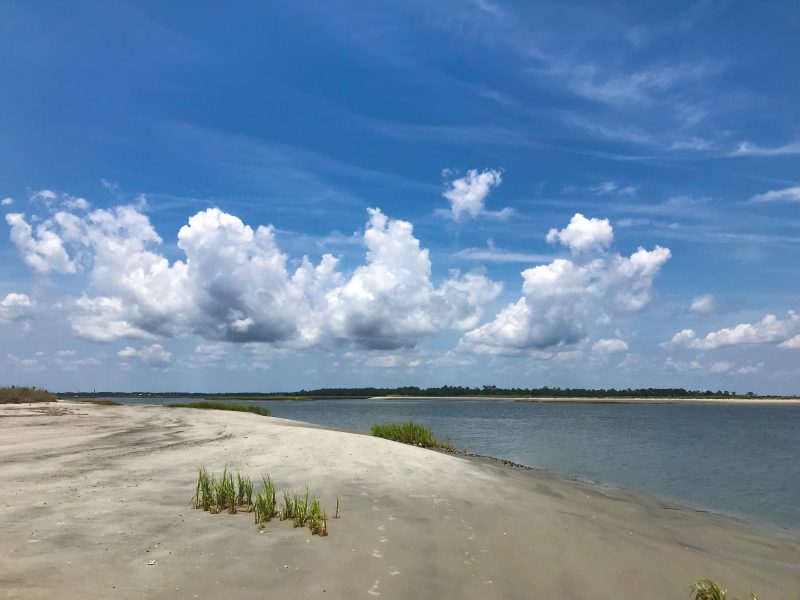 After a couple of hours of enjoying the place we came back. I run out of water in that heat, luckily as you enter the little path that leads to this beach, there’s a sign with a faucet where I was able to refill the travel bottle I use to avoid single use plastic.

We came back cycling. Half way there met the owner of the bikes who told us to leave them with the others, so we did, just like a friendly village type of place. We went to get our friends to have something to eat in a restaurant on top of the pier.

After spending a wonderful day in front of the sea & its beauties, it’s only left for me to recommend you a book. I couldn’t think of a better one than one by the American writer, Ernest Hemingway & his classic & probably best known book “The old man & the sea”. This book is very special to me as I lent it to a fisherman who couldn’t stop reading it till he finished it. The same as old Santiago, who decides to go fishing after almost three months without catching anything. So there he goes alone on his boat, persevering after having caught an enormous piece,  he fights against the massive merlin, never giving up, not even before the elements & predators which want to take away his precious catch. He perseveres, in those three days & nights, while he remembers his life, his luckier days in the sea. He also remembers the young Manolín who’s always helped him & to whom he taught the art of fishing.

Santiago arrives at port defeated, leaves his boat & goes home to rest. In the morning the whole village witness the magnitude of the fish, when only its remains are still tight to the old & tired fisherman´s boat who fights to go back fishing without having the Goddess of Fortune by his side. Will he go back in the sea? Was this one his last feat?

Dedicated to P. a fisherman who now navigates in celestial waters. 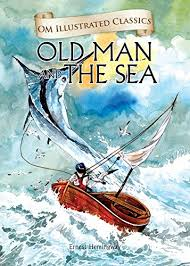